Watchmen or DC Comics: Which Reality Has Had It Worse?

Adrian Veidt wakes up in the hospital at the mention of the Man of Steel.Image: Gary Frank, Brad Anderson, and Rob Leigh (DC Comics)

One universe saw New York ravaged by a giant tentacled psychic horror, the other has beacons of hope like Superman and Wonder Woman. That might make you think the question that Adrian Veidt, Watchmen's Ozymandias, has on his mind in this week's issue of Doomsday Clock has an easy answer, but as with so many things with this DC Comics/Watchmen mashup series, not everything is quite so simple.

Doomsday Clock - by Geoff Johns, Gary Frank, Brad Anderson, and Rob Leigh - is set in grim times for both the world of Watchmen and the wider DC universe. Veidt's horrifying monster attack on New York at the end of Watchmen bought just a few years of peace for Earth (and left some awful scars on the survivors of the event), which has once again fallen under the grim shadow of nuclear war and stands on the brink of total destruction.

The DC universe painted by Doomsday Clock, meanwhile, is in the middle of a moral crisis. The superhero community is rocked by the explosive accusations of a "Supermen Theory," which posits that the American-born metahumans of the world are secretly government experiments designed to give the United States an unbeatable edge on the global stage.

Although it's mainly been painted in around the edges of the series in comparison to its examination of Watchmen's reality in a post-Dr. Manhattan world, an ugly side of the DC universe comes bubbling out to the fore in Doomsday Clock #5. 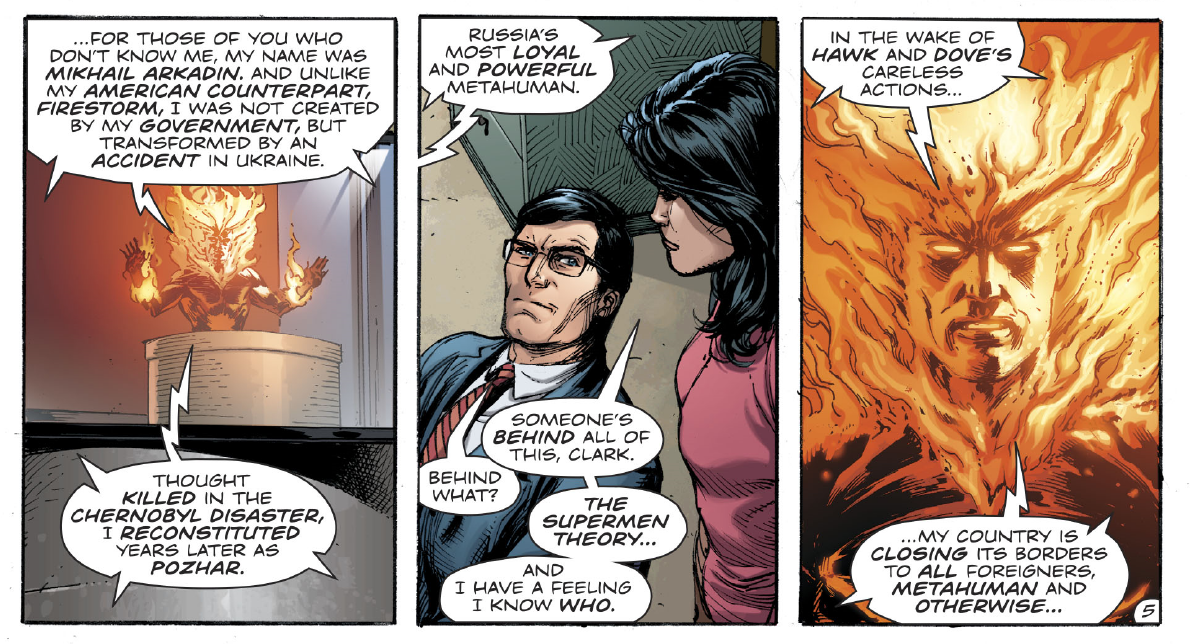 Riots against the vigilantism of heroes like Batman have plunged Gotham into chaos and the Justice League and the myriad heroes of the world are publicly mistrusted.

International incidents have put the world on the brink of a new military crisis in the Middle East that could become a global war as messy as the one currently enveloping Doomsday Clocks' vision of the Watchmen world.

Which world of costumed heroes is better off becomes a much murkier question when Adrian Veidt finally encounters Batman in Doomsday Clock #5, and puts that question to the Dark Knight after Batman reveals he's learned all about the horrors of what Veidt did thanks to Rorschach's journal.

In turn, Veidt needles Batman about his own priorities: What have the heroes of DC's Earth actually done to better the world, beyond being locked in an endless cycle of duels and incarcerations with the criminal elements that have risen up to match them? 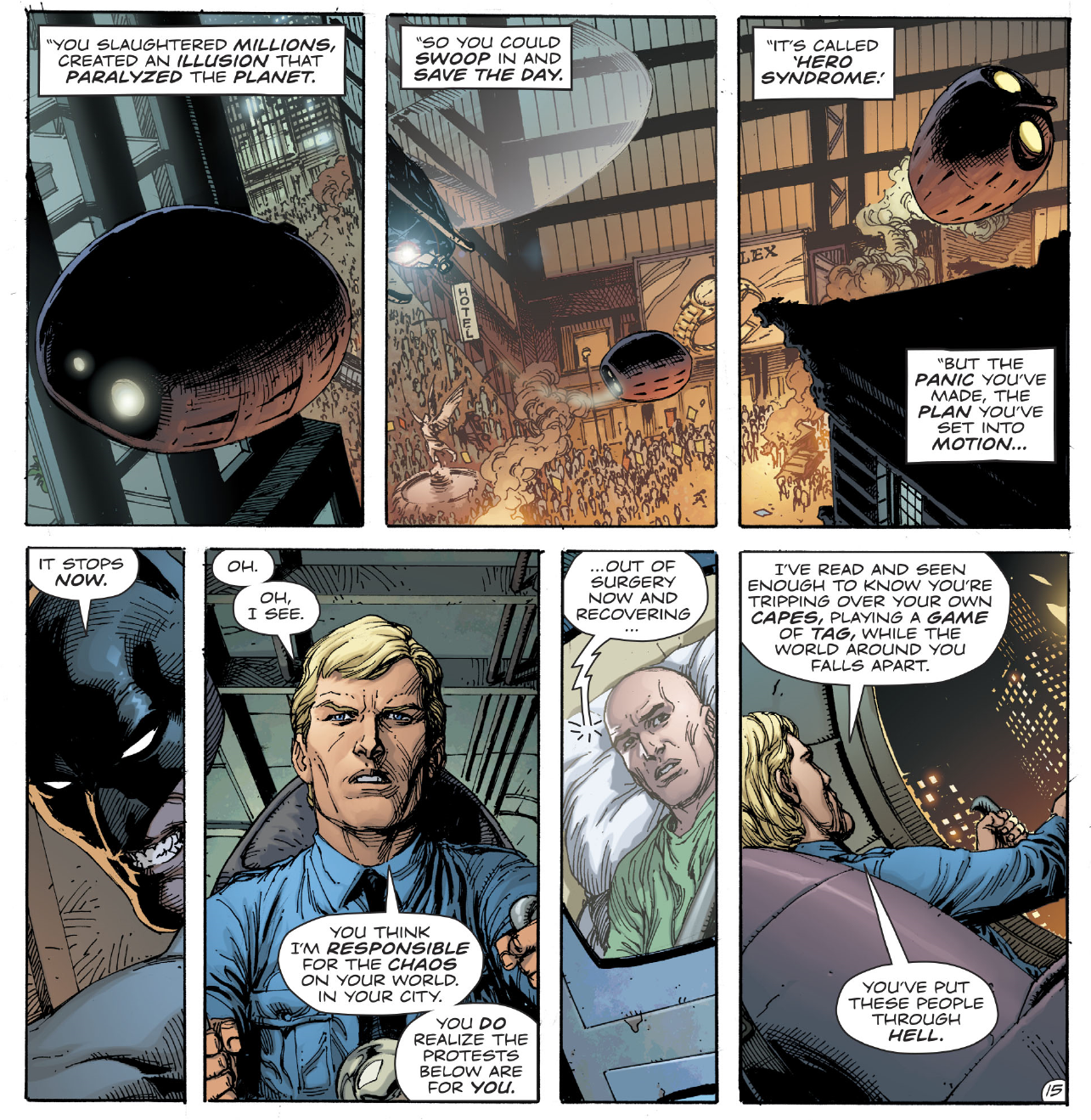 In Watchmen's world Veidt pioneered technologies and used his wealth and intellect to advance the society around him, and even at his most awfully misguided moments, was attempting to bring peace to his Earth (although next time he gets the chance, he should really just skip the psychic squid monsters).

The heroes of DC's universe are so wrapped up in their own element, separated from the problems the world beyond supervillains and superheroes inhabit, that they have lost track of who they're meant to actually be looking out for. Now everything's going to hell and they have barely even noticed. 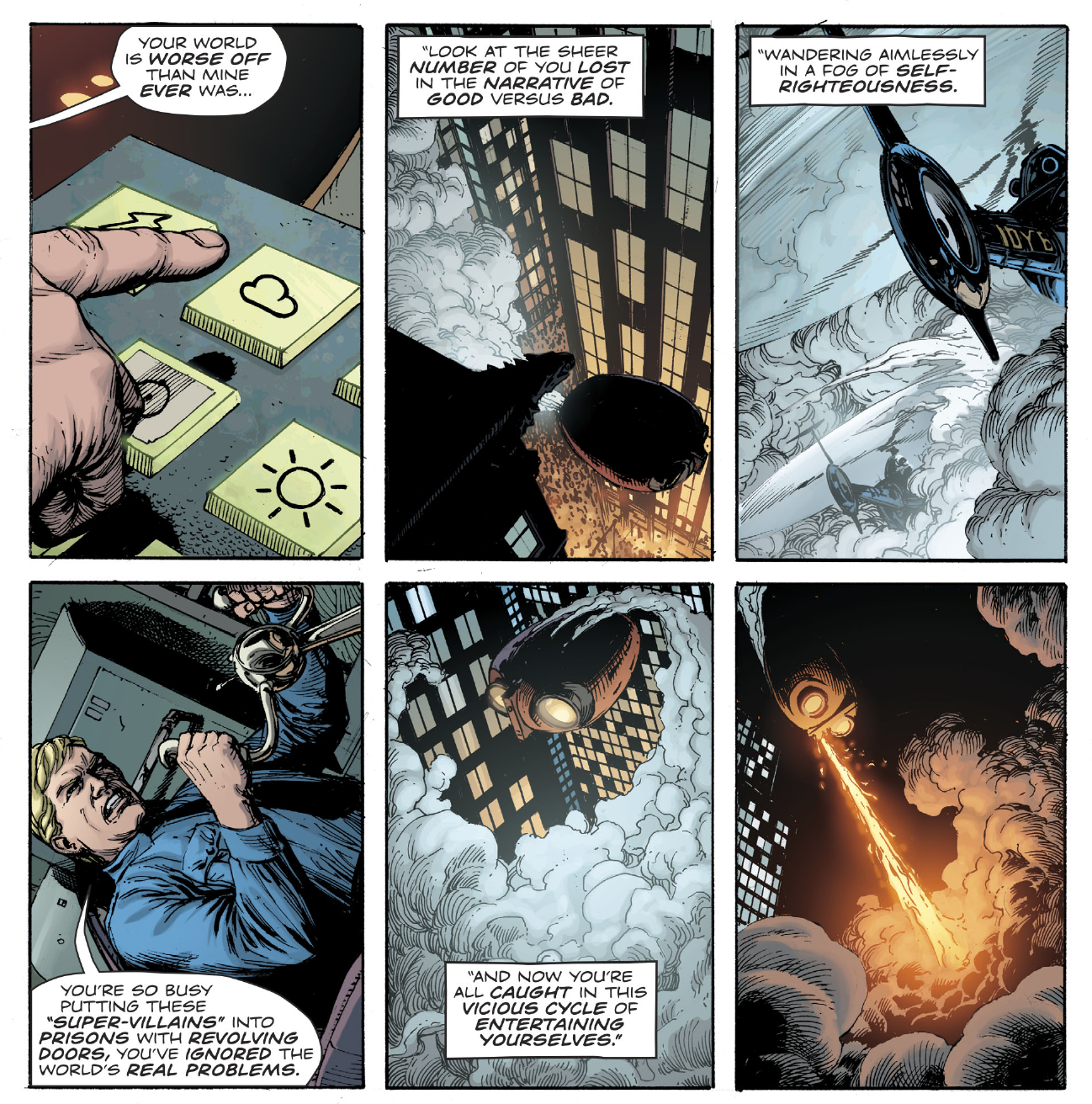 It's not the first time someone's attempted to levy this sort of critique at DC's superheroes - hell, critiques of Batman alone have always been rooted in the idea of a symbiotic relationship between the Dark Knight and his ever-growing gallery of rogues, and whether or not his very presence has forged Gotham into the grim, deadly place he protects people from.

But it's interesting to see how, around the edges of its larger story, Doomsday Clock has slowly turned its take on the DC universe into a world where you can begin to think that even Ozymandias himself has a point.