When An Artist's Goblin Avatar Becomes A Style Icon 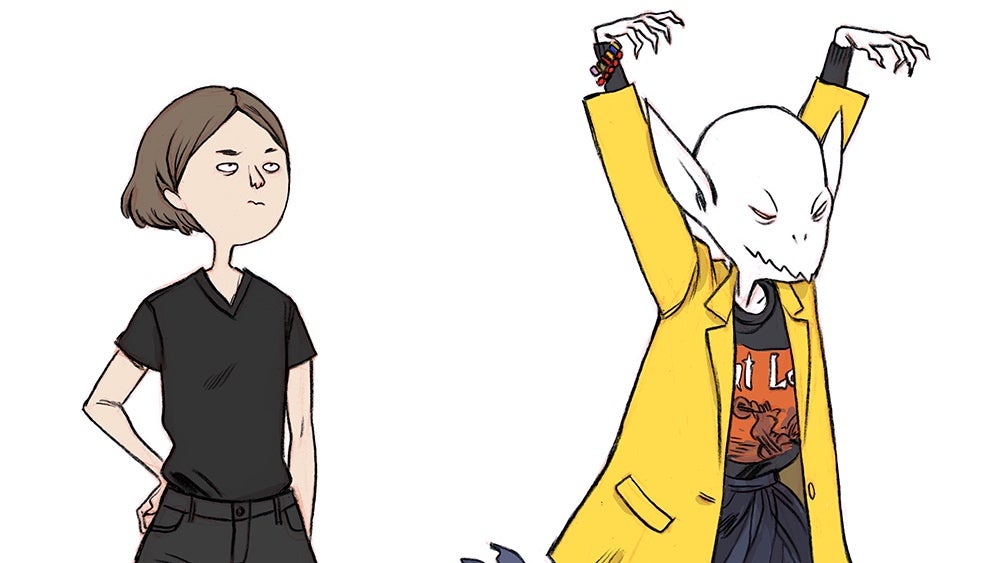 Illustrator Marian Churchland in a self-portrait with her goblin fashion avatar.Image: Hchom

Goblins may be famous for hoarding things, but did you know they also have a killer eye for fashion? Popular art and style blog Hchom is being compiled into a book, so we chatted with the artist behind it about why she chose to turn these creatures into the Edna Mode of fantasy, and what they represent about her life, growth, and personal journey.

Hchom is an artistic lifestyle site that ran from 2009 to 2017, created by illustrator Marian Churchland during the rise of fashion blogs. It dates back to before the age of Instagram and YouTube haul videos, so fashionistas turned to sites like Blogger and Wordpress to showcase their style.

Churchland's had a unique angle, though: Her blog hardly had any actual pictures.

In an interview, Churchland said she was fascinated by lifestyle blogs where women and men would show off gorgeous photographs featuring "beautiful pictures of bread, and full English breakfasts, and park gardens," and wanted to create a lifestyle and fashion blog of her own.

Only problem: Churchland didn't have a camera, and she really didn't want to take photos of herself. Instead, she drew pictures.

This is where the goblin came into being. Churchland said her fashion goblin isn't a character, per se, but rather a representation of herself and what she was going through at the time.

"The goblin's personality is an exaggeration and - I'm not sure how to put it - not quite idealisation, maybe an embroidery of a lot of negative things I was struggling to cope with at the time," she told us.

"The goblin is greedy and selfish and wants things its own way. It hoards away all its nicest treasure. It doesn't share. It's a kind of shadow-self, if I want to get serious about it. But that said, it also allowed me to view myself outside myself. It was a positive fiction, in that respect."

The Autumn-Winter 2011 collection for Churchland’s imaginary Hchom fashion line.
Illustration featuring a stylish jacket and a magic grimoire.
Actual fantasy garb.
A collection of must-have items.
Churchland’s goblin gets ready for an epic and chic adventure.
Birthday shoes.
From the blog post: “I know it’s supposed to be ‘black dogs,’ for depression, but grey dogs match all my clothes.”
Stylish loafers and a walrus with muffins.
A collection of Churchland’s character models, including her “goblin self” (top), a female nymph (middle), and a male troll (bottom).
Churchland’s full self-portrait with her goblin model.

Hchom may no longer feature goblin fashion, but the archives are a delight to read through, harkening back to a time when you'd scroll through the blogs of random people to gaze in awe at their good taste, which Churchland has... even if she didn't physically have most of the stuff.

Churchland said most of the fashion items featured were based on real things she saw and wanted but were often expensive or out-of-reach.

"Usually a post begins with me really wanting an item of clothing, knowing I can't have it, and therefore needing to vent about it," she said.

However, Hchom is more than just fashion - with goblins. Upon reading the site, which contains images of food hauls, perfect jackets, and comics about fantasy apartments, you start to pick up on something else. Something much more personal.

Churchland's Hchom illustrations and attached blog post descriptions can be pretty intimate, expressing her struggles with things like anxiety, depression, and gender dysphoria. And this has connected with her audience.

Churchland said she's loved how people have responded not only to the artwork but also to her. To the way she focused a lens on her life, even without having a camera. She said it was never her intention to tackle personal subjects in her life - she just did it as part of her art.

But her work, words, and feelings resonated with people, many of whom have gone through their own issues.

I view Hchom, especially in retrospect, as a sort of coping mechanism - like a fantasy version, or a re-write of my limitations as somebody who was suffering from intense anxiety. I could barely leave my apartment, couldn't really interact with other humans, etc. I never addressed any of this explicitly on the site, but again, people were perceptive.

I also very deliberately drew the goblin as an androgynous creature. I've always had at least a touch of gender dysphoria, which was a real struggle when I was a teenager, and was, again, something I struggled with in my early twenties as I tried to figure out who I was and how I identified. People saw that in the goblin. They saw representation.

Image Comics will soon be releasing a collection of Hchom illustrations in a trade paperback, with some new goblin fashion artwork Churchland is making especially for the novel. It's set to be released September 20 local time.