hollow knightnintendo switchswitchteam cherry
To sign up for our daily newsletter covering the latest news, features and reviews, head HERE. For a running feed of all our stories, follow us on Twitter HERE. Or you can bookmark the Kotaku Australia homepage to visit whenever you need a news fix.

In the treacherous world of Super Mario Bros., it’s useful, if not realistic for platforms to hover and fireballs to bounce. There’s no logic to why things are that way. They just are. That’s fine, but I enjoy when a game’s designers find a way to justify the weird rules of their game, as the creators of Hollow Knight have about why their hero can’t always use his map.

Hollow Knight is an exploration game in the style of Metroid in which consulting one’s map is as important as slaying enemies. We’ve hyperventilated a lot about the game lately.

It’s a beautiful world set mostly in an underground kingdom of bugs and is full of satisfying secrets to discover.

Hollow Knight Has Sold More Than 1 Million Copies On PC

While there's been recent talk about how well the Adelaide-made Hollow Knight has done since launching smack-bang in the middle of E3, the game's inaugural release has also hit a massive milestone.

The map in Hollow Knight follows some wonderful rules of video game logic that merge the rational and the irrational. The map is filled out gradually as you play, though only once you do two other things. First, you must find a character called Cornifer who is always ahead of your hero, the Knight, in each region you discover.

Cornifer will sell you incomplete maps of what he’s found so far (although in one area that particularly terrifies him he, fittingly, sells his least complete map). Second, you must go to a bench and sit on it. Only then will the map be updated with the contours of the rest of the rooms you’ve explored.

One of the little brilliances of Hollow Knight is that the map that players can see is also represented as a map that the Knight carries with him.

The rules of filling out the Hollow Knight map are absurd by the standards of real life.

A real person would not refrain from mapping a strange new place until they found a fellow explorer. They also would not wait until they sat on a bench to annotate any map they’d obtained.

The rules of filling out that map, however, make Hollow Knight more interesting. The player needs to chart the rooms they’re in, since they need to be sure they’re thoroughly inspecting the game’s environment for secrets. I need to have a map. When I enter a new region I don’t know where Cornifer will be, but looking for him — listening for him, really, since the player will hear him humming when he’s nearby long before they see him — provides a consistent, worthwhile goal.

Once I’ve found him and bought a partial map, I’ve got a toehold of progress in visualising the map of this new region I’m in, but I next get the tension of exploring beyond the initial line-work of Cornifer’s map, plunging back into the unknown until I reach a save bench and fill more of it out. The undulations of ignorance and knowledge are invigorating.

Best of all, the rules of filling out the map make a silly sort of sense. We can assume that in the fiction of Hollow Knight, the knight is no good at drawing maps and that Cornifer is. Cornifer’s whole identity is guy-who-makes-maps, so of course we rely on him to start a map in each region.

The stuff about filling the maps out on the bench makes sense, too, because one of the little brilliances of Hollow Knight is that the map that players can see is also represented as a map that the Knight carries with him. When the player taps a button to produce the map, the Knight pulls his version of the map from his cloak and looks at it with both hands.

It therefore feels right that the Knight surely can’t add to Cornifer’s map while he’s poking through mysterious tunnels and slashing his nail sword at enemy bugs. He needs to find a bench, a safe space where he can sit down and focus, before he can mark up that map. 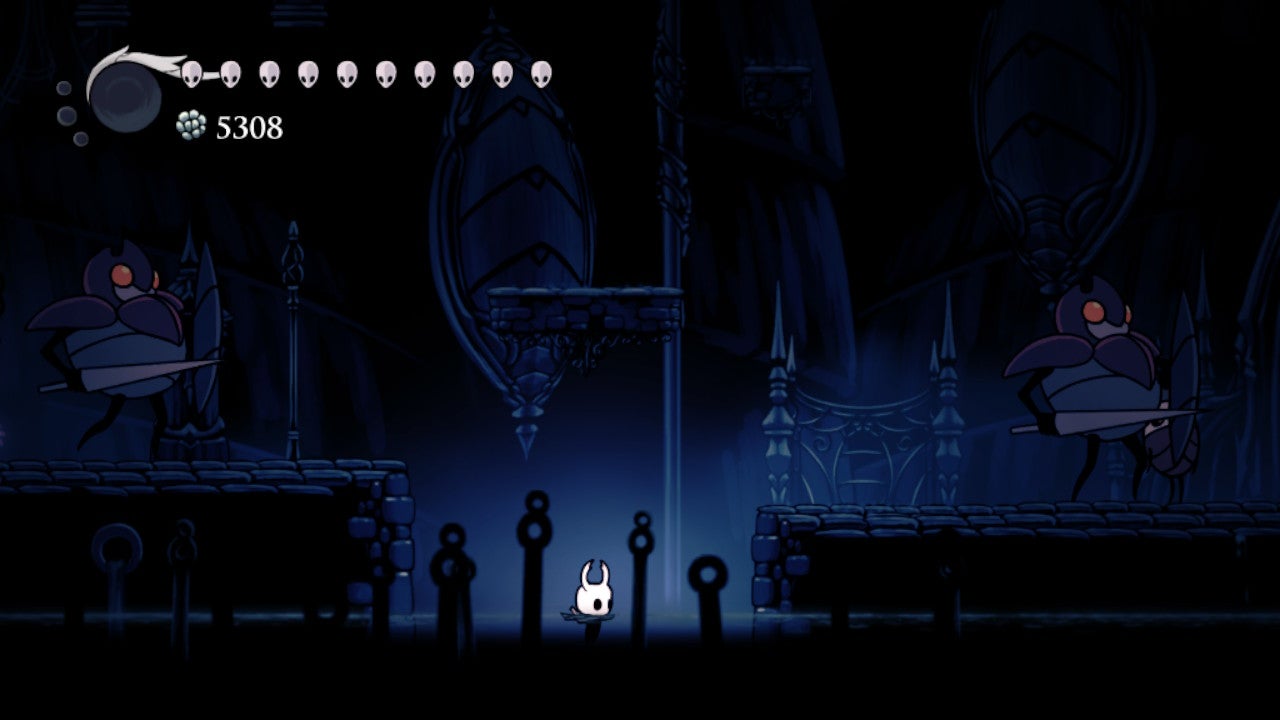 This gets back to the idea of when the player can check the map and the peculiar but pleasing constraint the developers have put on it. The player can look at the map when the Knight is standing on solid ground. Tap the button and he pulls the map out and looks at it while the player does, too.

The player can also look at the map while the Knight is walking. Tap the button while making him walk and he starts eyeballing that map while taking his stroll. The Knight will not take out the map while jumping, but who checks a video game map mid-jump anyway? He also won’t check the map while floating in water (or acid!). That feels unusual. That is perfectly consistent with the game’s logic — don’t want to get that map wet.

And that introduces an unexpected constraint.

Who’d have even expected to want to check their video game map while in the water, but it turns out that once a game that’s all about map-checking won’t let you do that, that this weird little constraint proves to be interesting. In a game in which one is frequently lost and occasionally chest deep in water, it’s a natural reflex to tap the map button and figure out where in the world you are. You just can’t.

I am no game designer, but I’m guessing that it would be easier to let players check the map while the Knight is floating in water than to create the rule that he can’t. Or, perhaps, it is harder to justify that action if an animation is needed to show him opening a map and there is no map-opening-while-floating-in-the-water animation that wouldn’t look ridiculous by the standards of it looking normal for a little buy guy to open a map while standing on dry ground.

Whatever the case, there’s a logic to it that feeds into an interesting constraint. In a game that frequently challenges players by withholding knowledge and testing their ability to uncover secrets, blocking the map is a fun way to needle the player, to not let them get too comfortable in charting their progress and knowing where they stand.

And it all makes sense. Wouldn’t want that map to get wet, after all.