Darling In The Franxx Doesn’t Make Good On Its Promises

Darling in the Franxx is a show about children fighting monsters in giant robots, but through its 24 episodes, it undergoes a metamorphosis from teen melodrama with mecha to a galactic-scale conflict. This transition isn’t very smooth, however, and by the finale, Darling feels like a beautifully animated series that never quite sticks the landing.

The dystopian future of Darling in the Franxx pits the remaining humans, led by the mysterious overseer Papa and APE (a collective of ruling adults) in mobile domes that house the last of human civilisation, against massive blue-hued creatures called klaxosaurs.

To protect the adults and their home, children are conscripted to pilot massive robots — the titular Franxx — in boy-girl pairings, ripping out the core (think heart, though placement varies) of klaxosaurs to kill them.

And for some reason, they do it in an odd, sex-like position. Anime! 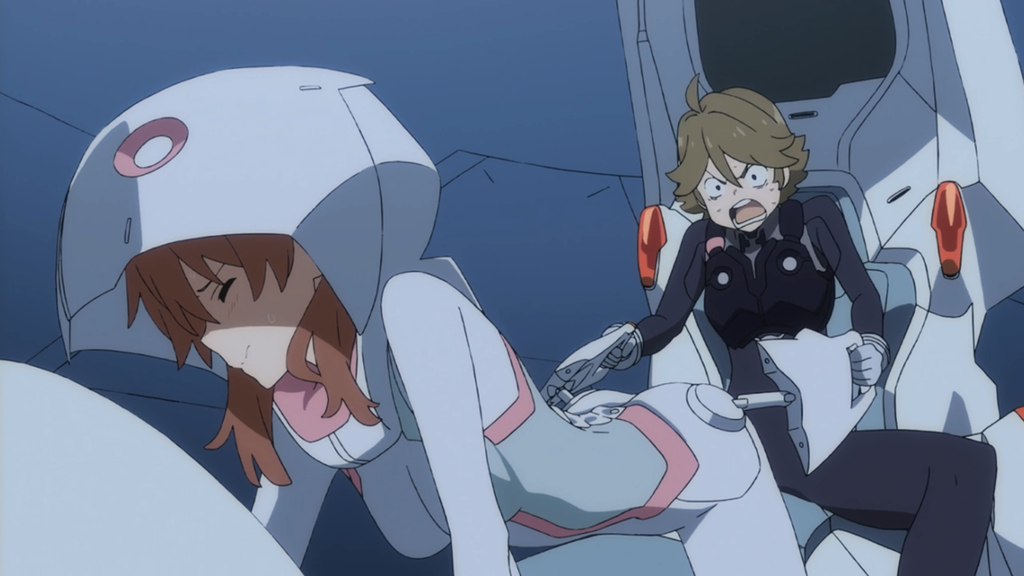 Protagonist Hiro is mostly incompatible with his assigned partner. He doesn’t excel at piloting his Franxx, and he’s worried his life has no meaning if he can’t fight and kill klaxosaurs like the rest of the children.

Then, he stumbles into the infamous pink-haired, red-horned pilot Zero Two. It’s rumoured that she saps the life of her male copilots, but when a fight rages too close to home, Hiro jumps into the pilot’s seat. He kisses Zero Two, blacks out, and wakes up as the copilot to the black widow of the Franxx.

If any of this sounds familiar, it’s because Darling in the Franxx is reminiscent of other major anime series featuring giant robots and world-ending calamities. It has shades of Neon Genesis Evangelion, mixed with the robot design and escalating scale of Tengen Toppa Gurren Lagann.

The latter is for good reason: Studio Trigger, the current house of several creators of Gurren Lagann, worked with CloverWorks to produce Darling. In moments, especially in the early and middle parts of the series, you can see their handiwork clear as day.

The mecha fights are gorgeous, especially early on. These aren’t slow, lumbering hulks, but high-speed, agile humanoid machines that do serious damage.

Each member of squad 13, the focus of the show, has their own design and fights a little differently than the others. Zorome and Miku’s Franxx likes to get up close and personal, while Kokoro’s tends to hang back a bit.

Early fights are focused on just fighting klaxosaurs, whether one or a pack, and the splendid animation keeps fight scenes exciting. 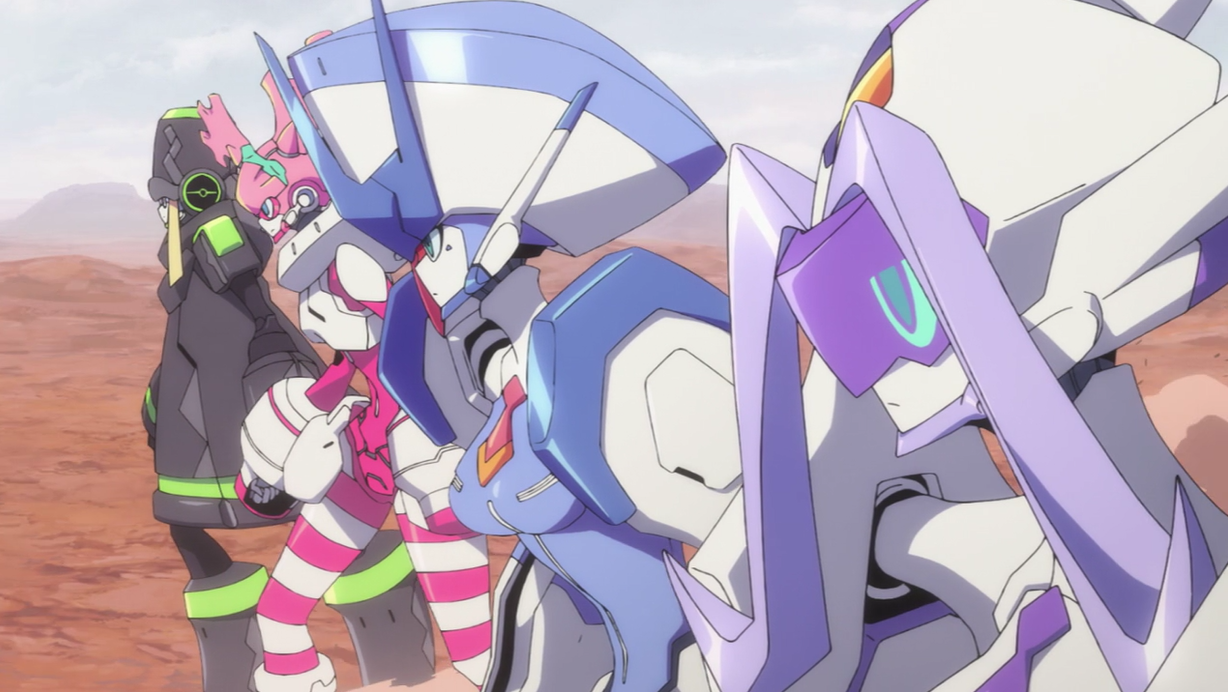 While the mech fights and piloting take centre stage early on, especially the strange Robot-Handles-On-Arse method the kids use to run them, it quickly becomes clear that Darling is about the relationships between the pilots.

Hiro’s squad is unique among the many child soldier pilots out there. Most other pilots are emotionless, piloting the same basic model of Franxx, but squad 13 control bespoke mecha designs.

The main characters, unlike other pilots, are also emotional and full of drama: You have a best friend with unrequited feelings, a bro pal, the pilot whose confidence hides a crushing sense of inadequacy, and a brash child whose naivete is endearing but still a fault.

The real breakout star, though, is Zero Two. She is as much a protagonist as Hiro, and her character arc is one of the show’s best parts.

She starts out strong, aggressive, and determined to be with her “darling” (Hiro) and destroy klaxosaurs. But as the story goes on, the tension she brings to squad 13 and the reasons behind her appearance, her attitude, and her feelings for Hiro produce some of the best parts of Darling. 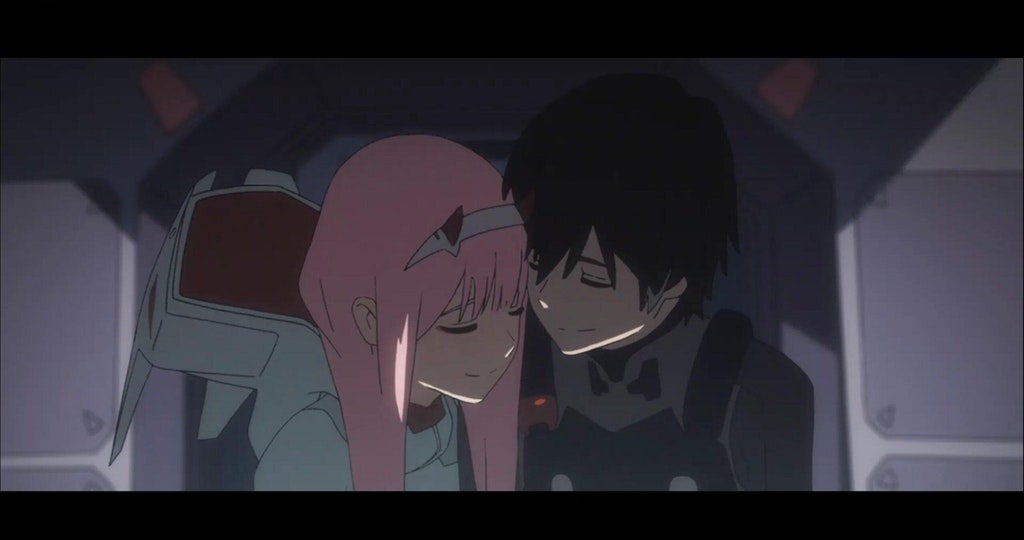 Much of the show’s first half is monster fights mixed with love triangles and drama. Ichigo, the squad’s captain, is infatuated with Hiro. His best friend Goro has caught feelings for Ichigo, while Hiro and Zero Two spiral further into a dangerous romance.

Other pilots struggle with their own feelings, and since they all live in the same house, a lot of both fun and pain comes from their spiderweb of messy emotions.

Darling is about the stumbling, aggressive onslaught of puberty and adolescence, where children are forced to determine their destinies rather than have them preordained by others. They struggle with jealousy, envy, and how to define an identity they don’t fully understand.

One of the show’s better, sadly underdeveloped side plots features Ikuno, a girl who finds herself drawn to pilot with other girls instead of boys. Franxx pilots are divvied up into pistils (traditionally girls) and stamens (traditionally boys), but Ikuno wants to pilot with Ichigo, a fellow pistil.

It’s revealed over the course of the series how little these children have been taught about the world as we know it, much less the birds and the bees, so she has no context or understanding of why she feels different from the other pistils and has to forge her own path.

Ikuno’s journey over the course of the series to learn to be confident in her identity is enjoyable — for a brief moment before it’s shuffled to the periphery.

That shuffling of storylines is to make way for the main plot, which is where Darling ultimately falls short.

The series sets up interesting dynamics and conflicts, dangling big bads such as Papa’s elite pilot force and a mysterious klaxosaur princess (who is, of course, centuries-old in lore but mere years-old in appearance).

And then all of it gets wiped away in the last four or five episodes. 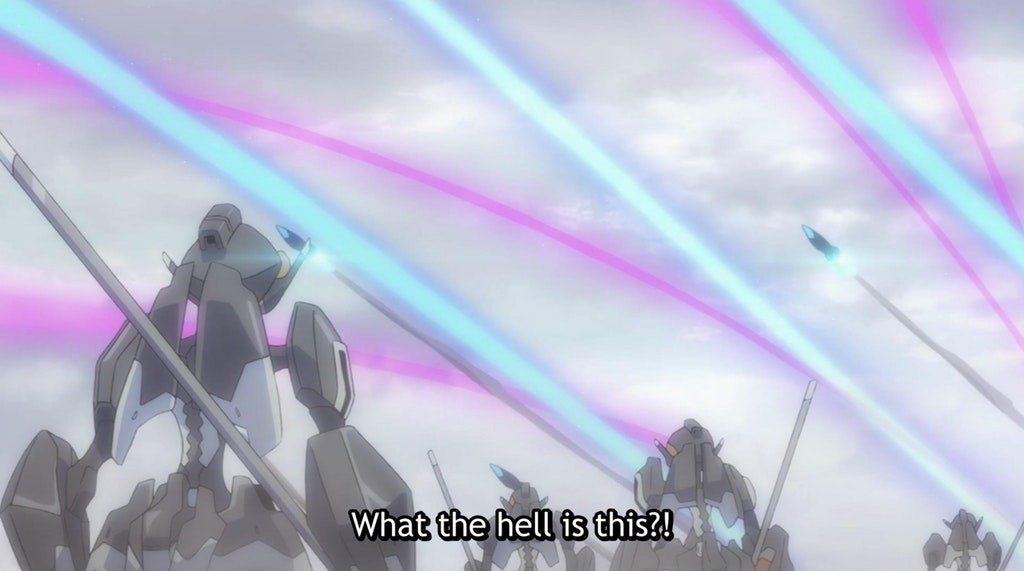 Where much of the show is about interpersonal relationships and the fumbling awkwardness of youth, the final episodes conjure a last-act villain out of thin air and then start ratcheting up the oddity.

Spaceships, changing allegiances and impossible odds suddenly present themselves, in a flurry of exposition and attempts to wrap everything up as the show rockets towards whatever vague resolution it can summon.

Darling doesn’t shy from symbolism, such as the pistil/stamen relationship’s connection to sexuality and identity. For most of the show’s run, it seemed that symbolism would eventually come to fruition in service of some greater meaning.

Instead, it just seems interested in escalating and closing the new conflict, while threads such as Ikuno get left in the dust.

For all its flaws, the ending is bittersweet. The show doesn’t quite live up to what it hinted at for so many episodes, and I’m baffled by some of the sudden plot shifts at the eleventh hour.

But watching it simulcast, as it aired, was its own kind of experience. The series is so odd and the journey so tumultuous that following the broadcast and the ensuing rabid, at one point irrationally aggressive fandom became part of watching in itself.

Any recommendation of Darling I can give comes with caveats. Give it time, let the characters develop, the weird sex-piloting thing really fades into the background after a while, it isn’t just about mecha fights.

Darling in the Franxx has its moments of brilliance that will stick with me as much as its hasty, rough conclusion. It might not be perfect or even great, but it was truly fascinating to follow.