Far Cry 5’s Lost On Mars Is Another Disappointing Expansion

Is there life on Mars? On the surface Far Cry 5’s second DLC seems to answer in the affirmative. The red rock is bursting with armies of alien insects. Some are small. Some are big. Some fly around like Pterodactyls and harass you by spraying firey chemicals at you.

As these encounters stack up, however, Far Cry 5’s vision of Mars turns out to be straightforward and tedious. Rather than provide a novel holiday from hunting mountain lions and blowing up convoys back in Hope County, Montana, I spent the majority of Lost on Mars desperate to return home to the world of Far Cry 5 proper.

Out yesterday on PC and console, Lost On Mars has you play as Nick Rye, a side-character and gun for hire from the main campaign, as he teams up with lovable failson Hurk Jr to try to save Earth from an alien invasion. This requires going to Mars and doing the bidding of an AI named ANNE who Hurk has fallen in love with.

Gameplay includes, among other things, climbing a bunch of towers to power them on and shooting a bunch of arachnids. It also requires scavenging a relatively large but empty map for Hurk’s body parts for reasons I’m not quite clear on.

When you first meet with him he’s just a floating head. Mars has not been kind to the loquacious brosef, and as a result he accompanies you from inside a hovering robot that his consciousness has been transferred into.

It sets up some funny jokes, but mostly just sets up another collectable you need to scavenge for. 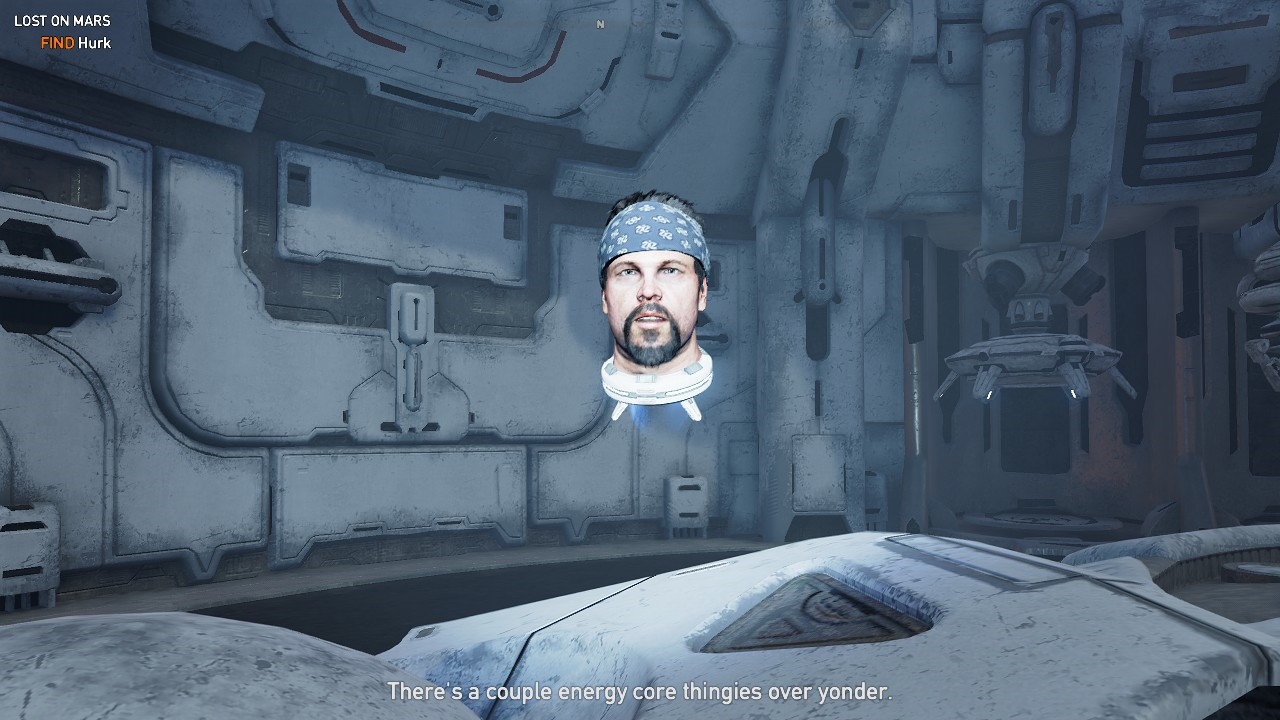 This was the first time someone told me to collect some energy cores but it was by no means the last. (Screenshot: Ubisoft, Far Cry 5)

Powering on towers and other facilities, some of which are buried underground, is fun the first couple of times.

I didn’t miss towers in Far Cry 5, but their return in Lost on Mars is forgivable thanks to a new item: The gravity belt. It acts like a jet pack, allowing you to fly upward until it overheats.

This device, combined with a Mars equivalent to the wingsuit, allows for some interesting platforming puzzles. Mars even has a handful more Clutch Nixon stunt missions that help you to explore the nuances of low gravity traversal.

But climbing these towers, fighting a lot of enemies at the top (or bottom), and then moving on to the next one gets old by the fifth time, which is a big problem considering that’s just about all the DLC is.

Finding Hurks body parts also gets repetitive. They’re either lying out in the open with icons that appear on your map once the nearest tower has been powered on, or hidden in an arachnid nearby for you to blast it out of. As Hurk even says at one point, the whole thing feels pretty copy and paste. 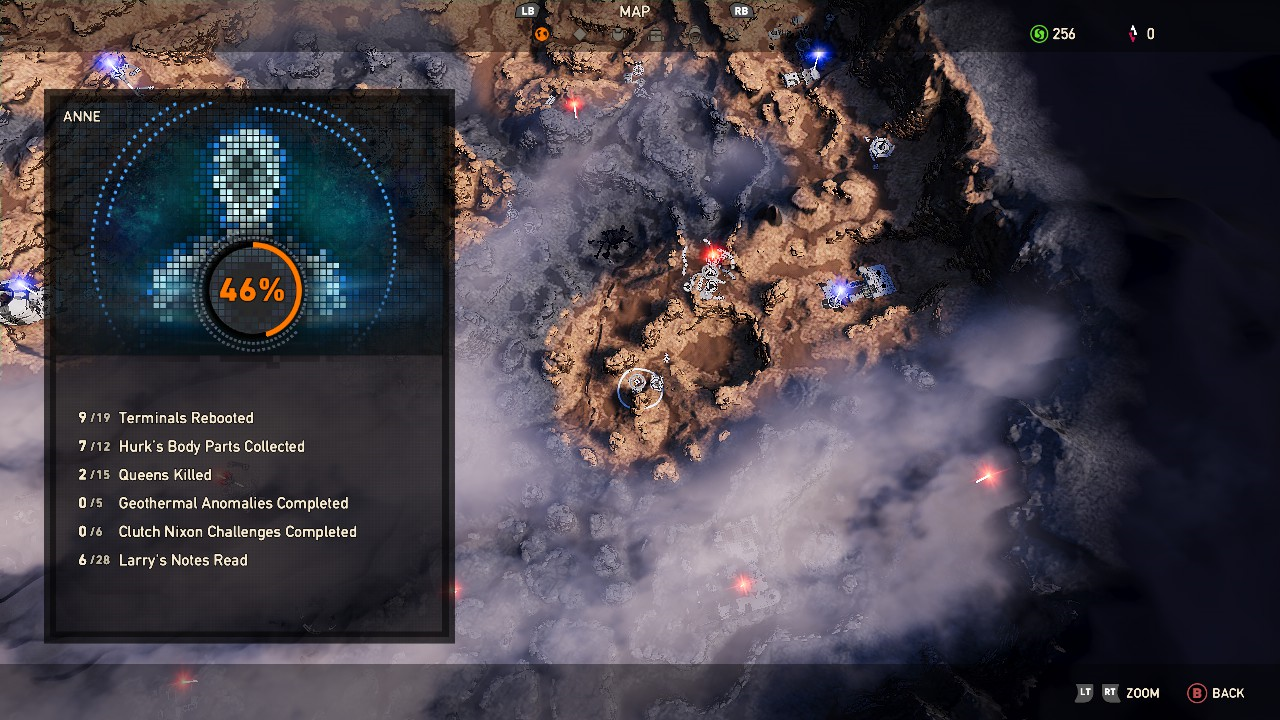 Lost on Mars has a hearty checklist of stuff to do but nothing that feels new or interesting enough to make a whole DLC for. (Screenshot: Ubisoft, Far Cry 5)

Lost On Mars’ saving grace is intended to be its weapons. Far Cry 5’s arsenal was neither large nor varied. The second DLC gets around that by introducing a new set of laser-based weapons. Laser pistols, laser assault rifles, laser shotguns — Mars has it all. There are even a few special ones, including the Hellfire which shoots a bunch of energy orbs at once.

To provide ample target practice, Lost on Mars showers you with arachnids to murder.

Often they hide beneath the surface ready to ambush you should your feet touch the desert sand. This is like the movie Tremors (which Hurk is all too happy to point out). Other times they just patrol the planet waiting for something to go down. Occasionally you’ll run into queen arachnids which are several times larger and more bullet spongey.

The result is an endless barrage of fights that all feel mostly similar and workmanlike. The weapons don’t feel fine-tuned enough, nor the enemy animations responsive to their impact, to make fights very satisfying.

As bad as the enemy AI was in the main game, it didn’t take many waves of bugs throwing themselves at me to make me long for the shootouts back in Montana. 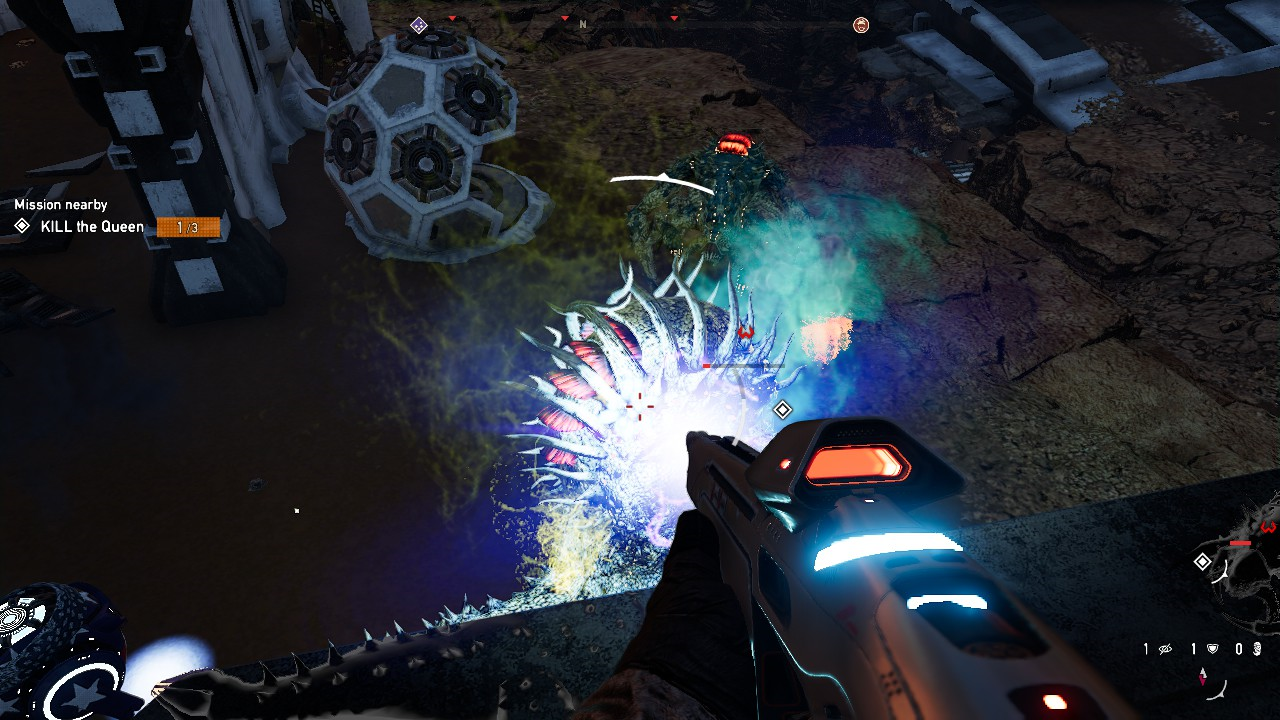 The arachnids have weak spots on their backs you can fire at to bring them down faster. (Screenshot: Ubisoft, Far Cry 5)

The entire journey lasted around five hours, with me taking my time and trying to knock off as many of the things on my Martian to-do list as possible. It would no doubt last a little longer on hard or if you tried to perfect the handful of Clutch Nixon stunt courses available, although I’m not sure why you’d want it to.

I kept waiting for something unexpected to happen or a particularly cool objective to pop up, but for an absurd romp across Mars it never seemed to get past second gear.

Far Cry 5’s previous expansion, the Vietnam-based Hours of Darkness, brought more interesting stealth mechanics to an mission structure that was much like the main game, just set in a new location.

Lost on Mars adds vertical exploration with the gravity belt, but leaves you to deploy it across a mostly barren landscape where every section feels cookie-cutter.

Lost On Mars has the trappings of a fun, sci-fi adventure — laser guns, space bugs, witty banter between an extraterrestrial AI and a Midwesterner with daddy issues — but none of it goes anywhere interesting. My last hour was spent much like the first: Shooting everything in sight and looking desperately for a return trip to Earth.