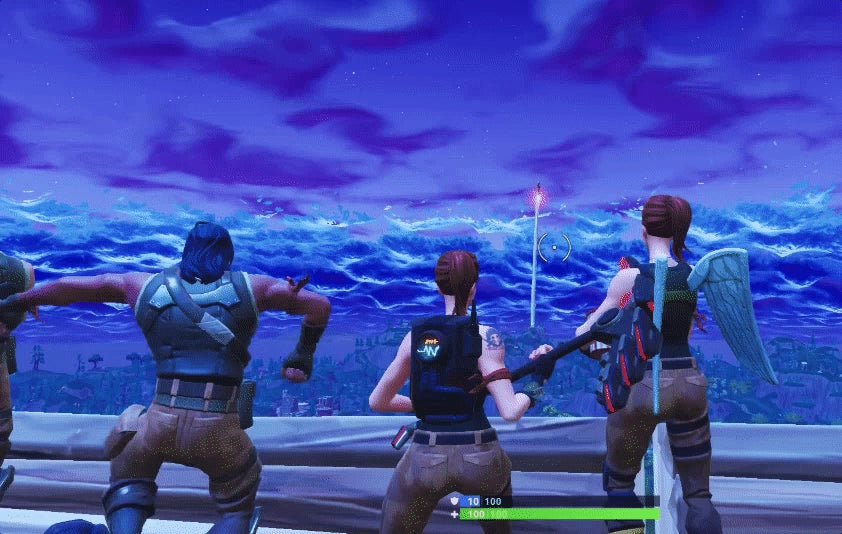 On Sunday, players logged into Fortnite en masse to witness a rocket speed into the atmosphere and crack the sky.

An in-game countdown and a siren prefaced the event. Players had been hyped for days and, just before 3:30AM AEST on Sunday, they set up viewing stations all around the game.

In one game, dozens of players collaborated on making a behemoth staircase for the best angle on the rocket launch. A video depicting the group effort is inspiring to watch. It's exceedingly rare for so many Fortnite players to collaborate on anything, and here, they're all dancing in the sky together.

Just as the rocket fired, but before the sky cracked, all those entranced players were rudely disturbed. The platform they stood on disappeared. Forty-eight fell to their death.

After you die in Fortnite, the camera shifts to your killer. Forty-eight dead players found themselves spectating a player named Elemental_Ray, who had chopped down the bottom of the staircase.

This transgressive act of griefing has earned Elemental_Ray Fortnite's #1 spot in the game's single match kills record. On their Twitter, he describes himself as "the most hated man on #Fortnite".

Predictably, Fortnite players are pissed. Players are tweeting at him, telling him he's hated or that he's "the type of guy that pours the milk before the cereal".

Technically, what he did was not cheating. Ethically, it sure ruined a lot of people's days.

Elemental_Ray did not respond to a request for comment, but one tweet of his said it all: "Even Jesus had haters."