Hand Of Fate 2: The Kotaku Review

hand of fate 2ps4reviewswitchxbox one

Hand of Fate is a unique hybrid of deck-building card adventure and action role-playing game that came out of nowhere to become one of my favourite games of 2015. Hand of Fate 2 improves upon the original in every way.

One minute you’re moving a game piece across a table covered with Tarot-like adventure cards, the next you’re embroiled in Arkham-style real-time melee. An enigmatic figure known as The Dealer guides the player through a tabletop adventure, flipping cards to determine the obstacles and events they encounter along the way.

This story has been republished to coincide with Hand of Fate 2’s launch on the Nintendo Switch this week.

An overturned card may reveal something harmless, like a friendly merchant selling food and supplies. Or perhaps it’s something more dangerous, sending the player spiralling from the safety of the board into a combat encounter with hordes of fearsome foes.

As the game progresses, new cards are added to the player’s deck, allowing them to further influence the encounters and equipment they will stumble upon during quests.

The first Hand of Fate presented this flavorful mixture in a very basic fashion. Missions were a series of 13 dungeons, randomly generated using cards in the Dealer and player’s hands.

The goal was always the same: make it to the end of the dungeon and beat the dungeon boss without being killed by random encounters or starving to death. As compelling as the gameplay was, the “here we go again” feeling was strong. 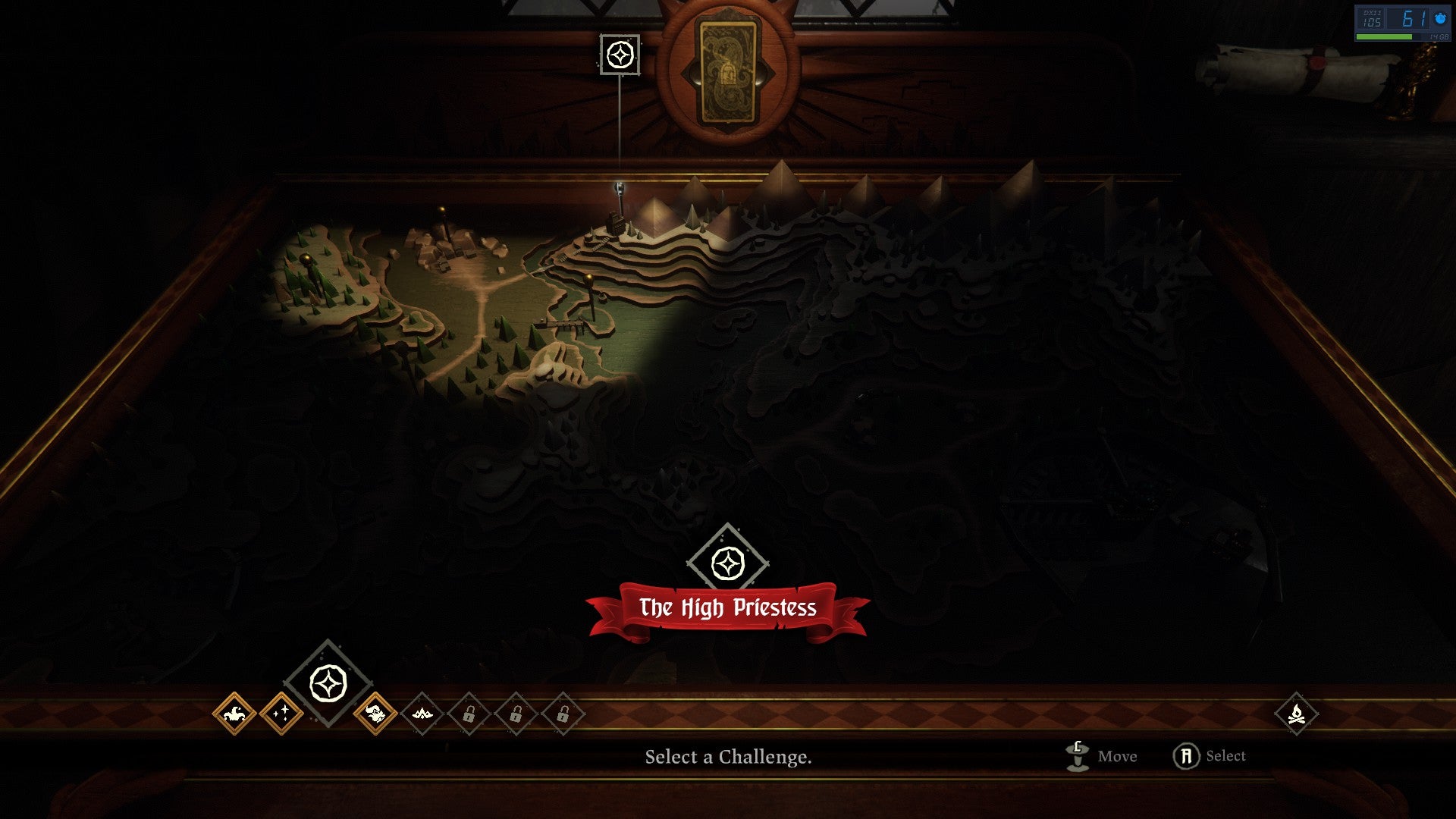 The map is slowly revealed as challenges are completed.

In Hand of Fate 2, the Dealer has upped his game considerably in the 100 years between his exile in the first game and revenge-fuelled return in the sequel. Each of Hand of Fate 2‘s 22 missions, called challenges, is its own self-contained adventure, with different goals and conditions for winning.

One sees the player travelling from town to town, aiding peasants to gain the fame necessary to wield a powerful artifact weapon. Another tasks the player with recovering four artifacts, depicted as pieces moving about the table from card to card.

My favourite challenge so far involves an ageing thief lord who recruits the player to determine which of his three underlings is plotting his assassination. With only a limited number of days to uncover to the culprit, the player goes on a series of missions with each of the three suspects, using combat savvy and games of chance to gather enough clues before time runs out. My least favourite, the challenge of strength, starts the player off with a tenth of their health and a cursed item that prevents normal healing. 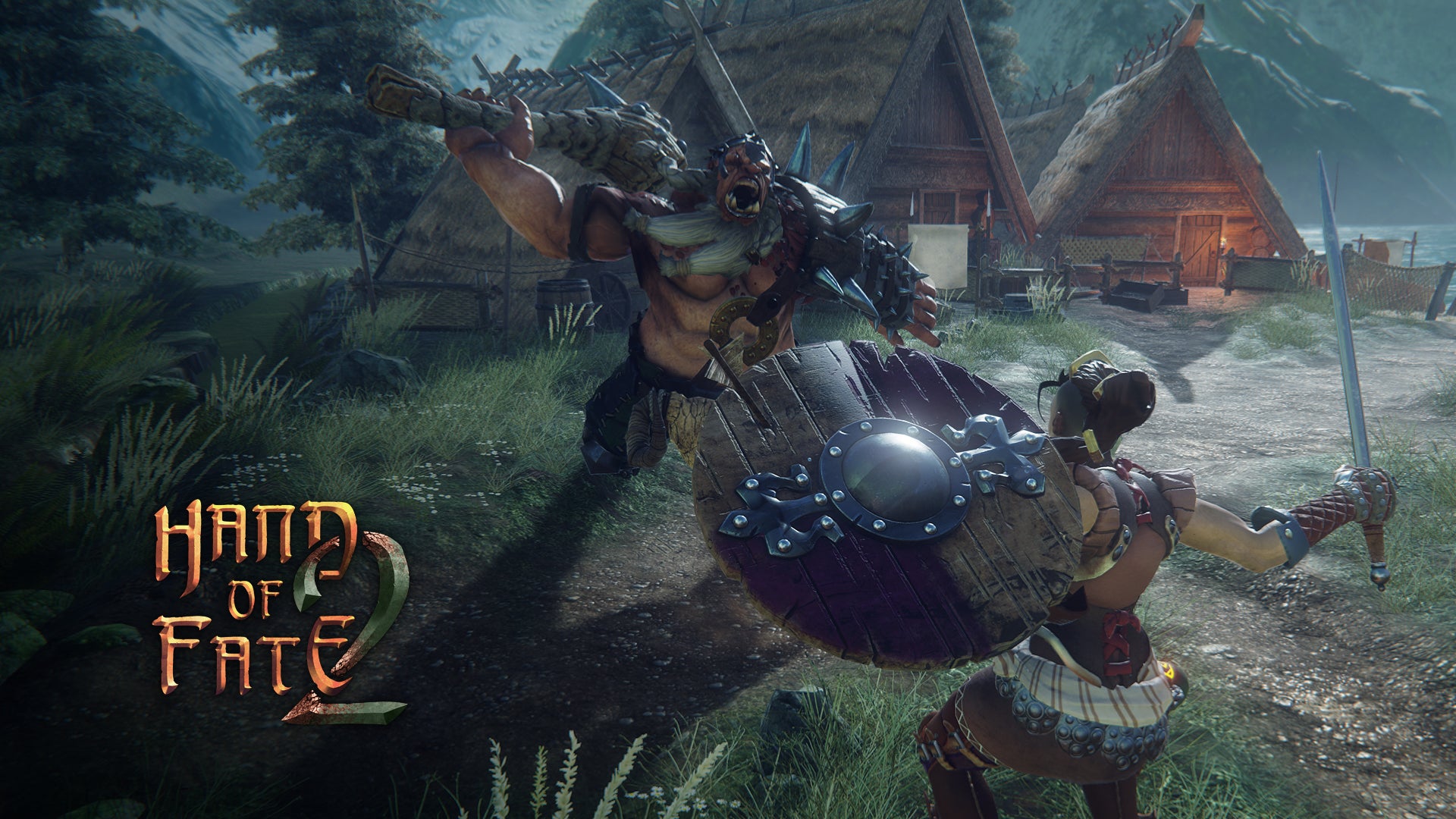 Count your blessings while you’re sitting at his table.

The excellent hybrid deckbuilding/action combat of the first game, only with a lot more variety and polish. The Dealer is best game master.

The challenge of strength is a jerk. Luck is fickle.

Started playing on PC, restarted on the PS4. Completed 20 of 22 challenges (saving myself). Played around 20 hours so far.

Going from a linear sequence of increasingly difficult dungeons to a collection of widely-varying challenges is a huge improvement. Many challenges can be overcome in any order the player wishes.

During the deckbuilding phase before a challenge starts, players are told which enemies and obstacles to expect, allowing them to stack their decks with cards to better handle those encounters. And should hunger, enemies or sheer bad luck overcome the player, they can move onto another challenge rather than beating their heads against the same one over and over again.

Hand of Fate 2 is a game that’s as much about luck as it is skill, so there are times even the most perfectly crafted deck and honed fighting skills won’t save a player from defeat. The Dealer’s penchant for games of chance has grown significantly over the past century.

The “pick a card” method of determining event outcomes, with success and failure based on which of a series of shuffled cards the player chooses, returns to vex even the most eagle-eyed players. New tricks include dice games, a swinging pendulum that must be stopped at the right moment, and the spinning wheel of cards, which makes for an excellent animated GIF.

These games of chance can be frustrating, especially when luck is not on your side, but they also add excitement. They’re where the best Hand of Fate 2 stories are born. A hero on the brink of starvation wins a game of chance and suddenly finds their pack brimming with health-restoring snacks.

A mighty warrior on the cusp of completing an arduous challenge picks the wrong card and has their health cut in half. That’s the good stuff.

Also good are the new companion characters, four NPCs who travel with the player during their challenges, influencing outcomes both at the game table and on the battlefield. Colbjorn, a mighty outcast warrior, uses his powerful dual swords to knock enemies about during real-time combat sequences. He can also influence dice rolls, adding a fourth die to the mix, but at the cost of taking him out of battle for three turns.

Keeping a companion character sidelined during battle in order to use their luck-enhancing skills is a tough call. The game’s combat is a lot more polished this time around. It’s not just about knowing when to block and when to dodge. It’s about knowing the enemy’s weaknesses and strengths and planning accordingly.

New weapon types like dual daggers and massive two-handed hammers are quite effective against certain foes, but not so much against others. With battles often consisting of a mixture of multiple enemy types, having a friend like the armour-shattering Ariadne on hand can come in quite handy.

Companion characters also bring their own stories into the game, with special encounter cards that let you explore their personal journeys.It’s one of the ways Hand of Fate 2 brings a lot more character to the table, along with the ability for the player to customise their in-game avatar, male or female.

Choices are limited, but I’m satisfied with the results.

The game’s most important figure in the game is the Dealer. The cloaked figure, voiced with dulcet gravel by British actor Anthony Skordi, has quickly become one of my favourite video game characters. He’s a consummate game master, guiding the player through their challenges with equal helpings of advice and scorn.

“You find yourself once again in the company of prayer and religion,” he says at the beginning of a challenge involving gathering spiritual blessings. “Haha, how unfortunate.” Sure, he’s pursuing his own agenda, seeking revenge for being unseated as the master of the game at the end of the original Hand of Fate, but I can’t help but love the guy.

Special silver and gold cards can only be added to decks in limited numbers.

The original Hand of Fate is like playing Dungeons & Dragons with only the core rulebooks. The mechanics are sound, the framework is solid and the game is entertaining, but there’s not a lot of variety. That’s fine — first adventures are always a little clumsy.

Now that the Dealer’s had a century to pore over Monster Manuals, combat supplements and adventure modules (I’m picturing him reading on the toilet, and it’s great), he’s at the top of his game.