From the second I laid my eyes on Pub Encounter in the Nintendo Switch eShop, I knew we were destined for each other. “It’s a romance game where you can fall in love with one of several middle-aged men”, reads the description. “They may not be young, but they can love as deeply and passionately as anyone”.

You are probably well aware that dating games have been going through a sort of adolescent growth spurt recently and like any teenager, they’re trying to experiment. Usually, “experimentation” in the dating game scene means replacing “cute boys” with “cute pigeons/cats/sentient toothbrushes” and let me tell you, I am here for it all.

But for whatever reason, “middle-aged men” is the experiment that’s tickled me the most, despite being a totally normal, human thing. 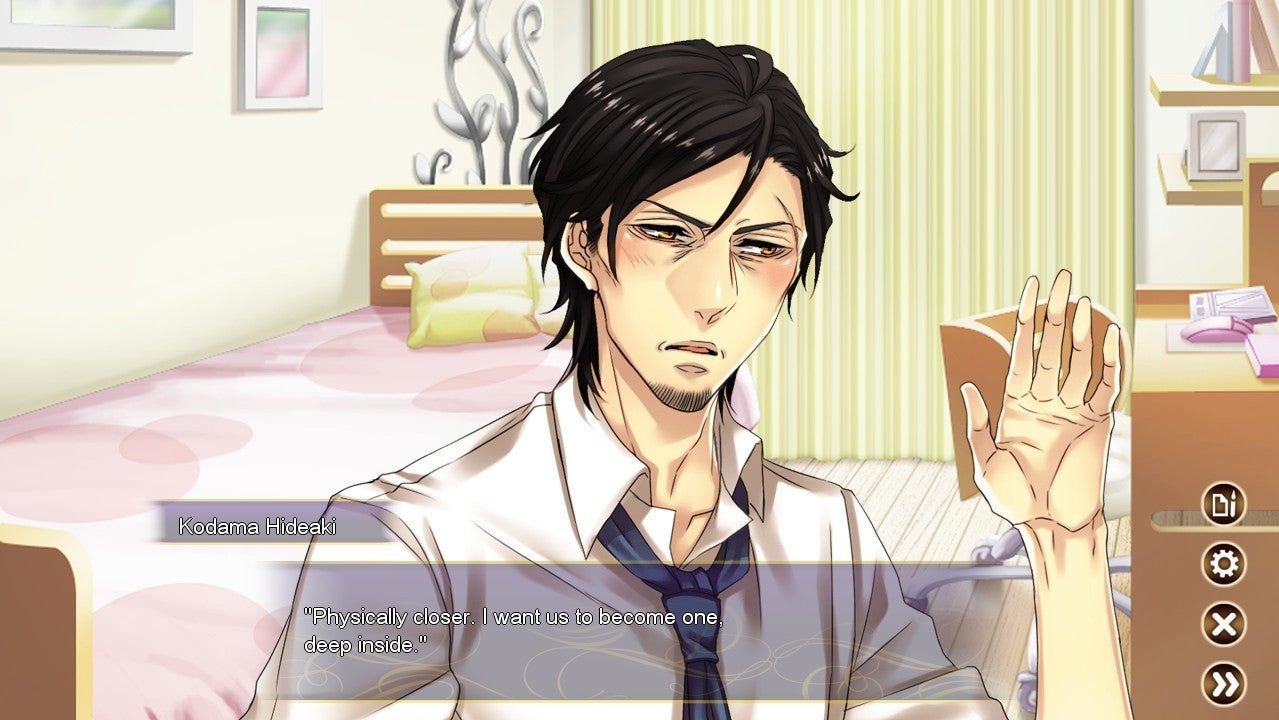 You meet your dusty future paramours in the titular pub, where they are all sitting around making fun of each other. But, to get one major flaw of the game out of the way, I was expecting a bunch of dad-like baby-boomer types, with thinning hair and beer guts, their hair going from salt-and-pepper to just a big ol’ pile of salt.

What I got instead was a bunch of slightly weather-beaten 30-somethings. Only two of them had silver locks and of those, one isn’t even dateable. They are still meant to be sort-of-middle-aged, of course — they all bemoan how difficult it is to be in their early 40s — but I feel like if you’re going to make a game about ageplay, you should really go all the way.

Attempting to hide my disappointment, I, apparently a 20-something student, wandered into the midst of this old boys’ club and they descended upon me like rats on a garbage bag filled with potato peelings. 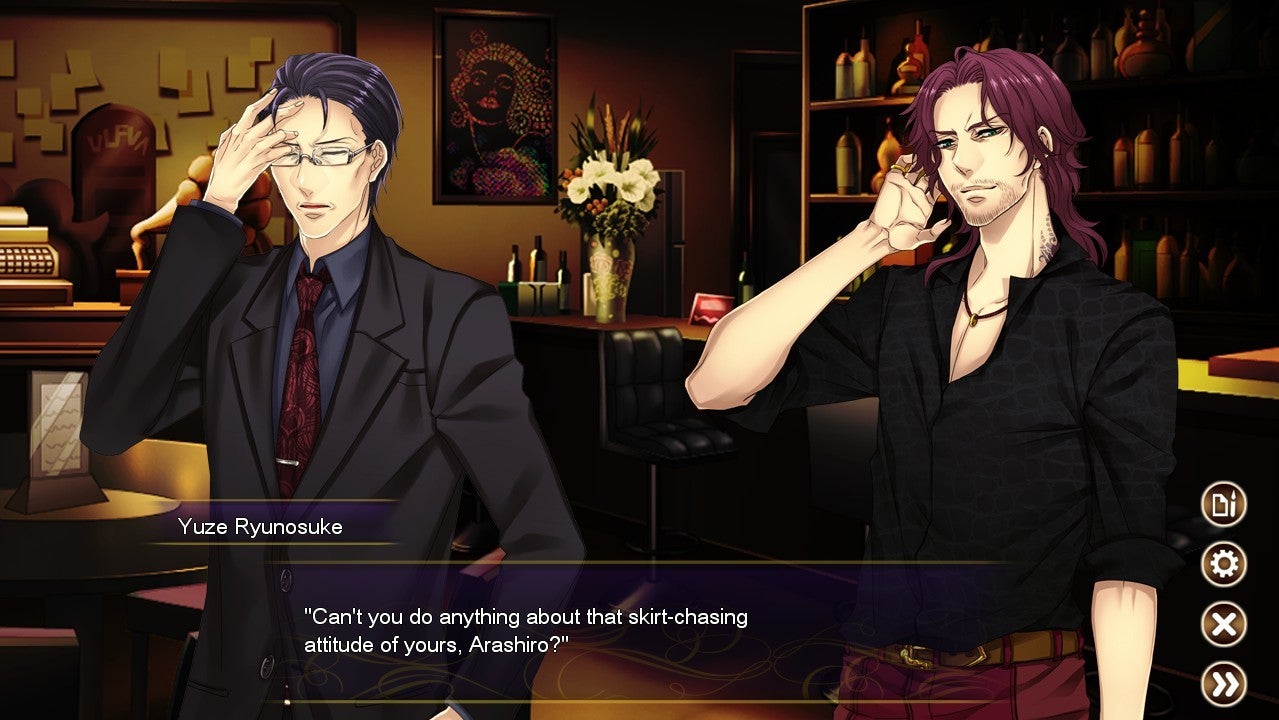 That’s when my intended caught my eye. Tall and statuesque, with long, grey locks cascading down his waistcoat like a silver waterfall, he was the least talkative of the men. I let the rest of them fight over me in the background, but I was transfixed, roleplaying as I was a young woman who’s into much, much older men. 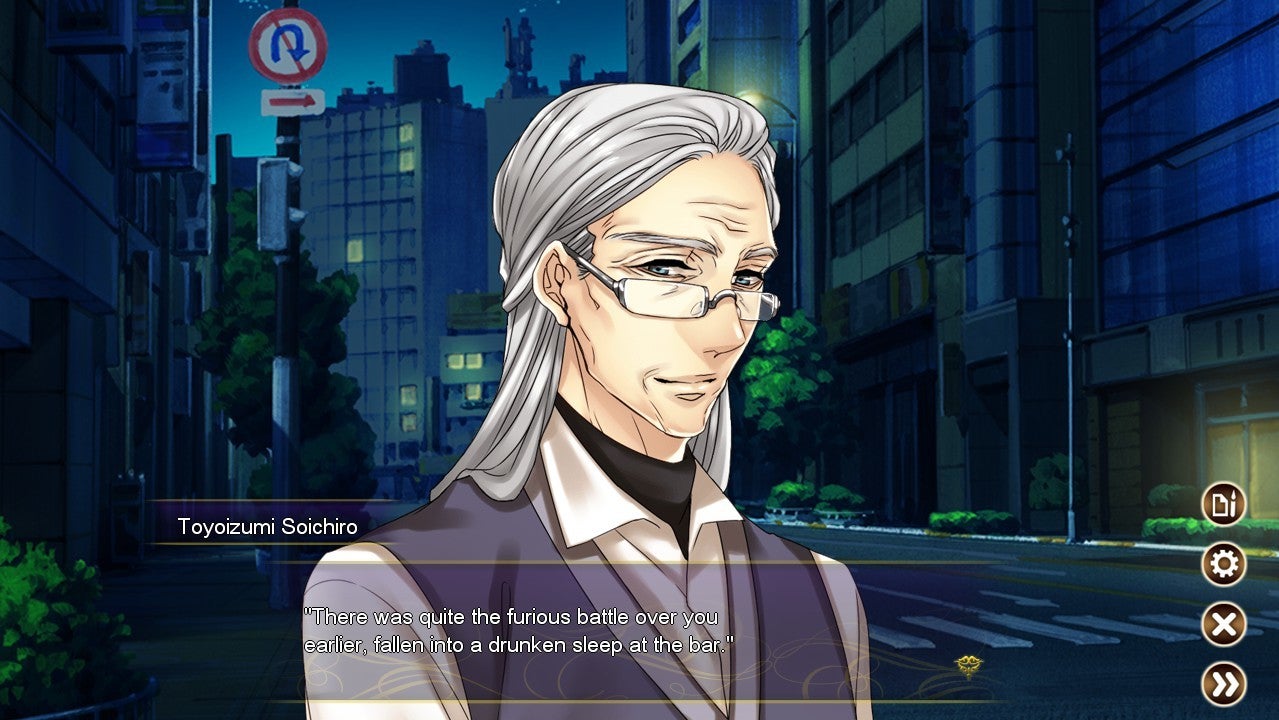 And so, I entered into a relationship with Toyoizumi Soichiro, the bartender at the pub (which really is a swanky bar — it turns out Soichiro is a world-class sommelier who is honestly wasted on some old guy pub).

He is the standard dating-sim type who is embarrassed by his own feelings, scarred by his past and unwilling to commit to you until he sorts his own shit out, which of course you have to help with. You would think that middle-aged men should already have their shit sorted out, but no.

Soichiro has some kind of family drama, where his talented flower-arranging prodigy of a younger brother is living off the money Soichiro makes, despite being a well-respected artisan in his trade and also a fully-grown man who should also have his shit together.

Eventually, you help him figure it all out and blah blah blah, this is a dating and sex game column, not a figuring-out-family-issues one. 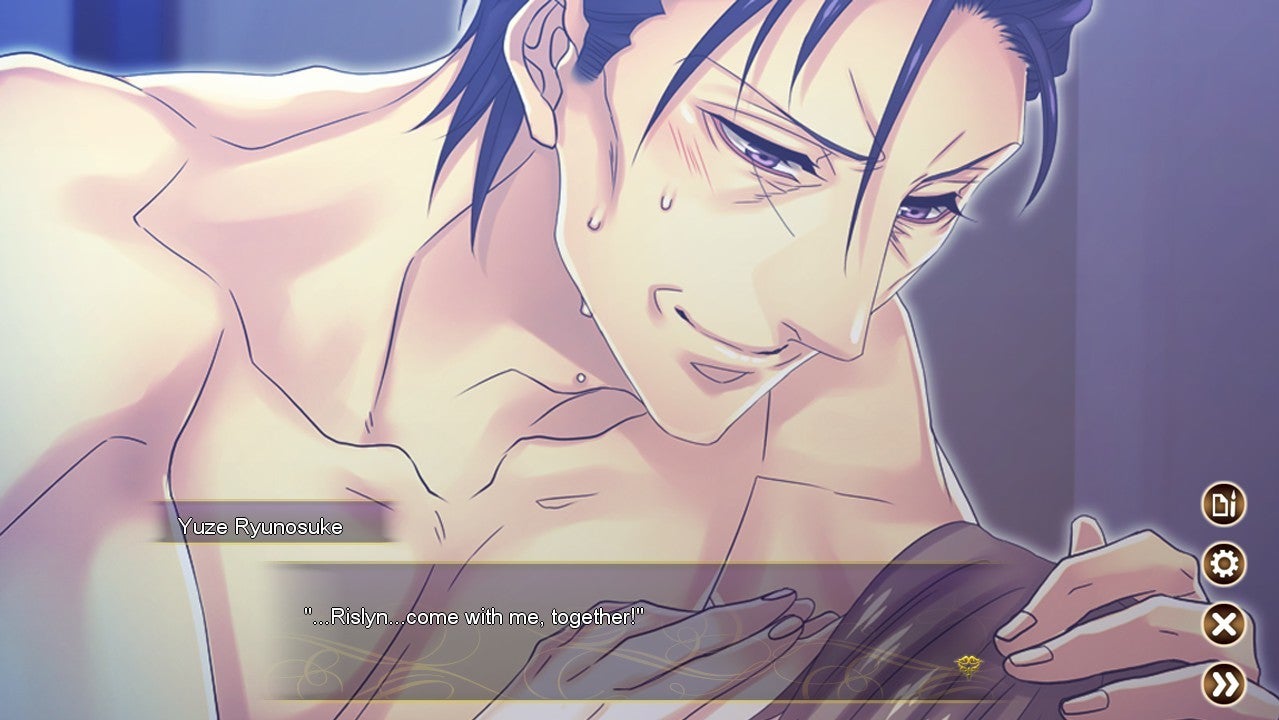 The sex scenes are so much more than I was expecting, considering that this is on a Nintendo platform. Many dating sims, to my immense disappointment, gloss over the sex, or show some PG-13 nonsense with nary a nipple in sight.

Many others go to the other extreme, with too many nipples, if you ask me and big-breasted women making all sorts of noises while you give them a good dickin’.

I guess Pub Encounter is closer to the first type, but it sure did make me feel uncomfortable in the way the second type does. At one point, Soichiro had me splayed across a table in the back of the bar as he licked aaaaaall the way up my leg and I think you all know what happens when you run out of leg.

That in itself would not have been too bad, were it not for the image supplied, of Soichiro’s naughty look and incredibly pointy tongue oh god do not put that down there please. 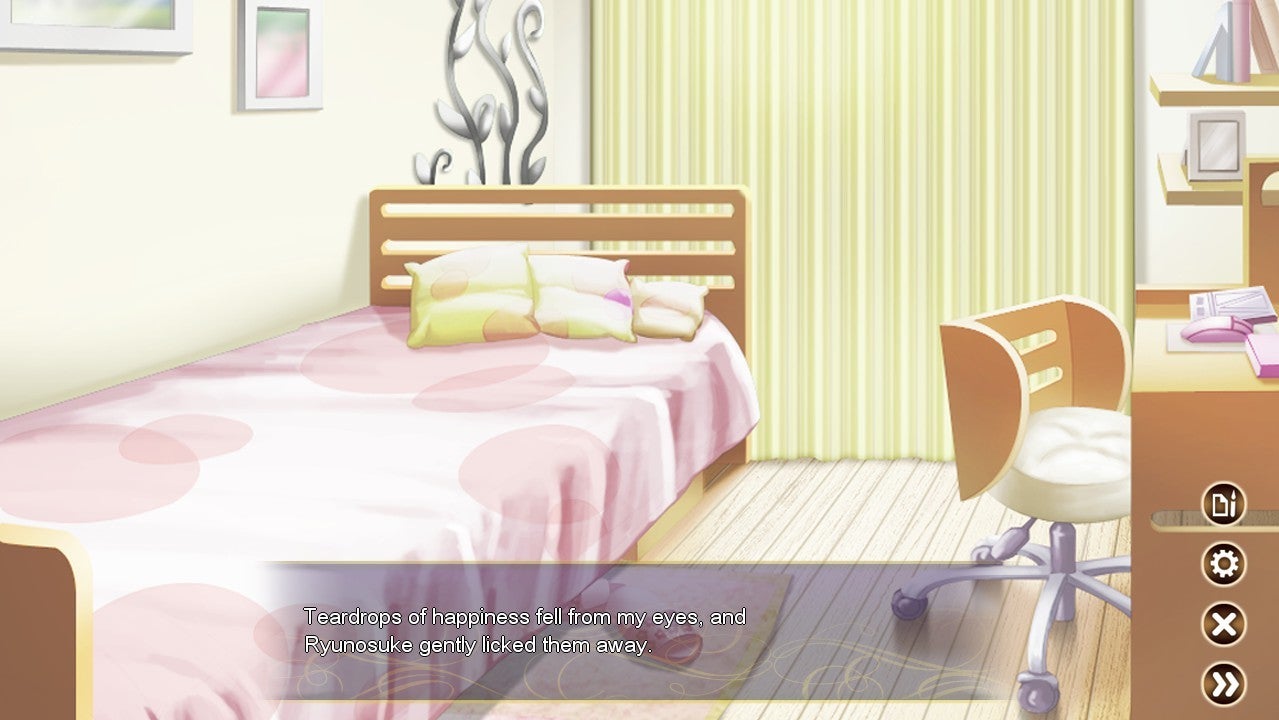 Perhaps in real life, I am not into older men. For me, it was a little weird to have a guy behaving in dad-like ways and then whipping his tongue out to hold a TED talk in my character’s lady lounge. But, at the same time, I’m disappointed that the men weren’t even older.

There’s one actual grandpa-like character, swanning around in his argyle sweaters and I wanted to take him out for a quick spelunking session in my downstairs cave. 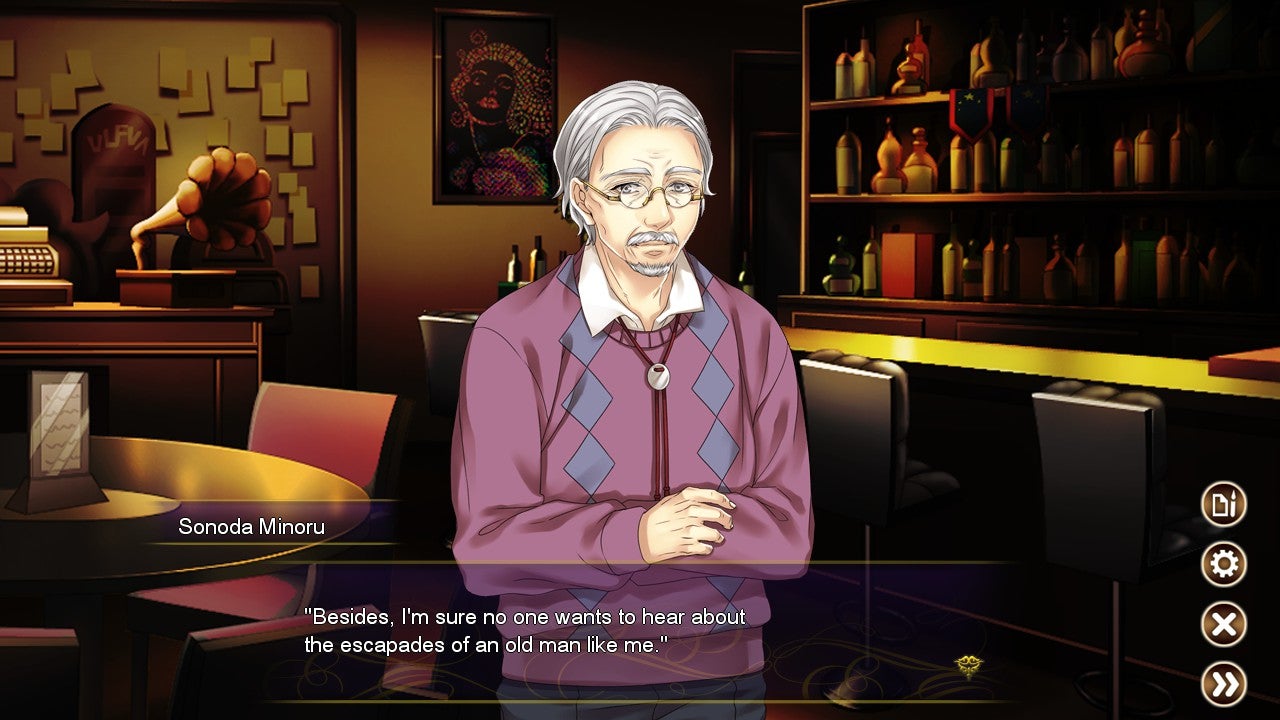 Wake me up when someone makes a game about geriatric men, please?