I Hated Until Dawn’s Emily, Until We Were Fighting For Our Lives

Until Dawn is one of gaming’s greatest love letters to horror movies. It conforms to and subverts the slasher paradigm so well that it often feels like playing through a long-lost classic film from the sub-genre’s early-’80s heyday. It’s creepy, atmospheric, gory and occasionally goofy.

The game is at its most shocking, however, when it abandons the slasher conceit entirely, and we learn what the real terror of Blackwood Mountain is.

Until Dawn, which was released in 2015 for PlayStation 4, trots out the tropes in its opening moments.

A year later, a group of friends (featuring genre archetypes such as the jock, the randy gal, the jokester dweeb, and the one most likely to be the Final Girl) return to the remote cabin in the snowy woods for some quality time.

The party splits up in time-honoured horror movie fashion, whether it’s to have sex, take a bath, or to retrieve a forgotten bag.

It doesn’t take long for a mask-wearing, knife-wielding killer to show up, and it’s the player’s actions that determine who will survive (cue scary music) until dawn.

Eventually it’s revealed that the masked killer is Josh, who hasn’t actually killed anyone. The entire thing was an elaborate ruse, meant as payback for the rest of the group, since it was their prank that led to Josh’s sisters’ disappearances on that fateful snowy night a year prior.

But there is something stalking (and potentially killing) the teens on the mountaintop, and in the game’s most thrilling and terrifying sequence, we finally come face to face with it. 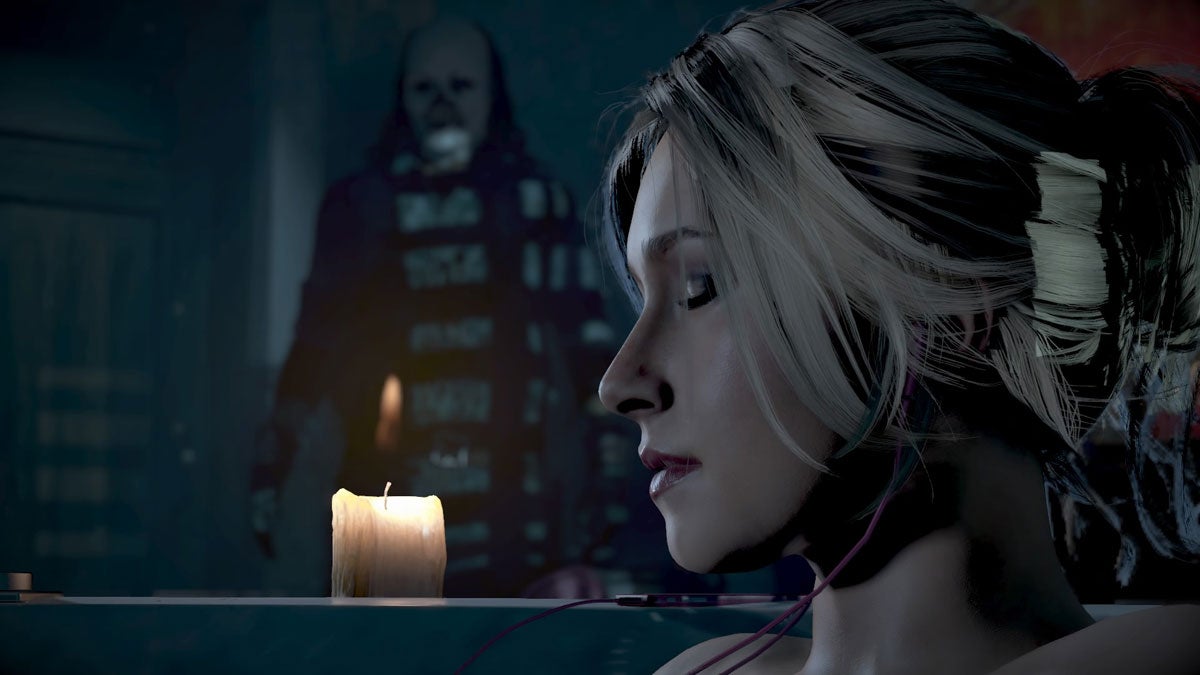 In Chapter 8, players are in control of Emily, Until Dawn‘s resident diva. She and her boyfriend Matt climbed an abandoned ranger tower and radioed for help. The tower collapsed, and the couple ended up in different areas of the disused mine that runs under most of Blackwood.

Emily is injured and hobbles through the empty mine shafts, looking for a way to power the elevator that leads to the surface.

She is chased by a another masked man, this one wielding a flamethrower. We’re not entirely sure whether he’s friend or foe, but he does give Emily a flare as he guides her away from an apparently more pressing danger.

With only the flickering light of that flare to guide her, she begins the trek back toward the elevator.

As she’s squeezing through a narrow gap between walls to progress, a huge jump scare signals the arrival of that “more pressing danger” – the Wendigo, a human possessed by evil spirits and transformed into a hideous monster after the person engages in cannibalism.

Emily screams. I scream. Players navigate through passageways, jump over gaps, and decide which direction to run as Emily makes her way to the elevator.

The creatures crawl up the shaft and stop the elevator, however, and she’ll have to make it out on foot.

More running and jumping, and then finally a conveyor belt ride to freedom.

That is, if you do everything right.

The action sequences in Until Dawn play out via on-screen prompts.

Some are standard button-pressing quick time events. Some are split-second decisions you must make on the fly. The most nerve-wracking require no movement at all as the player must hold the controller completely still, which is much more difficult than it sounds.

Most of these require fast reactions, with no margin of error. Make a mistake in any of these and there’s a good chance a character dies. As in real life, there’s no reloading a previous save. 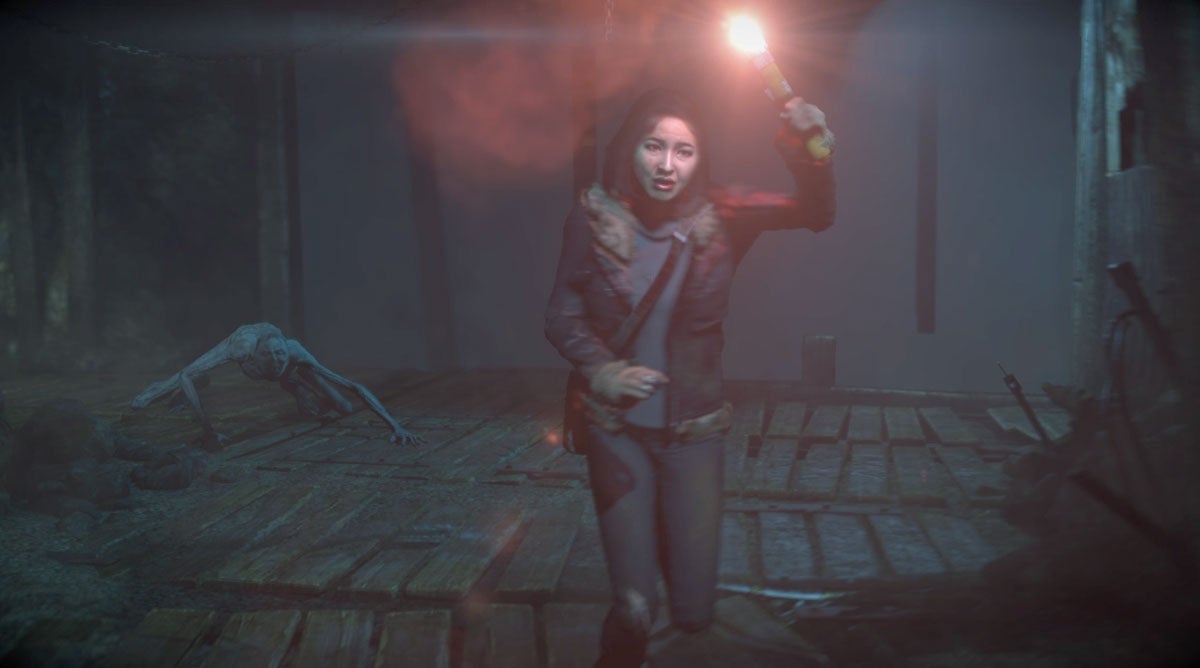 The first time I played Until Dawn, I was surprisingly successful in getting Emily out of the mine. I did everything right despite the fact that my heart was racing and my brain was screaming “WHAT THE HELL WAS THAT?”

The lanky, ghoulish, screeching Wendigos seemed straight from a nightmare. They scared me somethin’ fierce, not only because of the suddenness and shock of their introduction, but because they upended everything the game had thrown at me before.

Until this point, the game had been a slasher game with some Ouija board shenanigans thrown in for good measure. All of this was Josh’s doing, but all evidence pointed to there being another slasher killer loose on the mountain, most likely the mysterious stranger with the flamethrower.

Nothing had prepared me for the skittering, leaping creatures that were chasing me as I ran for my life. I mean… chasing Emily. They were chasing us.

I say “us” because by the time I’d gotten her to safety, I felt something like an actual kinship with Emily.

This is one of the surprising side effects of Until Dawn‘s adrenaline-inducing gameplay: We aren’t playing as “heroes” who anticipate the danger and come prepared. We’re playing through a rotating cast of dopey teenagers, everyday people who survive largely thanks to their wits and your actions throughout the game.

If you miss a prompt, react too slowly, make a wrong choice, or miss a clue, they will die.

The interactive nature of Until Dawn essentially buddies you up with these kids, and while they’re ultimately never really more than stock characters, you can’t help but be invested in their survival. 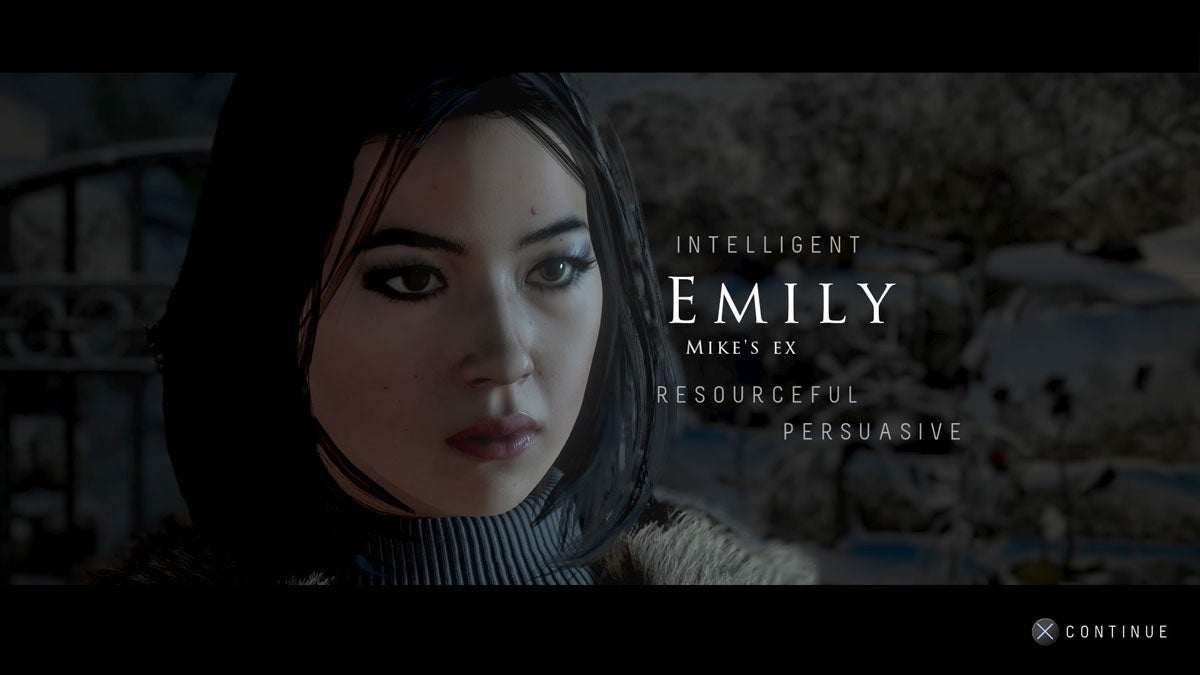 Still, I was surprised when Emily became my ride-or-die character in the game.

Before Chapter 8, she’d been nothing more than what I’ll charitably call a brat. She was rude and insulting to everyone, from her boyfriend to her ex-boyfriend’s new girlfriend and everyone in between.

There’s nothing redeemable about her character, and most players – myself included – end up disliking her so much that, early on, you look forward to being able to end her somehow.

Developers Supermassive Games seemed to anticipate this reaction, given that even if she survives the mine sequence, there’s an opportunity to kill her directly.

It’s impossible to avoid Emily getting bit by a Wendigo during her escape from the underground. When she ends up in a safe room with her fellow survivors, they’re worried about what may result from the bite, that Emily may turn into a Wendigo and kill them all. It’s possible to shoot her, killing her as a precaution. 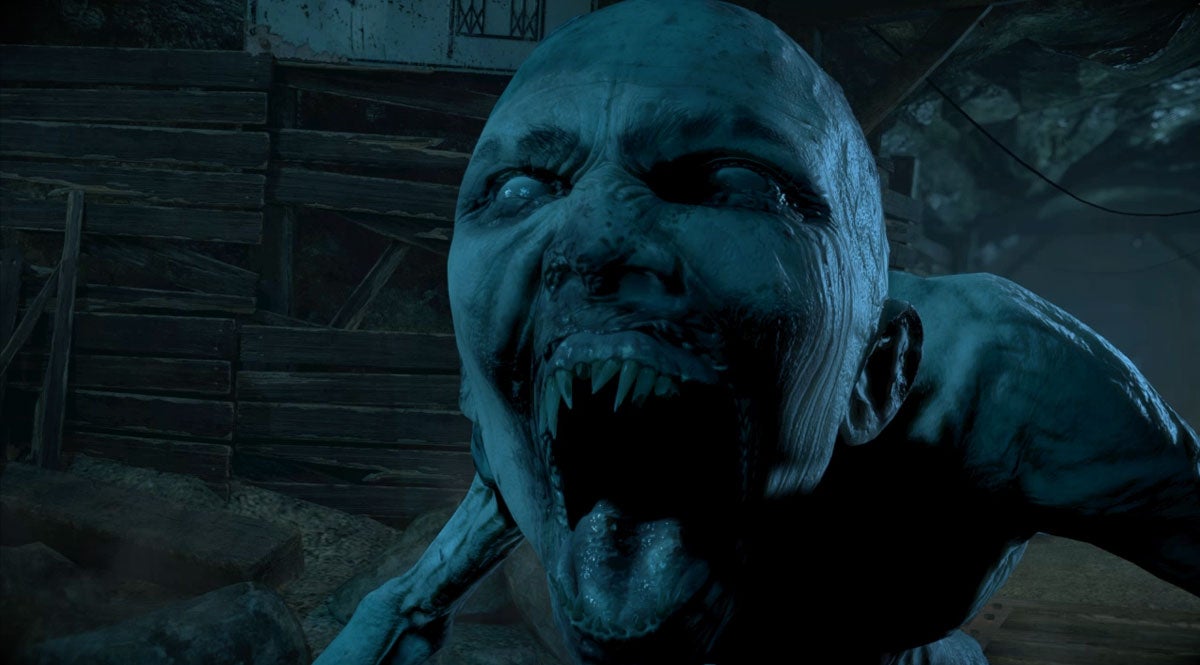 There was no way I was going to shoot her, though. She hadn’t grown as a character thanks to her experience in the mine, but she’d grown on me.

I was impressed by her telling herself to “breathe” and “snap out of it” despite the horrors chasing her, as it was clear that I was in more of a panic than she was. After all of it, I wanted her to survive to see the light of day.

Unfortunately, I made a stupid, impulsive decision in the game’s final minutes, and Emily died with a rescue chopper only moments away.

It wasn’t the only stupid decision I’d made, and she certainly wasn’t the only person who died (I only had two of eight teens survive, in fact). I regretted her death the most, though, thanks to that terrifying chase sequence we endured together.