In Argentina, A Pro-Choice Advocate Protests With A Doom Mod

With Doom Fetito, one game developer is taking Argentinian women’s fight for abortion rights into a new arena: the world of Doom mods.

Following a massive, 500,000-person strong march on International Women’s Day, the fight over abortion rights in Argentina heated up this year as the country’s government announced that it would consider legislation to legalise the procedure. Abortion is currently only legal in Argentina in cases where the mother’s health is endangered, or in the case of a pregnancy resulting from rape.

Thousands of Argentinian women go through abortions in clandestine facilities every year, being forced to pay an enormous amount of money for the operation, and risking their lives in the process. This law project has already been presented six times in the past, but only in the latest attempt has the government agreed to a debate.

Both pro- and anti-abortion rights advocates have been demonstrating ever since. Thousands of women throughout the country started organising marches asking for free, safe, and legal abortion in public hospitals and medical centres.

The anti-abortion rights group is smaller, but vocal and wealthy, and creates eye-catching displays. At one point, it created an army of little plastic babies that it marched with but apparently that wasn’t big enough. Back in April, a giant foetus made of cardboard showed up during a march, and it didn’t take long for it to become an internet meme.

Soon afterwards, a local game developer, Florencia Rumpel, took part in the Anti-Fascist Game Jam. She saw it as a chance to portray the topic in a game, which she called Doom Fetito, or “Little Foetus Doom,” a title that pokes fun at both the giant cardboard foetus and also the opposition movement that created it.

“I found a tweet comparing the cardboard foetus with a Half-Life boss, and I thought it could also be a good fit for Doom,” she said. Rumpel had already developed a game on the subject using Twine, in which a college student finds out she’s pregnant and goes through the process of deciding what to do. She can decide to have an abortion, but only through illicit means.

For an encore, Rumpel thought a Doom mod would be an interesting challenge. “I have loved Doom ever since I was young, and thanks to the Beyond the Filter episode and everything that Liz Ryerson wrote about the topic, I knew that making a mod for it would be a possible thing to do,” she said. 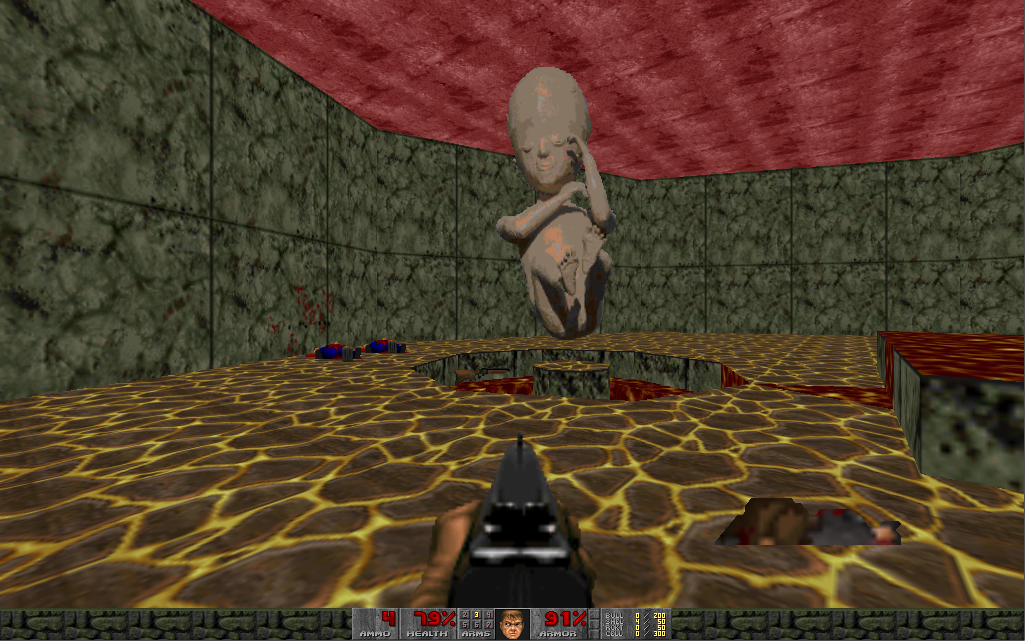 As the cardboard foetus has a major visual message, the developer thought her commentary should be equally visual as well. Although Rumpel has an already-extensive games catalogue on itch.io, it was her first time experimenting with a mod for a 3D environment.

Doom’s 3D isn’t entirely 3D, which made things a bit easier, since Rumpel only had to draw sprites from different angles, and not actual 3D polygonal models. In addition to police officers and the foetus, the mod features neo-Nazis, priests, and anti-abortion women.

She tweaked some of the assets in Doom to represent elements of the debate: The game’s medkits became misoprostol, a drug that can medically induce abortion. “The armour’s colour was changed for the green used in the bandanas representing free, safe and legal abortion,” she added. In an especially pointed bit of commentary, she used the Nazi characters from another Id game, Wolfenstein 3-D, to stand in for the police.

And then there’s the foetus. Rumpel designed its sprite from scratch, and placed it on the map as the final boss. The map isn’t exactly complex, but it takes a good fight to get to the end of the level, starting barehanded and shooting your way through the last few enemies with a shotgun.

When the foetus is killed, a medkit shows up beneath it, and the game showcases the following message: “You defeated fetito! Give this misoprostol to those in need so they might defeat it too!”

It’s a fairly gruesome image, but it’s more about ridiculing the ridiculous tactics of the opposition. Doom Fetito represents the fight of Argentinian pro-choice women against the anti-abortion rights groups, mocking the fact that their continuous attempts to raise their voice led to the creation of a six-meter tall cardboard foetus roaming the streets.

“What these anti-rights people were doing was plain ridiculous, and someone had to point that out,” Rumpel said.

Having over 10 years of documentation and assets available for Doom modders to use is another benefit of working on an older game, but Rumpel quickly found out that many sites hosting them are old, and links are usually broken.

“There’s also an specific order of actions to follow, and not respecting that methodology will cause your mod to malfunction and making the task of finding the problem way harder,” she explained.

As such, the mod isn’t quite all she hoped it would be. Adding attacks to the giant foetus fight at the end of the level was on her to-do list, but she only had a few days until the end of the game jam. Rumpel said she’s unsure about doing another mod for Doom in the future, as “modding a game is a time blackhole.”

“I’d love for the two games I made to stop being relevant,” Rumpel said. The law will go up for a vote in Argentina’s senate on August 8. “For now, the fight continues.”