I’ve never enjoyed a single movement in a video game as much as the Mega Man X dash jump. I could dash jump all day — off ledges, up walls, across pits filled with spikes. For all the double jumps, dodge rolls and infinite sprints I’ve encountered since, nothing has filled my heart with so much joy as slamming my thumb across two buttons at once to launch myself across the screen with equal amounts of control and ease.

The Mega Man X Legacy Collection, out this week on every platform but mobile, is split into two parts. The first contains X1 through X3, which were originally on the SNES, as well as X4 from the PS1 era. The second part contains X5 through X8, which are all PS1 or PS2 games that struggle with the shift to 3D.

Unless you’re a hardcore X fan, the first collection is all you need. And you do need it. I haven’t found anything since the original X games on SNES that have captured such a perfect mix of exploration and side-scrolling shoot’em up, and having them all in one place with the ability to switch back and forth between them quickly with only a few button presses is surprisingly nice.

(Mega Man X took the structure of the original Mega Man games and added wall climbing and small progression system by which X could have his abilities, such as charging up blasts, upgraded.)

There’s also never been a better opportunity to go back and experience the exceptional dash jump that put Mega Man X on the map and helped it, in the eyes of some (like me), surpass the original series.

In the first level of Mega Man X the titular character controls much like his predecessor, but by halfway through the Chill Penguin’s stage a capsule upgrade grants the ability to dash, opening up the entire rest of the game to be explored and mastered by letting X reach new areas previously inaccessible.

With that dash, players can move in circles around bosses who are otherwise impossible to avoid when simply running left or right. It’s a revelation being able to move in controlled bursts. X doesn’t move as smoothly as, say, Mario in Super Mario World, but that’s the point. X is a robot: Clunky but propulsive, with sharp shifts in momentum when accelerating and decelerating. 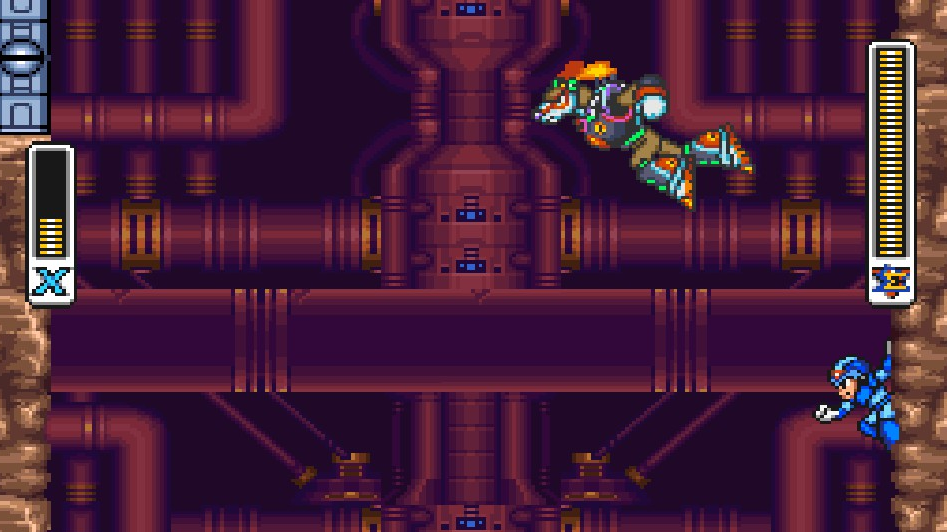 The Mega Man X dash is the opposite of moving underwater or feeling as though your body is weighed down and unresponsive in a dream. Instead, controlling X feels like the moment after putting on a new pair of sneakers when you realise how worn out your old ones were.

The way the games let you dash into a jump or perform both moves simultaneously to catapult off a wall or over an enemy is so good Capcom realised it was better off not gating the ability behind an upgrade you had to find for all of the later games.

Mega Man X2 includes a similar slate of upgrades for X to find, but dashing is there from the start of the opening level. A boss fight against a robot several screens tall puts it to great use as well, letting you manoeuvre through a maze of hanging platforms like they were monkey bars.

X2 is special for a lot of reasons, including adding just the right amount of conspiratorial story beats to add context to each level and fight without destroying the pacing, as started to happen by X3. There are also more collectables and secrets hidden across each level that make backtracking even more important without falling into the trap of becoming a tedious Metroid copycat.

The thing that most captured my imagination when I first played the sequel was how it played into X’s dash-enabled mobility by expanding levels and fights where possible. Overdrive Ostrich and Fire Stag in particular, while not very difficult encounters, are still two of the game’s most interesting for how they break with convention and push the classic Mega Man fight structure beyond the usual single screen-sized room enclosed by four walls.

Fire Stag’s boss area is a vertical cavern inside a volcano. He leaps up and down those walls and sometimes even goes off screen. Rather than contrasting with X’s abilities, he mirrors them, leading to a fun competition of seeing if you can beat him in the air rather than just outsmart him on the ground by memorising his attack pattern.

Overdrive Ostrich’s level is even bigger, expanding horizontally rather than vertically. The bird can bound across the stage much faster than X, but if X can slip past and run until it’s off screen, his silhouette will appear in the background running parallel with the player until he eventually leaps to the foreground.

The ability to run away during these fights, rather than feel trapped in a steel cage, makes Mega Max X2 feel even more liberating than the first game.

Of everything coming out this winter, I didn’t foresee myself falling back down the Mega Man X hole, but here I am breathlessly chasing every last health tank and capsule upgrade like it’s the ’90s.

The Legend of Zelda: A Link to the Past and Super Metroid get a lot of the credit for making the SNES one of the best console libraries, and there’s no shortage of indie games inspired by and trying to emulate them as a result.

The early Mega Man X games were masters of their own, weird hybrid formulas, and no one has quite managed to recreate it feeling better than the originals.