Monster Hunter But You Smooch The Dragons

Why Is This Dragon So Fucking Cute?? isn’t as graphic or particularly sexual as its title might imply, but it is very sweet.

A while back, I reviewed Angels With Scaly Wings, a dragon dating simulator that didn’t have nearly enough actual dating for my taste—although, as it turned out, maybe this is a recurring theme in my experience of dating sims.

But now I bring good news for everyone who, like me, was disappointed by the lack of scaly shagging: I just found a game on itch.io called Why Is This Dragon So Fucking Cute?? and instantly knew that it would fill some of the hole left by Angels with Scaly Wings. No, not that hole. Get your minds out of the gutter.

Now get your minds back in the gutter while I tell you about how Why Is This Dragon So Fucking Cute?? does what others couldn’t. 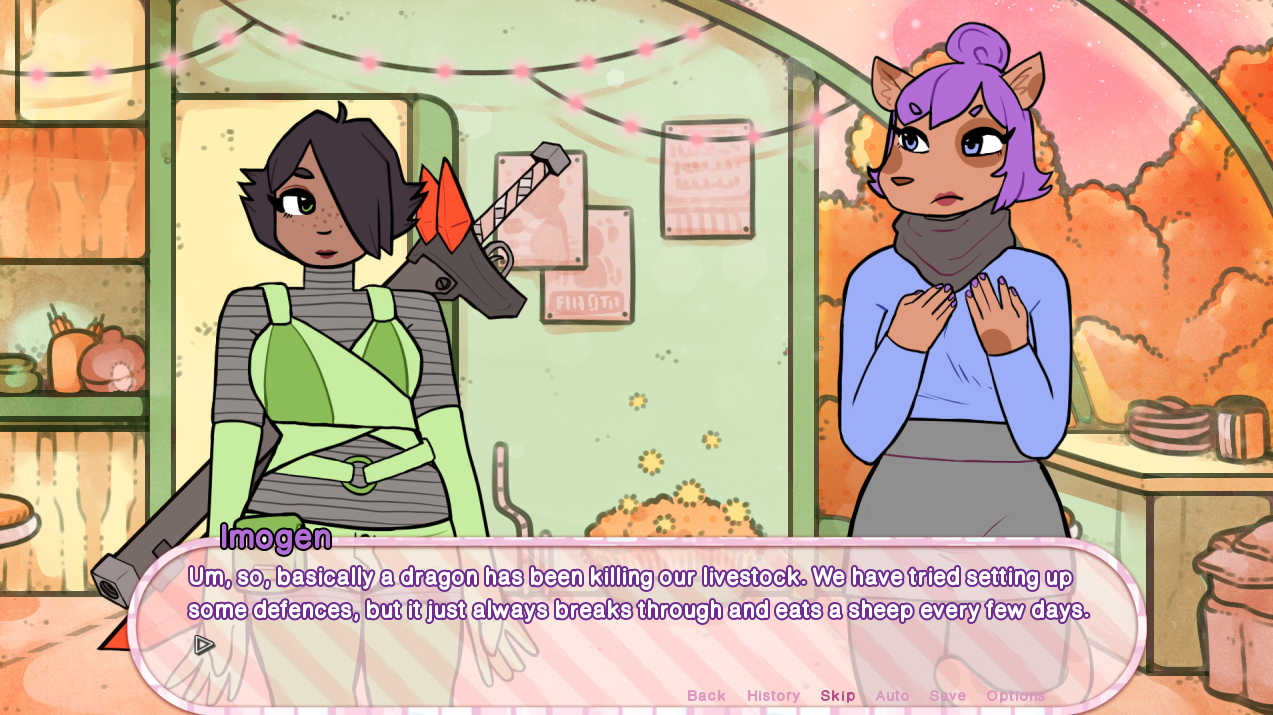 This visual novel is clearly a labour of love from main developer Nadia Nova, with music by Paige and Sinyk, and background art by DarkChibiShadow. It’s a fairly short experience with just a few different endings and only one “real” ending, the main romantic one.

The player character is a young woman named Amanda, implied to be a renowned monster hunter, but one who’s not too enamoured with her day job, perhaps.

Turning up at the doorstep of an innkeeper with monster troubles, Amanda offers her help in vanquishing whatever troublesome beast is bothering the locals, to the relief of the innkeeper.

Venturing off into the woods, she finds evidence of a bear, but gets saved by a stranger, who turns out to be a cute, anthropomorphic dragon lady, and it is there that our sexy story begins. 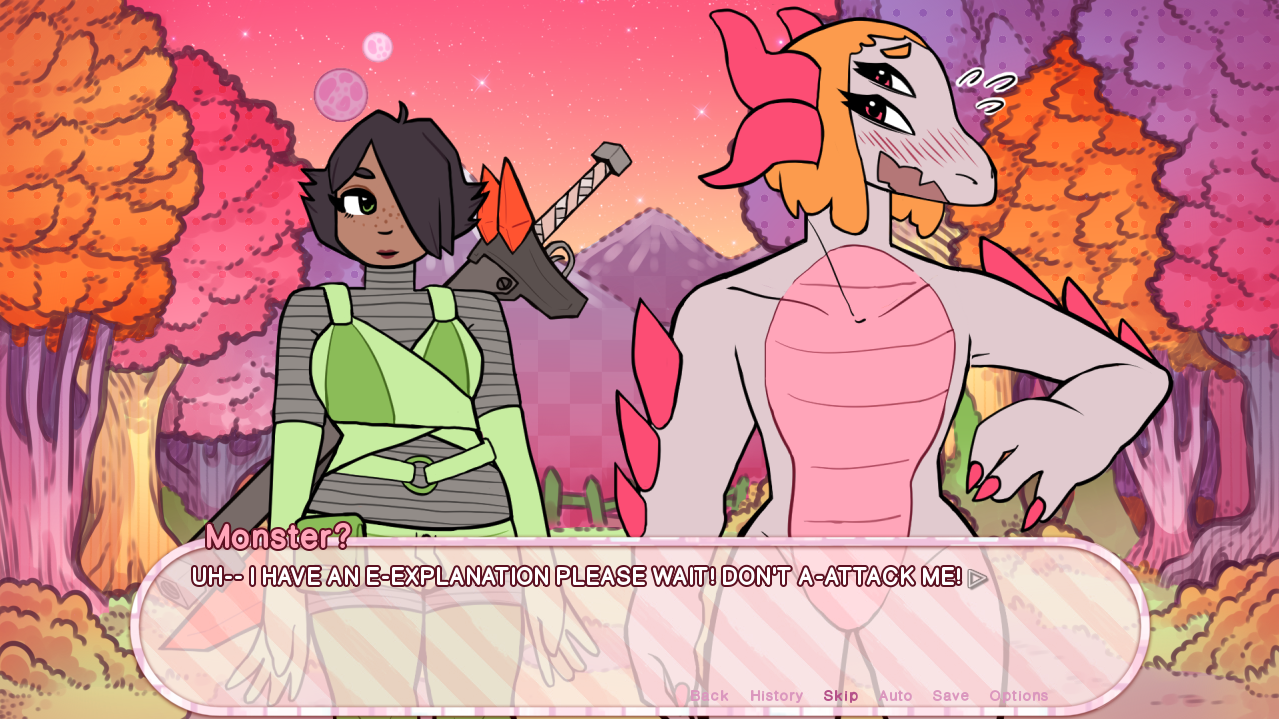 The player doesn’t spend a lot of time with Amanda or Orupheneth, the dragon—I spent about 15 minutes, perhaps, getting all of the endings—but it’s clear that Nadia Nova cares about these two characters, as evidenced in the digital artbook that you get along with it if you spend $US4 ($5) or more on the pay-what-you-want game.

In the artbook, Nova explains in very colloquial, chatty terms what her vision was when making the game. It’s rare to find a piece of literature so personal and honest, when artbooks are normally matter-of-fact statements of intent.

Nova’s artbook describes her simple desire to “make a cute game that deals with a brave gal falling for a goofy dragon,” as part of her larger opus of “humans coexisting with anthros.” 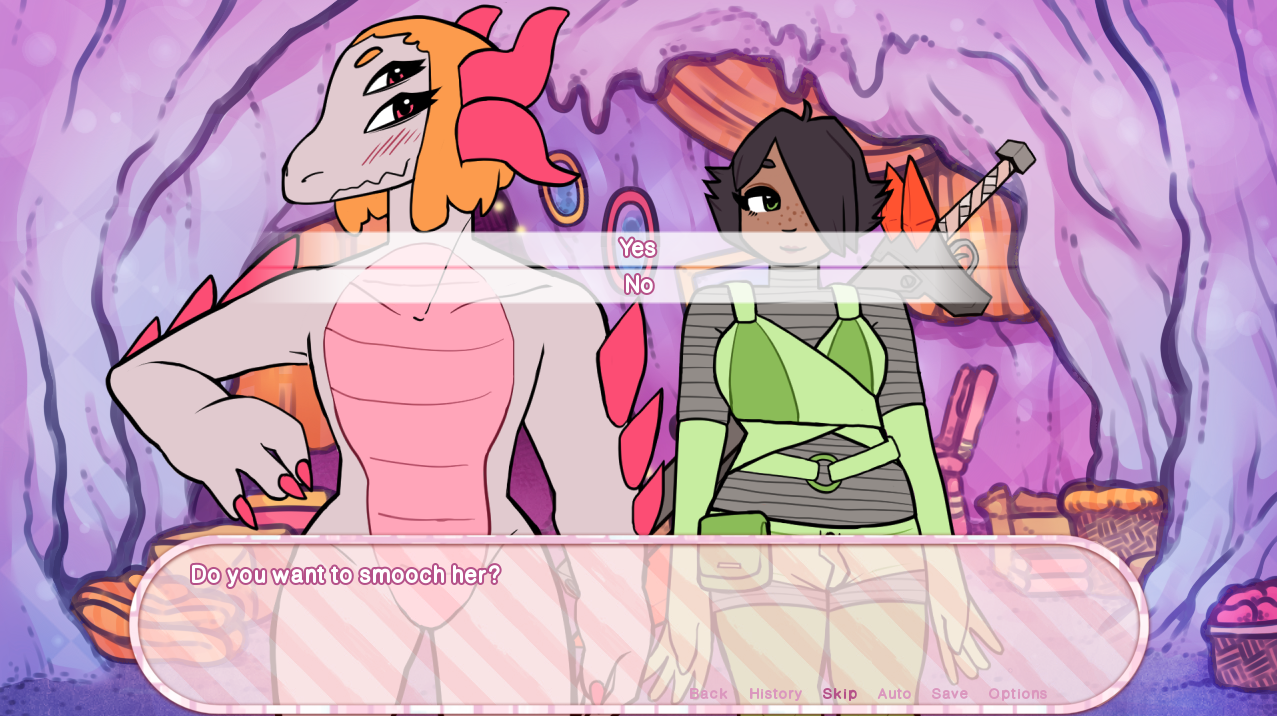 Why Is This Dragon So Fucking Cute?? is personal for Nova beyond just being something she wanted to do, though: “I’m mixed [race] too,” she writes, “so it probably colours these ideas I have about these perfect idealised fantasy worlds.”

Nova also mentions on the next page, in the description of Orpheneth, that the dragon character is trans, stating that “it doesn’t really come up in the game” because it would be “awkward” to start talking about genitalia in the middle of a short game about meeting people and falling for them. A planned sex scene was skipped due to time constraints, but Nova includes a (censored) drawing of Orpheneth naked that would have been included in the scene.

Nova’s way of talking about her characters and her world is casual, personal and intimate, the way you might describe a friend you’ve known since childhood. “Basically,” says Nova of DarkChibiShadow’s background art, “it’s like year 3000 or some shit like that. There is magic, and furries, and nobody knows why, but life goes on.” 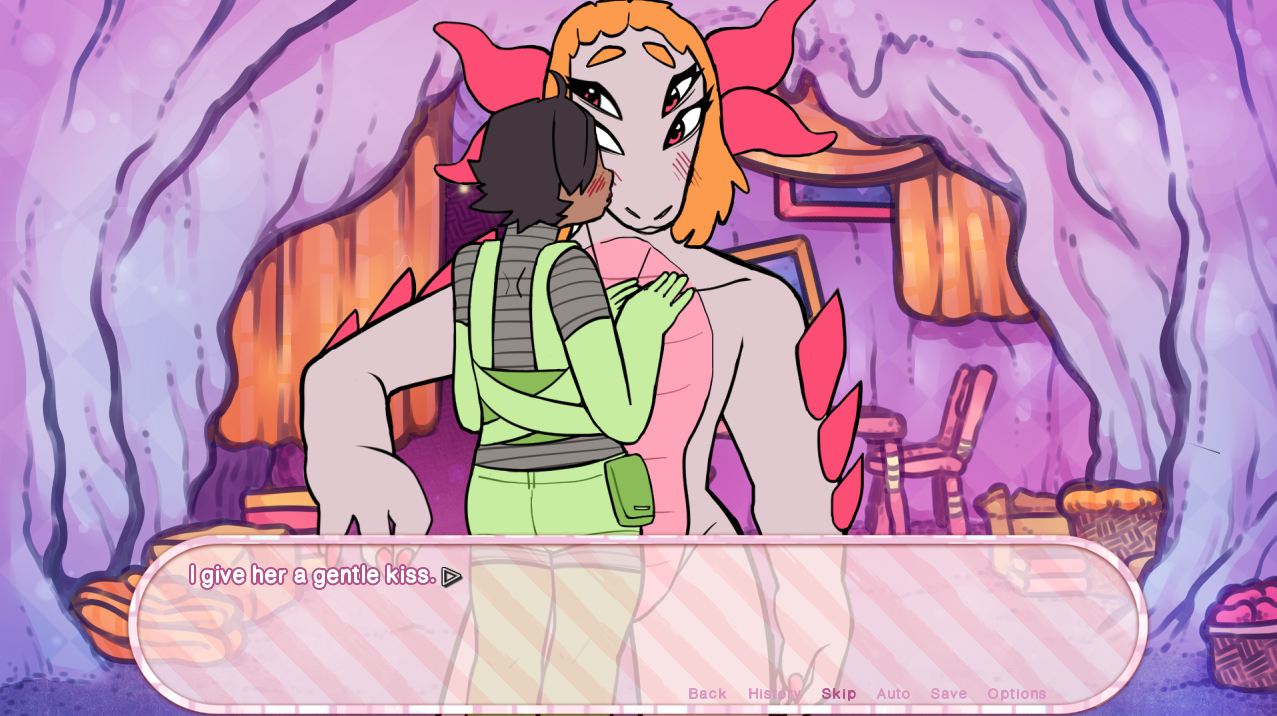 I’ve mentioned before that games on itch.io that deal with sex, sexuality, gender and dating tend to be far more personal than ones on Steam.

Why Is This Dragon So Fucking Cute??, despite its brief length, is another example. Steam releases, in general, tend to be concerned with marketability and a general appeal, probably in no small part due to the fact that Steam can cost the developer money to both publish and sell games on the platform.

But itch.io is free to use, taking a small, adjustable cut of the game’s sales instead. With an upfront cost, it’s much harder to release something that won’t do well or appeal to a wide market, because you’re already valuing your time at a negative amount of dollars.

With itch.io’s lower costs, only applied after you sell a game, the platform is more open to experimentation, games with personal messages, and in particular, games that deal with minority interests. 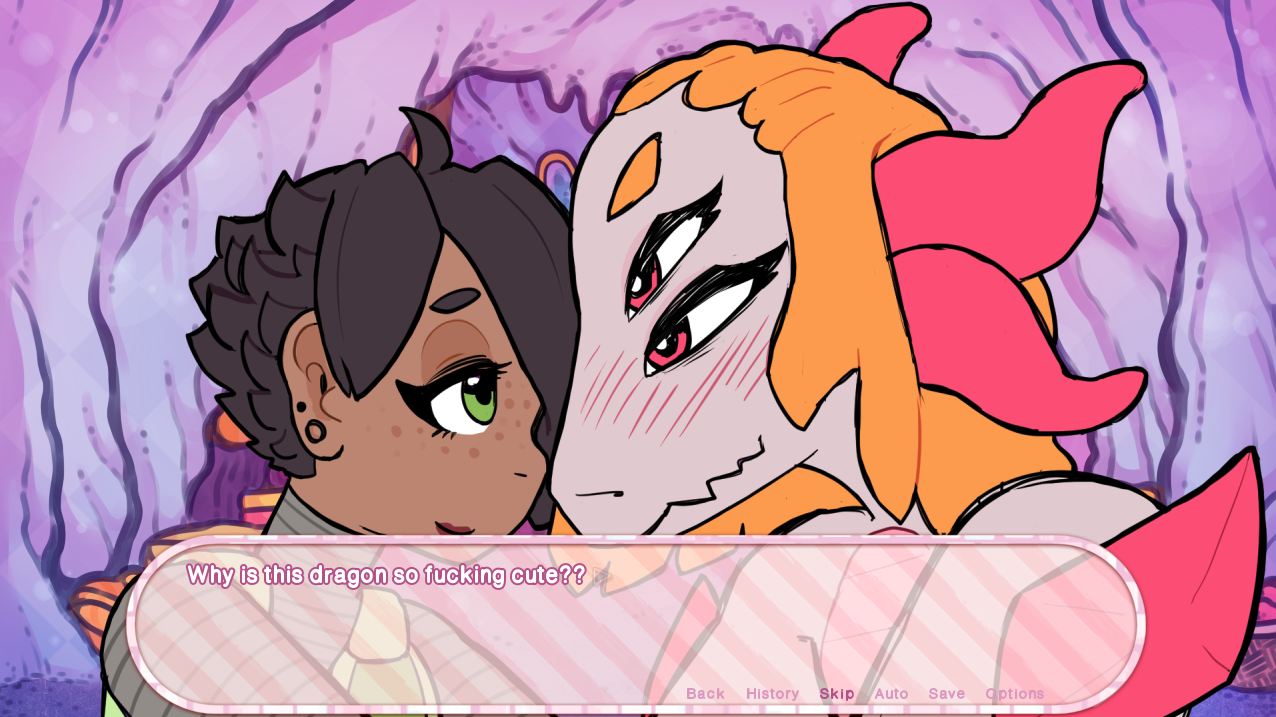 That’s where Why Is This Dragon So Fucking Cute?? comes from. It has been given space to be short, simple, sweet, and even a little experiential. This is not to say that either Steam or itch.io are better than the other, but they offer different experiences when it comes to games about dating, and on this particular topic (kissin’ dragons), itch.io won out.

Angels With Scaly Wings wasn’t the game for me. I wasn’t looking for a murder-mystery, nor was I hoping to find myself knee-deep in political scandal and diplomatic intrigue. I just wanted to date some dragons.

Why Is This Dragon So Fucking Cute?? might not be a 10-hour thriller, but it gets straight to the point, and in a satisfying, heartwarming way. I ended up taking Orpheneth home with me, with an open-ended, happy conclusion that left the coda of Amanda and Orpheneth’s story up my own imagination.