Hearthstone is a game about careful preparation, where you amass a grand collection of cards so that you can build powerful new decks. But this week, in the continuing rollout of its new science-themed expansion The Boomsday Project, Blizzard announced a card that ignores all that, allowing players to build a deck that includes this one card alone.

Dubbed “Whizbang the Wonderful”, the card is an unassuming 4-mana with 4 attack and 5 health. But then there’s the text: “You start the game with one of Whizbang’s Wonderful Decks!”

When you put Whizbang into a deck, your deck is done. Whizbang becomes your hero, and you’re not allowed to add any more cards of your own. When you start a game, you’re given one out of 18 decks built by Blizzard (two per class), which essentially means you get to play Hearthstone on random mode.

In the past, Blizzard’s premade “deck recipes” were blueprints that players could copy so that they could learn the concepts of deckbuilding. They centred around a theme, included a heap of cards that complemented each other, weren’t too expensive to build, and were easy to get the hang of. 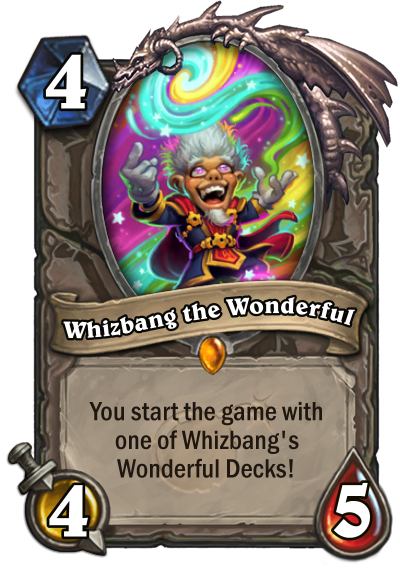 On the flip side, they weren’t very powerful compared to custom-built competitive decks that took advantage of the game’s strongest card interactions.

It’s pretty much agreed upon that Whizbang is actually a very weak card. Bringing a random cookie-cutter deck to the ranked ladder will almost always be a disadvantage. If your opponent pulls out a Whizbang deck, it’ll almost always look like a free win, or at least a match in your favour.

But calling a card bad is boring, especially when it does something so damn cool. So in the interest of embracing volatile variables, here are a few hypotheses for what Whizbang might bring to Hearthstone — some likely, others less so.