Every party member in Octopath Traveller has a special ability that allows them to interact with NPCs throughout the world. Ophilia the cleric and Primrose the dancer can temporarily recruit NPCs into the party and summon them during battles. One unassuming old man is able to unleash Hell upon enemies. I’m pretty sure he’s a retired jRPG protagonist, and he’s become one of my favourite allies to recruit.

You can find him in the town of Bolderfell, where Therion initially starts his story. It takes a little bit of work to recruit him. If you head down near where the tavern is, you can find an NPC guarding a house.

You’ll need either H’aanit or Olberic to challenge them to a fight. Once you defeat them, you can enter the house and meet a lonely old man. Don’t be fooled; this guy is awesome. 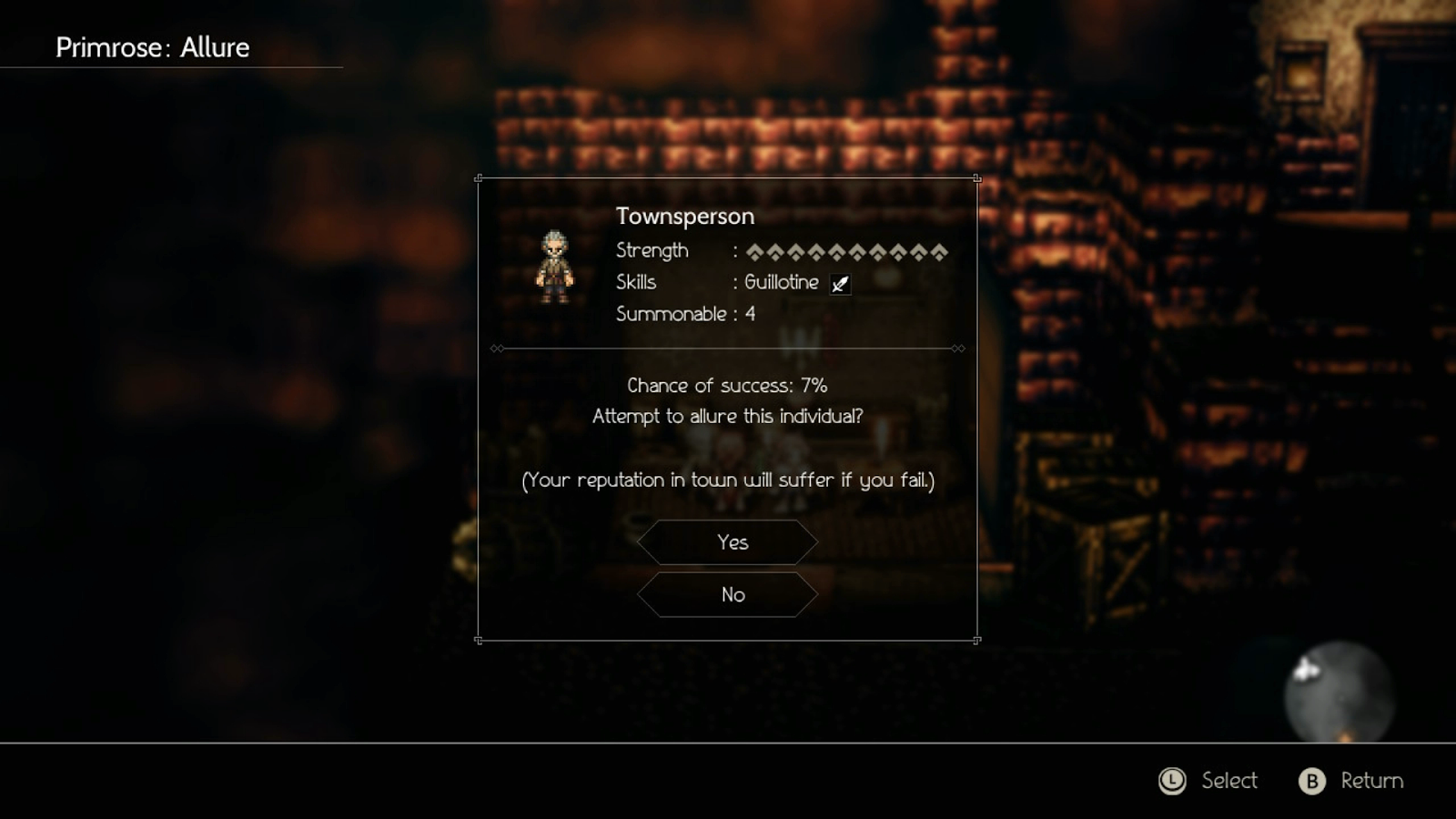 His strength rating is a ten, which is as high as you can go. Most of the NPCs you’ll find in the game’s initial chapters rank somewhere from a 3 to 6 at best. Meanwhile, this guy is hiding away in the slums and has a bodyguard. Presumably, this is prevent him from Hulking out and destroying the world. I was left wondering: what is this guy’s deal?

Octopath Traveller allows you to learn more about NPCs using either Cyrus’ Scrutinize ability or Alfyn’s Inquire. In this case, I learned that the old man was a wandering sellsword who had travelled with seven companions before they all eventually parted ways.

That’s right, this dude was part of a team of eight travellers who walked down paths and beat up monsters. An Octopath Traveller, you might say. At a bare minimum, he’s certainly some type of retired video game protagonist trying to live out his life in obscurity. Screw that, I thought. After some attempts with Primrose’s Allure ability, I recruited him into my party. The old man has a few powerful abilities that trivialize any fight you summon him for. He has a wide sweeping attack that can hit every enemy on screen, usually for excess of 2,000 points of damage. Early in the game, this means completely obliterating opponents.

If you summon him for boss fights — which usually involve a few flunkies fighting alongside the villain — he’ll get rid of the trash mobs in the blink of an eye. He also has an attack called “Guillotine” that attacks a single target for upwards of 6,000 points of damage. I’m somewhat ashamed to admit it, but I usually find myself heading back to the old man’s house to recruit him to handle my difficult fights.

Octopath Traveller’s stories can be a little underwhelming, especially since the main characters don’t interact with each other much. Thankfully, the world itself is full of hidden shrines and storied NPCs that help bring things to life. Search in the right places and you can find characters as interesting and powerful as any of the protagonists.