Rogue Legacy is a great game, but, five years after release, a few things were missing from it on PC. Cloud saves, for one, as well as key rebinding for mouse. Yes, there was actually a person who wanted to play Rogue Legacy, a side-scrolling platformer, with mouse controls, and the developers have finally made that happen.

It started all the way back on 24 June 2014, when a player going by the name Underhill made a post in the game’s Steam discussion page titled “DO NOT BUY THIS IF YOU LIKE THE MOUSE”. Underhill was upset that the game didn’t support their preferred peripheral and wanted to warn other players who might be similarly disappointed.

“Unless you love both hands on the keyboard do not buy this game,” they wrote. “You CAN NOT bind the mouse…this is literally a couple lines of code. the developers are ♥♥♥♥♥.” Underhill apparently uninstalled the game and never played it again.

The responses were less than sympathetic.

“I really want to know what would you like to do with the mouse in a 2D platformer game,” wrote one person.

“There’s really no need to play this with the mouse,” echoed another.

Underhill stood their ground. “The mouse hook is simple code, any developer or team capable of making this game knows how to do it and it should definitely be a part of the game,” they wrote back at one point. 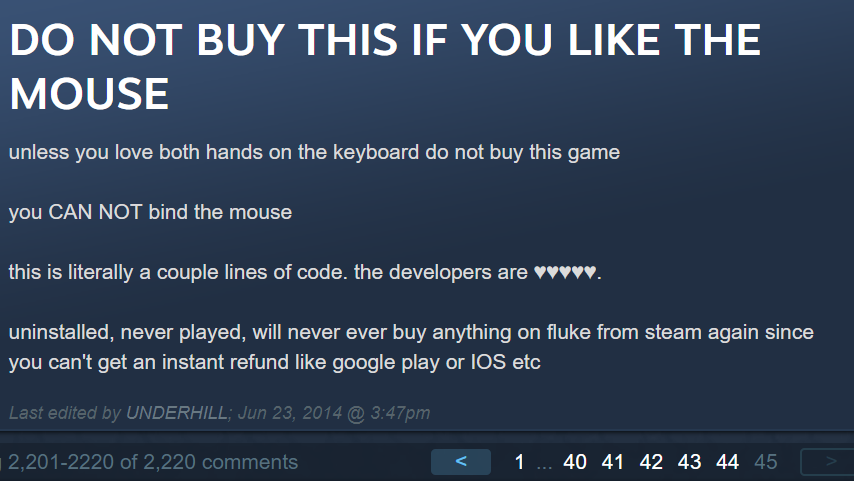 You’d think the discussion would have died down soon enough, but four years later the thread now has over 2000 comments and continues to get updated regularly. Underhill has long since abandoned the cause, but other Rogue Legacy players have continued shitposting to keep the topic alive. Sometimes they talk about the game, other times they just crack jokes.

“Worst thing is, you can’t sex badguy WITH THE MOUSE,” read one comment from a few weeks back.

Then the unthinkable happened. Developer Cellar Door Games actually added mouse controls to the game with the latest update on July 24.

“Mouse rebinding has been added,” read one small section of the patch notes. “2207 comments later and we finally got the message. I hope you degenerates are grateful!”

“lmao finally,” wrote one commenter in the thread in response.

Ryan Lee, Cellar Door Games’ business manager, told Kotaku in an email that mouse controls had actually always been planned for the game. “But it didn’t play well with the UI (you couldn’t click on upgrades in the skill tree, our menu systems didn’t support it, etc. So we removed it at the last minute,” he said.

Kotaku has reached out to Underhill for their take on the news and to find out whether they will try playing the game now that it finally has mouse controls, but did not immediately hear back.