I’ve always been curious about hunting sims, mostly because I want to vicariously wander around the woods. I’m excited to check out a recent one that just got ported to the Switch, but right now I can’t decide which character to pick.

Hunting Simulator launched for consoles and PC last year and arrived on Switch last week. You ostensibly track and hunt animals across a variety of locations, but first you must choose who you will be. The game gives you six characters to choose from, each with detailed descriptions.

In other games, character selection involves choosing among certain powers, relevant backgrounds, factions or appearances. Hunting Simulator’s descriptions, however, are all just detailed personality traits. They read like dating app profiles, and I’m finding them all equally compelling.

Alex Kelter, for example, “prefers to be alone” and is “adventurous and persistent”. 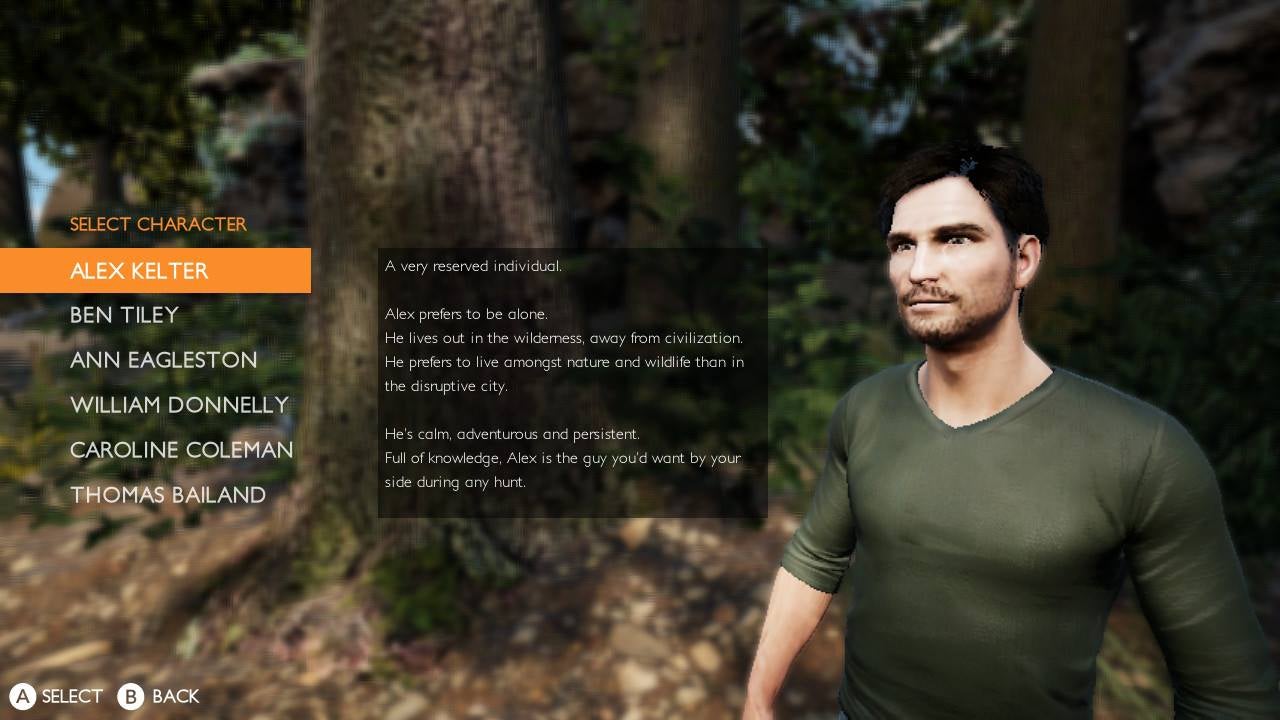 The game is straight-up telling me I want to pick Alex, since he would be “the guy you’d want by your side”. But why? There aren’t any skills attached to him, just that he likes nature, which seems relevant for a hunting game.

Despite not having a lot to go on, I feel like picking him would make him happy. As a chronic people-pleaser, I wanted to give him some solitary time outdoors, but what about everyone else? 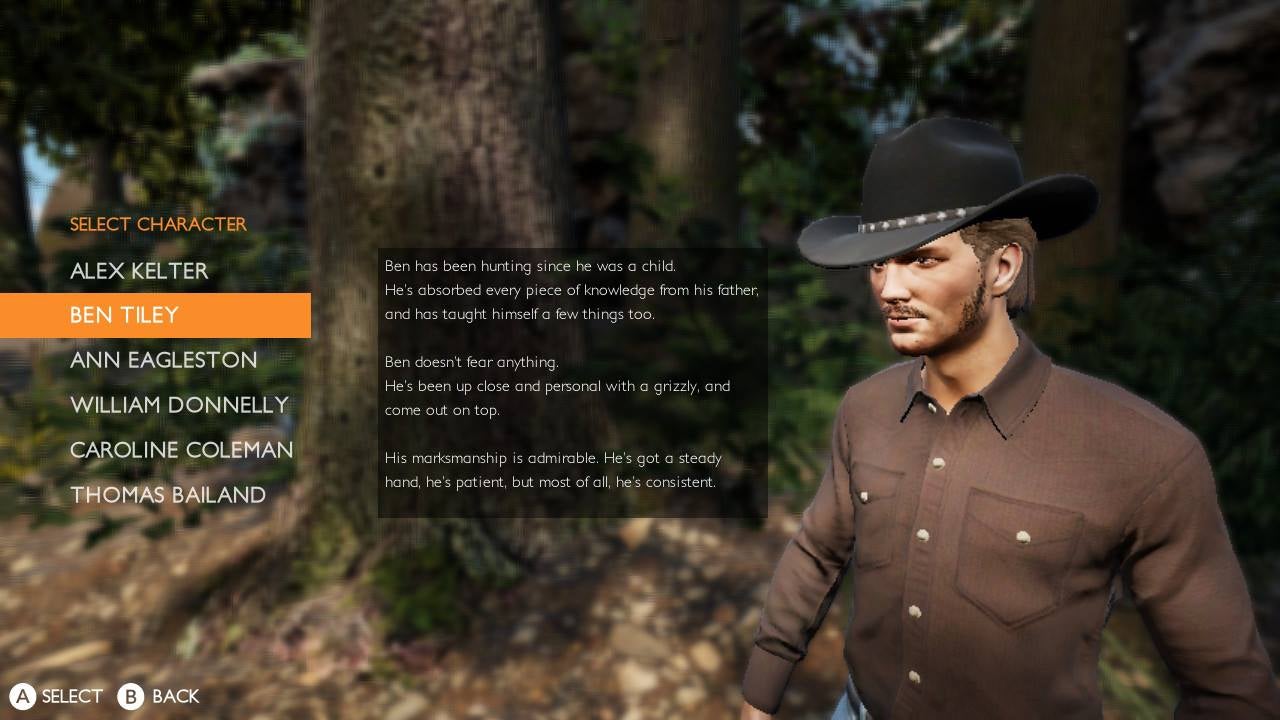 Besides clearly being a badarse who wrestled a bear, the connection to his father really drew me in. Will he disappoint his dad if I mess up? I’m new to this genre. I’m not ready for this guy.

Ann Eagleston apparently “takes pride in her appearance” except when she’s hunting. 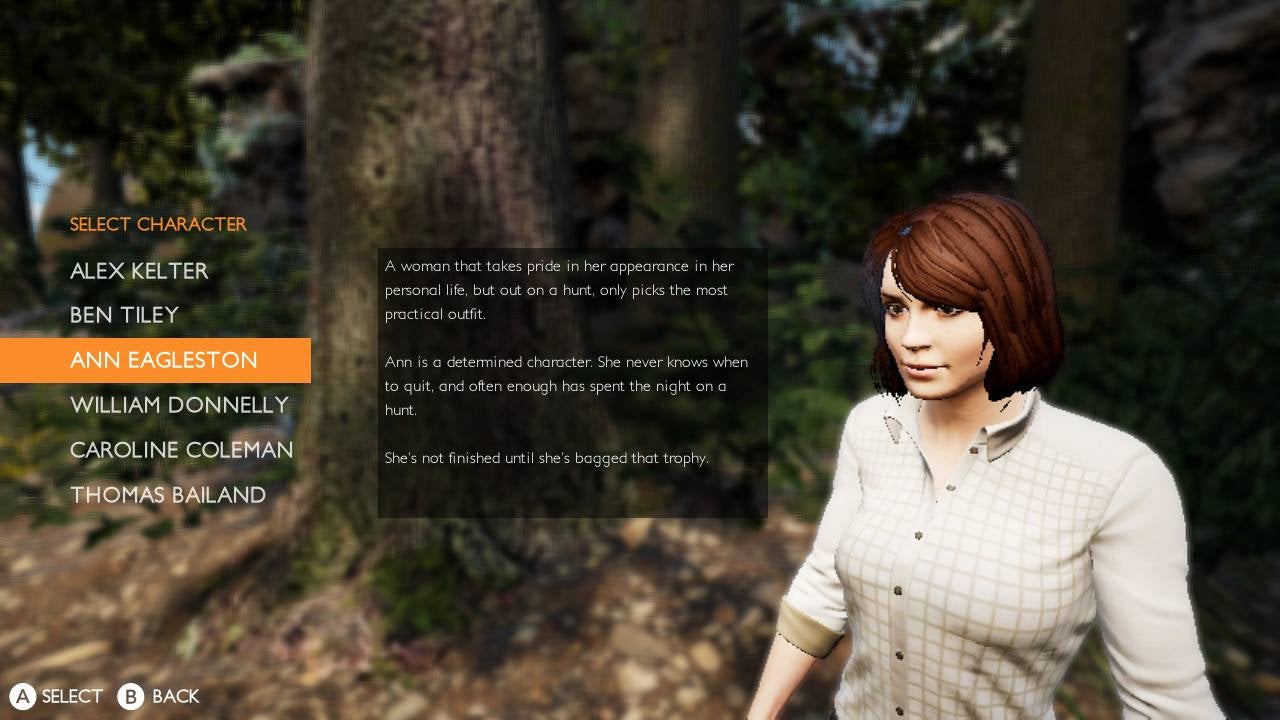 I’m not sure what to make of the bit about her clothes, which feels a little insulting. Is fashion over functionality a common hunting problem? Which one is the shirt she’s wearing?

William Donnelly likes to have “the last laugh”. 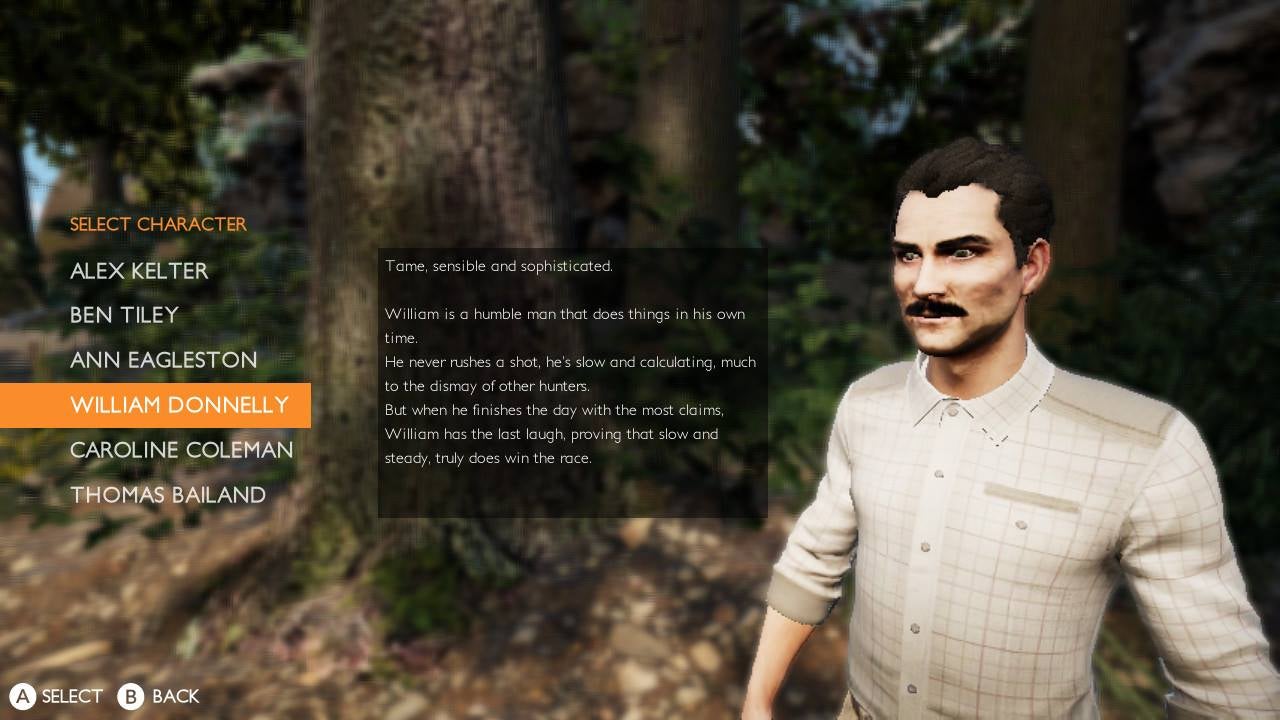 William is wearing roughly the same shirt as Ann, further muddying the fashion problem. His description reads like something a guy would tell you about himself at the bar after a few too many. The Burt Reynolds moustache is indeed “sophisticated”, but I’m much more intrigued to find out what “tame” implies. 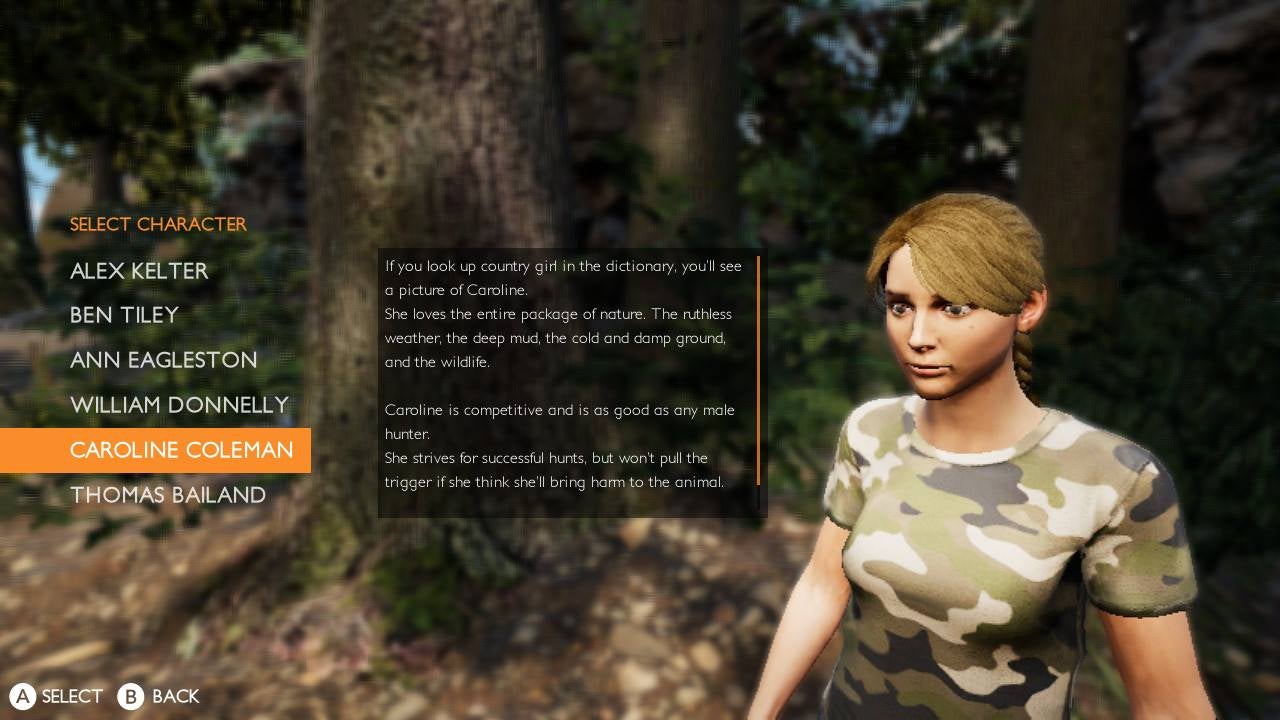 I feel like she’d get along with Ben, but they both have so much to prove. I don’t know if this plays into the skill level of the game, since you select difficulty separately. She feels a little too cool for me, which just makes me want to pick her more.

And Thomas Bailand “values all sorts of life”. 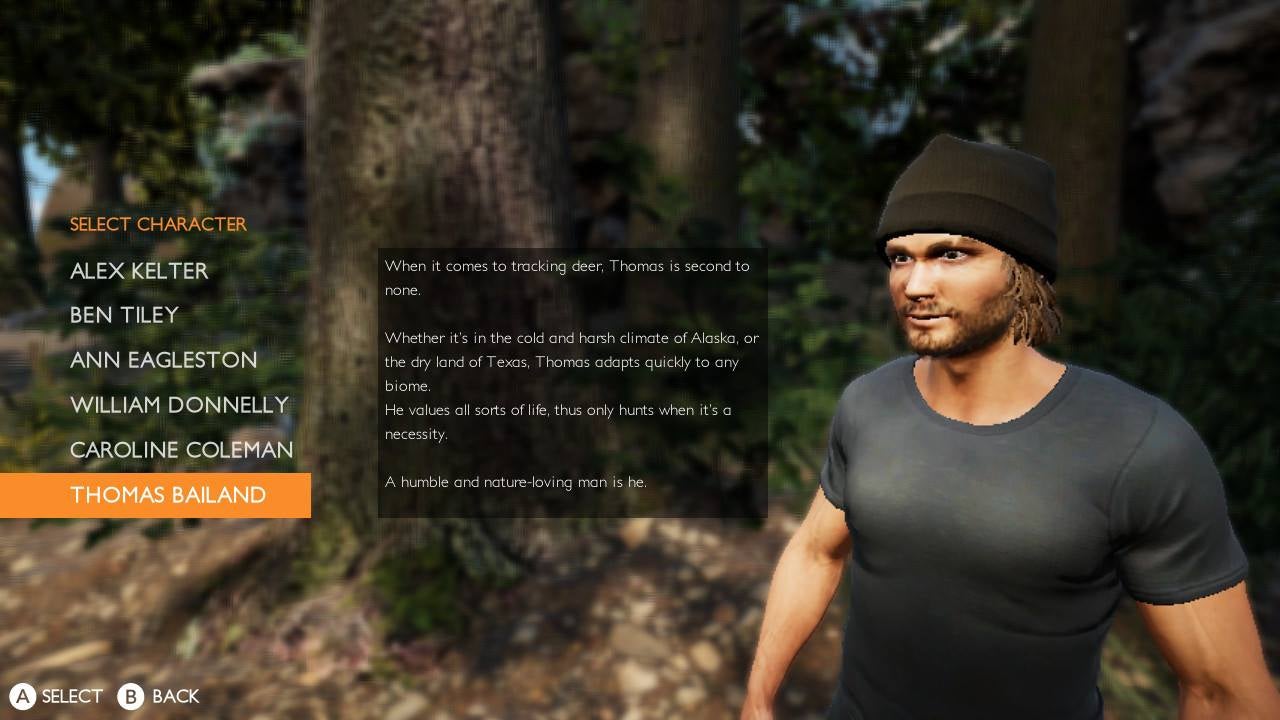 I don’t know how “humble” is going to help me here, but this guy sounds like the video game version of Into the Wild, which could either be a good thing or a bad thing.

As wild and relatively unhelpful as these descriptions are, I think they’re great. Their vagueness elevates character selection from a utilitarian decision into an aesthetic one. Who do I want to be in this game, not just in terms of skills or appearance, but as a person? What am I getting myself into?

I haven’t gotten far enough in Hunting Simulator to know how these choices play out. Are there cutscenes or dialogue that bring these backstories and personalities into play? Do they influence the areas you go to?

I hope they do something, but I’d also be happy just to have these traits banging around in my head as I play, giving extra meaning to following tracks and bringing down deer. Making up my own story is one of my favourite parts of sim games, so this could be a lot of fun — if I can decide who to choose.