What Could Possibly Be Scarier Than A Smarter Hulk?

comicshulkmarvelmarvel comicsthe immortal hulk
To sign up for our daily newsletter covering the latest news, features and reviews, head HERE. For a running feed of all our stories, follow us on Twitter HERE. Or you can bookmark the Kotaku Australia homepage to visit whenever you need a news fix.

Marvel’s new Immortal Hulk series already delivered a chilling opening story, re-introducing us to a Bruce Banner who’s starting to feel as though he’s simply along for the ride with a Hulk that’s more vindictive and dangerous than ever.

But its second issue has thrown an intriguing wrench into the mix that makes Bruce’s plight even scarier.

Ever since it’s been revealed that the Hulk is immortal — and that Bruce Banner very much isn’t, repeatedly being pulled from eternal slumber by the creature within him — both Bruce and Hulk have been on a dark path, attempting to keep themselves cut off from the superhero world they were once part of while the Hulk metes out a brutal level of justice against any wrongdoer he comes across.

This time, the “villain” of the month — a gamma radiation scientist named Dr Frye who, like Bruce himself, has been transformed into something more in the wake of an experiment gone horribly wrong — is less outwardly criminal than the robber-turned-murderer we met in the first issue.

That said, his actions to cover up the experiment have lead to the slow, painful deaths of multiple people.

But in the process of figuring out the strange calamity afflicting Frye’s small hometown, Bruce reveals an altogether more chilling new twist in his relationship with the Hulk: Bruce isn’t as smart as he used to be. 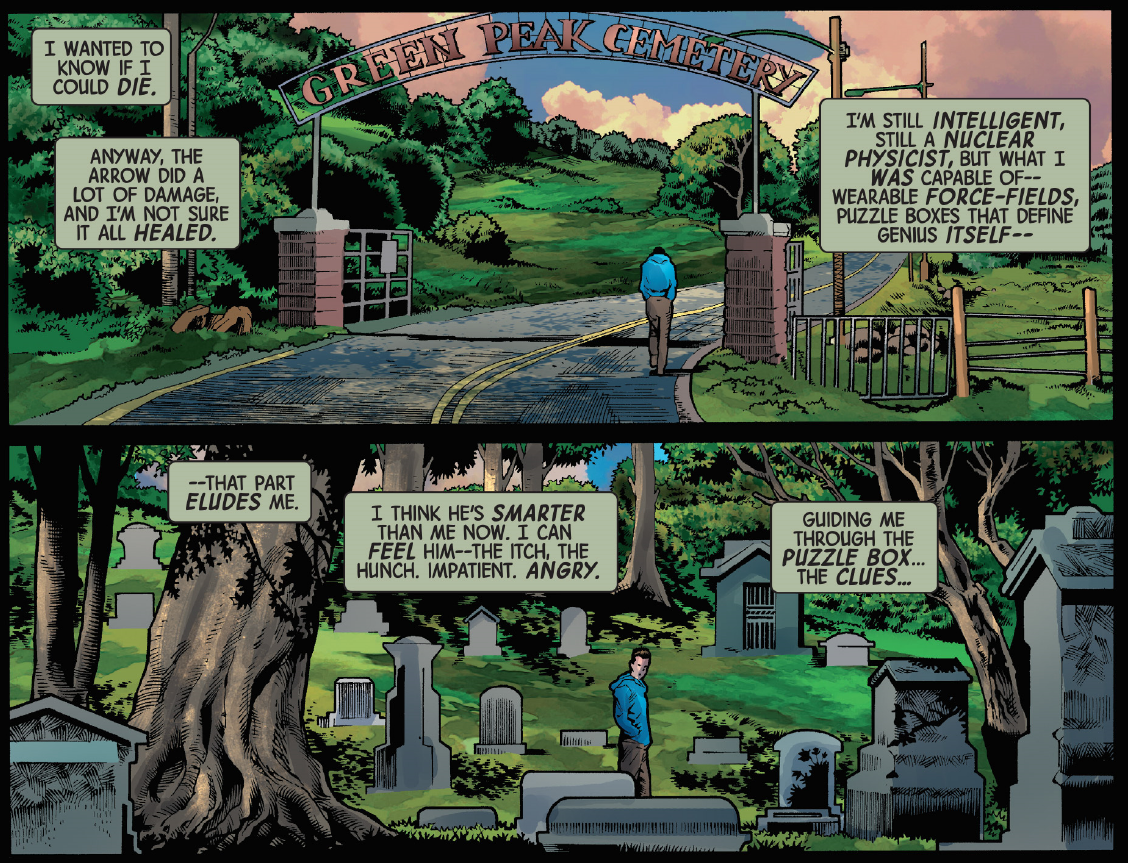 He’s still a scientist, of course, but he’s no longer capable of the superhuman feats of ingenuity and scientific thought he once had as one of Earth’s mightiest heroes. Each time he’s come back, dragged back by an increasingly more impudent Hulk, part of his former self has faded away.

But that isn’t the case for the Hulk, who is increasingly getting more and more articulate when he is out, and even when Bruce is “normal” he is an ever-present force, guiding Bruce mentally through itches and sensations to investigate potential injustices.

Bruce’s narration as he investigates the mysteries of Dr Frye reveals the newfound imbalance in his relationship with the Hulk — there’s a level of wearisome acceptance in Bruce now that he is no longer the person in control.

He isn’t containing the Hulk and letting go whenever he transforms; instead, he’s little more than a shell, and when the Hulk wants to appear — as he does when Bruce finally finds the glowing, radiated form of Frye skulking about in a cave — he just does.

The unpredictability that has defined the Hulk as a character for decades is instead replaced here with a grim, petrifying inevitability. 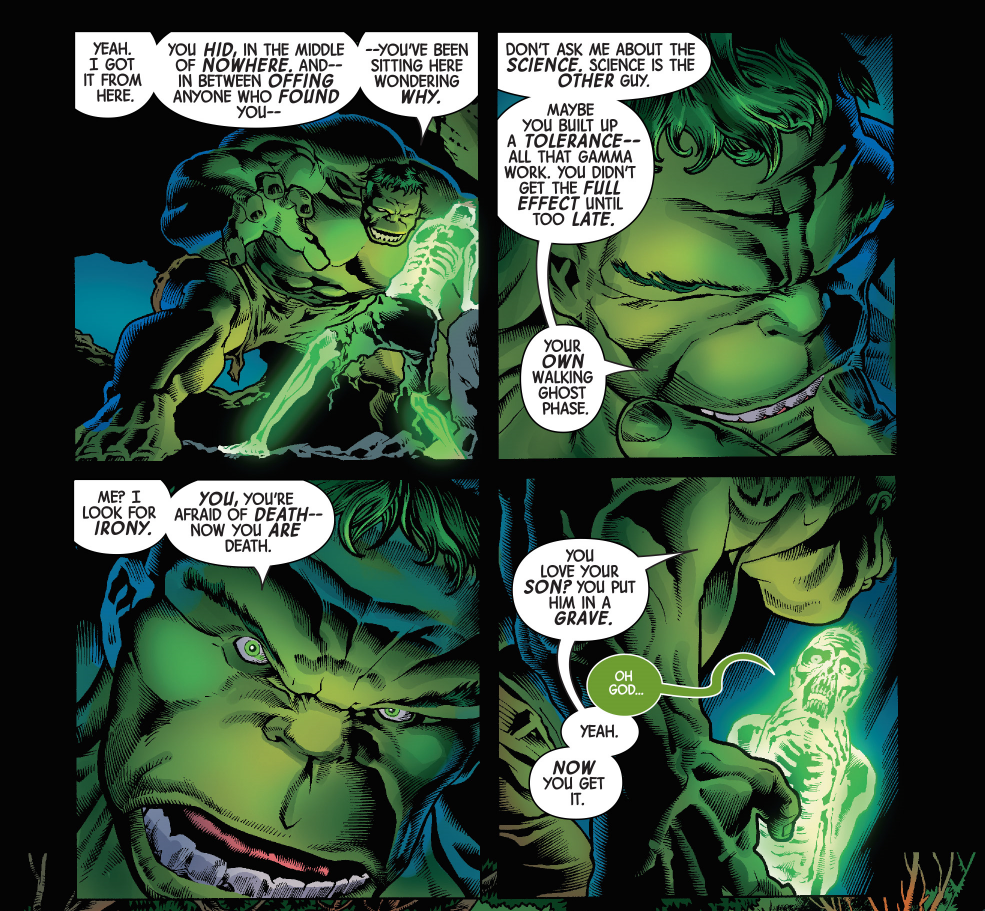 The Hulk’s newfound intelligence isn’t exactly like Bruce’s — as he tells Frye, he doesn’t care for science, that’s the job of “the other guy” — but it comes out instead as an uncaring, unflinching vindictiveness.

Bruce Banner means so little to the Hulk now that any humanity Banner might impart is absent from the Hulk’s thoughts.

To this Immortal Hulk, there is no greater justice than an ironic punishment. Instead of killing Frye for his careless coverups, he traps him deep between layers of rock, removing Frye’s limbs so he can’t escape. He’s claustrophobically forced to live out a half-life in abject fear, longing for the death he desperately sought to avoid in the first place.

It’s a form of justice, yes. But it’s tinged with a knowing cruelty that has made this new version of the Hulk far scarier than he’s ever been.