A lot of games these days have a pretty standard two-pole alignment system: You’re evil, or you’re good. Hero or villain. Paragon or a Renegade. Jedi or Sith. Which is good and all, but once you leave the realms of childhood and politics behind, you realise that the world is more complex than goodies and baddies. People are more complex. You need an alignment system that captures this complexity and lets you roleplay better. Dungeon & Dragon’s 3×3 alignment system is one of the other archetypes. On one axis, Good-Evil. On the other, Law-Chaos. On one hand, the alignment system makes a certain sort of sense. An honourable true paladin really ought to be Lawful-Good.

Having a rogue be Chaotic-Good is a way to explain how someone who steals for a living might consider themselves a Robin Hood sort of character. One of the former editors of Gizmodo told me he constantly used the D&D alignment system figure out people.

On that scale, I’m definitely chaotic-something.

But it’s a bit constricting, as well.

Having done a lot of online, writing-based role-playing recently (I play on Storium), my role-playing has shifted towards developing character and telling story, rather than solving puzzles and defeating monsters.

So I’ve found the Good-Neutral-Evil / Lawful-Neutral-Chaotic schema of D&D to be too constricting when trying to portray a good, well-rounded characters.

Real people are a mess of conflicted emotions and feelings. We do virtuous things and sinful things all at once. We do noble things for selfish motives and atrocities with the highest of intentions. That’s hard to capture when your D&D alignment is a relatively static thing.

In one D&D group, we debated about whether me role-playing my profit-focused former con artist-come-mage was really chaotic neutral (I do whatever the hells I want, and yes, I’ll take the money if no-one else is looking) or neutral evil. And it was an odd debate because my character was entirely self-consistent, but didn’t precisely fit in a good D&D box.

One of the things I appreciated about Planescape: Torment was that it made my alignment fluid. If I started acting too chaotically, it would shift me in that direction. If I started behaving noble and charitably, I’d move towards the good alignment. Baldur’s Gate featured a similar thing in a more dramatic fashion, and “turning” Viconia or Anomen were thoroughly enjoyable sideplots.

I guess in real life, sometimes people do have “Damascus experience”, and at other times, they change their lives slowly, step by step. 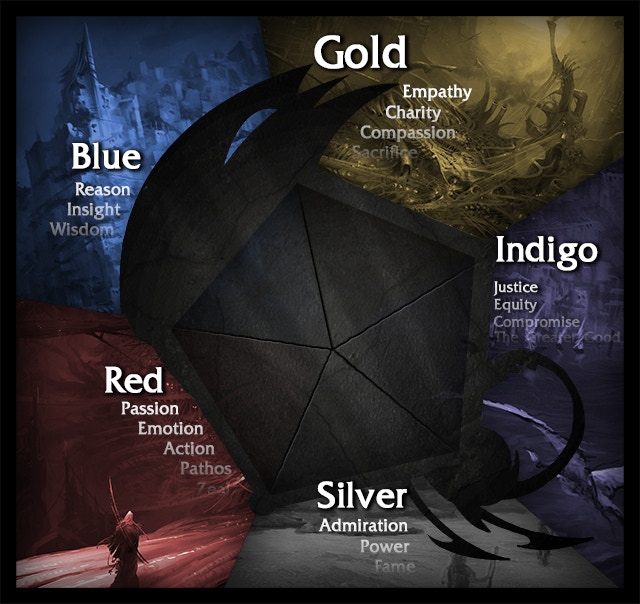 One of the most interesting aspects of Torment: Tides of Numenera was the entirely different alignment system that placed the five tides at right angles to Good or Evil per se.

You align to a tides based on how you are perceived, irrespective of your motivations. As far as the tides are concerned, being greedy and being thrifty are the same side of the same Silver coin.

Someone who selflessly gives money to charity for the greater good, and someone who gives for the public recognition are both regarded as Gold.

For a video game, this was an excellent design decision methinks, because it doesn’t try to double-guess your moral choices underlying your character actions. Tides of Numenera, just like its illustrious forbear Planescape: Torment, are very much about pushing the role-playing limits of the underpinning role-playing system.

If you’re curious, here is a breakdown of how different tides would answer different questions, prepared by the good folk at inXile.

This is the other system that always comes up. It has it’s flaws — such as the fact that one house clearly says “Hero” and another “Villain”. But there’s a moment of realisation that most young people come to — when they realise it’s quite okay not to belong to Gryffindor.

After all, Harry’s friends have the great Hufflepuff trait of loyalty, and I’m with the crowd that think Hermione should really by Ravenclaw (I don’t care if you disagree, come at me bro). And as James Potter’s gang of four prove, celebrating bravery can just as easily turn to bullying.

I’ve also been appreciative of several HP fanfics that try to cast Slytherin in a more nuanced light than merely “the evil house” — one can be equally ambitious to help others as to serve oneself. Just because all Death Eaters come from one house mean nothing other than that Death Eaters recruited those they knew and trusted. Right? Right.

Anyway, it might not surprise you to know that I consistently poll Slytherin. #sodamnedSlytherin and proud.

Anyway, if you need a refresher, I’ll let the Sorting Hat sort you out:

By Gryffindor, the bravest were
Prized far beyond the rest;
For Ravenclaw, the cleverest
Would always be the best;
For Hufflepuff, hardworkers were
Most worthy of admission;
And power-hungry Slytherin
Loved those of great ambition.
– J.K. Rowling, Harry Potter and the Philosopher’s Stone

It’s okay to be Hufflepuff. We’ll let you serve us *evil grin*. 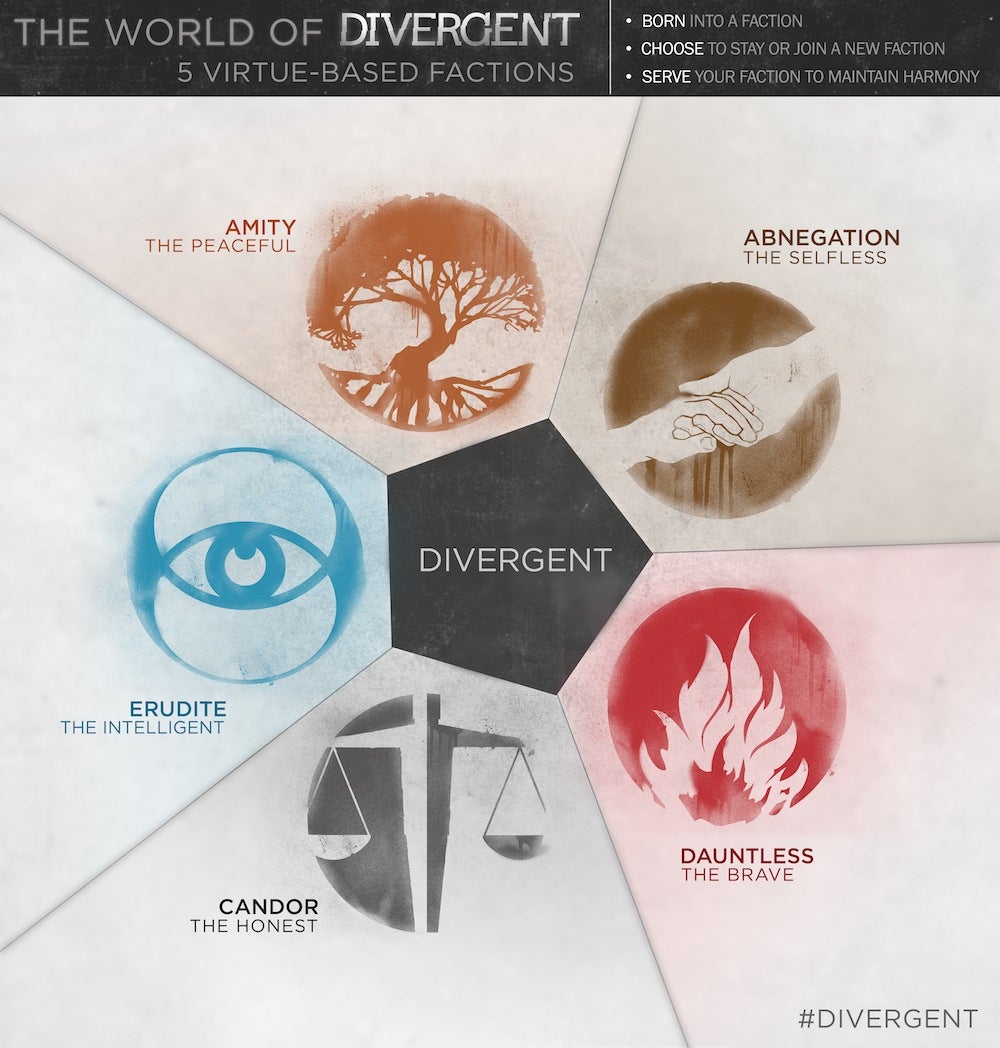 The very excellent young adult novel by Veronica Roth, Divergent (which was then followed up by two less-than-excellent but still-readable novels Insurgent and Allegiant, and a movie trilogy that became exceedingly far from awesome), presented a very neat system of alignments in a very bizarre setting.

Society has been broken up into five different tribes or factions. Come adolescence, teenagers take an aptitude test, and then take part in a Choosing Ceremony, where they choose which faction they want to join.

If you have a world-building sort of mind and you read the book trying to figure out exactly how such a world comes about, you may become somewhat frustrated, because you’ll think there’s no way such society would come to this sort of arrangement so naturally.

Finding out the arcane history of this system is very much the journey of Tris (short for Beatrice) as she discovers and upends her world, but the short answer is, it does make sense. Exactly how would be spoilers, so I’ll stop talking now.

Long story short, there are five factions in Divergent, and as archetypes they seem slightly more balanced than the Hogwarts Houses. They are:

That sounds all well and good, but each of the factions are excessive caricatures of their virtues. Abnegation are so selfless that access to mirrors is rationed.

You wouldn’t want to look too beautiful to make others feel bad. And Dauntless take bravery to the point of permanent adolescent idiocy. For instance, their primary mode of transport is train-jumping. Amity bring peace by supplying happy drugs in the water. Actually.

What’s your favourite alignment system? One of the above? Something else entirely?