Battle For Azeroth Is More Exciting When You’re Horde

Man, why did I waste two weeks questing through boring green hills for the Alliance when I could have been exploring dinosaur-infested swamps as a mighty Cowadin? Even in the middle of the Battle for Azeroth, the Horde have it good.

I know, I pledged myself to the Alliance before World of Warcraft’s latest expansion Battle for Azeroth came out, so creating a Horde character is something of a betrayal. In my defence, there’s only so many world quests a gnome Warlock can do each day after hitting the 120 level cap before things start to get repetitive.

It certainly doesn’t help that the expansion is largely more of the same sort of gameplay introduced in the Legion expansion two years ago. Variety is the spice of life, you know.

And you know what goes good with spice? One hundred per cent grade A beef. 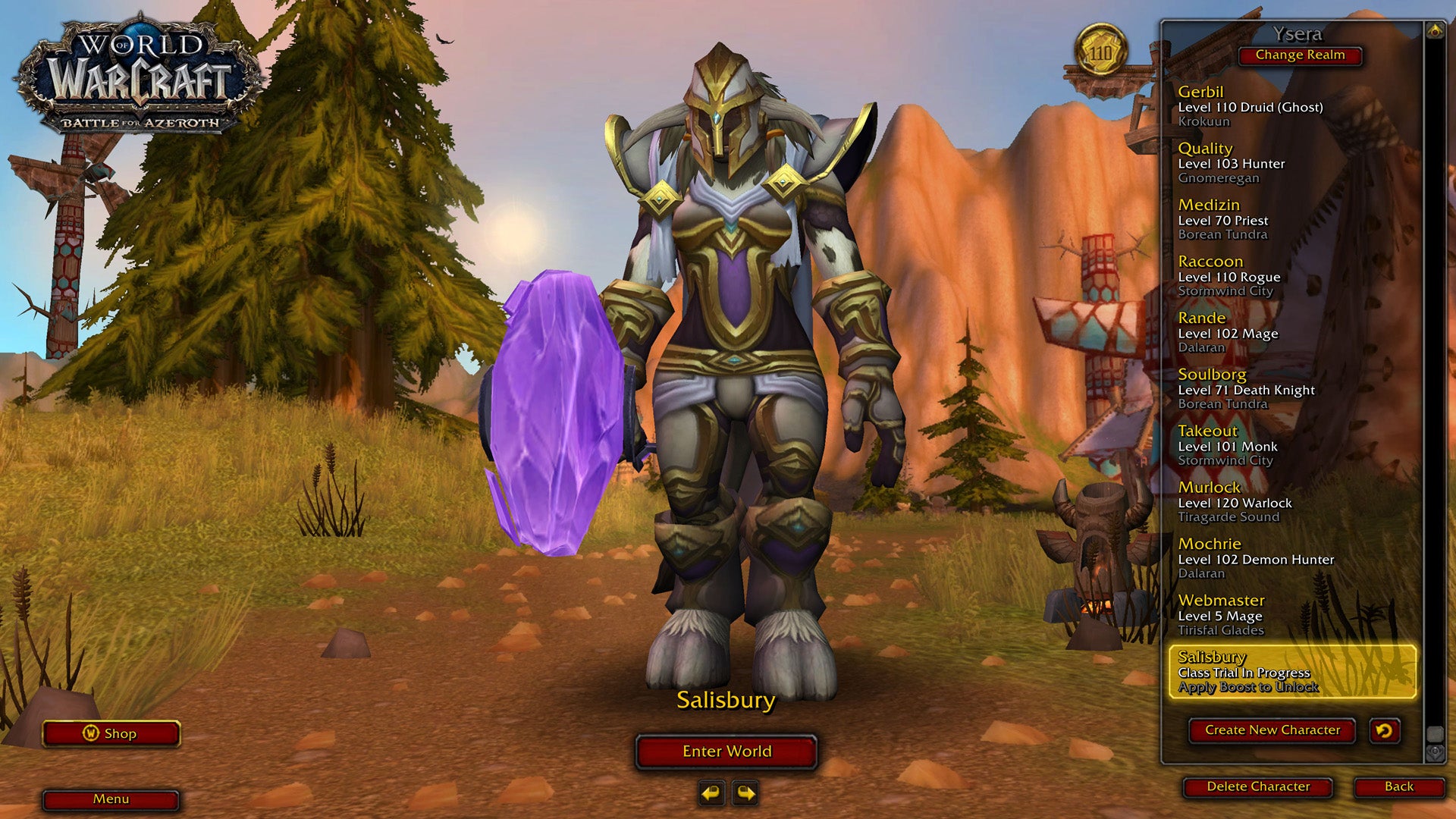 So much at steak here.

Utilising the level 110 character boost that came with the Battle for Azeroth expansion, I created a Horde character who appealed to my Alliance sensibilities. I chose a Tauren, as the bull-like race always seemed less hostile than some of the other Horde races.

For class, I went with Paladin, a holy warrior that was exclusive to the Alliance until 2007’s Burning Crusade expansion. I named her Salisbury, because I was hungry. 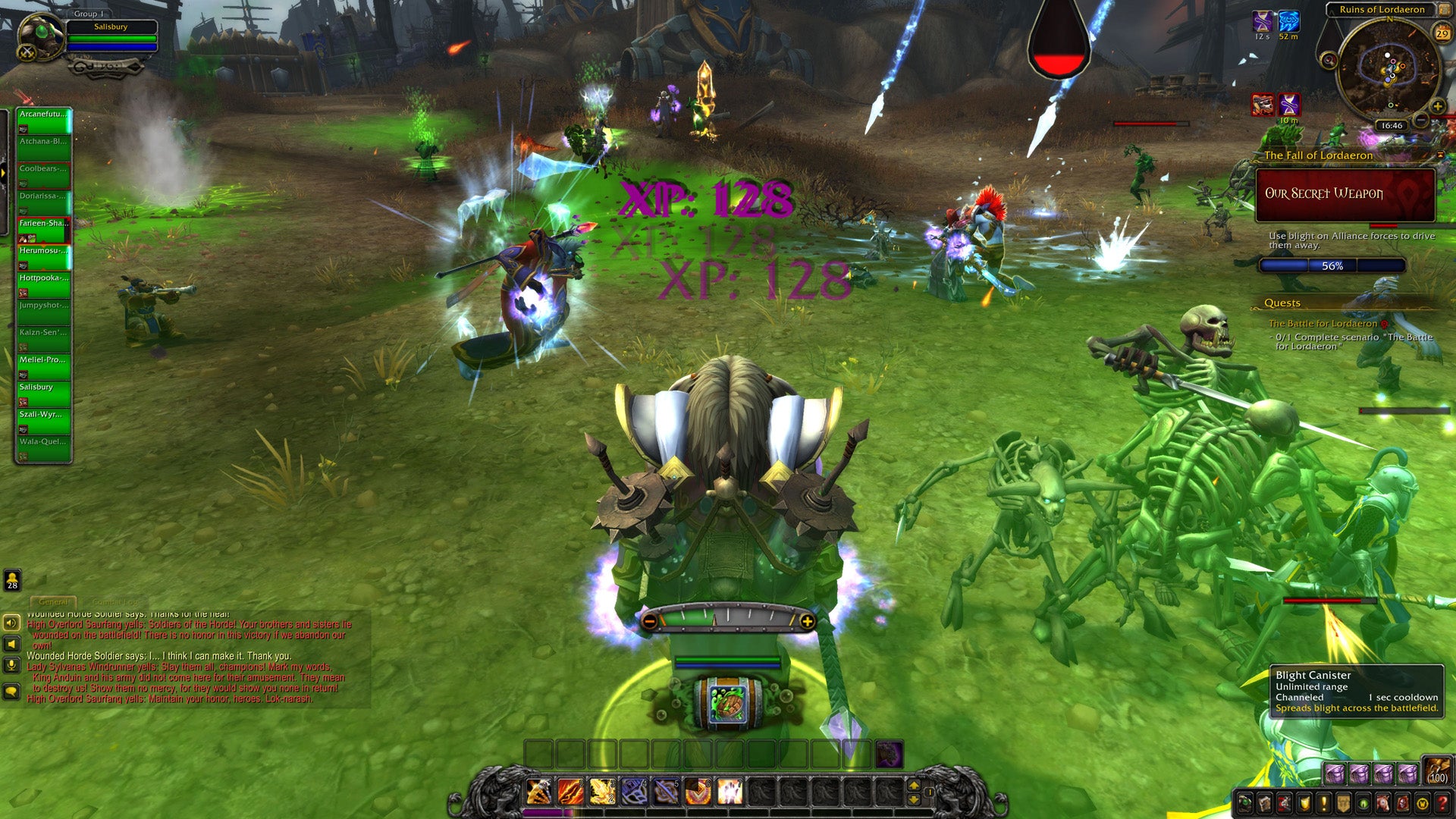 During the Battle for Lordaeron event, Horde characters get to choose whether or not to murder the Alliance using chemical weapons. I went with murder.

My original plan was to poke fun at the Horde by having Salisbury the Paladin dead in every screenshot in this post, sort of a running gag. But I ran into a couple of problems. First off, Paladins don’t die, apparently. I tried pulling all of the things without a care in the world, but the things kept dying in droves.

Secondly, I was having too much fun to let death get in the way. The Horde side of the story is so much more interesting. We get to experience the conflict between the bloodthirsty Banshee Queen (killer of the night elves’ World Tree) and the honourable Lord Saurfang, whose demeanour had players taking off their armour pre-expansion. 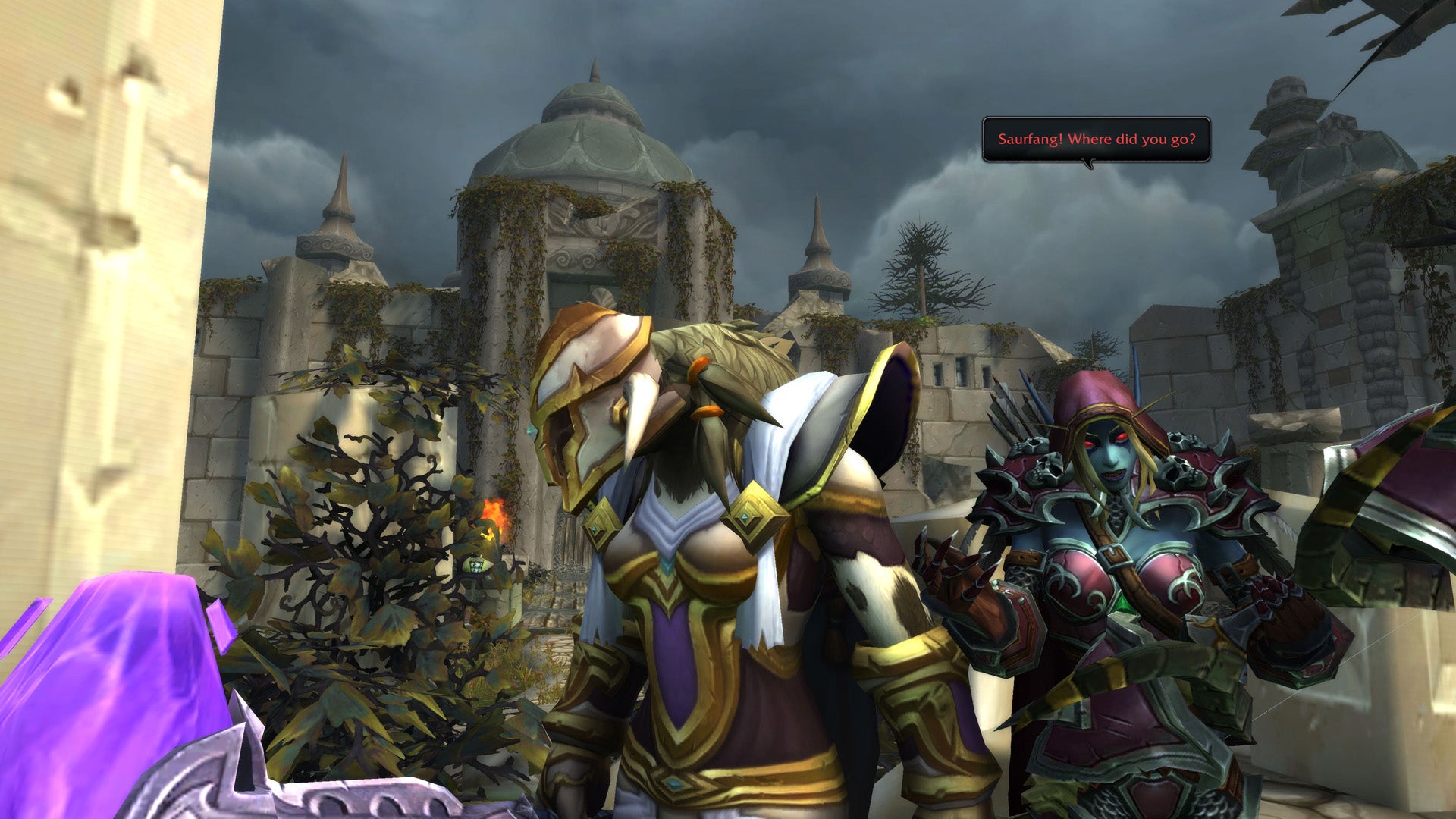 “Saurfang! Where are you? I need to make more arsehole comments about your son dying in Wrath of the Lich King!”

After the Battle for Lordaeron, before venturing to the new island nation of Zandalar, Horde characters get to go on a daring rescue mission in the Alliance capital of Stormwind. We invade Stormwind. On eagles. It’s outstanding. 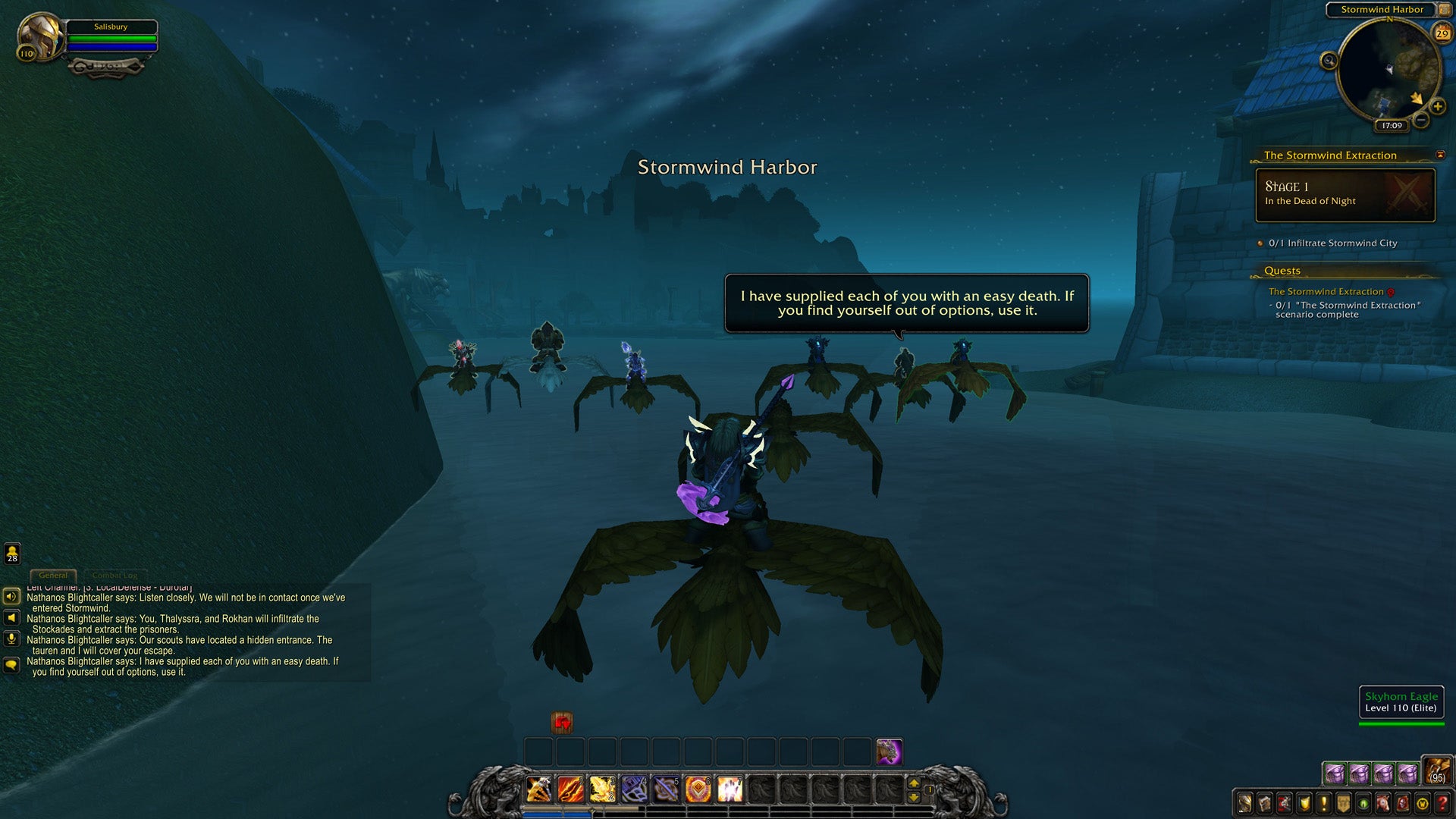 Someone remember to drop that ring in the lava on the way out.

We rescue a pair of Zandalari trolls, one of which is a princess with some powerful mojo. On the way to the docks to escape, following a tense stealth sequence, the Horde team is cornered by Jaina Proudmore, the legendarily powerful Alliance Mage. Without batting an eye, one of the rescued trolls tells her she can either capture the party or use her Ice Mage powers to put out Stormwind which — by the way — is on fire. 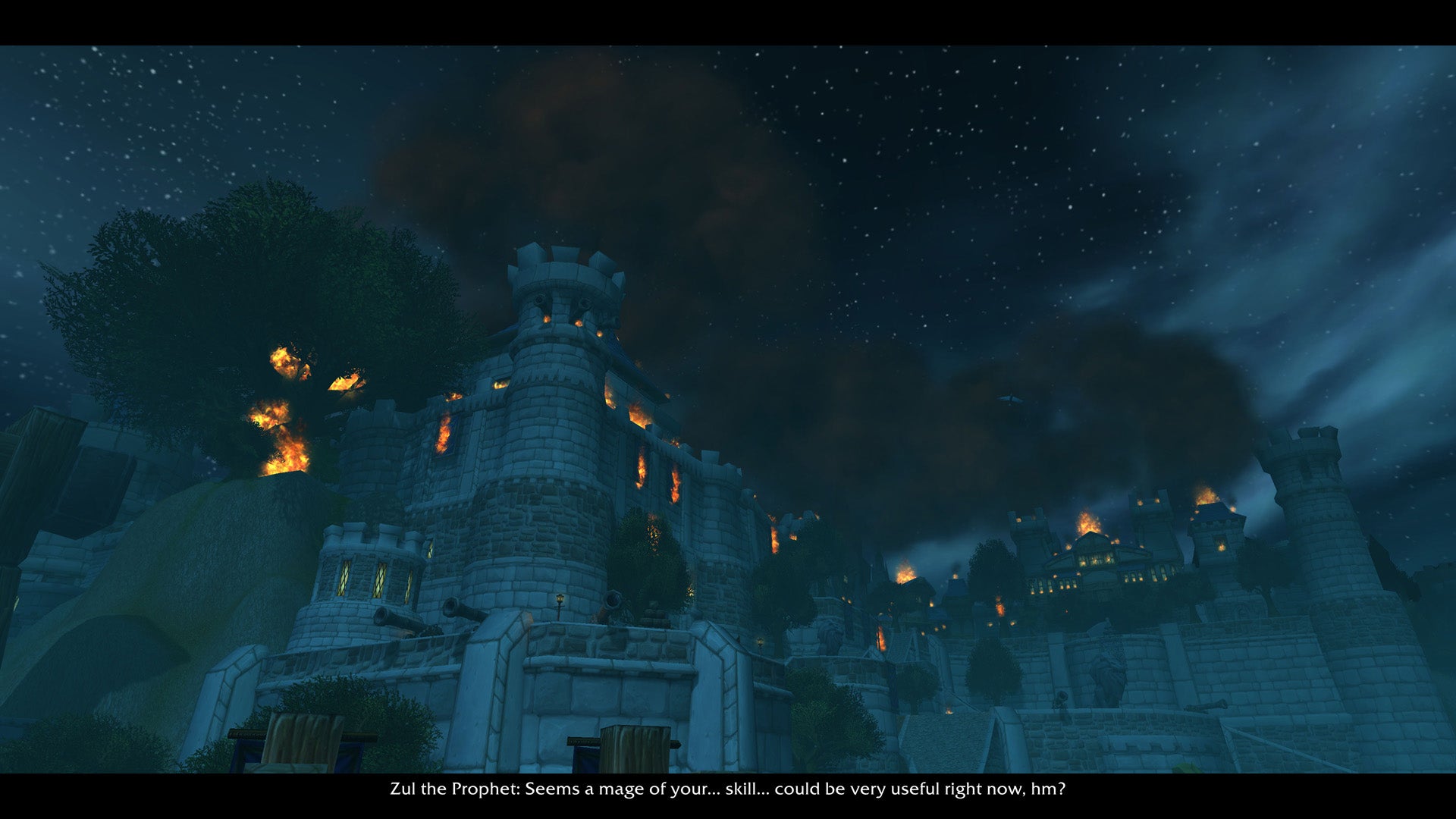 Maybe put out your city and let us go, kay? Thanks.

As if that weren’t bad-arse enough, here’s what happens when the Alliance fleet catches up with the Horde ship en route to Zandalar. No, I won’t describe it. Watch the video. It’s worth it.

Once the smoke clears, Horde characters arrive in Zuldazar, a gorgeous, Aztec-inspired city on the Southern tip of Zandalar. It’s breathtaking, and a far cry from the dingy port town the Alliance starts off in. 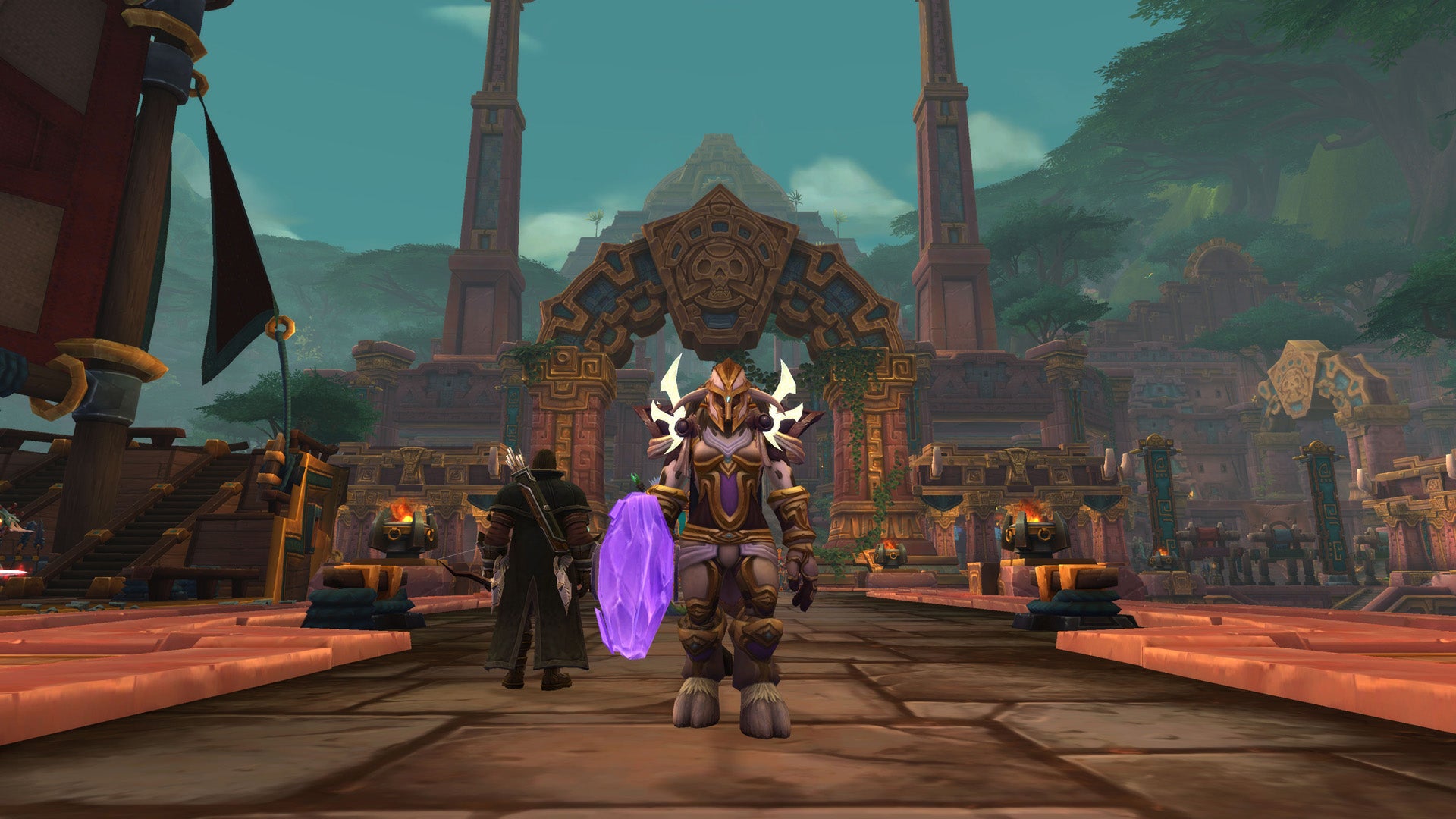 Blizzard’s really taken the trolls’ South american flavour to a new level in the expansion.

The city, more of a temple really, is bright and colourful and teeming with life. Not just troll life, either. The place is lousy with chromatic dinosaurs. One can readily see the strategic value of making friends with these folks. 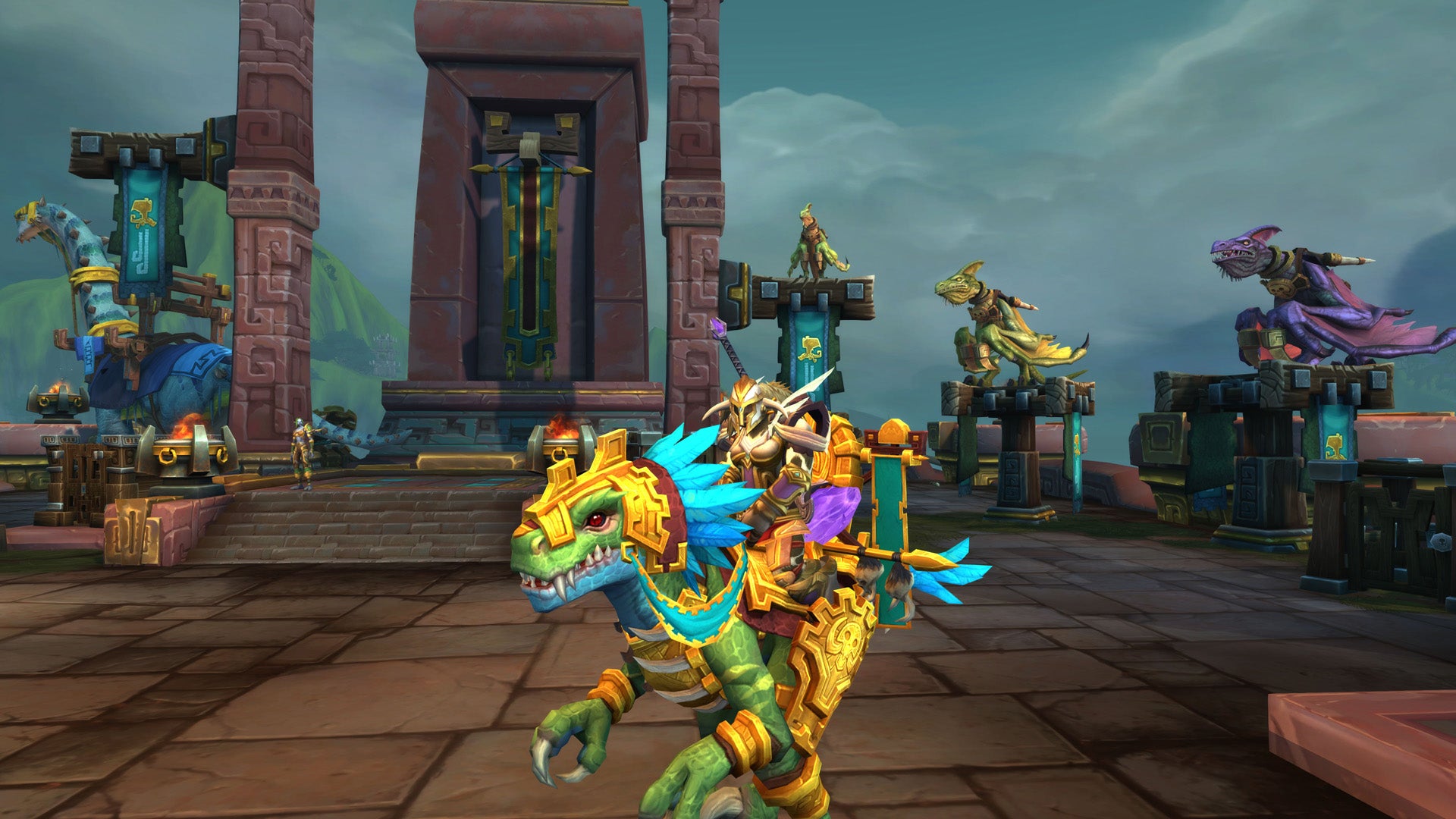 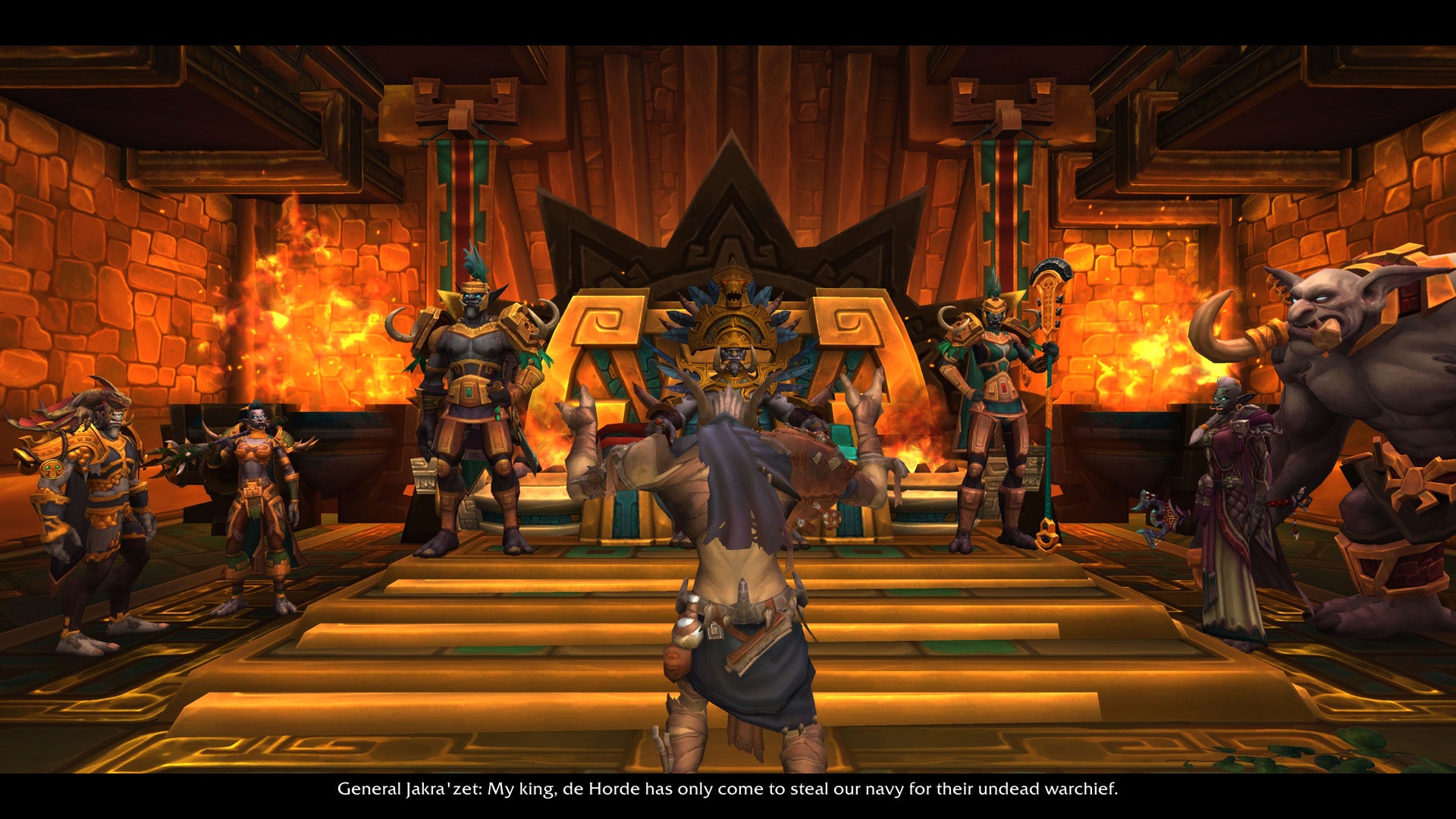 There’s not much of a difference to the Horde side questing and levelling structure, however. Hordies still pick from three different areas of their island, following the story and performing side quests to gain experience and level up their artifact armour. 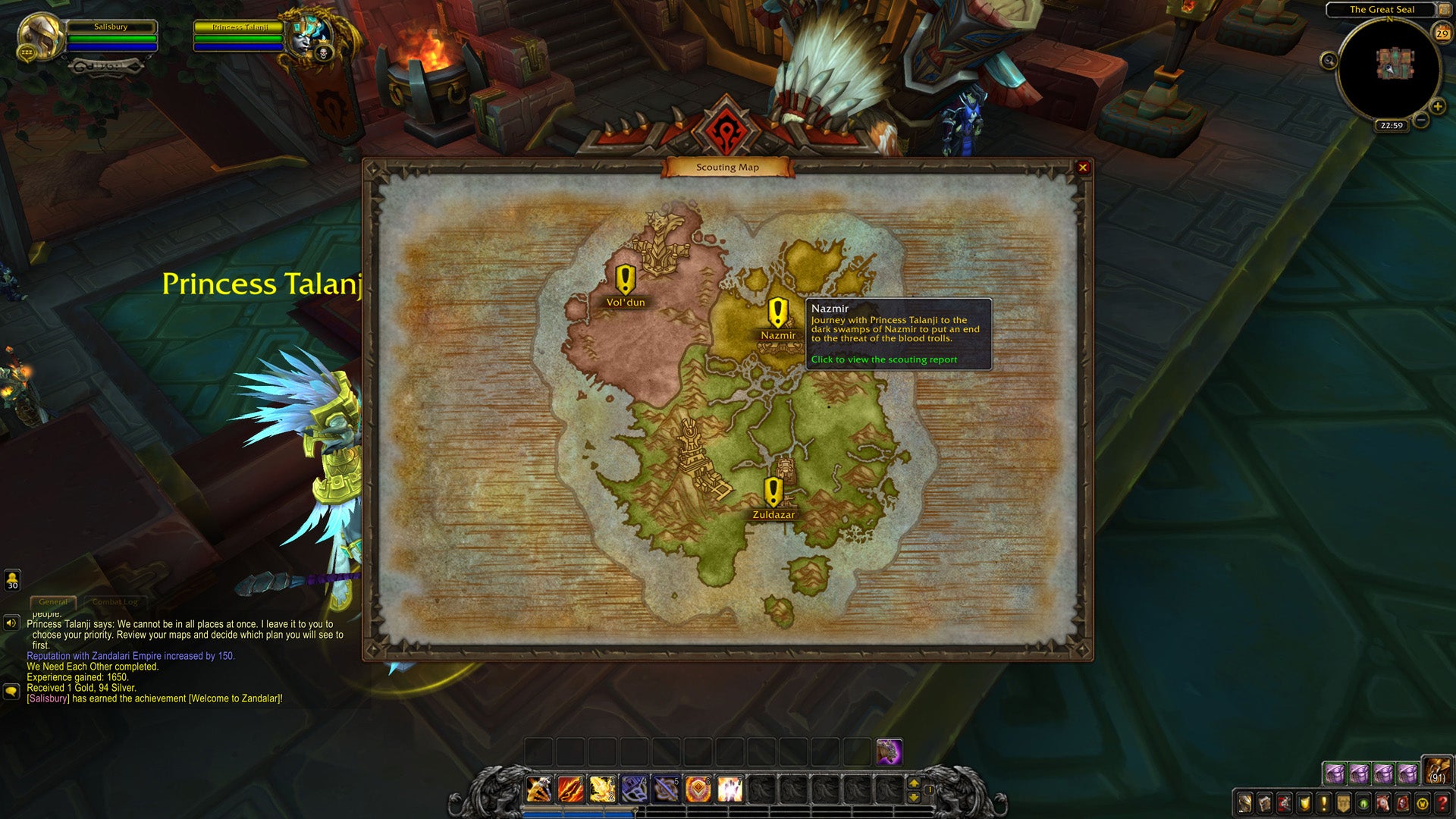 It’s just they get to do it in a lush swamp, rather than in the rolling hills and forests of the Alliance’s island. It’s so lush. I love it. 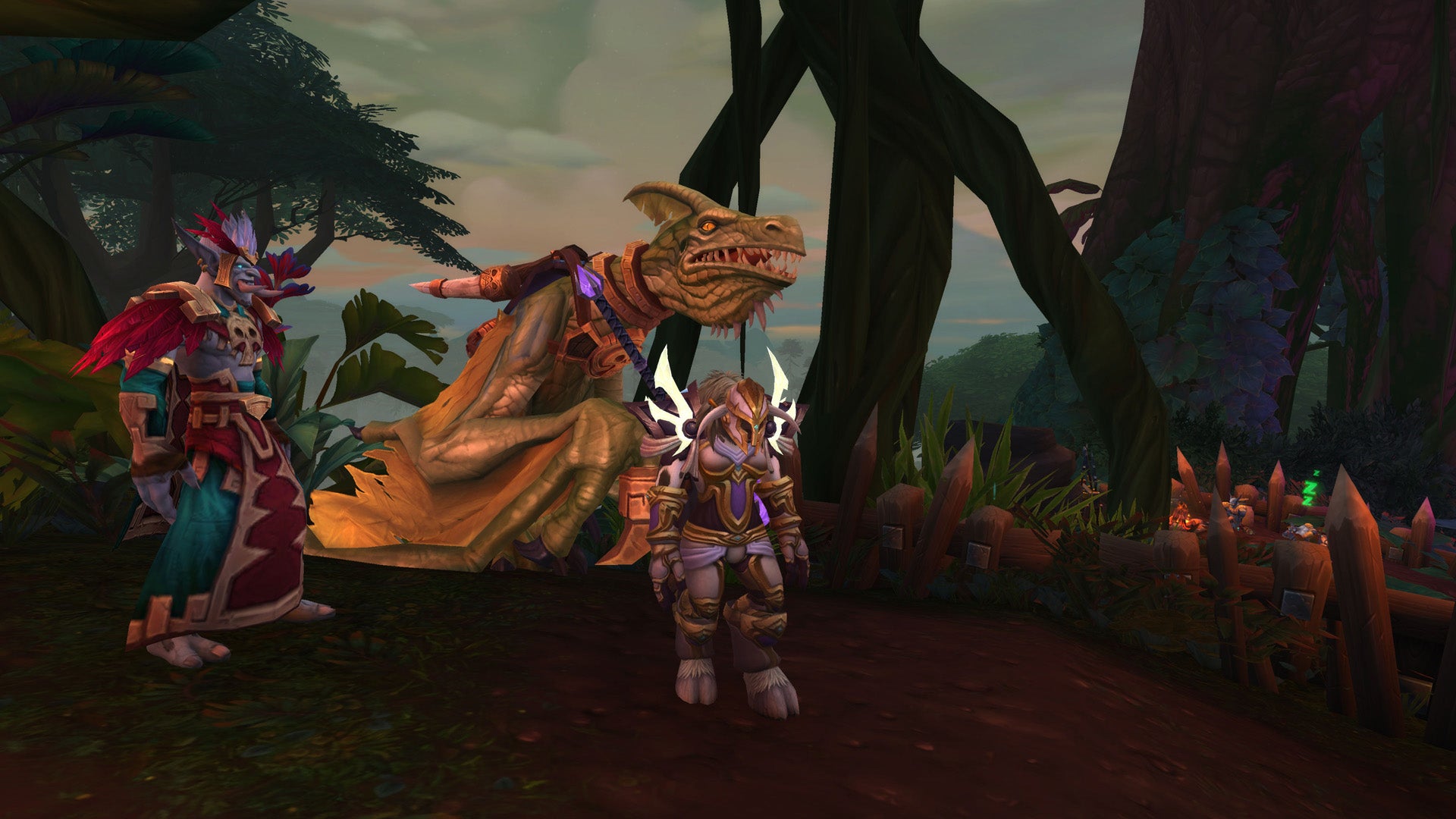 I seriously have three dozen screenshots of this area.

Now this doesn’t mean I am completely abandoning the Alliance. It merely means that I won’t be playing the Alliance side any more, at least until Salisbury the Paladin hits level 120. And probably not after that, either. Look, it’s not my fault Blizzard likes the Horde better. 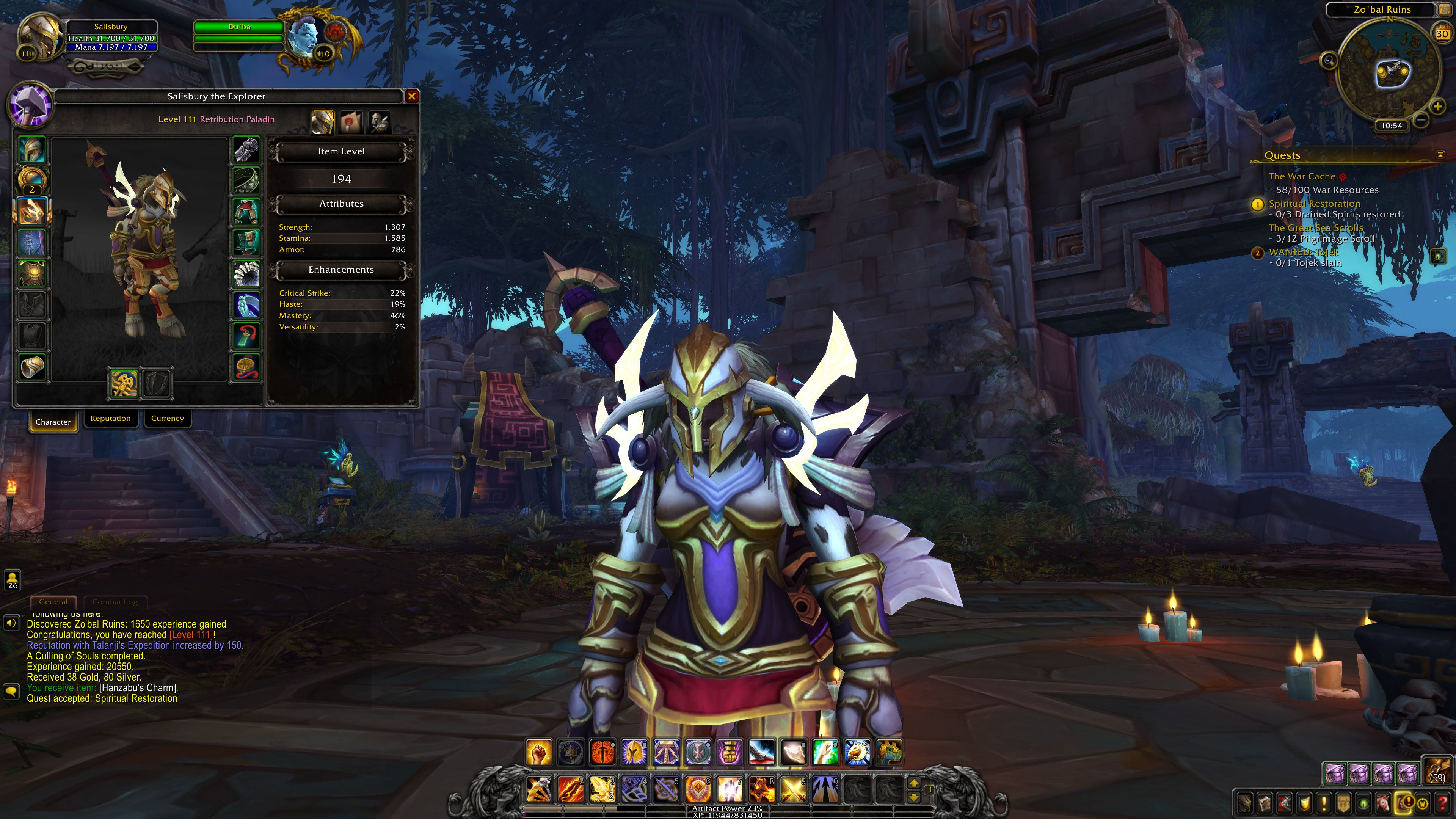