There was once a time when we all feared that hyper-intuitive artificial intelligence and robots might one day pose a threat to humanity, but to look at our current technological landscape, it’s seeming much more likely that our collective obsession with our phones and the growing gig economy might be what does us in.

The heroes in this week’s best new comics come from dystopian technological worlds that will feel familiar to you, but also challenge you to understand that there are still ways to tell fresh, fascinating stories in those settings. 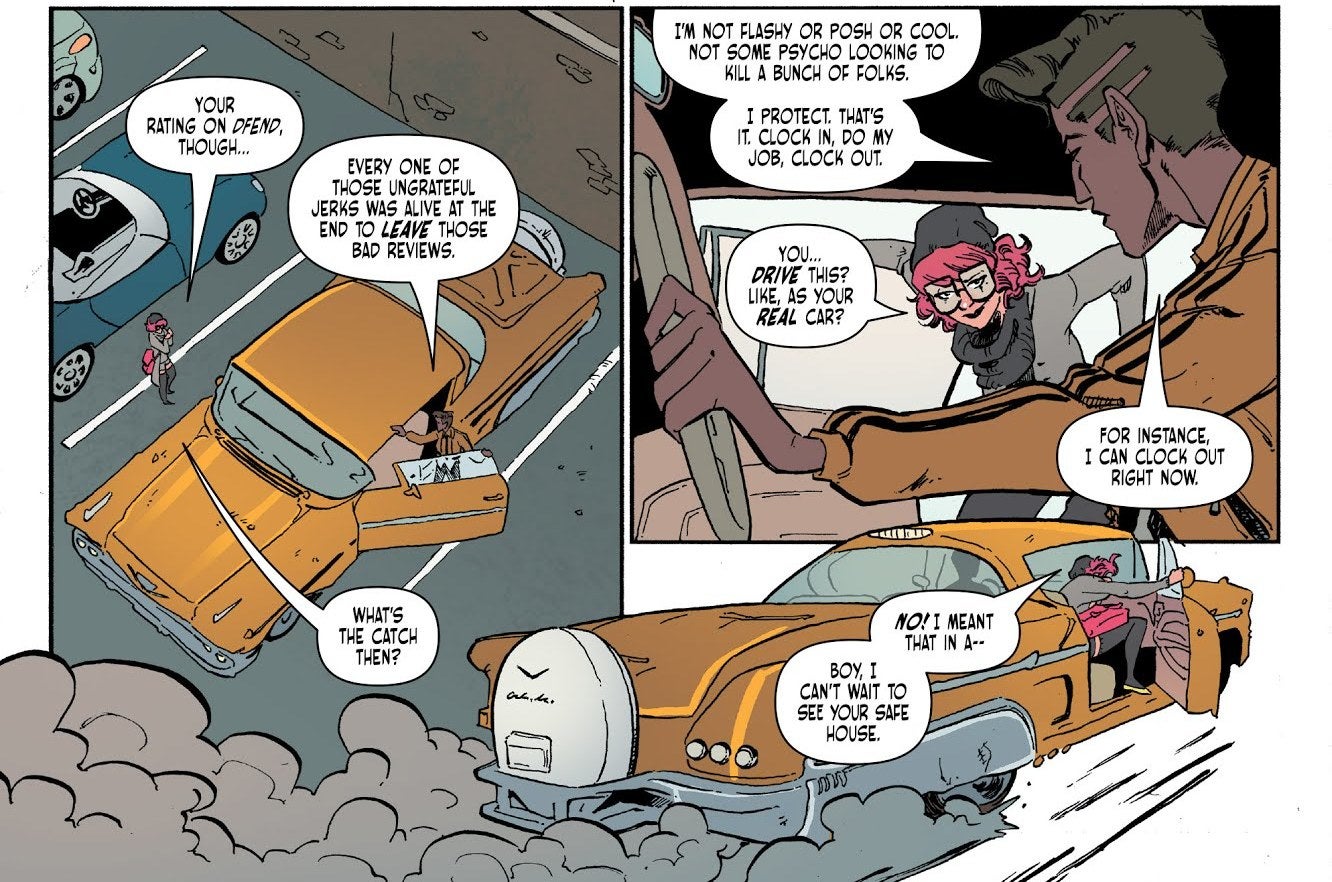 There was a time when one could reasonably assume that they’d find a job, stick with it for a few years, and if things worked out, there was potential to rise up through the ranks and establish a lasting career. For a great deal of us, that time is over. Now, multiple career changes are common and it’s not at all out of the ordinary for people to hustle on the side to make ends meet.

The competitive gig economy dominates the world of Image Comics’ Crowded — from writer Christopher Sebela and artists Ro Stein, Ted Brandt, and Triona Farrell — a place where there’s an app for pretty much any service you could possibly need. Dog walking? Sure. Dress renting? Of course. Bodyguarding? Most definitely.

The company Dfend’s anti-assassination protection services are of the utmost importance in Crowded thanks to Reapr, a Kickstarter-like crowdfunding campaign service that places bounties on people. Knowing that all manner of folks will be clamouring to murder her during a 30-day campaign for her death, Charlie Eddison hires Vita, a Dfend bodyguard with an impeccable record and a curiously low rating from her past customers.

From Vita’s perspective, her clients’ ability to even leave ratings is proof enough that she’s the person for the job and for Charlie, Vita’s pretty much her only chance at surviving the deadly month ahead of her.

Stein, Brandt, and Farrell create a world that feels like a grounded, though still imaginative, glimpse into the near future where styles are more or less the same as the present, but society and cultural norms are markedly different. Charlie doesn’t exactly know why the campaign against her was launched and each of Crowded‘s panels conveys the idea that the people gunning for her don’t know either, nor do they really care.

For them, she’s just another piece of clickable content with the promise of a reward at the other end of it which, honestly, is the most terrifying thing of all. (Christopher Sebela, Ro Stein, Ted Brandt, Triona Farrell, Image Comics) 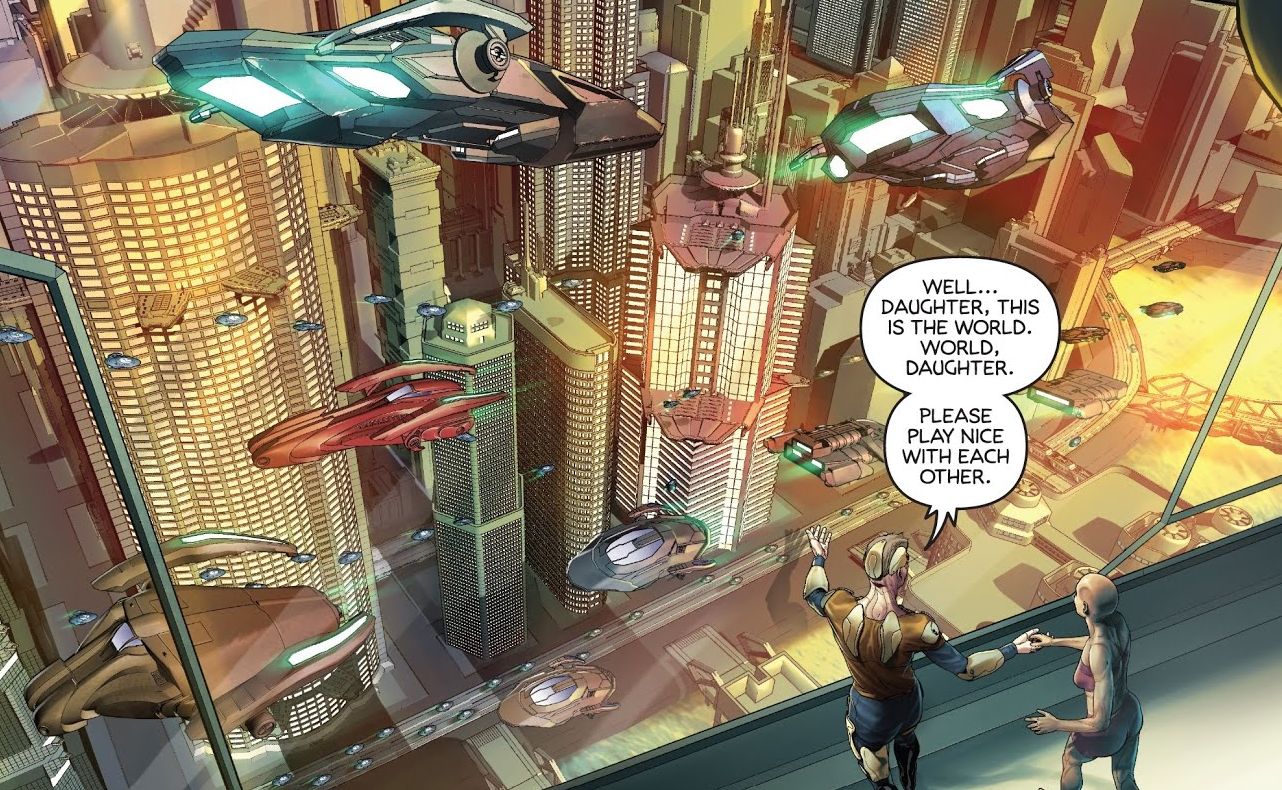 The newly-born Amber-4T taking in the world for the first time. (Image: Omar Francia, Aftershock Comics)

By now we’re all familiar with stories about advanced robots gaining sentience, realising that humans are a plague upon the world, and deciding to wipe us all out in order to take their rightful places at the top of the food chain. Aftershock Comics’ Volition from writer Ryan Parrott and illustrator Omar Francia sidesteps that premise and instead envisions a future where the birth of robotic intelligence doesn’t result in a unified hive mind.

Rather, the “Artificials,” much like humans, possess individuality which makes them that much easier to eventually subjugate.

After their enslavement was made illegal, artificials live as second class citizens in a world where older generations of their kind quickly become outdated and forced into lives of crime in order to secure illegal parts that can keep them alive. As perilous as the Artificials’ continued fight for their civil rights is, the destructive communicable disease known as “Rust” that addles their minds before burning them out ravages their community.

It’s thought that the key to discovering a cure for rust lies in the mind of Dr. Elizabeth Traymor, the woman who first developed the technology that led to the Artificials’ creation before mysteriously disappearing from the public eye.

Volition uses its Artificials to depict a kind of disenfranchised other that feels distinctly human in contrast to the comic’s overall futuristic setting. Though they may not share humans’ vulnerabilities, the Artificials are similar to their creators in that they aren’t immortal and have the desire to create offspring to carry continue their lineage.

Francia’s illustrations are lush and cinematic and the way he renders the Artificials, in particular, evokes, interestingly, the aesthetics of some of the more modern Transformers comics and movies. (Ryan Parrott, Omar Francia, Aftershock Comics)