god of warkotaku coresanta monica
To sign up for our daily newsletter covering the latest news, features and reviews, head HERE. For a running feed of all our stories, follow us on Twitter HERE. Or you can bookmark the Kotaku Australia homepage to visit whenever you need a news fix.

God of War’s New Game Plus mode doesn’t offer any radical spins on the game’s formula, but does reveal how much fun the game is when you’re given all the tools it offers you for all your beheadings and beatdowns.

Kratos fans who want reasons to keep playing the new God of War have been asking for New Game Plus since the game launched, and Sony was able to give them one this week.

In this mode you start the game over, but with all the new moves, upgrades, armour, weapons and currency you collected during your previous runthrough. You can even get even more health upgrades if you solve rune chests and grab more Apples of Idunn. I ended my last playthrough with two Apples in my inventory, and when I found a third I was granted more health, which was a fun surprise.

It also adds also more powerful versions of older armour sets to craft. My personal goal for this go-around is to get the resources to make the full set of the Armour of the Ancients+, which looks cool and gives you a resistance to elemental attacks.

There’s also a new armour set: The gag item called the “Cod of War”, which is a reference to a joke from God of War 2 and is also pretty gnarly. 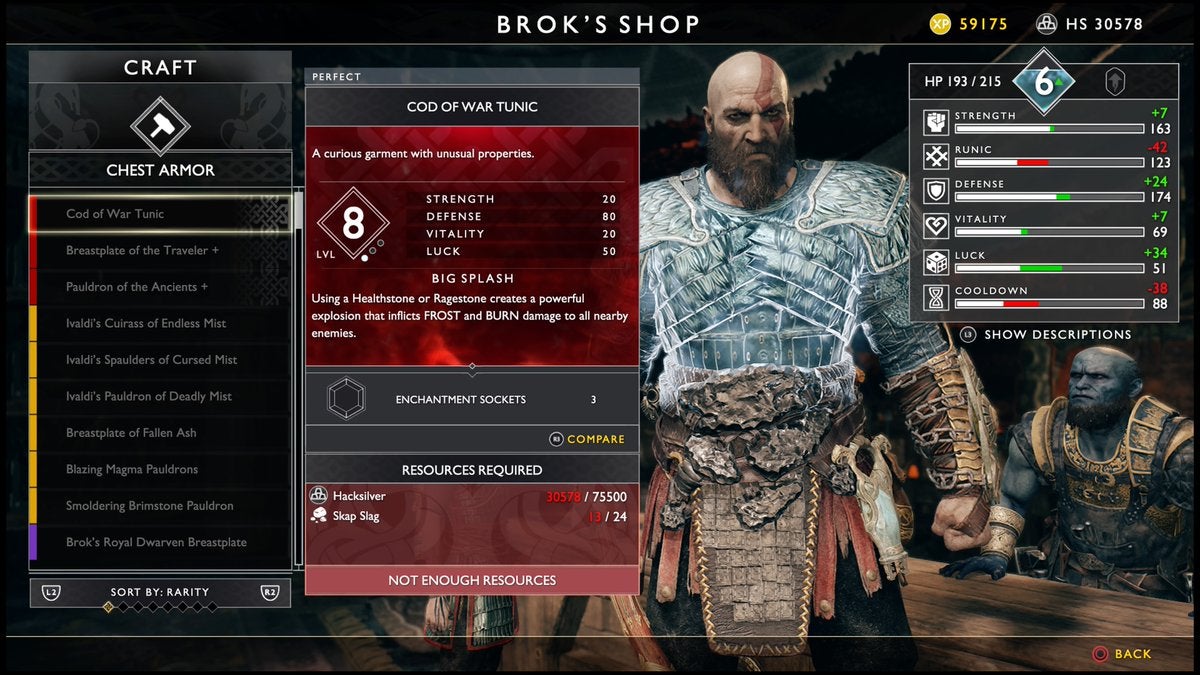 Other than that, the game is more of the same, which is to say that it’s very good. What’s especially striking is how much more fun the early moments of the game are with all the upgrades.

In particular, the Blades of Chaos are now available from the start, which makes dispatching some of the earlier enemies trivial. Until I got overeager and ate shit a couple of times trying to beat the dark elf boss in Alfheim, I considered bumping the difficulty up, which is not something I usually do in video games.

I wasn’t expecting having everything unlocked to make that much of a difference. When you start a New Game Plus, the game will also bring the enemies’ levels up closer to yours, which means there’s still some challenge.

In my original playthrough, some encounters were tense puzzles where I was trying to wrap my head around how to attack and defend myself while making use of Atreus’s arrows. In New Game Plus, they’re less tense but still puzzle-y, only this time the puzzle isn’t “how do I survive?” but instead “how do I use all these fabulous toys?”

In some ways, this feels like how the game should be played. It’s a riot of ultraviolence when you have all these systems under your control, making even areas and enemies I initially hated an absolute joy.

Although Kotaku video producer Tim Rogers would disagree with me on this, I always hated dark elves when I originally played the game. Tim would scream in joy when he saw them approach; I would sigh in dismay. Getting through Alfheim originally was a chore, as I always seemed to get blinded at an inopportune moment and then get the shit kicked out of me.

Not so when I have the Blades of Chaos on hand. Now I can juggle those elves like a pro, taking new risks I wouldn’t have made if I’d only had my axe.

After spending a few days with God of War’s New Game Plus, I am absolutely sure I am going to play the game all over again.

I know why video games slowly reveal new mechanics to you over a period of time. If I started God of War with the arsenal I currently have at my disposal, I would be overwhelmed.

Getting the chance, now, to throw my axe at a giant’s head and then mess it the heck up with my fiery blades is an opportunity I don’t want to miss out on.