Guacamelee 2 feels great to play. It’s a demanding platformer with elements drawn from the beat ‘em ups of old but executed with such precision they feel modern. The way throwing a punch can be intertwined with hoping over a pit of lava transforms every obstacle into a puzzle.

Despite surface similarities and homages to dozens of video game classics, Guacamelee 2 feels unique and unrivalled, even if the whole doesn’t surpass the sum of each amazing part.

Guacamelee 2 takes place seven years after the first game. Humble agave farmer turned heroic luchador Juan Aguacate is enjoying a quiet life with his family when a crisis threatening the “Mexiverse” pulls him out of retirement. The broad outlines of a convoluted and occasionally funny plot extend beyond that, but all you really need to know is that Salvador, a fellow luchador in an alternate timeline, is breaking reality and you need to stop him.

It’s chock full of cultural gaming references and memes, which are hit or miss on their own but admirable when considered in their entirety. One section of the game, called the dank cave, is littered with groan-inducing billboards of Grumpy Cat and dedicated to characters airing their grievances with the first game.

Otherwise, the game functions almost exactly like the first, with a few tweaks and general improvements. Juan spends the opening hours collecting all of his special moves from the first game, each of which has a specific colour corresponding to a particular obstacle or enemy shield.

They’re also central to the game’s particular mix of platforming. An uppercut will help Juan jump a little higher, while a dash punch can get him just far enough to reach an otherwise unreachable ledge.

When combined with other abilities, such as double jumps and wall grappling, the results are elegant and devastating attack combos that also double as means of traversal.

It’s easy to tease out which set of button presses will be needed to get through a particular set of obstacles and then execute them flawlessly. As unforgiving as the game’s platforming can be, it never feels unfair.

The power of the pollo takes on a much great significance in Guacamelee 2 with an entire series sidequests and ultra hard challenges based around your new chicken abilities. (Screenshot: Kotaku, Guacamelee 2)

Rather than build out his arsenal further, Guacamelee 2 places a greater emphasis on the Juan’s chicken form. When transformed, Juan can pull off the Pollo Shot and Pollo Slide to break through purple and orange blocks and shields respectively.

The slide is basically a lateral dash attack, but the Pollo Shot sends Juan flying at a 45 degree angle. Early in the game it’s a nice extra boost needed to reach an objective, but later on it’s required for carefully navigating snaking tunnels of spike-lined walls or dodging over an enemy’s head.

The chicken can also glide and occasionally find power ups to go into superbird mode and become invincible, which is a welcome reward after finishing particularly long and punishing stretches of the map.

Overall the chicken form, previously only used to traverse cramped tunnels similar to Samus’ Morph Ball manoeuvre, is more versatile in Guacamelee 2, but the real beauty is in how Drinkbox has designed levels and fights to take advantage of these new abilities.

I often found myself needing to transform into chicken form mid-jump or between smashing two skeletons in the face and then back again to make use of another particular attack only Juan could launch.

It’s a key distinction for a sequel that most people would have trouble distinguishing from its predecessor at first glance. 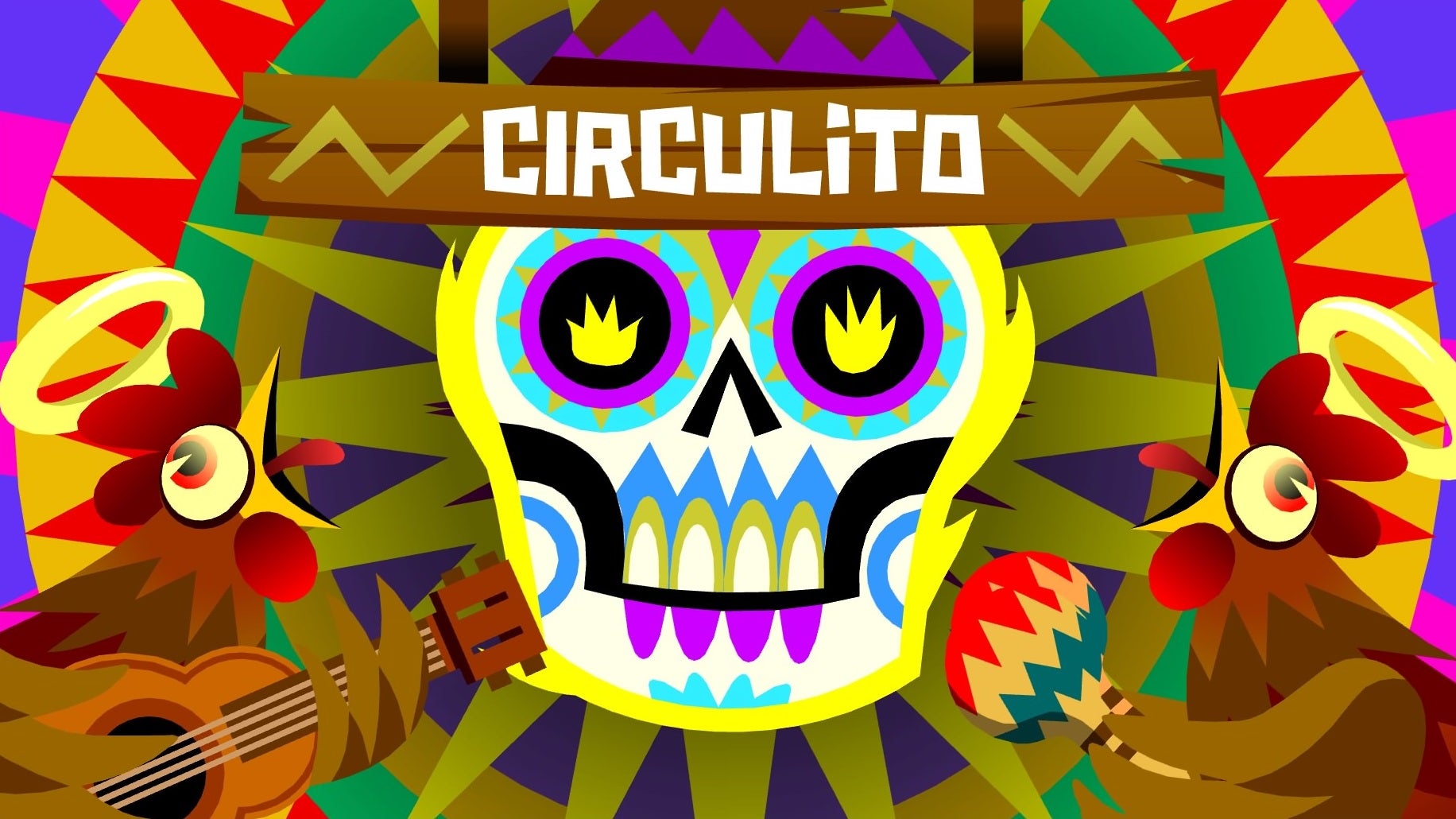 “Video game poultry finally gets its due”

Mariachi-infused soundtrack with chiptune flourishes, exquisite controls, and the relief I felt every time I didn’t die.

Mostly throw-away storyline, simplicity of the upgrade system, and repetitiveness of some of the fights.

9 hours for my first playthrough and a couple more hunting for leftover secrets and starting a new playthrough on hard.

The first game’s dimension shifting had also returned. Juan is able to move seamlessly between the worlds of the living and dead with a single button press.

Doing so changes the look and geometry of a level: A wall or platform might exist in one world but not the other, requiring Juan to switch back and forth while in mid-air or mid-attack. Sometimes two dimensions coexist along bands that move across the screen.

Instead of just controlling which of two static environments are showing I found myself having to contend with the game’s timing while also getting my combos right and switching back and forth between chicken form as needed.

All of these moves together often make Guacamelee 2 feel more like trying to untangle a brain teaser than a traditional platformer.

Seeing how the solution to a problem plays out visually as you traverse across the game’s gorgeous levels is its own reward that pushes away any feelings of exhaustion of frustration. The art style and detailed environments wooed me, while the mechanics required to traverse them felt almost overwhelmingly cerebral.

The game includes local four-player coop integrated seamlessly throughout the whole game. It’s fun in theory but often chaotic and extremely difficult in practice. Fights scale to account for the extra players, but the platforming remains unchanged. (Screenshot: Kotaku, Guacamelee 2)

In isolation each aspect of Guacamelee 2 is satisfying, but the fusion of all its moving parts remains incomplete. Even more so than the first game, Guacamelee 2’s levels can feel boxy or restrictive. Everything is purposefully arranged just so; there’s very little room for improvisation outside of its brawls.

They’re still an interesting and sophisticated take on the traditional side-scrolling beat em up, but they can feel less polished than the platforming. One more than one occasion I struggled to finish off enemies in a particular room only to breezily stroll through after a series of different choices by the AI left a mob more vulnerable and easy to deal with.

Guacamelee 2 has a combo meter that fills up as you successfully land hits. Being able to juggle enemies in the air before chucking them at others is still fun, but it often also feels a bit extra. Boss fights have been toned down in difficulty, for better or worse. Outside of a few fights that had me cursing at my TV, the enemy encounters often felt repetitive.

Drinkbox has added a small skill tree this time, where new upgrades to abilities and status buffs such as gaining more gold from defeated enemies are unlocked by completing certain challenges and spending gold, but it fills out very quickly and felt more like a formality than anything else.

It’s these aspects of the game that, while not bad per se, seem like leftovers from Guacamelee 2’s inspirations rather than something new.

Guacamelee 2 also include Eagle Boosts, little golden statues hanging in the air whose power you can channel to catapult yourself in any direction once you get within range. (Screenshot: Kotaku, Guacamelee 2)

Metroidvania worlds have side quests and people to talk to, so Guacamelee 2 has those as well. In one particular house near the end of the game I ran into a daughter whose father had passed away. In the world of the dead I could talk to him and tell him about his daughter, and in the world of the living I could convince her that he was still present in some way and thinking of her.

It was a simple, beautiful interaction, but the treasure chest sitting behind the daughter that having these conversations unlocked felt like a crass way of trying to shoehorn it into the rest of what Guacamelee 2 is about.

As a winding network of caverns and passages where every opening cries out for you to attempt a courageous wrestling stunt to see where it leads, Guacamelee 2 feels exhilarating, like spelunking with a pogo stick. In this way it surpasses many of the classics it pays tribute to and demonstrates why it’s an altogether different animal. It’s also a worthy successor to the first game, bigger in almost every way but without an inch of space wasted.

But as it’s grown in size and ambition, so too has the gulf between the herculean feats of strength Juan is asked to perform and the incomplete feeling of the universe he’s doing so to save.