Last week, I documented the constant low-level anxiety I had been feeling about cooling the CPU in my gaming PC. I'd spent a couple of years wrestling with all-in-one liquid coolers and had never found something that worked like I wanted. Well, good news: I've finally found something that does.

Last Thursday I replaced my Corsair H100i V2 liquid cooler with a big honkin' Noctua NH-D15 air cooler. The difference has been immediately noticeable, both inside and outside of my PC. On the outside, my PC is a tad quieter than it was, not that it had been all that loud.

It also looks weirder, with a huge metal contraption filling half of the glass side-panel. It's the inside stuff that really matters, however. With the Noctua installed, my CPU, an Intel i7 7700k, is running cooler by about 15-20°C. It's a huge improvement. 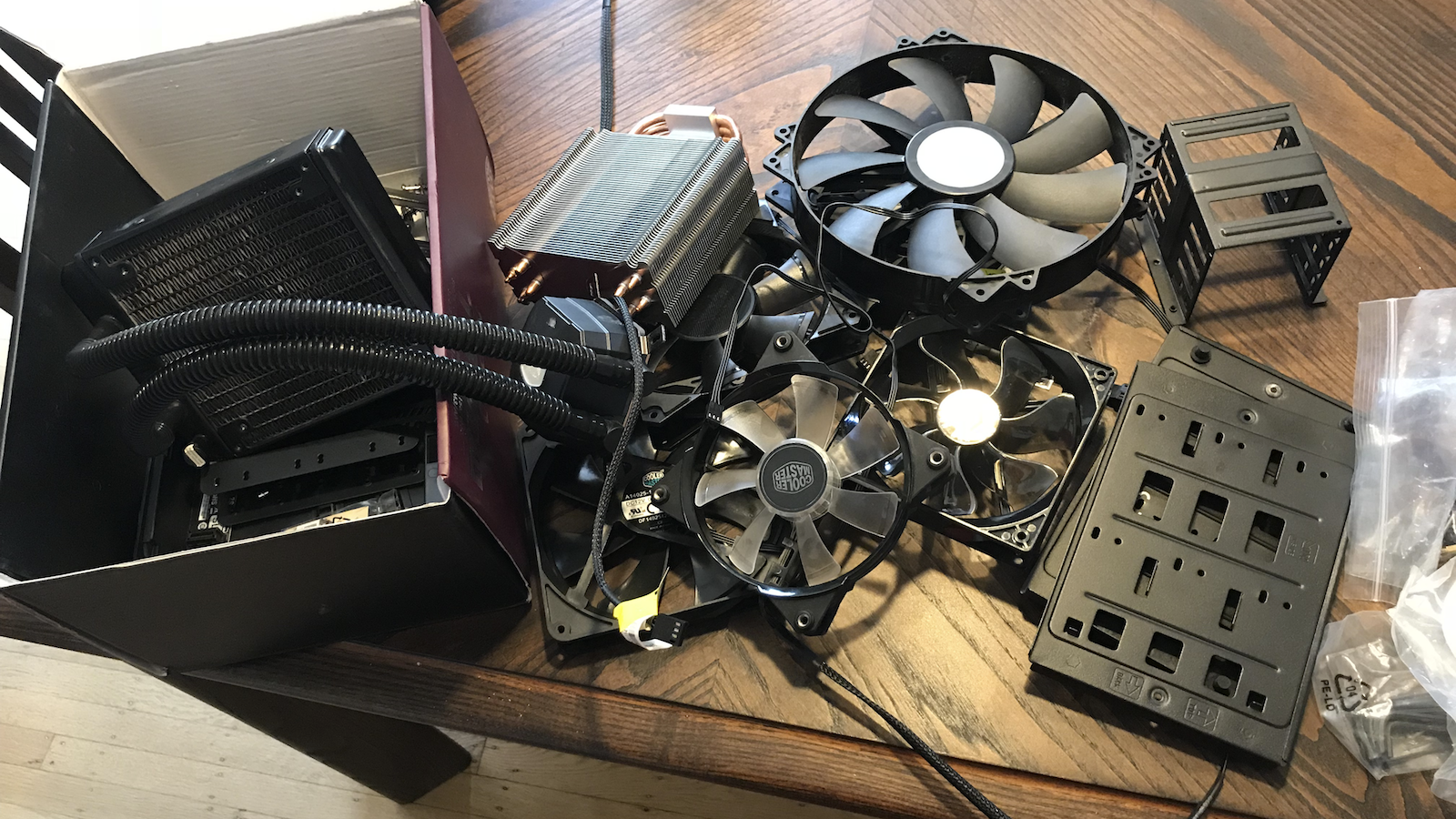 My Obsession With CPU Cooling Is Becoming A Problem

Everyone chases some kind of low-key but elusive white whale, a casual desire or goal that remains forever out of reach. For some, it's finding the best possible cup of coffee, or the perfect pair of jeans. For me, it's getting my PC CPU to run below 70 degrees Celsius while under load.

CPU cooling is one of the great bugbears of PC gaming and a constant obsession for the tinkerers and customisers among us. (I love it, of course, like I love PC building in general.) Your CPU generates a lot of heat as it operates, particularly when doing intense operations like those required by most big video games.

It's essential to keep the processor cool, especially if you overclock your chip to run at a higher-than-stock frequency, since doing so generally requires increasing the chip's voltage as well. Increased voltage means increased temperatures, which require increasingly elaborate cooling.

If you install a stock CPU and don't plan to do any overclocking, you can probably just install the stock fan and heatsink that come with it. Most PC builders opt to use more elaborate cooling, though. Broadly speaking, there are two options: liquid or air-cooling. Air cooling is relatively straightforward: put a metal heatsink on the CPU to pull heat, then blow a fan on the heatsink to cool it off.

The stock cooler that comes with most CPUs is an air cooler, though most custom air-coolers are a lot bigger and more intense.

Liquid cooling adds a step to that. There's still a metal heat conductor that pulls heat off the CPU, but it has a pair of hoses running heat-conducting liquid over it. The liquid cycles over the CPU, absorbs the heat and gets pumped back through to a metal radiator, which, like the heatsink on an air cooler, disperses the heat from the liquid into the metal, which is cooled by fans.

Hardcore folks build their own custom liquid cooling setups, but it's now fairly common to buy pre-made "all-in-one" (AIO) liquid coolers from companies like NZXT and Corsair, which are easy to set up and carry a lower risk of malfunctioning and leaking coolant into your expensive PC.

For years, I operated under the mistaken assumption that liquid cooling was superior to air cooling in some abstract way. I mean, obviously it was, right? It's more complicated! It involves liquid! How exotic! I was unfazed by my then-colleague Whitson Gordon's post over at Lifehacker about how he was quitting liquid cooling in favour of air cooling.

That wouldn't be me, no way. He had been struggling with a custom-built water cooling rig and I wasn't going to be that hardcore. I'd just get a prebuilt all-in-one. It would be fine.

I installed and used two AIO liquid coolers over the last four years; one that Cooler Master had sent me and a Corsair one that I later bought to replace it. I had read enough reviews and comparisons to have a faint sense that there wasn't a clear-cut performance difference between liquid and air, but I stuck with liquid all the same.

When I grew frustrated with how noisy the pump on my Cooler Master Nepton had become, I replaced it with a Corsair H100i V2. My CPU was cruising in the 70s while playing video games, which wasn't ideal but I decided was acceptable. I stopped rigorously stress-testing the CPU and decided not to think about it too much.

About a year passed and a Monster Hunter: World crash a couple weeks ago caused me to re-evaluate my cooling. Due mainly to something funky in the way that game pushed my CPU, my temperatures had been soaring into the 90s, which is way too high for a CPU to be running during a normal gaming session.

As I wrote about last week, I went on a tear experimenting with my air-flow, radiator placement and fan orientation, all in a futile effort to get my still-fairly-new Corsair AIO to work like I thought it should. Eventually I decided to just order a big air cooler and see how that went.

That's the brace upon which the Noctua heatsinks rest. This part of installation was much easier than I was expecting.

Last week the Noctua air-cooler arrived and I quickly installed it. Right off the bat I was impressed with how easy it was to attach it to my CPU, given the fact that it's roughly the size of a barn. The backplate and anchor points that affix around my motherboard are smartly engineered, which makes the heatsink far easier to attach than the notoriously finicky x-bar attachment on the Cooler Master Hyper 212 Evo heatsink, for example.

I've used Noctua fans in the past (they're great), but never one of their cooling products and I've been impressed with how much care they put into everything, from the packaging to the instructions to the included adaptors and cables.

I set up all my case fans, now with exhaust fans running out the top and top-back of the case, two big honkin' fans blowing across the CPU heatsink and two 120mm fans pulling air in through the front.

My current (final?) arrangement. At this point I mostly just like photoshopping coloured squares onto things.

My CPU, a notoriously hot Intel i7 7700k, is currently running with a 4.8GHz overclock at 1.235V and it stays in the 60s during extended gaming sessions. A couple of times my fourth CPU core (reliably the hottest one) might momentarily peak at 70 degrees, but nothing above that. By way of comparison, my most recent AIO liquid cooler, the Corsair H100i V2, would regularly get into the mid-80s even with no overclock on the CPU.

The Corsair wasn't supposed to be getting those temperatures, which means something was likely wrong with it. What was the problem? I can't say for sure. It's still under warranty, so I may send it in for a replacement, just to see if I was indeed experiencing a malfunction.

It could've been that the pump was failing in some way, or that there was some blockage in the flow of the coolant. It could've been that I applied the thermal conductive paste incorrectly, though I've applied and re-applied that stuff so many times over the years that it seems unlikely. That unknowability is part of my gripe with liquid coolers. When they work, they work fine. When something goes wrong, it's hard to identify the problem.

The best thing about finding a good CPU cooler is that I no longer have to worry about CPU cooling. Finally, peace! I can empty out the part of my brain that had been obsessing over airflow and radiator cooling and make room for other things. At last, I can relax... until something new goes wrong and I'm back to obsessively tweaking and troubleshooting once more. This is PC gaming, after all.