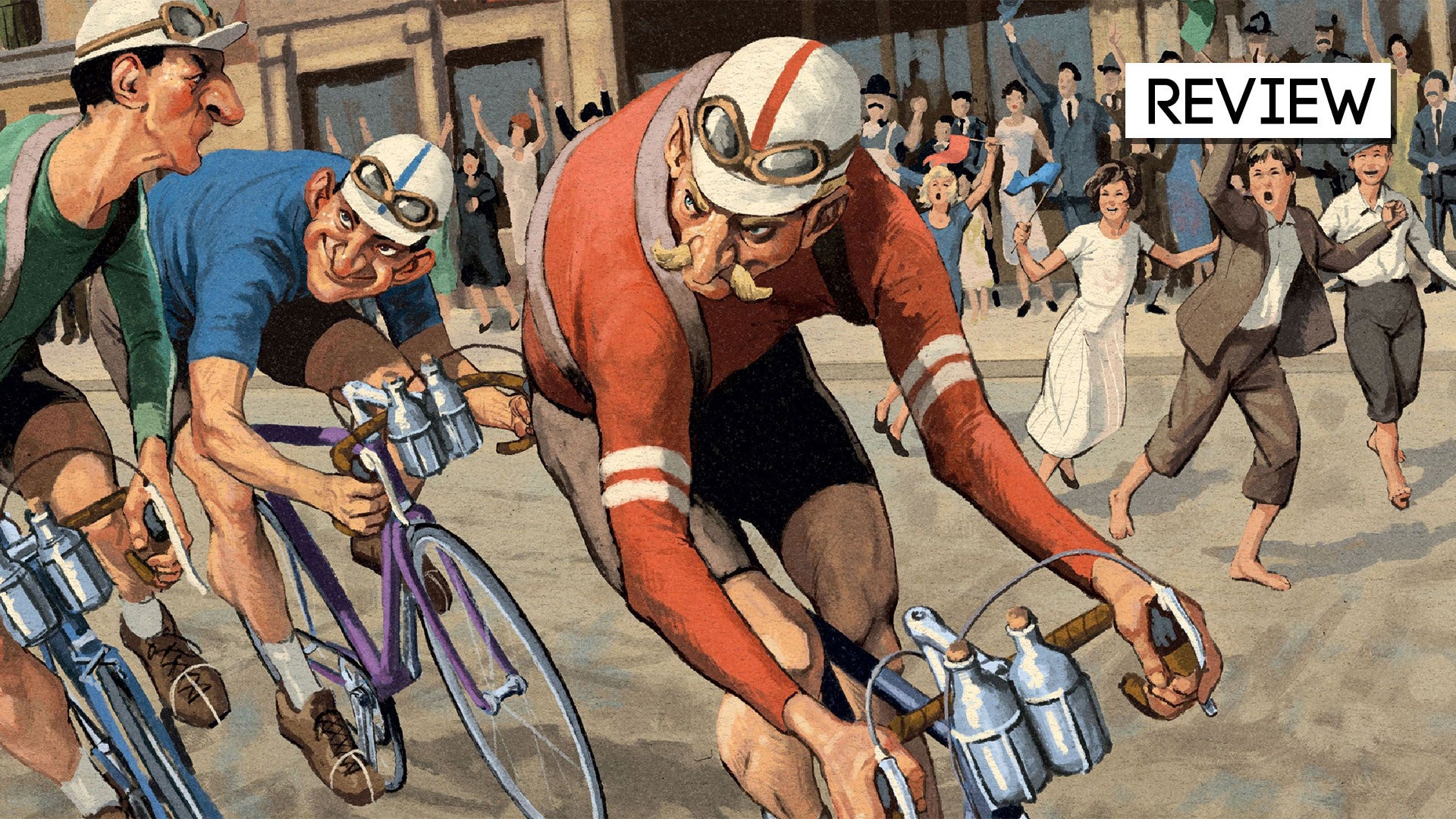 Flamme Rouge is a game about early 20th century bicycle races, and I promise you, it is a lot more fun than that sounds.

While unable to actually use the words, since it doesn't have the licence, Flamme Rouge — a "Red Flag", waved when a race is one kilometre from the finish — is based on early Tour de France contests, and while playing out as a very simple board game, actually manages to replicate many of the key factors and strategies of such a race.

It's a literal experience, with each player taking control of two racers, a Rouleur and a Sprinteur. The former is designed to chug along at a constant pace, happy to roll with the main pack, while the latter is able to employ massive bursts of speed to race out in front.

Flamme Rouge is played on a modular track, each rider represented by a plastic miniature, and they're controlled by drawing and then selecting cards from a deck. Each card carries with it a certain progress score that moves your racers along the grid-based course, but there's more to it than just hoping you draw a high number and rolling with it.

The game has a built-in rubber-banding system that imposes stamina penalties on racers breaking away from the head of the pack, while at the same time providing small slip-streaming benefits to those nestled in behind them. Just like real bike races.

This creates a delicate, nudging tone for the opening half of a race, as players jostle to settle in amongst the pack and bide their time, waiting for the best opportunity to make their move. Move too slowly and you'll get left behind, get it just right and you'll ride the slipstream through much of the race, letting the lead players do all the work for you, and push out too quickly and you'll be struck with fatigue.

The way this fatigue is handled is probably the most important part of Flamme Rouge's design; the game is built around you having a deck of cards, from which you draw a small hand giving you some speed options every turn that tend to range from four to eight grid spaces.

Every time you're handed a stamina penalty, though, you need to draw a card that will only move you two, and must add it to your deck. The more fatigue you suffer, the more of these cards are added to your deck, the more likely it is you'll then draw them into your hand and have your speed options limited in the home stretch.

Complicating things a little more are the presence of hills, which can break a race's pacing wide open. Racers heading up a hill will find their speed options limited and slip-streaming disabled, but anyone getting over the top and moving downhill first will find that they can quickly pick up speed and make a break for it.

So races aren't as much about simply going as fast as you can, but pacing yourself, knowing when to conserve your strength and sit in with everyone else, and when to risk it by throwing down and surging for the win. Breaking off for an early lead may look cool, but will probably cripple you towards the end of the race, but hanging back too long can also doom you if you leave your run too late.

The real fun comes from the escalation of stress throughout the race. Things always start out smooth and easy, players content to take their time and get a feel for the race, but with each passing turn, as you get closer to the finish line, the tension ratchets up accordingly, with winners and losers often decided as much by what happens in the last couple of turns as the dozen that came before.

Races can be over pretty quickly if only two or three people are playing, but the way you're able to redesign the track between races means it's easy to get sucked in to playing longer sessions, ramping up the difficulty with each new course.

I wasn't interested in the theme of this game at all when first asked to play, but what helped link a disinterested gamer to a fun-as-hell experience was Flamme Rouge's art, a bright and cheery caricature of early 20th-century design that helps both set the tone and keep things lighthearted.

There's little more to this game than drawing some cards and moving two plastic riders along a track, but the fact it's so simple — and ties so elegantly into the actual strategies of competitive bike racing — makes Flamme Rouge one of the best racing board games I've ever played.