I was recently on vacation and away from Monster Hunter: World while I enjoyed the wonders of California, and now that I’m home, I’m catching up on new quests. The largest and, to me, the most exciting of the game’s recent developments is the addition of Final Fantasy XIV’s Behemoth. While the fight can be frustrating and occasionally unfair, it’s the most teamwork-intensive of the game thus far.

The Behemoth is the final boss in a short quest chain that also includes a fight against a superpowered and oversized kulu-ya-ku. The design of the fight emphasises team communication and attentiveness, in part because it is structured more like an MMO raid than a normal monster hunt.

Unlike most fights, players receive prompts of the attacks that the Behemoth will perform. This gives them the opportunity to coordinate actions or find ways to adjust their tactics with more awareness. For instance, if the Behemoth starts casting the wind spell Charybdis, it’s a good idea to fire a flash pod to interrupt the attack. The Behemoth fight allows for planning and forethought and rewards the players who take advantage of that. It’s a much easier fight if you pack extra crafting supplies to make more flash pods or teammate healing life powder.

I hunted the Behemoth with Kotaku readers during a livestream, and each of us fell into unofficial roles. The fight includes a mechanic much like MMO tanking, in which it’s possible for one player to hold the Behemoth’s attention by repeatedly smacking its face.

We had a bowgun user serve as our tank and shoot the monster in the mouth, and meanwhile, another player tried to mount it. That second player drew out the mount as long as possible to give an opening to damage dealers like myself. Throughout it all, another player stocked up on items and acted as an unofficial healer. This all felt different than the usual Monster Hunter dynamic, which is less structured and allows more moment-to-moment improvisation.

If you prefer the game’s usual style, this fight will be a disappointment. For me, it was a refreshing change of pace.

There is one key aspect to the Behemoth fight that can be frustrating, particularly if you’re joining a random group. It’s the attack called Ecliptic Meteor. Throughout the battle, the Behemoth casts a spell called comet.

It pulls down falling rocks from the sky and scatters them around the battlefield. When it finally casts Ecliptic Meteor, you need to hide behind one of the fallen comets, or else you’ll get instantly killed by a massive explosion that engulfs the entire battlefield.

On the one hand, Ecliptic Meteor is a challenging but exciting attack that forces players to mind their positioning. On the other, the attack’s design can lead to unfair circumstances. In one instance, I got hit by the Behemoth so hard that it locked me in a stunned animation.

When it immediately cast Ecliptic Meteor, I had no time to run anywhere. In another case, a teammate of mine ran to hide behind a comet that had fallen near a wall, but they soon found that there wasn’t enough room to for them to squeeze behind it. If you’re playing with reliable friends, you should be fine, since your tight-knit teamwork will allow you to better recover from the occasional unfairness of the meteor explosion.

But I imagine that players using SOS flares to play with random hunters will have their share of tragedy. Even if the entire fight has gone well up to the Behemoth’s dying breath, it’s entirely possible to fail the hunt at that point, since the monster’s final attack is a last-ditch Ecliptic Meteor cast seconds before it dies. 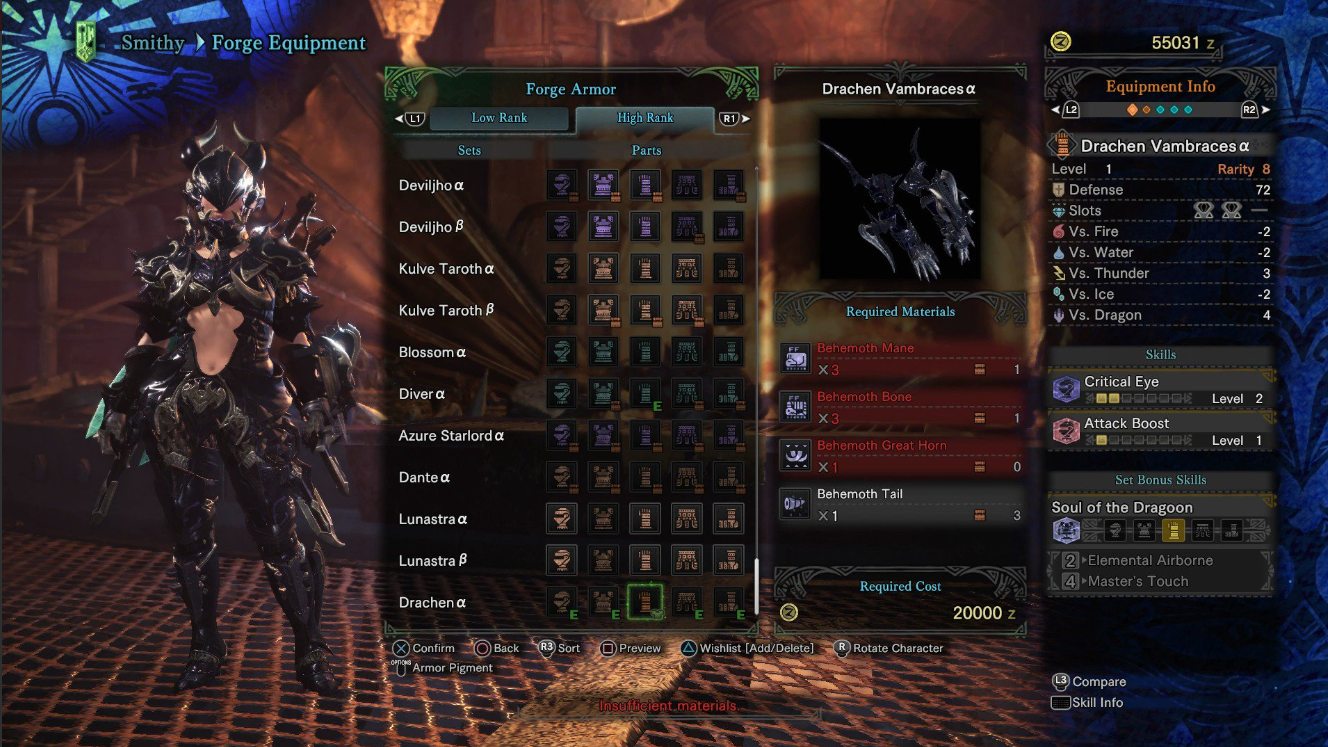 I still need the gloves. And, honestly, more money.

The rewards are solid as well. Behemoth parts can be used to craft the Drachen armour, an armour set modelled after Final Fantasy’s iconic dragoons. It has a combination of affinity and attack boosting bonuses, as well as an armour set bonus that includes “Master’s Touch.”

It’s good for anyone looking to keep their weapon’s sharpness up. The Gae Bolg insect glaive has a dragon element and high affinity, making it a good alternative to that Deviljho glaive you’ve been carrying around.

I’ve appreciated the ways that Monster Hunter: World has experimented with higher level hunts. The Kulve Taroth siege, for example, encourages cooperation between an entire online session and challenges players to break monster parts. The Behemoth fight also encourages cooperation, as well as requiring strong spatial awareness and responsibility sharing. I enjoy fighting enemies who are tough because of strong attacks, like the tempered elder dragons, but the Behemoth battle shows a new way to challenge players.

It’s not quite the Monster Hunter way, and that’s why I like it.