There’s an air to Voltron: Legendary Defender‘s seventh season that telegraphs the fact that the show is soon coming to an end, but it’s also shot through with a forward momentum suggesting that there might be more to the series’ story even beyond the impending final season.

I recently spoke with Voltron‘s co-executive producers Lauren Montgomery and Joaquim Dos Santos about what stories they really wanted to explore at this late stage in the game, where the Paladins are emotionally and what’s next for the show. (You can read an earlier part of our conversation here.)

The current season, the pair explained, is a homecoming meant to highlight just how much its characters have grown since we first met them.

This interview has been edited for clarity.

Kotaku: You really took your time this season before bringing the fully formed Voltron back into the show. The Paladins figure out why, obviously, but talk to me about how you came to the decision to make this season a lot more about the Paladins coming together outside of the Lions?

Joaquim Dos Santos: One of the elements we really wanted to play with was to take the Paladins’ tools away from them. Even though they still have these awesome Lions, they’re not working at full capacity after their battle with Lotor. This season, we really wanted to emphasise just how vast this universe is and how lost at sea the Paladins are now.

Lauren Montgomery: We also knew that the back half of the season we were going to both play up the action and introduce new players into the story, so taking that time in the beginning to really delve into the Paladins’ relationships with one another was really important to us. We wanted to them to have time to bond as a team again, given that Keith’s back as their leader, before they really settled into the big Earth-saving mamma-jamma.

Kotaku: The Paladins have come so far over the course of the series in terms of coming into their own both as individuals and as a team. What that something you really wanted to emphasise?

Montgomery: Yeah! The things we get into with Hunk are a really good example of that evolution because we’d always felt as if Hunk was the guy who got along with everyone. He’s always been part of that friend dynamic where, if you removed him from the plot, you’d just have a show about a bunch of people who don’t like each other hanging out.

His being the glue that held everyone together was a big deal for us that we’d addressed in the past with his cooking and diplomacy skills, but we really wanted to hit the nail on the head this season.

Kotaku: You kind of get that from Keith’s arc as well.

Montgomery: That moment of Keith’s almost reverting a bit to his old, angry self when he goes “space mad”, he’s already accepted his leadership role, but for a moment there, he loses focus and thinks to himself, “What are we really other than people who’ve been brought together by circumstance?”

Even though that might have been the emotional place that Keith and the other Paladins first met, we really wanted to emphasise that they’re all still there together as a unit. No one decided to just quit and say “I’m out” and head back to Earth. It’s all meant to highlight the fact that they’ve stepped into their shoes and become more heroic.

Kotaku: Is Keith’s darkness something that’s going to become a recurring issue for him?

Dos Santos: I think it’s something that he’s really put the time and energy into learning how to control — to balance it. In desperate situations, yeah, there’s this beserker element to him that he can call upon if he needs to.

Montgomery: Right, the biggest culmination of that was in his big fight with Shiro and I don’t think we’ll see anything quite on par with that in the future. But it’s something that’s definitely still in him and a part of how he was raised and his being half-Galra. 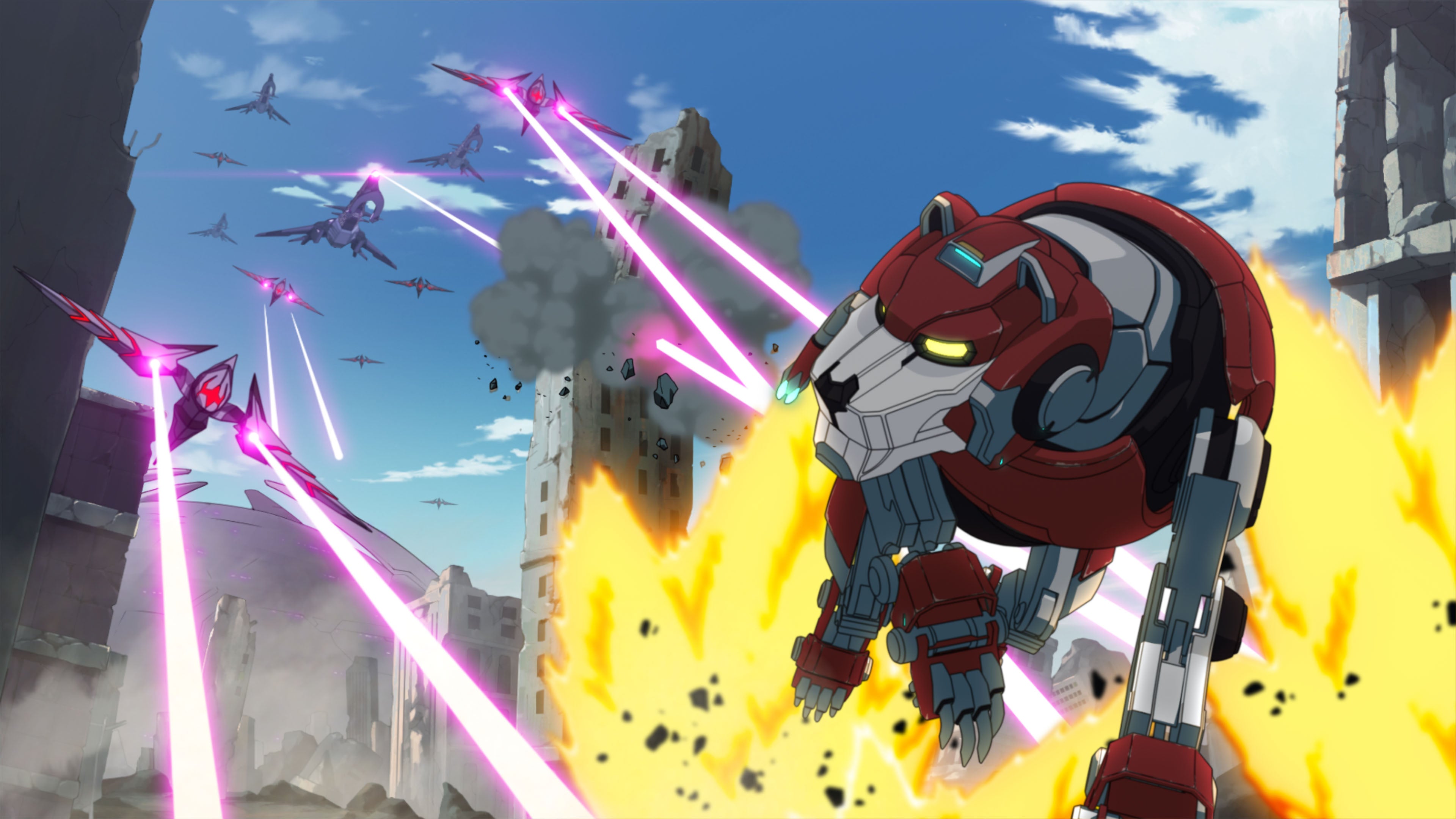 The Red Lion in the midst of a battle with the Galra. (Image: Netflix)

Kotaku: As much time as the season spends reflecting on the Paladins’ emotional states, you also bring in this new team of pilots in a way that definitely gives you the sense that they might be the next generation of Voltron-related defenders.

Dos Santos: We wanted to bring a different energy to the show.

Montgomery: Yeah, our guys have been out in space doing awesome Voltron stuff, but there are still a lot of people on Earth that really have to hold shit down. So, when this crazy invasion suddenly happens, they needed to be prepared. It sounds kind of odd to say because Voltron‘s already got a team of hotshot pilots and you might think to yourself ‘why does the show need more of them?’ But the answer is simple: Our hotshot pilots just haven’t been on Earth.

Honestly, though, we’re huge Macross fans and this was our way of marrying it to Voltron.

Dos Santos: If you’re a fan of anime and familiar with these kinds of stories, there’s a certain kind of tingle you get when characters like these show up, because they’re a hint that a new generation has arrived and that’s kind of an itch we’ve wanted to scratch for a while.

There are so many stories, I think, to be told about the Galaxy Garrison, so this was really our way of bringing that into the series.

Kotaku: With these new pilots and the Garrison stepping its tech game up, does this mean that Earth’s finally ready to become a power player in Voltron‘s larger world?

Montgomery: This season is definitely a first step towards Earth becoming a larger player, because up until now, the show’s really depicted just how low-tech it is compared to the Galra and Alteans. So now that they have this technological jumpstart, they really have a chance to take a seat at the intergalactic table.

This is their opening foray into a much larger space in what might end up being, you know, an intergalactic council.