James Bond, waiting for his chance to be in a movie again. (Image: MGM)

Over 760,000 Australians Discovered Video Games Because Of COVID-19, Survey Says

Psylocke is one of Marvel Comics’ most instantly-recognisable characters across a variety of media, in large part because of the character’s distinct aesthetic that artists have developed for her over the past 40 years or so. Now, though, the psychic hero is majorly reinventing herself for the first time in decades in a way that illustrates how frozen in time and, frankly, racist a lot of her depictions have been in the past.

When you think “Psylocke”, you envision a scantily-clad Asian woman with a generally purple motif wielding a katana. But that really only became a major part of her overall style after Uncanny X-Men #256 where Betsy Braddock (Psylocke’s civilian name) underwent a mind swap with a Japanese woman named Kwannon that would forever change both women’s lives.

The swap left Betsy and Kwannon with a blend of one another’s respective telekinetic and telepathic abilities, but it also had the strange side effect of altering their genetic structures and appearances. For Betsy, a white woman, this meant that, at least physically, she was effectively “transformed” into a Japanese woman, a transformation that would become permanent when Kwannon (still in Betsy’s original body) subsequently died. 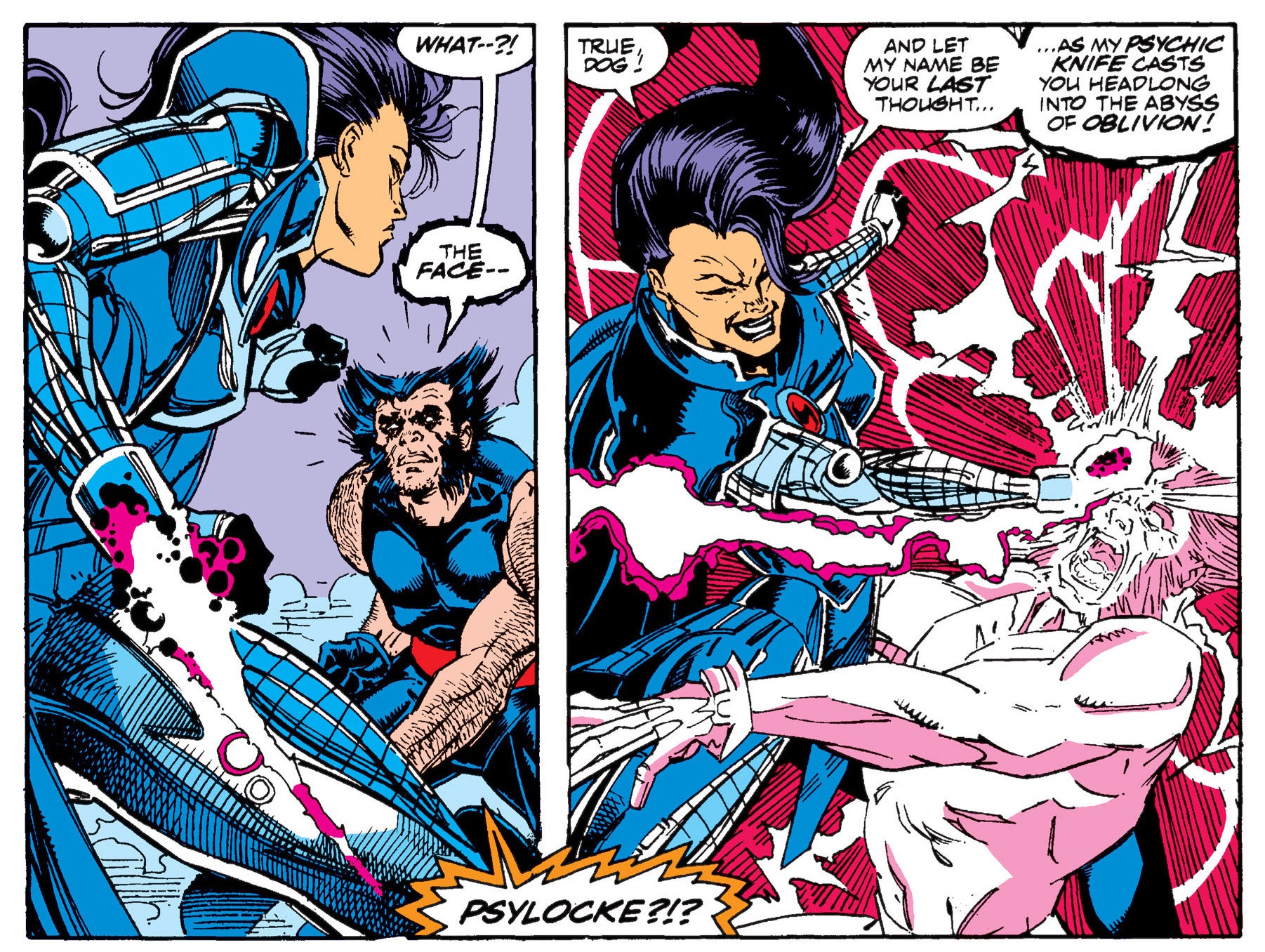 The transformed Psylocke in one of her first battles with Wolverine in Uncanny X-Men #257. (Image: Jim Lee, Josef Rubenstein, Glynis Oliver, Marvel)

Origins such as Psylocke’s aren’t exactly out of the ordinary for Marvel’s X-Men comics where body swaps happen all the time, but over the years, the optics of Betsy being presented as a “Japanese warrior woman” have aged beyond poorly.

The final issue of Marvel’s Hunt For Wolverine: Mystery in Madripoor (out this week from writer Jim Zub and illustrators Thony Silas, Leonard Kirk, Felipe Sobreiro and Andrew Crossley) touches on the complexities of Psylocke’s identity in a way that you seldom see in comics. But the direction Psylocke seems to be heading in might not actually be the progressive course-correction it seems to be on the surface. 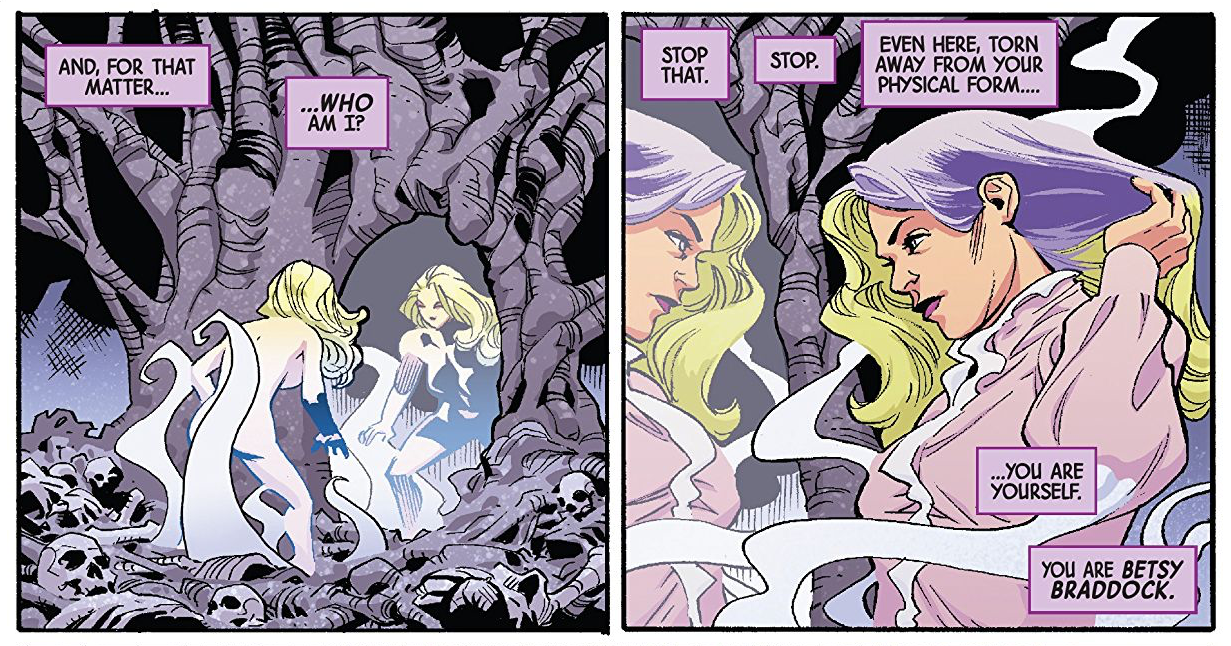 Mystery in Madripoor develops as Kitty Pryde leads a team of X-Men on a risky mission to the lawless island where they hope to find and interrogate Magneto to find out what, if any, role he played in the disappearance of Wolverine’s corpse. Ultimately, the team comes face to face with a group of villains led by Wolverine’s ex-wife Viper who have Magneto in their possession, prompting the X-Men to save their on-again, off-again nemesis.

During an intense battle with Sapphire Styx, an obscure mutant villain with the ability to drain life-force, Psylocke becomes trapped within a kind of psychic limbo where she reflects on her past as a superhero and the person she was before joining the X-Men.

Though she doesn’t initially acknowledge it, Psylocke turns her predicament into an opportunity to use her vast psychic powers to create a new Caucasian body for herself complete with a shock of lavender hair. 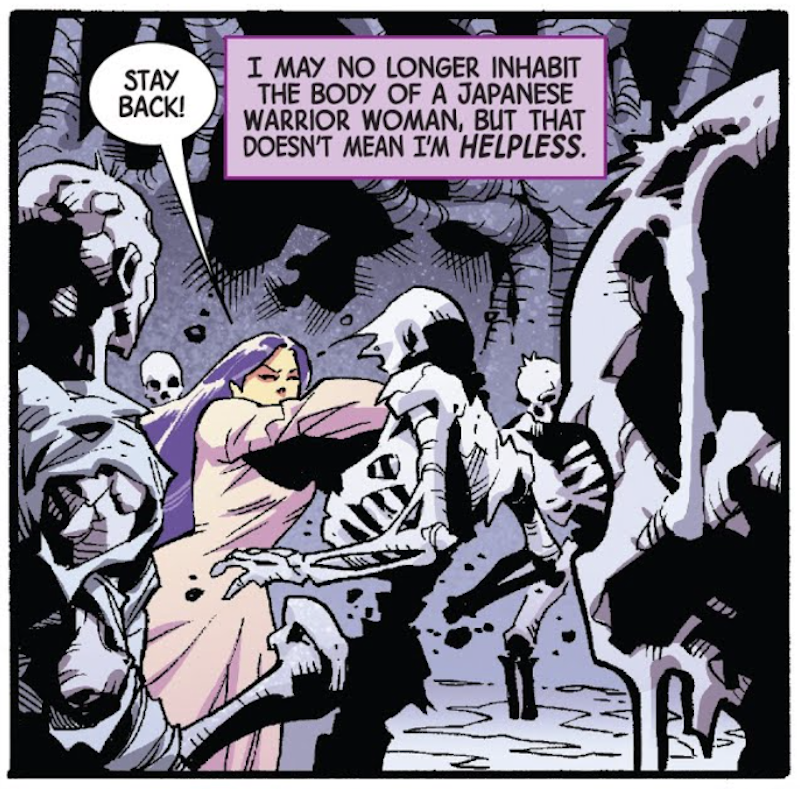 It isn’t long before Psylocke’s back in the physical world duking it out in her new body, which the other X-Men are astonished to learn she is no longer Japanese.

As the comic comes to a close, Betsy pulls away from her comrades to take stock of just what she’s been through and, interestingly, it’s Jubilee — one of Marvel’s most well-known characters of Asian descent — who seeks her out to see how she’s coping.

From Betsy’s perspective, she’s finally her true self again and in control of her destiny. Unbeknownst to her though, yet another body resembling Betsy/Kwannon is alive and well back on Madripoor.

Narratively, Mystery in Madripoor reads a lot like a story from Chris Claremont’s X-Men run when Psylocke was originally introduced.

The ‘80s were a different time — a time when comics featuring white women turning into hyper-sexualised, racialised caricatures of women of colour were the kinds of books Marvel was more than comfortable putting out. Perhaps even more importantly, it was also a time when there weren’t nearly as many creators of colour in positions of power within the industry to address whether plot lines such as Psylocke’s were in bad taste.

Claremont intended for the Psylocke/Kwannon swap to be temporary, but his departure from the publisher in the early ‘90s led to the change sticking and becoming a key part of the way fans understood her.

The difficult thing about characters such as Psylocke, whose origins are steeped in the (sometimes problematic) cultural norms of the past, is that there’s no way to simply “undo” the things about them that read as offensive by today’s standards.

Fox sidestepped the issue entirely for X2: X-Men United by casting Mei Melançon (who is part Japanese) and X-Men: Apocalypse with Olivia Munn (who is part Chinese), and ignoring her Japanese origins — or any origins, really — but the historical record of Marvel’s comics makes that considerably harder to do. 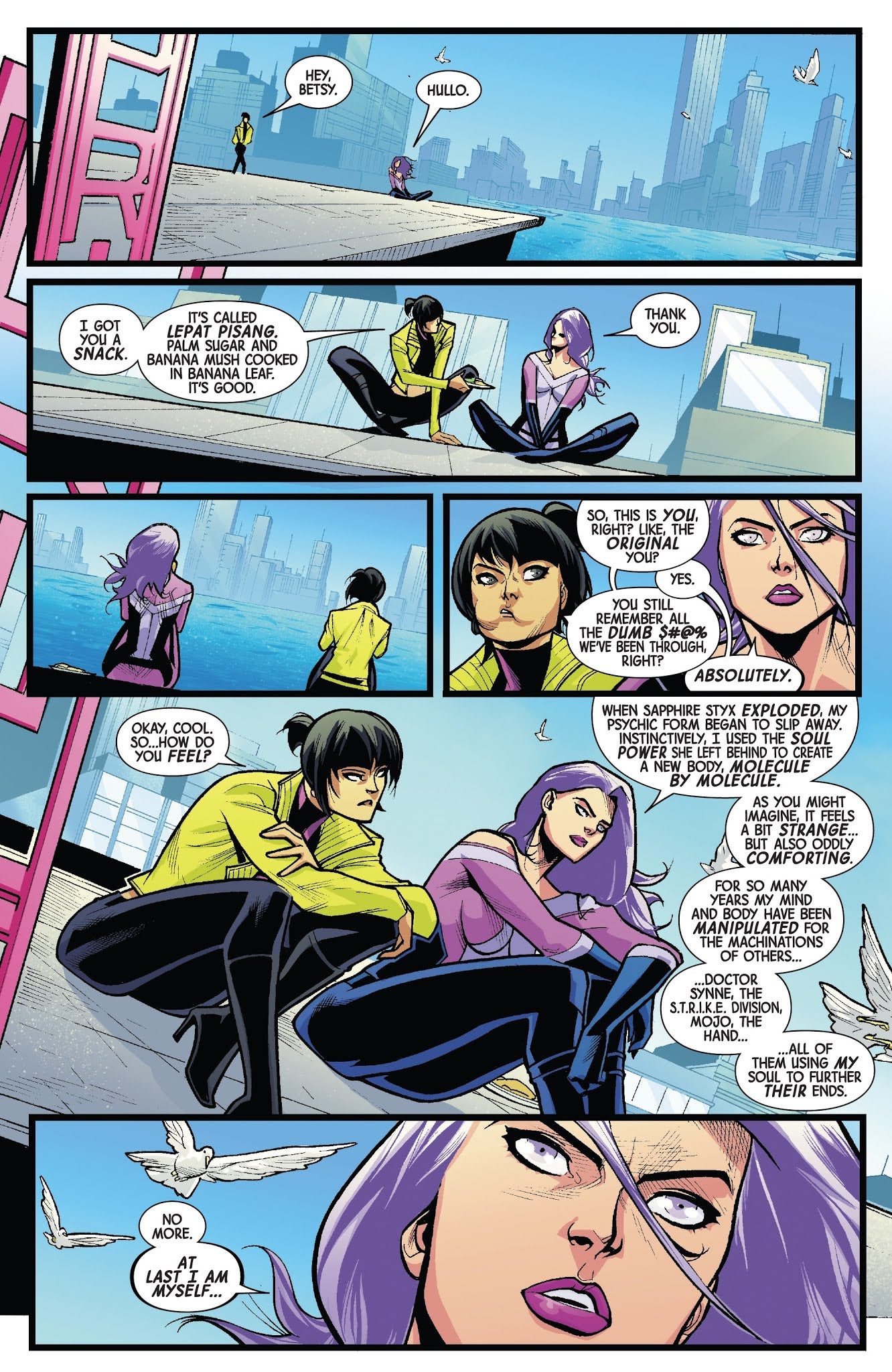 It’s tough to say just how one goes about telling future stories about Psylocke in an age where we all more or less agree that there’s still a need for better representation in comics and that people who aren’t Japanese shouldn’t pretend to be. But perhaps the answer lies with Kwannon and not Betsy.

We’ve spent years getting to know the white woman wearing Kwannon’s skin, all the while never really giving Kwannon herself a chance to become a fully-formed, three-dimensional person with agency of her own.

Perhaps other creators in future stories will take the time to develop such a thing, but as things stand we’re down one Asian-presenting character, and the way she’s seemingly being written out of Marvel’s X-Men titles is a far cry from being anything like the thoughtful, introspective send-off she deserves.