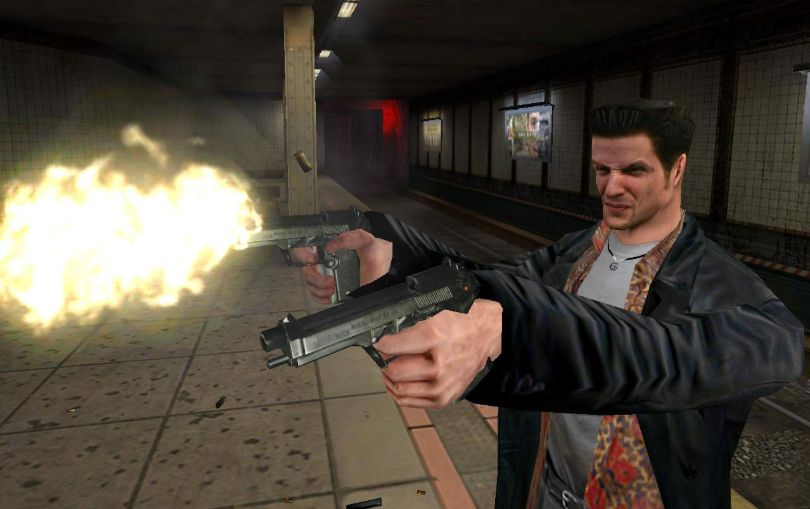 Yesterday, I started playing through Max Payne on Kotaku US’ Twitch channel. Returning to the 2001 game after so many years reveals a smart and surprisingly funny game full of experimentation. And, of course, kickarse bullet-time gunfights.


I first played Max Payne in junior high when my friend Dan brought the CD-ROMs over to my house in the summer. It’s hard to explain how shocking the game was; I’d never seen anything so dirty or gleefully violent.

Max Payne’s New York was a caricatured shanty city of crumbling row houses, snaking underground tunnels and secretive gangster bars. Everyone slept on grimy mattresses and had several guns under their pillows. Max Payne handed you a Desert Eagle, some John Woo magic, and let you to dive right in.

Replaying it yesterday, I was struck by how much that feeling has endured. Max’s one-man crusade against the mob is as teeth-grittingly awesome as I remembered.

A lot of that has to do with the combat. It’s tempting to look back at bullet-time, the game’s special slow motion ability, as a gimmick that led to far too many imitators. But it’s the centre around which the rest of the game revolves. It isn’t just a power-up; it’s an incredibly smart tool for managing the game’s pace.

Much of this has to do with how fragile Max is. This is a punishing game, even on the default difficulty. Playing it like a normal shooter is a recipe for disaster — Max dies in three to four hits, and enemies come in deadly groups.

Bullet-time is an equaliser, an on-demand state of demi-goodhood that turns the most unfair encounters into brilliant puzzles.

The average Max Payne gunfight lasts about 10 seconds; smart application of bullet-time expands those sudden encounters into miniature blood operas. It feels like running a stunt crew, practising over and over until you finally get the perfect shot.

It creates a dramatic mood that’s complement by the cheesy story. Max’s overly verbose inner monologues — replete with mythological allusions and musings on the American Dream — come hand in hand with overacted scenes full of childish gangsters. The villains are dopes, silly criminals in oversized suits and horrible New York accents. Every mafioso feels like a rejected Dick Tracy stooge.

The contrast is spectacular; Max’s lyrical ramblings clashing with nasally taunts that would make my extended Italian relatives roll their eyeballs right out of their skulls. Max Payne’s mixture of neo-noir slapstick is unique and refreshing even now.

The first game offers a strong roadmap for the rest of the series. The rest of the series shifts from Max Payne 2’s playful deconstruction to Max Payne 3’s self-serious character study. It works because Max’s tough guy persona can be moulded to fit nearly any story type and narrative need.

Hard-boiled sane man, self aware video game protagonist and redemption-seeking madman. He can be all of these things in equal measure and it never seems strange. His excessive gun battles fit into nearly any video game frame, manifestations of a frustrated soul wandering from genre to genre. He’s fantastic.

I hope to play through the entire series by the end of the year, and I couldn’t be more excited. Max Payne’s high-pulp embrace of video game cliches is unique and worth remembering. I don’t think there’s been anything else like it. At the very least, no one’s done it this right.