No Man’s Sky Has Griefers, But Tools To Keep Them Out Are On The Way

Even with all its recent Next update additions, No Man’s Sky is still mostly a game about exploration for exploration’s sake. It makes a perverse sort of sense, then, that within that framework people would also find a way to grief purely for the thrill and power of it.

If you opt into No Man’s Sky multiplayer, other players can join you in exploring the universe. Or they can attack you. Or, even more insidiously, they can delete portions of your base and use the game’s terrain tool to pull the rug right out from under it.

For the most part, full-on multiplayer – added as part of the recent Next update – is meant to be a cooperative experience, so this has been a pretty jarring discovery for players.

“I want to play with people, but not if I have to babysit my base the entire time and kick players who get close,” wrote a player named CALLxMExACE to kick off a popular thread on the No Man’s Sky subreddit.

“I have an issue forcing a multiplayer game to be solo play only. I can only play with my fiance. Should a stranger join by random, I’m forced to kick them. Meet new travellers now? I hope not! You don’t know who’s joining your session/group post to grief or will do so down the road.”

As of now, all you can do is kick offending players. You cannot, say, put limits on your base so that only friends can modify it or opt out of PVP. Whether you want to pal around with friends or stumble across a soulmate with whom to explore the cosmos, there’s always a risk. This has given rise to a handful of confused and irate threads on the topic, as well as calls for stricter multiplayer controls and permission systems. 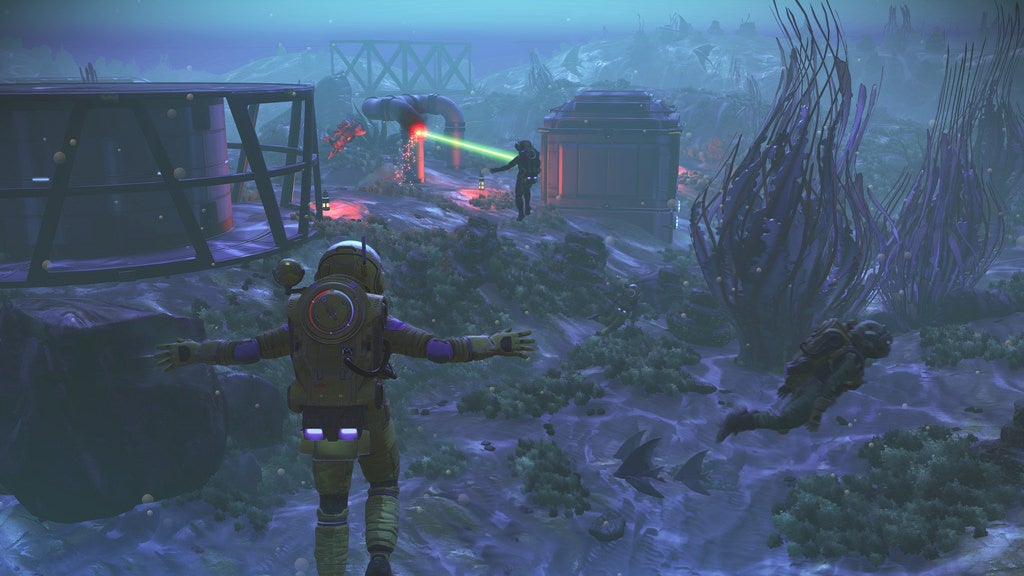 In my seven hours with a multiplayer-enabled save, nobody has randomly joined my game, and I haven’t experienced any griefing. So your mileage may vary. It’s also worth pointing out that No Man’s Sky doesn’t incentivise griefing at all: If you kill another player or mess with their base, you don’t get any loot or supplies. You just come away with the knowledge that you’re kind of a dick, but a powerful dick who’s burned the land, boiled the sea, and taken the sky from somebody you’ve never met before.

A couple people I spoke to who enjoy the game’s griefier aspects said that’s enough for them. One, who goes by the handle Sonicchill, recently solicited “hostile players” to come grief them in permadeath mode and publicly gave out their PSN name. Sonicchill said in a DM that it was all in the name of “fun.”

“I often enjoy doing things differently than the majority,” they said. “I don’t exploit loopholes at all. I just do what I want to do, preferably something new or different if possible, without cheating/exploiting.”

“The moment that I learned that No Man’s Sky would support non-consensual PVP, I saw an opportunity for an entirely new campaign of galactic conquest.”

Another, Zarek Null, extols the virtues of what he calls “non-consensual PVP.” His goal in games like No Man’s Sky and Elite Dangerous – where he claims to have become “infamous” – is simple: he just wants to be “Overlord of the Galaxy.” He does this through PVP and, in No Man’s Sky’s case, claiming and naming territory.

“The moment that I learned that No Man’s Sky would support non-consensual PVP, I saw an opportunity for an entirely new campaign of galactic conquest,” he said in a DM, explaining that since No Man’s Sky players rarely take advantage of the opportunity to name their planetary discoveries, he can swoop in and name somebody else’s system “something like ‘Zarek Null’s Domain #503.’”

“At that point, I become, in name, the permanent owner of that star system,” he continued. “As overlord of that star system, I then consider it my right to demand compensation from other players for their use of my planets. But sadly, they rarely comply, leaving an overlord such as myself with little option but punish their disobedience with the use of aggressive force.” Null, you may not be surprised to find out, has funneled his love of aggressive PVP into a character he plays on YouTube, complete with a disarmingly deep, Saw-like voiceover. He really does love the way PVP and, by extension, griefing currently function in No Man’s Sky, though.

In a thread where people were mostly complaining about PVP, Null defended it, pointing specifically to emergent elements, the way explorers and combatants are mixed into the same space-y soup instead of separate modes, and fun tools like terrain manipulators. Fights can start underground and end up in the stars, mixing in base assaults, freighter battles, and everything in between.

Other players pointed out that things rarely work out that way, and there’s nothing tangible to be gained from picking on people. But Null enjoys the contrast between peaceful explorers and spacefaring warlords. He thinks the fact that No Man’s Sky blurs the lines between them is what makes the multiplayer experience unique.

“Am I surprised that those I might vanquish would be unhappy with their fate?” he said. “Not at all; their aversion to defeat is a natural reaction. I do realise that many of the galaxy’s inhabitants are peaceful explorers. But that very fact is precisely what makes this galaxy so ripe for conquest.”

No Man’s Sky developer Hello Games has been keeping a watchful eye on griefing and has so far found it to be an “isolated” issue, director Sean Murray told Kotaku in an email. “I believe this is partly because of how our matchmaking works in the background, and also because griefing is not rewarded in No Man’s Sky,” he said. “It also is a testament to our community, which have already created so many positive stories.”

He noted, however, that the team takes the issue “seriously” and will be adding more controls around multiplayer permissions in an upcoming hotfix. Their goal is to help players “choose the level of interaction they have with friends, as well as strangers.”

Random player joined my game in @NoMansSky and we just sat and silently enjoyed the view together. An incredibly wholesome online interaction. pic.twitter.com/kOPlPve5PQ

In a big, open multiplayer game like No Man’s Sky, that degree of choice is essential. But it’s also kind of a shame that it needs to be, given that the game’s current anything-goes approach makes it all the more impactful when strangers meet and watch sunsets (or wild outer space light shows) together instead of dropping each others’ bases into planets’ molten cores.

Null also pointed out that it’ll make it harder for him to take over the universe.

“If Hello Games implements a base permission system that prevents hostile players from destroying your base, then they will be making a reasonable business move, likely to be appreciated by the majority of the playerbase,” he said. “But naturally, as an aspiring galactic overlord, I cannot in good conscience endorse such a change.”