For such a popular genre, there really isn’t much to choose from when it comes to quality city-building games these days. There’s Cities: Skylines and… that’s it, unless you want to pick up a classic SimCity. So firing up Pocket City, and loving it, has been one of the nicest surprises of the year. Doubly so because it’s a phone game.

It feels like the mobile version of SimCity that EA released in a timeline that never fell prey to predatory mobile game pricing structures. In terms of its design, and even its interface, Pocket City is instantly familiar, from the colour-coded zoning to the water pumps to the isometric viewpoint. If SimCity 2000 had been remade with a hi-res sheen, this may well be what it looked like.

Though of course Pocket City isn’t a SimCity game, and it hasn’t been made by EA. It’s an all-new title by Codebrew games, and what makes it special is that it’s both a very good city-building game and a very good phone game, a rare thing these days.

There’s a free version of the game you can try out, or you can pay a few bucks and just buy the whole thing. No microtransactions, no pranks, no ads to sit through. You just buy the game and it’s yours, something the studio are so big on that they made it part of the game’s tagline on app stores: “Build a city as mayor! No IAPs”.

The game design reflects this; there’s a linear mode you can play where you have to unlock buildings and services through experience, or you can just start on empty ground and build your own sandbox city without having any limits on your options or finances.

Pocket City is a game content to let you build your town with the broadest possible brushstrokes. It gives you both the veneer and some of the more important, deeper systems from the genre at the same time, while cutting out a lot of the stuff in between.

This gives you less information to consult when building things, but there’s also less business tucked away in multiple menus to bog you down, since at the end of the day this is a mobile title, not a complex desktop simulation. 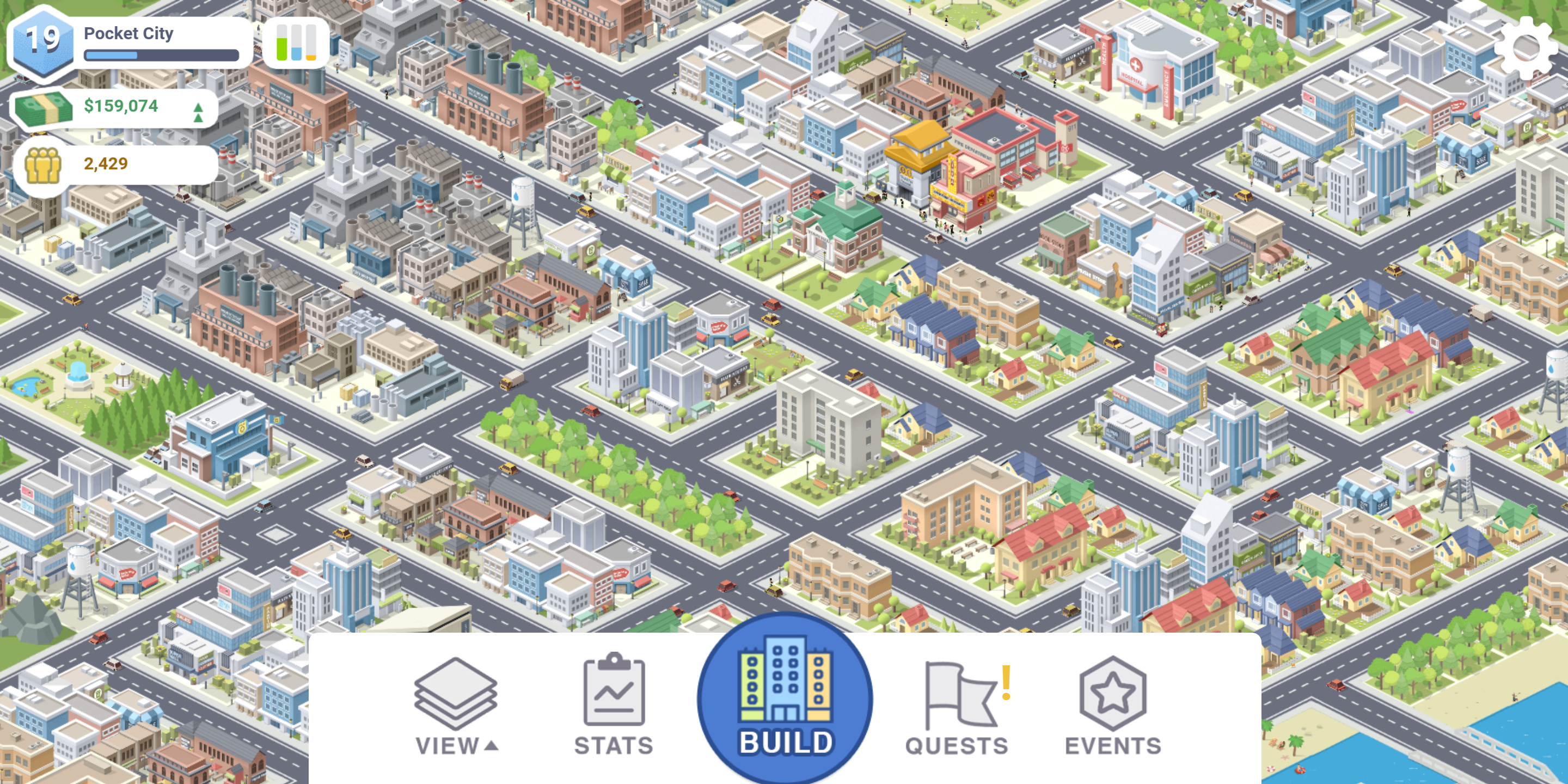 The game defaults to a portrait display mode on phones, but things are much easier to manage in landscape mode (which you can toggle in settings).

It’s a tough balancing act to get right, but I think Pocket City nails it. There are still stats and figures to be found, and you can even manage the city’s imports and exports, but everything you ever want or need is never further than a couple of thumb taps away thanks to a smart and fast user interface, and I was never worried about fiddling around with minutiae such as power lines or sewage.

There’s even a good amount of personality in the game. Various systems such as banking and emergency services are represented by actual characters, like the old SimCity advisers, and you can zoom right down to street level to see how things are going, which not only gives you some feedback via speech bubbles but also lets you monitor crimes and fires as they happen.

Pocket City is out now on iOS and Android.