The Creators Of Injustice Vs. The Masters Of The Universe Talk About Making Batman And Orko Best Friends

comicsdc comicshe-maninjustice vs. the masters of the universesan diego comic con

The yearly Comic-Con International in San Diego always provides multiple doses of different fictional worlds crashing together. Fittingly, the first issue of a comic where He-Man’s crew meets a fractured-mirror Justice League came out during the annual nerd convention.

Injustice vs. the Masters of the Universe teams up Prince Adam and the warriors of Eternia with Batman, Starfire, and other characters from the alternate reality ruled by an evil Superman.

The miniseries, written by Tim Seeley and drawn by Freddie Williams III, with colours by Jeremy Colwell and lettering by Wes Abbott, finds the Dark Knight recruiting the Strongest Man in the Universe so that he can kill the Superman of the Injustice dimension. I talked with Seeley and Williams about playing with toys from two very different universes.

Freddie Williams: Did he say the cartoon was crap?

Tim Seeley: Nooooo. I loved it.

Williams: We’ll have to agree to disagree. I love it. 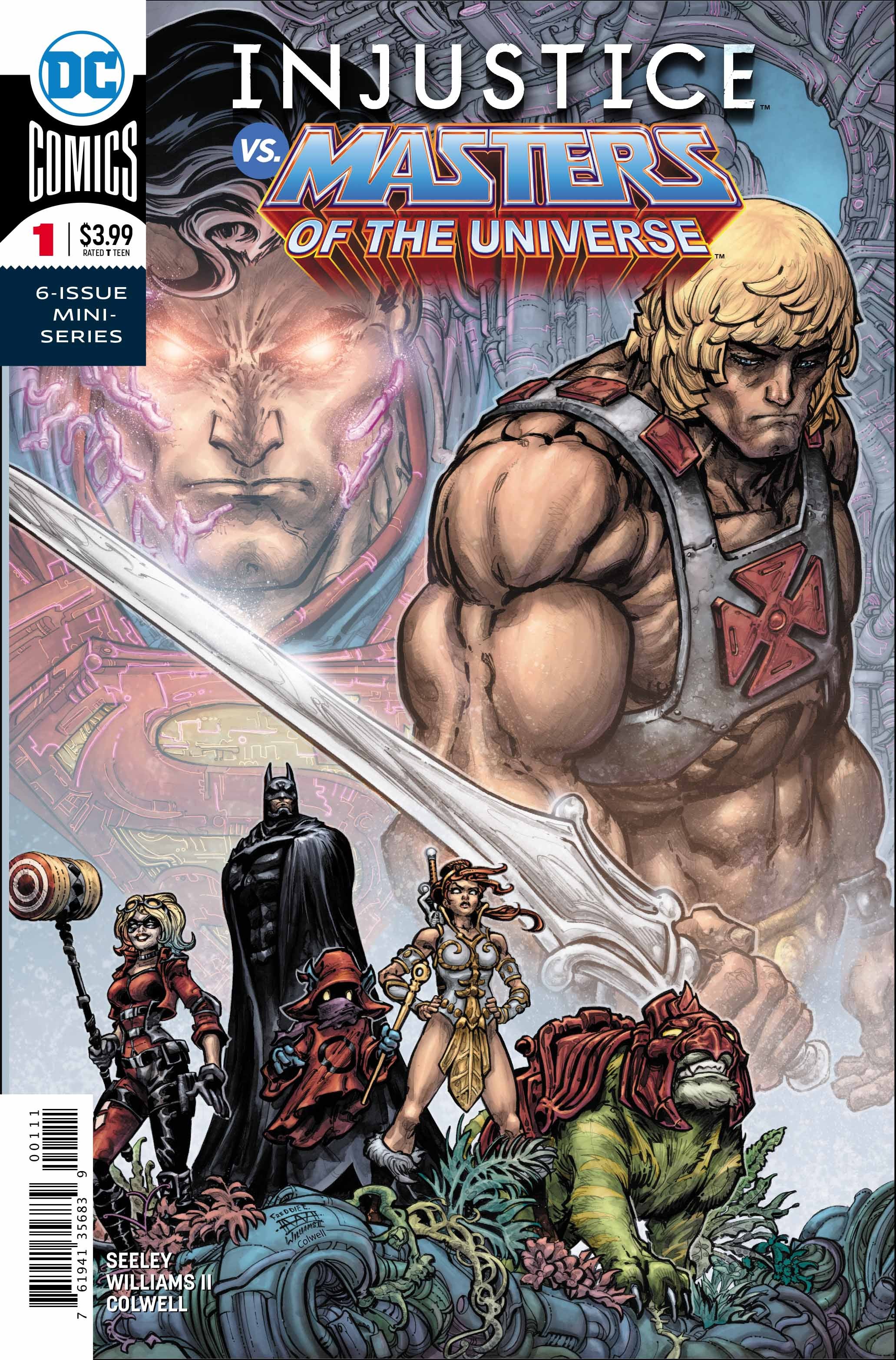 The cover for Injustice vs. The Masters of the Universe #1. (Image: Freddie Williams III, Jeremy Colwell, DC Comics)

I think the world was shallow, at least as presented in the cartoon. But, since we’re disagreeing, talk to me about the depth that you felt was there.

Williams: I just thought it was cool.

Seeley: What’s cool about Masters… what works about it, is that the toys are sort of almost blank slates, in a way. They’re just really iconic designs that the kid would interact with and create their own world.

I think one of the strongest points of Masters of the Universe was that you put yourself into it. You had unlimited canvas. You has laser guns and swords. You had a demon, skull-headed guy and you had a robot, as well. You had all these things you could slam together, and for me, it really opened up my imagination as a kid. And I think that’s the strength of it.

Since the original cartoon and all the stuff that’s been done for Masters of the Universe, the minicomics, and storybooks, Mattel has gone, “This thing really has some legs to it.” They went back and combined this super-immersive George R.R. Martin-level detail of the history of this world, so it now has as much story as you want it to.

Now you can ask how deep did you want to go? It’s there. And in this crossover, we get pretty deep. There’s a big canon and we can invoke the history of this world, but, I think the strength of it, despite all that, is the characters. It’s always been that the strength of He-Man is his relationship with Man-at-Arms and Teela and Orko; that is the heart of it.

Our job then is to go, “Man, isn’t this shit cool?” But it’s really about how good these characters are.

Freddie, you drew the Batman/Teenage Mutant Ninja Turtles series. Talk to me about visually reinterpreting the characters in a way that feels right, but also putting your own stylistic imprint on it and extrapolating how they have to look to fit into Gotham City.

Williams: I think that since the ‘89 Batman film came out and the ‘90 live-action Turtles film came out so close to each other, to me, the visual language of those is really compatible. You can probably make a fan edit where it looks like they work together.

So actually, I was looking at the original Eastman/Laird era of Ninja Turtles, and that fit together with Batman very well, visually. I’ve been asked that question quite a few times about was it hard to make it look like they fit together, and they click.

To me, they’re already in the same world. They just fit together right away. So, I got lucky and I’m now getting credit for what basically was always apparent to me. The dark grittiness and stuff made them feel really compatible.

Now you’re doing the same thing: “These characters have to look this way to fit into Eternia.”

Williams: I work in this ink brush style that has all these textures, a lot of rendering and stuff that, if I’m not careful, I could make something like Eternia, which is much brighter in general, or even some of the Masters of the Universe characters look a little too dark or grim. And that’s not appropriate. 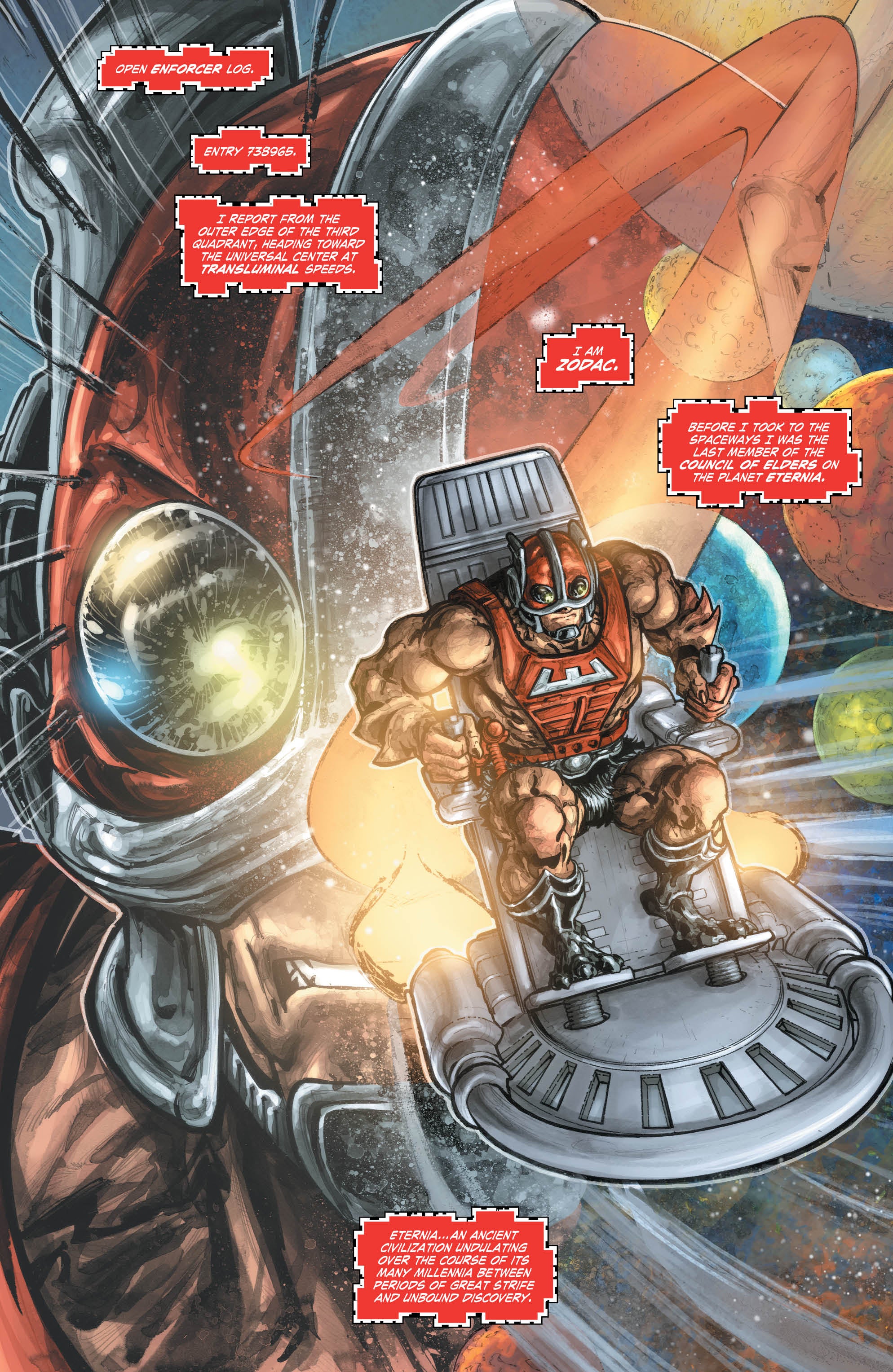 The ominous first page of Injustice vs. The Masters of the Universe #1. (Image: Freddie Williams III, Jeremy Colwell, DC Comics)

They create a much better contrast with the Injustice world, which is much darker. If I can keep the visual languages distinctive, the challenge is making them look OK standing side-by-side.

A big part of that is also the colourist Jeremy Colwell, who is, to me, the best colourist I’ve ever worked with. He has a great colour sensibility and he makes it work really well.

But for me, it’s just minding the amount of textures. Stuff like that. So I don’t go too heavy on the Masters characters. Unless it’s the villains. Then I keep the Injustice characters darker. A little more realistic.

Seeley: I mean, the continuity is a contained story… so it’s a little bit restrictive in that way, but you can also kill dudes in this. So, it’s its own universe and instead of a specific character, it’s about the whole DC universe.

We got to use anybody who shows up, you know, like, in our story we have Batman, Superman, Lobo, Grodd. We just do whatever. We have a scene where Superman breaks Lobo’s jaw. That’s a thing we wrote. I don’t know why, but we did. But we get all the toys to play with. All of them. 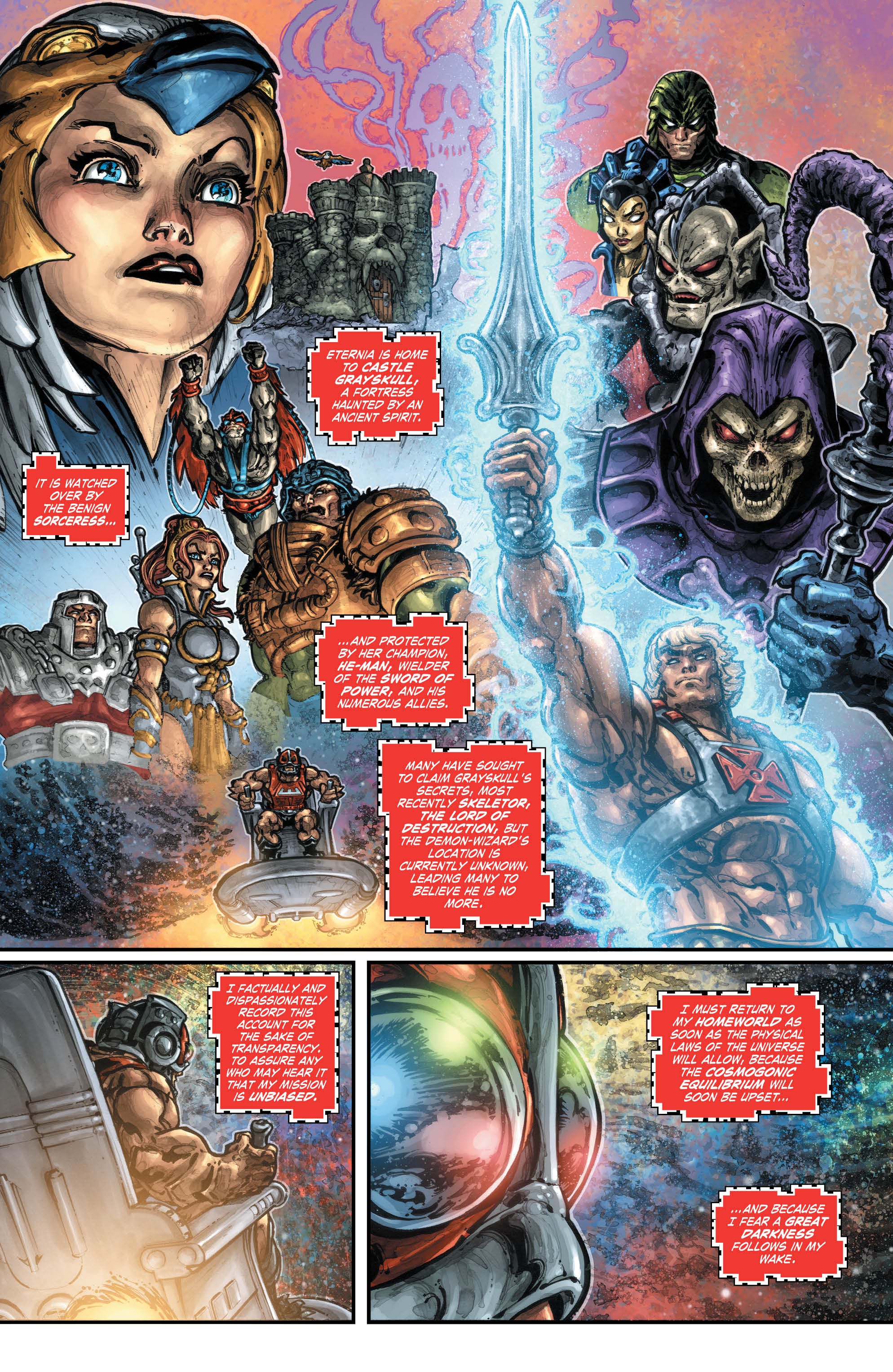 A quick rundown of Eternia’s status quo on page two of Injustice vs. The Masters of the Universe #1. (Image: Freddie Williams III, Jeremy Colwell, DC Comics)

Who did you end up falling in love with over the course of the series? Who surprised you?

Williams: Well, I fell in love with Tim. Is that what you mean? [laughs]

Some of the cameos Tim is taking from the continuity are like, “Oh yeah, I forgot about that guy.” Tim knows all of them, and is also providing all the reference for it. It’s easy for me to put all these characters in the background and look like a genius when he’s done all the research and knows who should be there.

It’s the immersiveness I’m personally enjoying the most. It’s cool drawing Harley Quinn and Teela sitting right next to each other, or Orko flying next to Batman’s head. And Batman’s kind of like, “I like this guy.” It’s great to do that kind of a mashup.

Seeley: For me, I loved them as kids and kind of forgot how great Stratos, Man-at-Arms, and the original batch of He-Man characters are. They’re perfect. They’re so cool.

I kind of re-fell in love with Man-at-Arms. He’s seen everything, and when a bunch of superheroes from Earth arrive and say, “We need to team up,” he’s like, “Yeah, all right.” This is just a fucking Monday for Man-at-Arms.

So I love him, so much. What actually ended up working really well, that surprised me, is Starfire. Because she gets sent to Eternia and she’s nailing it. Everything’s weird. Earth is weird to her, so. She’s a princess. She’s used to this sort of thing, and it’s easy for her to take control. She’s there, she’s got a job to do.

We kind of made a joke in there because there’s so many dudes in Masters of the Universe, there’s only one girl. There’s just Teela. So when Starfire shows up, they’re all like, “Oh my God.” They don’t know what to do with themselves. This beautiful woman with flaming hair shows up and they’re falling over themselves to talk to her, you know?

Issue one just came out and we saw Skeletor operating in the Injustice Universe. How much back-and-forth are we going to get between the two realms?

Seeley: A lot. Basically, it’s two stories. There’s an invasion on Eternia and He-Man is also sent to assassinate Superman in the Injustice universe. So, there are basically two separate stories that converge in issue four.

At first, I hated the Superman in the Injustice universe. I get that you’re supposed to. But how weird is it you get to write this kind of, like… 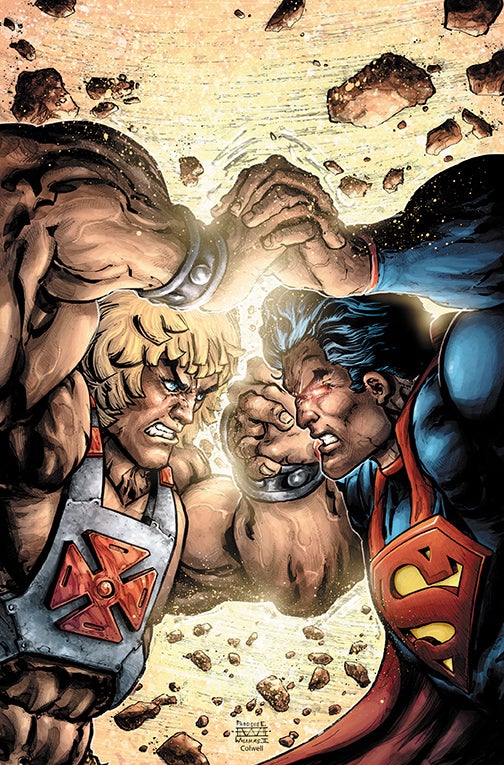 The full cover of Injustice vs. The Masters of the Universe #2. (Image: Freddie Williams III, Jeremy Colwell, DC Comics)

Seeley: I actually, it’s the hardest thing for me. In this thing, the hardest part is writing a Superman who is not the icon of virtue and the perfect superhero. I had to actually ask Tom [Taylor] for advice on it.

It took me until probably issue four to really understand, “Oh, I’m sympathetic to this Superman.” His life failed him in a way that it would never fail for the real Superman. This would never happen to our Superman. There’s a fault, inherently, in this Superman. We find out what that is in the story. Like, what causes him to be this way is actually kind of sympathetic.

Williams: Tim has done a great job of writing little moments where you get to see glimmers of a Superman that we all know and love. And Superman’s my favourite character. So drawing him, you know, dark and a little bit twisted is fun, but it’s even more fun for me to show those little glimmers of the Superman that we love, peeking through. Tim’s great at that. 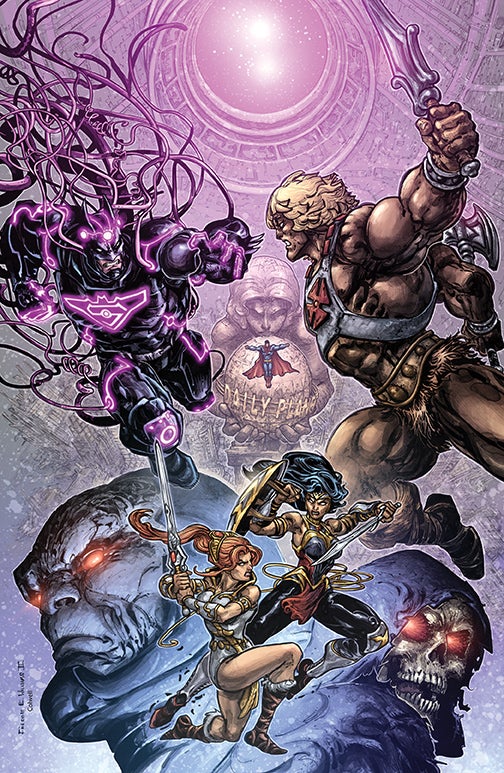 The cover for Injustice vs. The Masters of the Universe . (Image: Freddie Williams III, Jeremy Colwell, DC Comcs)

Seeley: You can also see that he wishes the world had gone the way that it did for the main Superman, he wishes that had been the case. He knows that that world exists, because people from that other universe come and try to kill him. So, he knows that’s a real thing.

But he’s dealing with this because he’s the guy that this happened to. And, to his mind, he’s doing the best he can. Which we can all relate to, you know? I personally don’t think Superman should feel that way.

I have a kid, you lose your temper sometimes and you feel terrible at having yelled at your kid or whatever. And this Superman is like, “Well, I fucked up once and something horrible happened to somebody I love. So I can’t ever, ever fuck up. Ever again.”

Seeley: It’s exactly that. And that’s what we use in this story. The story basically comes down to Superman getting the chance to fix everything. And then, the choice he makes tells you everything you need to know about this Superman. He’s given a change to fix it, and what does he do?