The Super-Fans Of Detroit: Become Human Hate Most Of The Game

Quantic Dream’s Detroit: Become Human doesn’t seem like the type of video game that would spawn an enthusiastic fandom on Tumblr. It’s a sci-fi game about robot civil rights that sometimes stumbles in its political commentary, and there’s nary a romance plot in sight.

Nevertheless, fans are writing fic, making art and finding virtues in a game that not everyone likes (Kotaku’s own Kirk Hamilton called the script “dopey”). Many of the most hardcore fans agree that the game has issues. They still want to make the characters kiss.

“Detroit is forcing me to do things I don’t want to so I’ve paused it in protest and am just sitting here,” I messaged the group chat on Sunday.

Detroit: Become Human is written and directed by David Cage, with additional writing by former TV writer Adam Williams. Cage’s writing and games have had an uneven reception. Though he’s ambitious and eager to tell engaging dramas with a Hollywood flourish, the results don’t always deliver.

Become Human takes place in a future Detroit where the use of humanoid androids has become commonplace; these beings are intelligent but treated as second-class citizens, and the game follows some of their attempts at rebellion. The story draws direct parallels to the US Civil Rights Movement ’50s and ’60s through the use of details such as the androids getting relegated to the back of a city bus.

Whether you think Become Human succeeds at its political commentary or not, the game seems to position its civil rights allegory as the key theme. Still, a growing die-hard pocket of Become Human fans doesn’t seem that interested in the game’s supposed message.

The game follows three interweaving storylines, each about a different android. One of them, an android detective in a buddy cop scenario with a curmudgeonly human, has struck a particular chord with the game’s burgeoning fandom.

Every media property that has fans has a fandom — that is to say, a community of fans who create their own subculture inspired by and revolving around the franchise they love. Only some fandoms grow big enough that they catch the attention of the world at large, and sometimes even the creators of the media property in question.

I’ve observed two different kinds of fandoms. There are fans that look at the things they like with a collector’s mindset, such as the fans who are dissatisfied with the Star Wars movie The Last Jedi. These “collectors” feel ownership over that property and want to control it.

The second kind of fandom that I have seen tends to approach the thing they like with an eye to expand upon that world. Detroit: Become Human seems to have attracted the latter kind of fandom, specifically because of the relationship between the android cop Connor and his human partner Hank. These fans don’t seem to want to control or change the original property; some of them don’t even like it.

Connor and Hank don’t have a romance in the game, but their dynamic screams “opposites attract”, and fanfiction writers have noticed. The push and pull of their differing opinions and temperaments all leads up to a story arc showing them learning to understand each other. Plus, one of them looks like a twink. 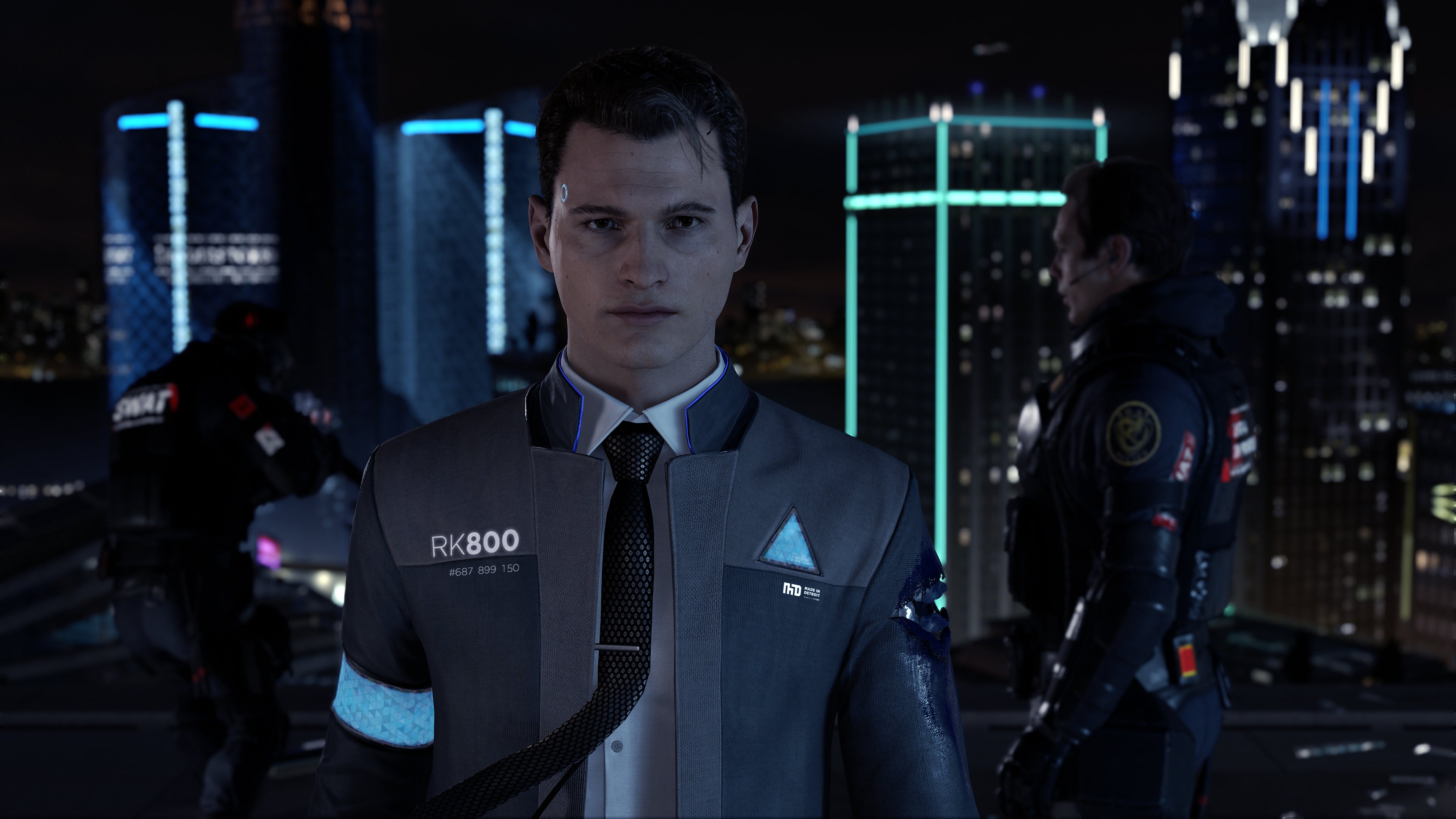 The Connor-obsessed subset of Become Human fans came under scrutiny from non-fans last month when a fan posted a photo of their tattoo of Connor’s serial number on their arm, seemingly unaware of the use of numbered arm tattoos during the Holocaust.

Become Human includes multiple endings that invoke Holocaust imagery and show the android characters living in camps, but ironically enough, the androids in the game don’t get arm tattoos like this one.

The unfortunate tattoo makes it seem as though Become Human’s fans ignore actual narratives of oppression in favour of shipping two cute guys in a video game that was supposed to be a commentary on oppression. But the Become Human fans reached by Kotaku seemed very aware of the game’s political themes. They just don’t think those parts of the game are very good.

“I genuinely think Connor’s arc could have — and should have — been its own separate game, because the quality of the writing and the absence of jaw-dropping racism sets it completely apart from the other two,” said one fan via email to Kotaku.

“I seriously believe Connor’s story is the only place that the narrative actually stuck the landing. Also the fan-artists pumping out entire tomes of Hank/Connor yaoi on the weekly are braver than the US Marines.”

“I’d like to start out this email by saying I’m an avid hater of David Cage,” another fan wrote. “As you probably already guessed, the Connor storyline within the game is what I like the most — the interactions between him and the other humans around him, especially Hank, are enjoyable.”

These fans seem to want to expand upon the text not because they think it’s good, but because they think it’s bad. By emphasising the small interactions they love in Become Human, these fans are adding more nuance to a game that they believe needs some. One fan said that a chunk of the Hank/Connor shippers were LGBT+ fans on Tumblr, where the ship seems to be most popular.

“The ship is attractive because of that chemistry, the dynamic given in the game’s ‘good’ story path, the depth of characterization we were given as a result of the acting, and the concept of an older man learning to love again because of his young, attractive, deviant android partner,” this fan wrote.

“This is why on [Archive of our Own, a fanfiction website], we get slow burn fics like Your Shipwreck Eyes (my personal favourite so far!) that spend their entire first chapter building off of one single post-game interaction between the two and use several thousand words to do it.”

The fan also cited “the great performances of Clancy Brown and Bryan Dechart” as a draw for many people, going on to claim that “nearly everything good about their acting was put in the game against David Cage’s desires… it’s clear that even the ‘good parts’ of D:BH had little to do with the man.”

Bryan Dechart described that push and pull with director David Cage in a livestream, excerpts of which have been posted on Tumblr: “The wink was totally improv, and even David Cage wasn’t so sure about it, but I had to convince him that it was allowed. So, I’m really glad you guys like the wink.

“Hank punching me across the face was also improv. Me and Clancy had a lot of fun. If there’s any time I got to improv in this game, it was with Clancy, and it was because we slowly started going deviant. And David Cage was like, ‘No, don’t do that!’ And we’re like, ‘We’re gonna do it.’”

Dechart seemed to know what his fans wanted to see, leaning in to the camera to deliver his theatrical wink once again. He’s a Twitch streamer, too, and he interacts with the fans frequently and boosts their fanart. 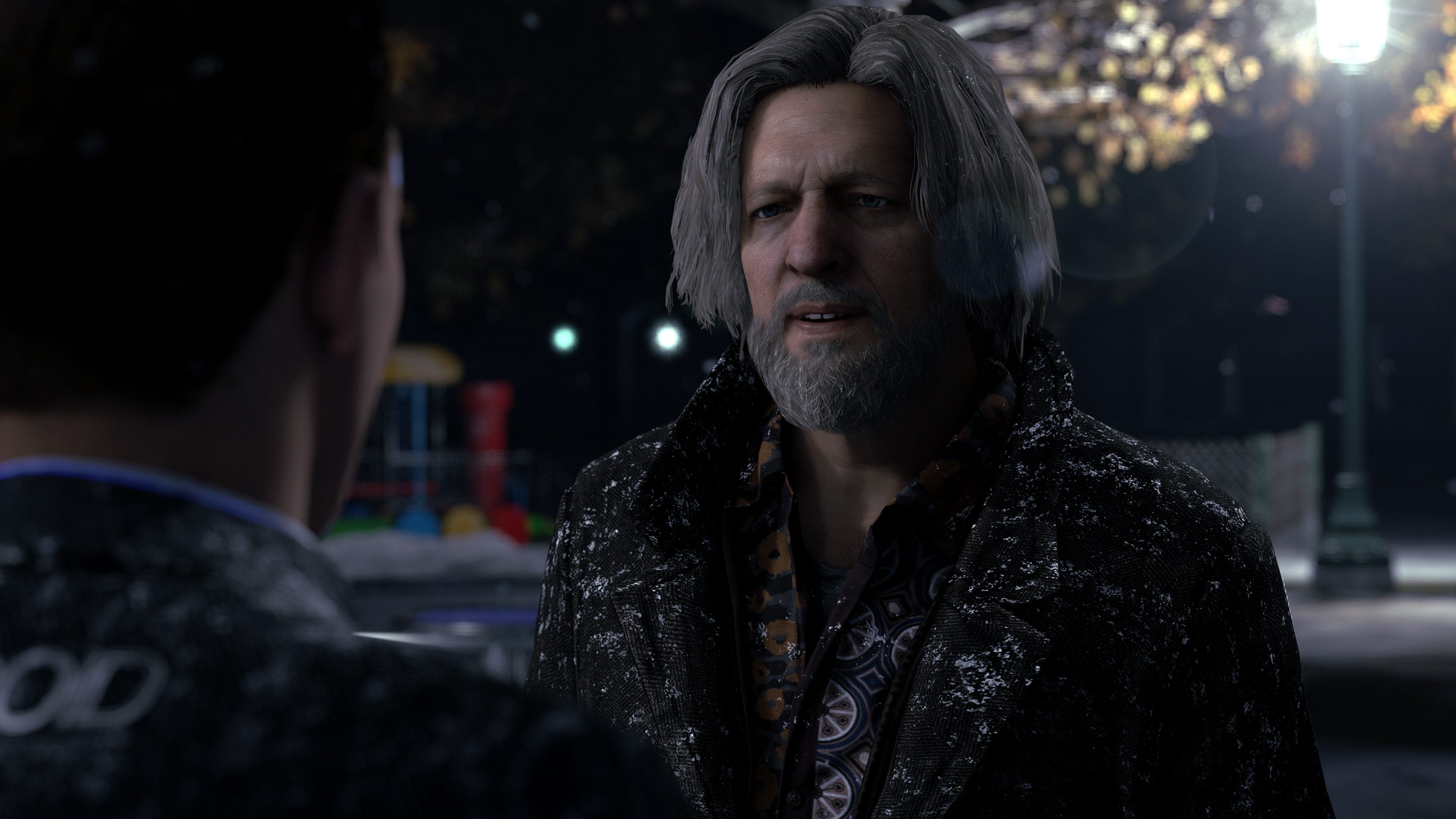 If this were any other media property, Dechart might face accusations of “queerbaiting” — or, playing up the possibility of a queer romance without ever delivering. But in this situation, Become Human fans doesn’t seem to expect anything from David Cage or Quantic Dream, nor do they even seem to trust them.

Most of the fans I spoke to admitted that the only thing keeping them interested in Become Human fandom was a romance that isn’t even present in the game, and some of them were actively hostile to David Cage and the rest of the game.

These fans seem used to eating around the rotten part of a piece of media, seeking out the good where they can. They add their own ingredients, crafting a dish that improves upon the best of Become Human while omitting its unsavoury storylines. The result is quite appetising, even to fans who wouldn’t otherwise be interested in Become Human.

“Detroit: Become Human was the kind of thing that I knew was awful, but only got more awful the more I found out about it,” wrote one fan. “Unbelievably, incredibly, impossibly awful. But my friends kept retweeting hankcon/conhank, and after a while I realised that through exposure alone, I was becoming obsessed.”

If Cage and Quantic Dreams knew what was good for them, they’d thank these fans for the free advertising. Unfortunately for them, this fandom doesn’t seem to care about Cage at all.