The Two No Man’s Skys

featurehello gamesno mans sky
To sign up for our daily newsletter covering the latest news, features and reviews, head HERE. For a running feed of all our stories, follow us on Twitter HERE. Or you can bookmark the Kotaku Australia homepage to visit whenever you need a news fix.

For two years, No Man’s Sky has been one of gaming’s great Rorschach tests. View it one way, and it’s a beautiful adventure through an endlessly fascinating parallel universe. Tilt your head, and it’s a janky hunk of junk built on a bed of LIES.

That’s been the case since I reviewed the game in 2016, when I wound up playing through it twice in order to properly evaluate it. First, I played as I thought I was meant to, skipping from solar system to solar system in pursuit of an ultimately meaningless endpoint.

The second time around, I stayed put and embraced it for what it was: an offbeat, a max chill explore-a-thon about blowing up rocks and tweeting screenshots of aliens. I liked it a lot more. In the process of writing my review and in the months that followed it, I’ve never stopped trying to reconcile those two conflicting viewpoints.

And while I’ve always had a lingering fondness for No Man’s Sky’s spacefaring vibe and play-doh planets, I’ve never stopped struggling to pin down how I felt, and feel, about it.

After two years and a pair of massive overhauls from developer Hello Games, getting No Man’s Sky properly into focus still requires viewing it as two things at once. It is both a frustrating hodgepodge and an incredible comeback story, an enticing adventure and a bug-riddled mess. For all that’s changed about it in the last two years, that duality has remained.

Last week Hello Games released the long-awaited “Next” update, which expands and refines the core game experience until at it is, at times, almost unrecognisable.

Building on 2017’s“see one another but the other person is just a floating orb” multiplayer. Actual, our-characters-are-standing-in-the-same-place multiplayer. 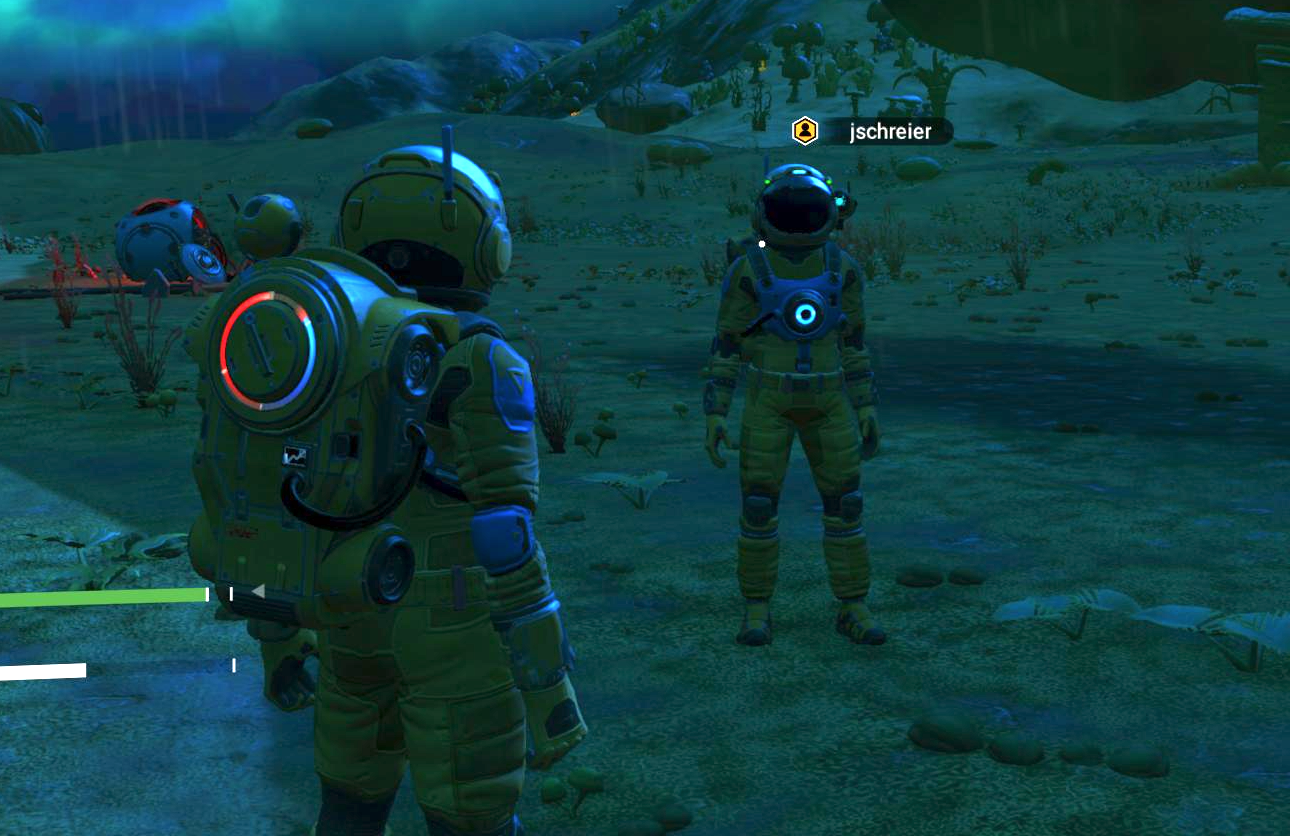 With the addition of true multiplayer—as well as dramatically improved visuals, planet diversity, starships that are actually fun to fly, and procedurally generated aliens that are goofy looking but also occasionally awe-inspiring—No Man’s Sky has drawn unexpectedly close to becoming, at least on paper, the game many dreamed it would be when they watched those first, majestic advertisements.

The checklist of things that were hyped in pre-release trailers and interviews but missing from the game has shortened considerably.

I started playing the Next update over the weekend, and quickly fell under its spell. Within 30 minutes I was back in that familiar, mellow headspace this game encourages, casually cruising from planet to planet, feeling overwhelmed by the sheer volume of changes and improvements.

As my colleague Gita Jackson put it last week, “playing No Man’s Sky after the latest big update is like landing on completely foreign terrain.” It was, for the most part, a wonderful way to spend a weekend.

My first hour or two were spent wandering and getting my head around all the new systems and features. Oh look over here, I’d think. They changed this, too? And this.

And this! It wasn’t until I tried to actually do something—in this case, continue work on the base I had started before the update—that I started to notice problems. The base-building questline was bugged, and I was unable to find a suitable base relocation site despite the game assuring me one was in my current system. The bug (now-patched) also caused the game to make an awful scratching static sound whenever I had the base quest active in my quest log, a glitch that I initially thought was tied to my save game.

I reloaded an old save and spent an unfortunate number of hours Googling how to recover my old base, which involved picking over space station public spaces in search of navigational data (long story), before ultimately giving up and starting over. 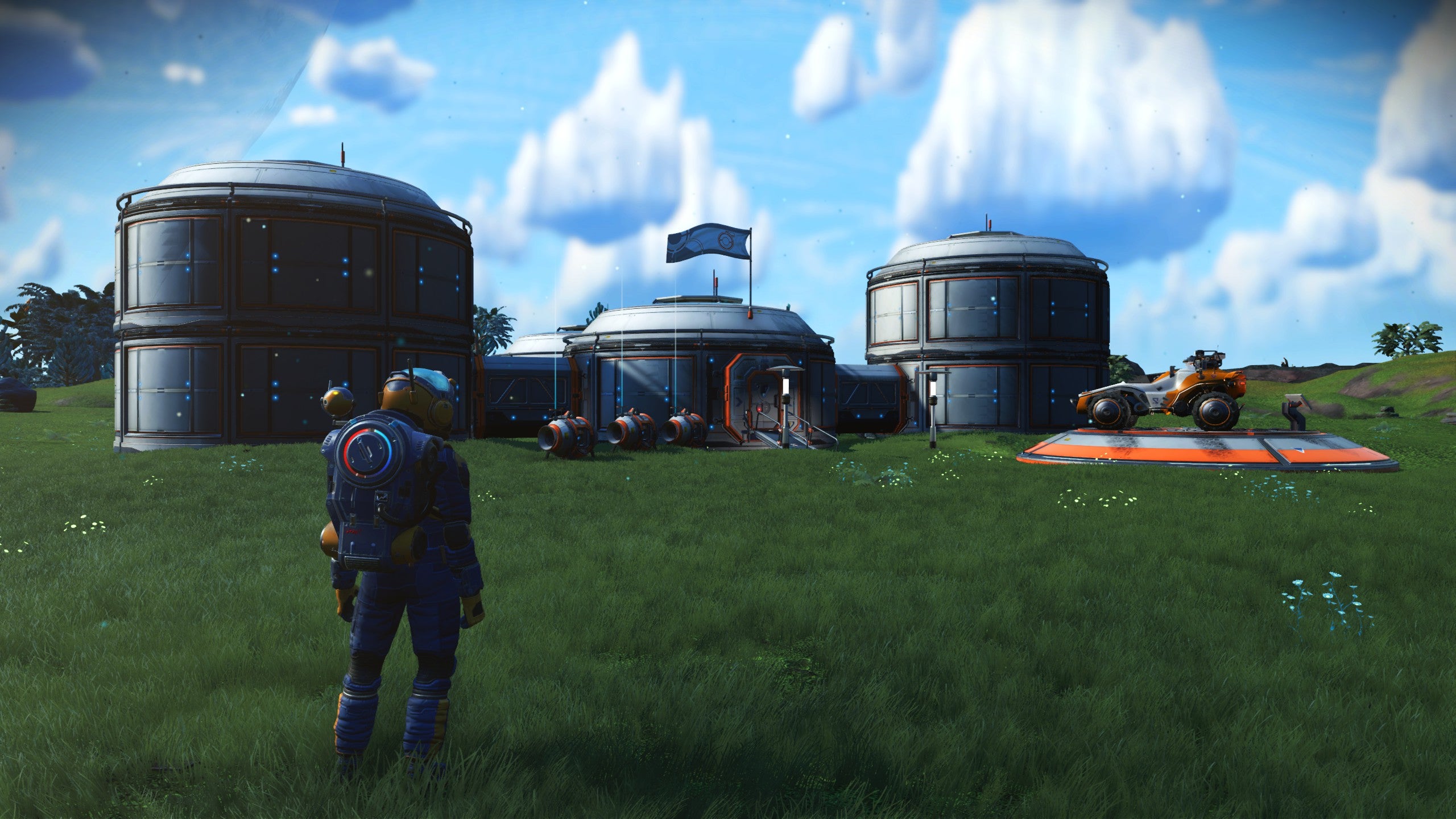 My subsequent hours were similarly spent bouncing between awe and annoyance. I’d land on a beautiful planet, then find myself grumbling at the still-cumbersome inventory and crafting interfaces. I’d marvel at a gorgeous new vista, then have the game crash as I tried to tweak my PC graphics settings.

I’d accept a new quest, only to have it bug out and seemingly erase my progress halfway through. I’d set out for a new and exciting destination, but when it came time to take off, the game would come to a screeching halt until I farmed up enough materials to refuel my launch thrusters. (I swear I had just refueled a couple minutes back… and how come I kept running out of ferrite dust…?)

Time and again my delight at this latest chapter in No Man’s Sky’s redemption story was undercut by lingering technical issues. Yet soon enough I’d be back in the air, marveling at the view while soaring toward my next port of call.

Among the game’s many fans, response to the Next update has been enthusiastic. My Twitter feed has been alight with screenshots, stories, and raves. The No Man’s Sky subreddit has been a blissed out collection of gorgeous screenshots, entertaining tales of adventure, and marvelling praise for the developers. Yet below the refreshingly happy surface there lingers a slight but bitter aftertaste, like a Diet Coke chugged on a cold summer day.

In the comments under a recent tips video I watched, I found an exchange that could stand in for any of a dozen similar disagreements I’ve seen across the internet.

“Can’t believe how many people are still blindly throwing hate at the game,” wrote one commenter, unbidden.

“You missed the 50 dollar plus price tag for what was essentially an ornate screen saver vs. the PROMISES they gave?” came the reply. “Right – das some BLIND-ARSE-HATE goin on there lol﻿.”

Additional viewers chimed in below that initial exchange. The hate was justified, said one, calling back to “the dark days of 2016.” “People are screeching the same complaints from 2016 at [the game] now without actually knowing what has been changed,﻿” fired back the original commenter.

From there the thread devolved in the usual way: responses and counter-responses growing ever longer-winded and more personal, culminating with one person calling the other one “objectively wrong.”

Near the bottom of the thread, a new commenter weighed in, accurately summing up how a lot of players seem to feel: “Sure, I was upset about it at first. But now its a great game, maybe even the game that was originally promised. And I’m enjoying it a lot.﻿” 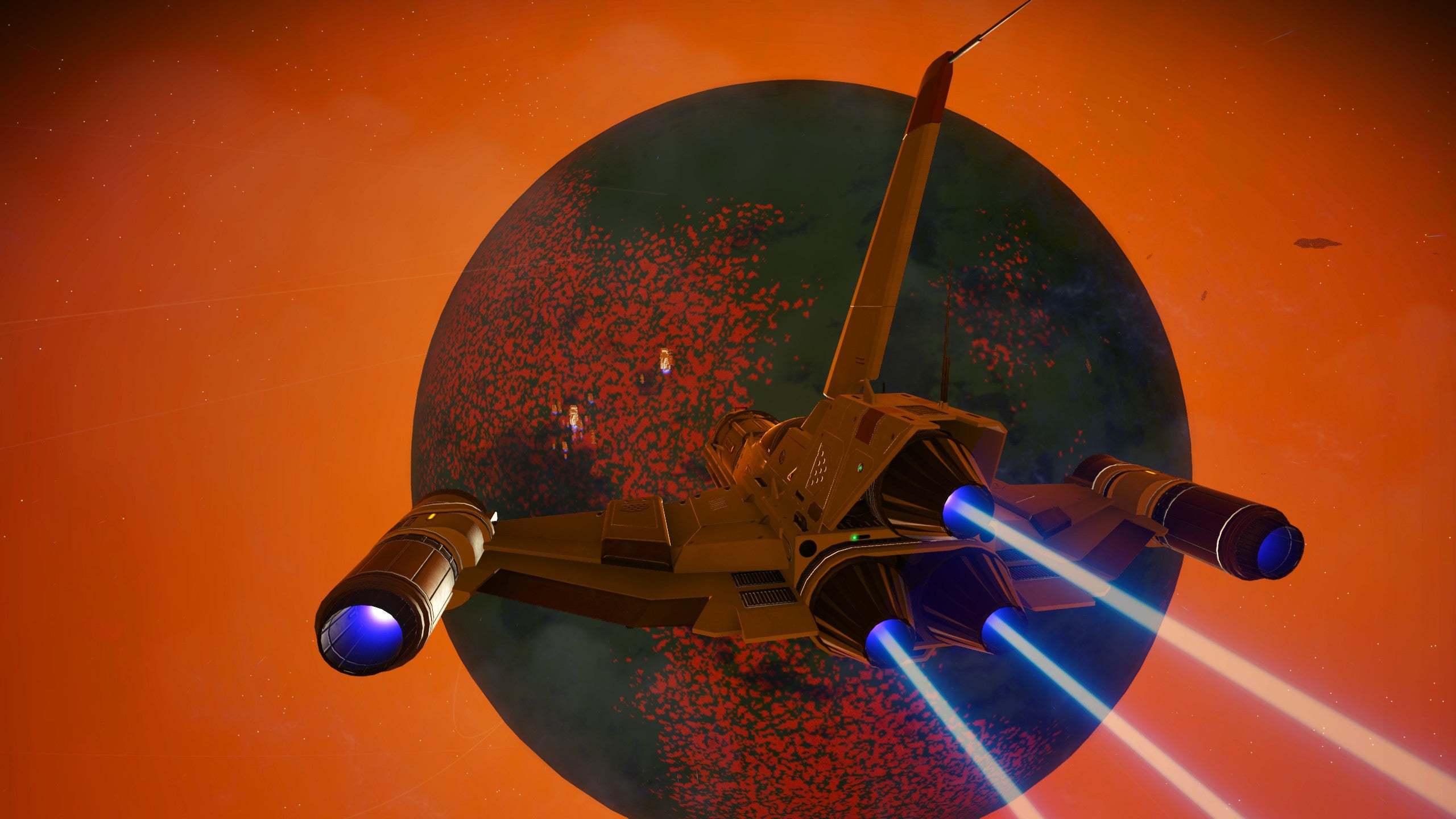 No Man’s Sky will likely always inspire some measure of conflict. It was an unusually sharp fracture between video game marketing and video game reality, and the sound of the break was loud enough to hear out in the waiting room.

I get the sense, reading recent interviews with Hello Games managing director Sean Murray and parsing his cautiously vague acknowledgement of unenumerated mistakes, that he and his colleagues are well aware of what went wrong and have opted to focus on making the game better, rather than relitigating their past mistakes in public.

“We can just focus on making games!” Murray told Waypoint in an interview published ahead of the Next launch.

“That’s the thing that we’re arguably good at here, right? Just a handful of us have made this really big, ambitious, innovative, weird game. We should just do that.” As the Atlas Rising and Next updates show, that decision to focus on work over words has already borne fruit.

Words were what got them into a mess to begin with; work has been what’s carried them out.

Over the months and years to come, No Man’s Sky will no doubt continue the process of becoming the game that so many hoped it would be in 2016. In some respects, it will only ever remain in process, because that game can never exist.

It was a figment of our collective imagination, informed by interviews and trailers, drawn out and refined over years’ worth of collective dreaming and speculating. Each update, patch, and bug fix will only draw it a little bit closer.

Among fans, that ever-brighter glow will continue to chase away the lingering shadows, eventually lighting the way for new dreams of what may yet come. For now, No Man’s Sky remains inexorably tied to its legacy, somewhere in the space between the game that was, the game that is, and the game that may never be.