Fans of Telltale’s The Walking Dead have watched protagonist Clementine grow from a small child into a confident teenager. The final instalment in the series, The Final Season, thrusts Clem into new responsibilities and focuses on building a small community in the midst of the zombie apocalypse.

The Final Season’s first episode, “Done Running”, takes place a handful of years after A New Frontier. Clementine, now a teenager, is raising AJ and training him to survive in the post-apocalyptic world.

We first saw AJ as a newborn child in Season Two; now he occupies the role that Clementine filled in the original season. Much like how Lee Everett needed to guide her, now she needs to guide AJ.

This means that many of the choices you make affect how he reacts to the world around him. If you warn him to save the last bullet in his gun for himself, he might not fire as many rounds in action scenes.

At the start of the first episode, the pair is rescued after a scavenging trip gone awry. They wake in the ruins of the Erickson Academy, which has been taken over by a group of children looking to survive.

Most of the first episode focuses on establishing relationships with the different characters — the bold leader Marlon, the quiet child Tennessee, the surly loner Violet — and figuring out where Clem and AJ fit into Erickson’s society. It’s clear that The Final Season really wants to focus on this community, allowing the player to decorate their room, participate in hunting, and know exactly when relationship dynamics change.

Last year’s A New Frontier had a large scope, flashing back to pre-zombie life and building intricate romantic triangles. It initially worked, but the scale eventually distracted from the story.

The decision so far to focus on Erickson, and to limit the number of action setpieces, allows The Final Season to set itself up for a deeper exploration of what it means to be a community. Time will tell if the season chooses to go that way, but the set-up is intriguing. Especially once Erickson’s darker secrets come to light. 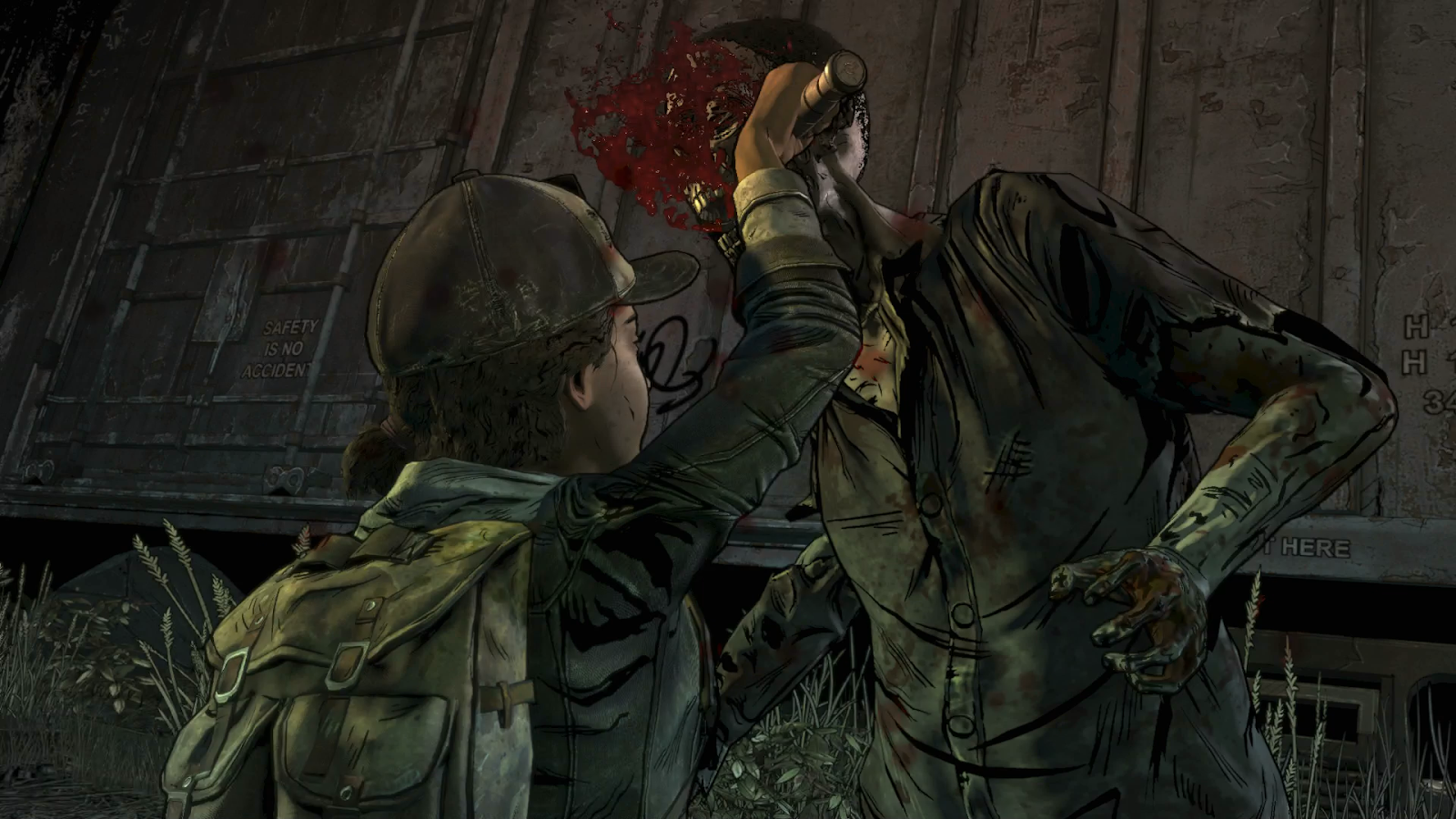 Telltale’s also taken steps to improve exploration and combat this time around. Players have free control over the camera and can walk around every inch of the game world. Hidden collectables encourage players to really take in the environment. Backgrounds are given a distinctly rough visual flair, filled in with sketch lines and harsh colours that feel like exploring a comic book page.

Combat isn’t limited to quick time events, although there are some. Instead, many sequences involve a revamped combat system where you need to position yourself and either stun or kill zombies. If you let them group up, it can lead to disaster. It isn’t too detailed, but it’s more tactical than what the series has offered to date. 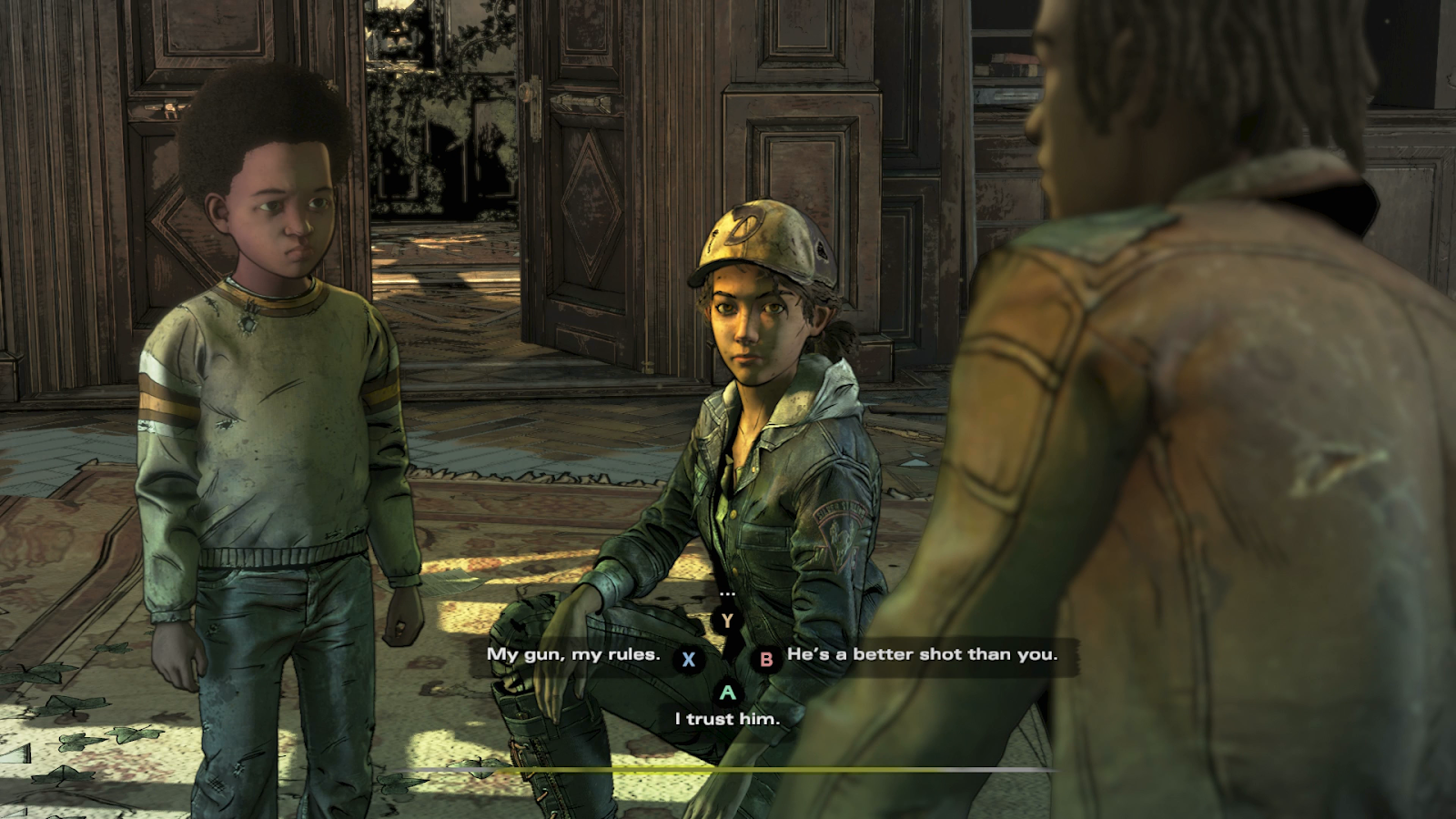 If this episode has a weakness, it comes near the end. Most of the major developments are left towards the end of the episode, and the resulting conflict feels forced. I’m not going to spoil the plot twist in detail, but it feels very sudden.

The sequence itself was very well done: A tense confrontation in the rain challenged my relationship status with numerous characters, and the voice actors sold every moment. One of The Walking Dead’s main theses is that nothing gold can stay. If it’s too good to be true, that’s because it is. Yet, as the final sequence played out, I couldn’t help but feel shoehorned into the conflict.

In spite of the railroading, this first episode has me intrigued. The focus on Clementine and AJ’s relationship, as well as the Erickson community, teases a more intimate and personal story than A New Frontier. Maybe it ends, as Season One did, in tragedy. Maybe Clementine can find a way to survive. I hope the rest of the season can turn inward and reflect as much as this first episode.