Two AA batteries. That’s all I recently needed to turn my Xbox One controller on and get back to steaming dumplings in Overcooked 2. It was around 1:00 a.m. on a Saturday, though, and I didn’t have any left.

I found an Energizer box crammed upside down in a coffee table drawer. It was empty. As someone who constantly fails to throw out mostly empty cereal and ice cream containers that then dash the hopes of other unsuspecting people, my empty battery box could have been karma. Or it was my own laziness, or both. The universe works in mysterious ways, which is why I shoved the empty Energizer box back in the drawer once again, rather than throwing it out.

A lesser Overcooked chef might have gone to sleep at this point and dealt with the situation in the morning, but I was determined to finish steaming those dumplings.

Could I go out and buy batteries? All the drug stores near me closed at or before midnight. The 24/7 supermarket was only a 10-minute car drive away, but I’d already already pushed deep into my 2006 Rav4’s generous gaslight zone earlier in the day. So I racked my brain trying to think of where else batteries might be hiding in my house.

I scavenged through kitchen drawers, desk drawers, and nightstand drawers, only to find a random assortment of crap: a solar-powered maglight, old Yankee candles, a Samus Smash Amiibo I bought on an impulse to use with Metroid: Samus Returns but never did.

When I was a kid, my parents’ house always seemed to be hiding batteries in drawers. Entire colonies of Duracell, Energizer, and cheap, short-lived off-brands mingled with boxes of match sticks and the occasional Hotwheels car.

Most of them only ever had a little juice left, or were in the process of being thrown out, so selecting between them to power a Game Boy for an important Pokémon trade was a game unto itself, not unlike the scene from Indiana Jones where the Holy Grail sits hidden among a sea of opulent but useless decoys. 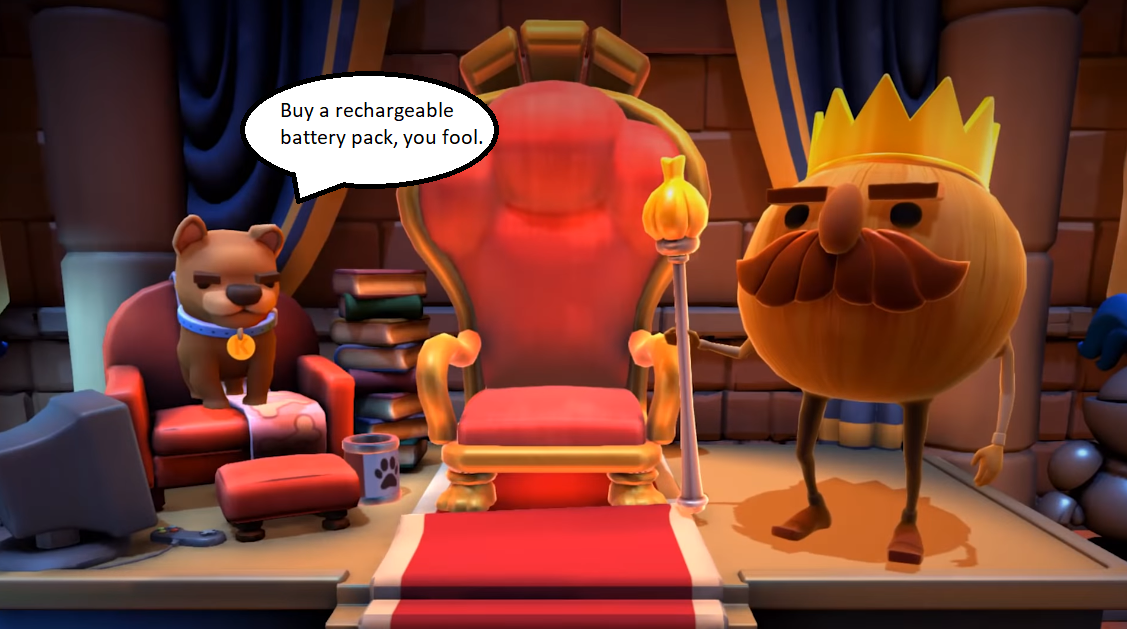 Kevin does not approve of my dependence on AA batteries. (Screenshot: Kotaku, Overcooked 2)

My house, I feared that night, doesn’t contain batteries. The manufacturers of just about every device I own stopped using them years ago. My handhelds dating back to the Game Boy SP are all powered by rechargeable internal batteries. I have two generations of DualShock controllers that recharge out of the box.

Only my Xbox One controller came brand new with a spare set of AAs, that…and the remote for the cable box Verizon sent me when I moved. And thank god for that.

After checking everywhere else that night, I finally sat back down on my couch only to realise my saviour was right in front of me. I grabbed that cable remote and opened up its hatch.

I removed the batteries, put them into my Xbox controller and got back to the game. The next day, when I woke up and wanted to watch Premier League on NBC Sports, I swapped them back. When it was halftime and I wanted to play Overcooked 2 again I swapped once more. This is no way to live, and yet it’s how I live.

The Elite controller was revealed back in 2015. It’s still sold with AA batteries. At Gamescom this week in Germany, Microsoft unveiled a new, special edition PUBG Xbox One controller with custom trigger grips to help console players maximise their reaction time and accuracy in the second most popular shooter in the world right now. It also comes with AA batteries.

As The Verge’s Megan Farokhmanesh pointed out last week, there exists a cadre of diehard Xbox fans who actually like that Microsoft hasn’t upgraded.

They say things like “nothing is more annoying than having to charge your controller mid game,” and “Options and flexibility is better than having a weak arse battery inside a controller.” Microsoft used the option line itself in a statement to The Verge on the topic, noting that players are free to do whichever they prefer, although as Farokhmanesh points out, even Microsoft says on its website that AA batteries can lead to a suboptimal experience.

During and after this year’s E3, executives and developers began talking about how the future of gaming is streaming.

Fans have begun speculating about the next generation of consoles and the features they’d like to see in them, things like backwards compatibility, better internet browsers, and much, much larger hard drives.

My request is very simple: no more disposable batteries.