Webcomics aren’t a novelty. Nor are they this up-and-coming thing I “have to tell you about.” They are part of the cultural pantheon, the nerdy landscape—launching successful careers, conventions, and memes that have adorned everything from t-shirts to energy drinks. But sometimes, even when a comics genre is known, it’s great to pull it out of the pile and discuss what makes it special. In this case, slice-of-life comics.

Slice-of-life serials are sort of like the hot chocolate of webcomics. They’re warm and comforting, always there when you need them. Even when they’re tackling challenging stories about things like systemic racism or transphobia, they do it in a way that helps you connect, empathise, and feel. Slice-of-life webcomics forego superheroes and wizards in favour of baristas and office managers, revealing how our everyday lives are more adventurous than we might think.

“There is excitement day-to-day, and it’s the little things that readers can relate to. Whether it’s just finding a great restaurant to eat at and share with friends, that’s an event for some people. For some, that’s like their week,” Validation writer Christian Beranek told io9. “You can have escapism in things you can do every single day, achieving little goals here and there.”

Validation, a semi-weekly comic that’s been running since 2013, tells the story of a 20-something trans woman named Ally as she’s gone from a shy comics fan to actually being a part of the industry, growing as a character and person. It’s not uncommon for some webcomics to keep their characters ageless. For example, Dumbing of Age’s characters have stayed college freshmen for the entire run.

However, others are more like everyday life. Their characters age as the creators do. In addition to Validation, there’s Tripping Over You, a webcomic centered around the relationship between Milo and Liam. The characters started out as high school friends back when the series started in 2011. Now, they’re living together. 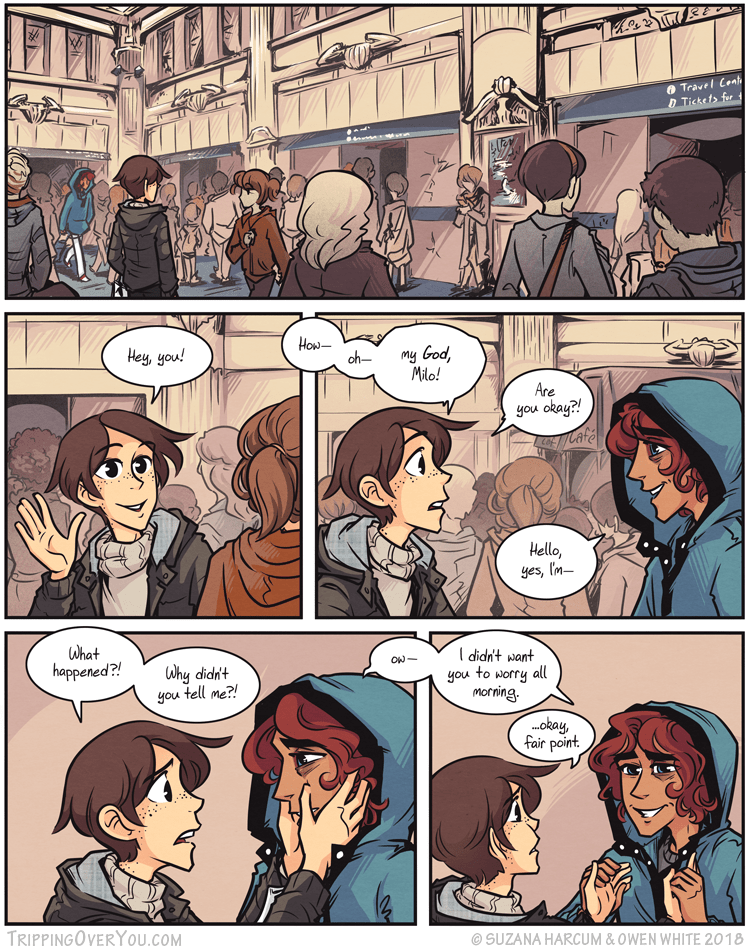 Interestingly, Milo and Liam’s relationship syncs up with the creators’ themselves. Writer Owen White said she and her now-wife, artist Suzane Harcum, came up with the characters back in high school, sharing doodles and quips back and forth.

It’s hard to say whether the will-they-won’t-they aspect of Milo and Liam’s relationship was a (conscious or subconscious) self-insertion for the creators’ unspoken love, or whether those characters’ budding feelings simply helped them recognise their own. But White told me Liam and Milo did help bring her and Harcum together.

“These characters were a reason, a little bit the reason why we were like, ‘Is this real? It’s real for me, is it real for you? Oh it is!’” White added.

That’s the impact slice-of-life webcomics can have—not just for the creators, but for their fans. Beranek explained she used to publish books for Jennie Breeden’s webcomic The Devil’s Panties, and talked about the scores of fans who would visit Breeden every time she made an appearance at a comic convention. The Devil’s Panties, which is largely autobiographical, had a way of helping people feel connected to the character as she went through normal life stuff.

In a similar vein, White said Tripping Over You has readers all over the world, who often engage with the two of them on livestreams, online chat rooms, and social media platforms. Because people feel close to their favourite characters, that ends up spreading to the creators themselves.

It’s not surprising when you think about the fact that webcomics came into popularity alongside online diaries, forums, and early blogging, which paved the way for YouTube and other social media platforms.

The medium grew in a time when people were eager to connect with others using the internet, and so personal stories like the ones in these comics became an outlet for self-expression and interpersonal connection. However, the roots of slice-of-life webcomics can also be traced back much further.

For over a century now, many popular newspaper comics, also known as the “funny pages,” have focused on everyday life—the ones that weren’t about cats who hated Mondays, anyway. From the growing pains of Peanuts to Family Circus’ sometimes horrific life decisions, all the way down to Doonesbury’s political commentary and Beetle Bailey’s wartime escapades (we don’t talk about Dilbert). I’ve literally got a collection of Zits comics sitting on my desk right now, one of the first slice-of-life comics I started reading as a kid.

“I think it’s definitely within the same sphere,” Beranek said. “I was with my parents on a trip to see my brother from Richmond, and they got the Richmond paper up there. They still had, on the funnies section, a huge section of comics. I was looking through them. I was like, ‘These are the first webcomics.’”

Of course, there are some major differences between newspaper comics and webcomics, mainly in terms of the subject material. Newspaper comics have occasionally garnered controversy for publishing about so-called “taboo subjects,” but typically stay within safer boundaries.

Some of the most controversial things we’ve seen include Peanuts creator Charles Schultz once threatening to quit when publishers wanted him to not have Franklin (the series’ first black character) sit in the same row of school desks as white students. Also, in 1993, there was a national outcry with 19 newspapers cancelling For Better or Worse after it created a storyline where a prominent character came out as gay.

Webcomics, on the other hand, don’t have to follow those kinds of internal or external restrictions, since they’re largely self-published. This paves the way for better representation and more unique stories. In addition to Tripping Over You and Validation, there are webcomics like Rain, about a trans woman “attempting to go through her senior year in high school identified only as a woman,” and Questionable Content, which features a wide variety of characters and representation. White said slice-of-life webcomics have been especially important for the LGBTQ+ community, as it’s given queer-identifying folks a sense of community and understanding.

“It tells you you’re not alone. You’re not suffering alone, you’re not anxious or scared alone. There are definitely people out there that understand you,” White said. “It’s partially that feeling of community that internet culture brings with it.”

That doesn’t mean the genre is flawless. There are some issues that go alongside creating webcomics, even ones that avoid sci-fi or fantasy like slice-of-life serials. The webcomics format isn’t well suited for printing into traditional graphic novels, meaning it’s harder to get them sold in stores, and it’s not always easy to monetise the work when it’s put online for free.

Plus, there’s the very real risk of fatigue—something some YouTubers have also been discussing on their platform. Many webcomics publish at least once per week, with select titles coming out daily to keep people’s interest. Beranek said webcomics creators usually try to create a “buffer,” or backlog of issues so they can stay ahead of unforeseen events. But if something happens like an illness or injury, that backlog can diminish quickly.

There are some ways these issues are being addressed—Patreon has become an important monetary tool for creators, and Kickstarter helps them get funds for special projects. And these fans are eager to help out their favourite creators—Breeden’s latest Kickstarter for The Devil’s Panties’ tenth volume met its initial fundraising goal in less than a week.

Because, in the end, it’s all about the fans enjoying something they love. A story about some beloved characters that may feel small, but that doesn’t make it any less special or meaningful. It’s not the whole planet. It’s just a slice.