cartoonsdreamworksdreamworks animationinterviewjoaquim dos santoslauren montgomerylgbtqnetflixstreamingvoltronvoltron: legendary defender
To sign up for our daily newsletter covering the latest news, features and reviews, head HERE. For a running feed of all our stories, follow us on Twitter HERE. Or you can bookmark the Kotaku Australia homepage to visit whenever you need a news fix.

Even if you weren’t there in the San Diego Comic-Con hall where it was first announced that Voltron: Legendary Defender’s Shiro is a gay man whose relationship would be explored in the show’s seventh season, fans made sure the world knew.

For many, the announcement was a significant moment of validation for a sizable portion of Voltron’s fandom that’s been advocating for queer representation on the show. Rather than delving into a plot about two of Voltron’s Paladins falling in love with one another the way some hoped, the series introduces Adam, Shiro’s long-term partner who lives back on Earth.

In the days leading up to the season premiere, there was an understandable excitement within the fandom, given that Netflix and Dreamworks were rather tight-lipped about the upcoming character arcs. Finally, people had the chance to dive back into the show. But as everyone eventually finished the season, there were questions and confusion.

I recently spoke with Voltron’s co-showrunners Joaquim Dos Santos and Lauren Montgomery about how the show approaches Adam and Shiro’s relationship, and they explained how they really want the fans to understand the story they’re trying to tell. 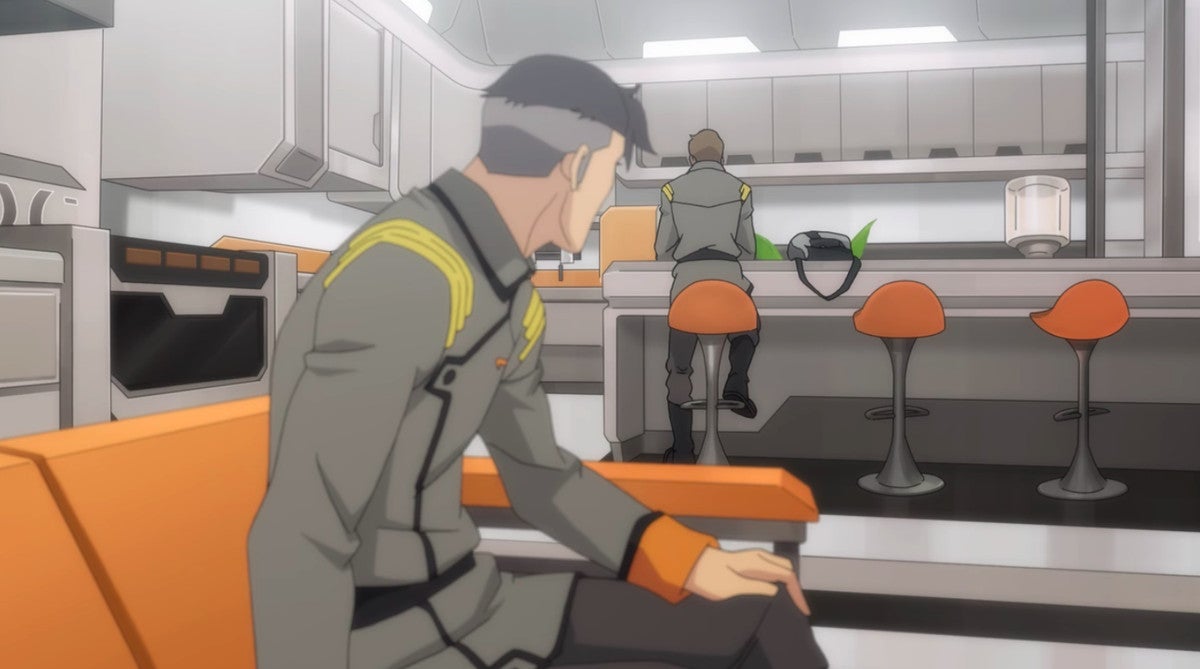 Adam only appears in two of Voltron’s episodes. Even though both scenes are incredibly significant and crucial moments that define Shiro, they can also be seen as an unfortunate instance of a show introducing a queer character only to immediately kill them, a narrative phenomenon referred to as “Bury(ing) Your Gays”.

In the season’s first episode, “A Little Adventure”, there are flashbacks to Keith and Shiro’s pasts on Earth, where we meet Adam and learn more about the degenerative disease threatening Shiro’s life.

Though Shiro’s a first-rate pilot and the logical pick to join the upcoming Kerberos mission, his disease would progress much too far in the three years it would take for him to make it to his destination. Shiro, ever the soldier, is willing to make that sacrifice. That decision is something that devastates Adam when Shiro breaks the news to him.

Even though the pair are never explicitly referred to as being romantically involved, the fight they have over Shiro’s deployment definitely reads like a fight between two men who once loved each other, but have grown apart after countless similar fights. Adam gives Shiro the classic “if you go, don’t expect me to be here when you get back” ultimatum, and by this point, it’s clear what choice Shiro made.

Adam doesn’t appear again until episode eight, “The Last Stand Part 2”, where he and a number of other Garrison attempt to hold back the Galra invasion with a fleet of outclassed fighter jets. Though the pilots put up a good fight, they’re all quickly outmatched and killed, and that’s the last we see of Adam. 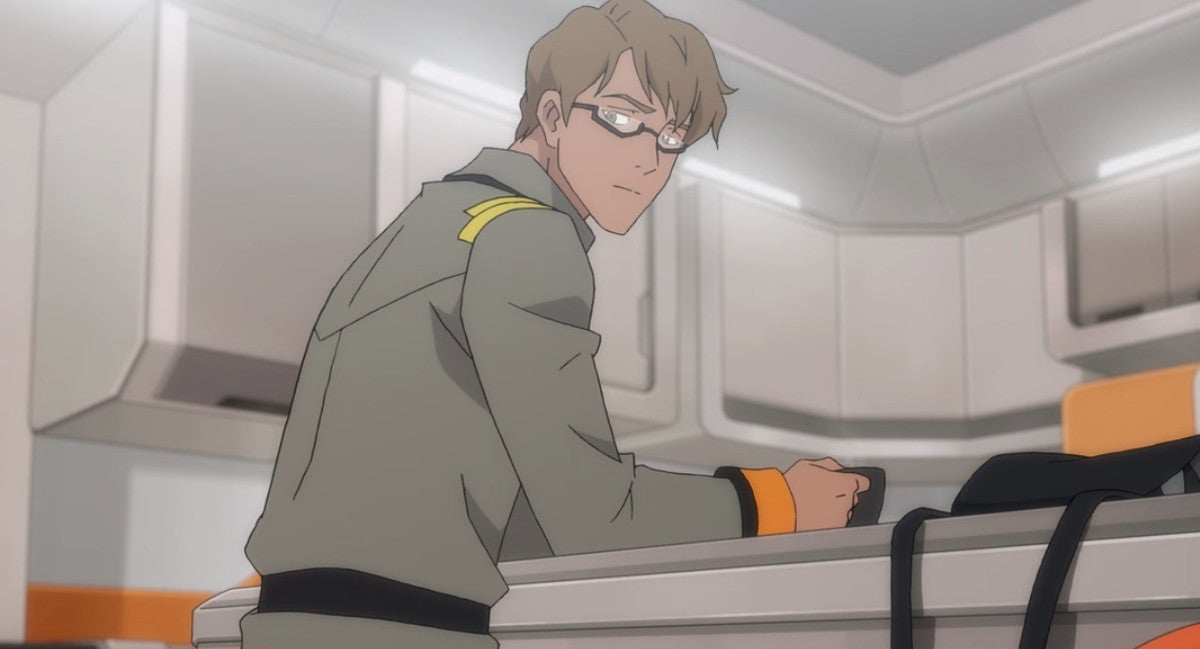 Given how Adam simply wasn’t a part of the show long enough for audiences to get a sense of who he was as a character, and his relationship with Shiro was major component of the season’s announcement, some fans have responded to Adam’s death with accusations of queerbaiting just to boost interest in the show.

When we spoke about potential backlash from fans, Joaquim Dos Santos explained the reason we see so little of Adam in the season is that the story is meant to be about who Shiro is in the present:

From a character perspective, I think we really wanted to get across that Shiro is somebody who was dealing with complex, interpersonal relationships before he even became a paladin of Voltron.

We catch up with him at the tail end of a relationship where we see he’s chosen duty over his love life. It’s a difficult, mature decision for anyone to have to make, but it’s the sort of thing that we’ve always known Shiro would be able to do. If you look back at the beginning of the series, you see that Shiro was already bringing that energy to the team. He was the pillar of strength on the team and this new development adds a new depth to that.

During the Comic-Con announcement, the Voltron creative team made a point of describing Shiro and Adam having previously been lovers, leading some to assume that the show might focus on their coming back together. But ultimately, Lauren Montgomery said, the choice was made to leave their relationship in the past in order to keep moving Shiro forward:

Having them at that point in their relationship was easier for us from a storytelling standpoint because it let us free Shiro up from that particular kind of plot line.

We didn’t want his entire story to be about constantly worrying about getting back to his boyfriend on Earth, because at this point the Paladin’s missions are much bigger than that and when they all make it back.

Team Voltron’s return to Earth comes at a time when each of the Paladins has given up almost more than they can imagine in their quest to bring peace to the galaxy. Even though Shiro no longer pilots the Black Lion, his homecoming is uniquely painful because of the specific circumstances of his departure. Though the degenerative disease Shiro suffers from isn’t specified, it’s introduced with a gravity that conveys just how much of an impact it has on his life.

Watching two gay men have that kind of discussion about a chronic disease robbing them of the time they have left together, it’s easy to see it as a parallel to the kinds of conversations a couple dealing with HIV/AIDS might have, but Montgomery explained that’s purely coincidental:

We didn’t pin it down to any one specific Earth-born disease, but it’s something more along the lines of a Parkinson’s that eventually would affect his ability to fly and be an effective pilot. Ultimately, it’s what would have kept from achieving the goals in life he wanted and it puts a limit on the amount of time that he has.

In that moment, he’s being put in a tough position by Adam, but it’s even more difficult because he knows he’s got this kind of ticking clock element to his disease that’s going to progress to such a point that he’s not going to be able to do much of anything eventually. It’s important remember that Hagar and the Galra, for good or for ill, have pretty much cured him of that disease in creating the clone body his mind exists in now.

It isn’t difficult to understand where everyone’s impassioned feelings about Voltron’s queer representation come from. In a very literal sense, the show unceremoniously buries one of its only two queer characters the very same season he’s introduced, and you wouldn’t even know that he was queer simply from watching the show by itself.

That being said, queer representation comes in many different forms, some of which are none too heartwarming. Voltron cast member Bex Taylor-Klaus took to their Twitter feed soon after fans began expressing anger about the show with a reminder that the season is, at its core, a story about war.

Season 7 is about war. About the casualties that amass when a world is locked in anger. It’s not just a silly kids show about space cats. It’s so much deeper. So much darker. It’s raw and real regardless of its fantastical settings

It’s not queerbaiting, @jarjarstiddies — it’s just not the queer content you wanted.

Relationships sometimes end in loss, and those queer stories are worth exploring as well. The problem, of course, is that queer representation on screen continues to be so woefully lacking that plots such as Voltron’s feel like a slap in the face.

It’s a matter of personal opinion whether you see Voltron’s seventh season as problematic. Regardless of which side of the issue you fall on, though, there’s something to be said for the fact that the conversation around the show now has moved into a new space.

Imperfect as it may be, Voltron’s made its first step in the right direction. Hopefully, the creative team behind the show has taken the fandom’s reaction to heart and plans to try and do this better next time around.