Superhero team-up series are, by their very nature, grand affairs. They’re about mighty heroes worthy of (and/or currently) starring in their own series, coming together to face insurmountable odds as something more than they are. West Coast Avengers is also like that, but scaled down to an endlessly charming point.

Relaunched with the team of Kelly Thompson, Stefano Caselli, Tríona Farrell and Joe Caramagna last week, West Coast Avengers puts the spotlight on some characters and even a whole American coast that Marvel’s universe usually tends to skip out on. (In Marvel comics, important things primarily happen in just two places: New York and space.)

The Hawkeyes — that’s Kate Bishop and Clint Barton, known for their recently scrappy escapades away from the drama of the wider Marvel universe events — are probably the “biggest” characters of the first issue. They haphazardly find themselves pulling together an oddball team of heroes that can be described, diplomatically at least, as “Kelly Thompson’s home for cancelled Marvel series”. 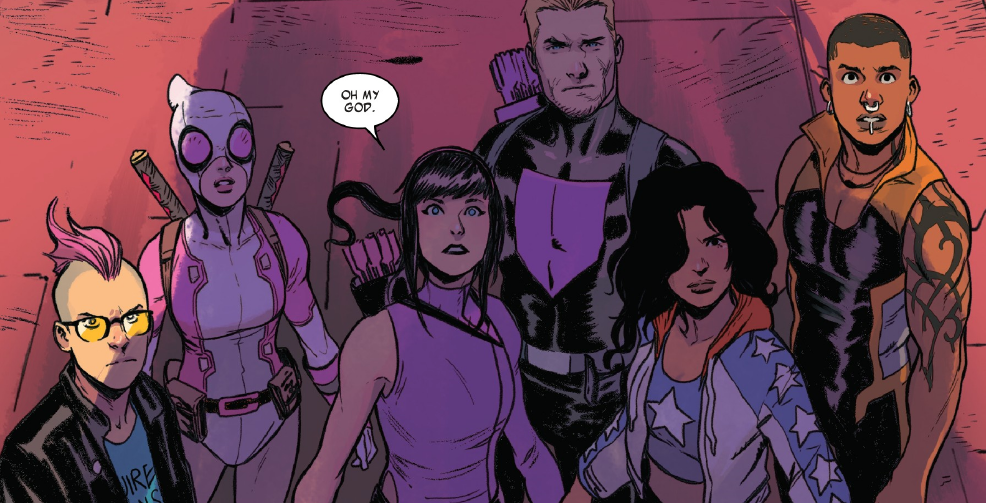 Say hello to your new Avengers. Not to be confused with the New Avengers! (Image: Stefano Caselli, Tríona Farrell and Joe Caramagna, Marvel Comics)

All of your favourites from series not enough people read (despite them being pretty good) are here: There’s the Hawkeyes of course, joined by portal-punching cosmic heroine America Chavez, the fourth-wall-bending Gwenpool, perpetual smart-arse and future Phoenix-Force-wielder Quentin Quire, and even a new(ish) character in the form of Kate’s recent boyfriend Johnny Watts, operating as the newbie superhero Fuse.

Such unlikely heroes are brought together by an equally peculiar premise: Kate has realised there are basically no superheroes who operate on the West Coast. Which is a) a really bad idea in a world filled with supervillains and weird shit, and b) a prime opportunity for her to bring together some friends and protect LA beyond her recent role as a PI for hire.

Oh, and to fight Land Sharks as well, actually.

While West Coast Avengers is a smaller-scaled team series than… well, literally any other Avengers book, there’s still a level of zaniness that makes putting these characters together — especially given their relative inexperience with each other — fun to watch.

The first issue is bookended by two such missions for the new team; the previously noted Land Sharks attacking Santa Monica as the opener, and the appearance of a gigantic, seemingly possessed version of classic WCA team member Tigra at the end.

These situations prove not just how right Kate is in wanting to bring together a team of heroes, but also how wildly over her head she might be trying to scrape together an Avengers squad without the financial backing or reputation of a lot of the rest of Earth’s Mightiest Heroes.

But what makes West Coast Avengers’ latest iteration truly shine is that these fights are not the most important part of the issue.

Yes, the Land Shark attack is Kate’s catalyst for putting out the call for new teammates, and the 15m Tigra is their first big test. But WCA revels instead in the downtime between these moments, as Kate attempts to pull together a group of people who barely have the remotest idea of why they’re participating in the first place, let alone actually wanting to be anywhere near each other. 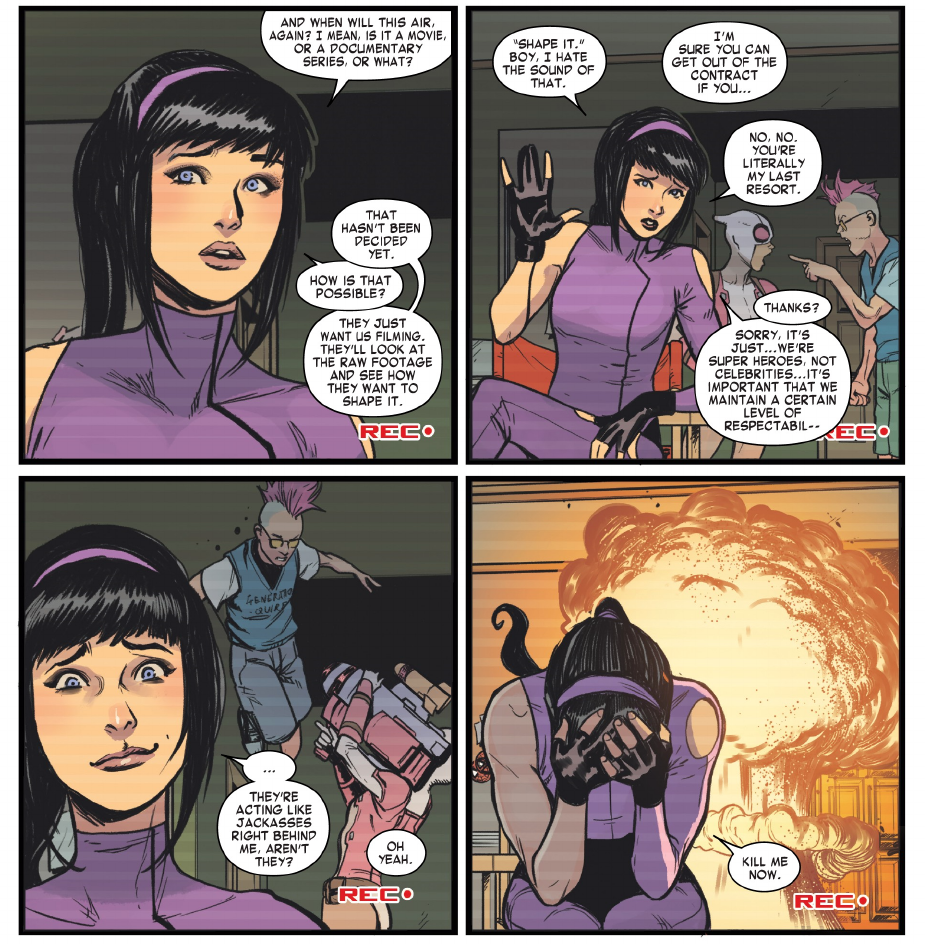 A lot of this team downtime is framed as being filmed for a reality TV series pitched by Quentin to a hapless production crew — providing the scraps of cash Kate can use to actually, you know, supply and fund the existence of the team in the first place — as each hero openly acknowledges how they’re wildly unprepared to defend Marvel’s most undefended coast to the rightfully unconvinced camera crew.

Typically a team book is about getting its disparate heroes unified and acclimated as soon as possible, brushing over the initial road bumps of not just working as, but living in, a group situation, to get to the part where they work together to punch bad guys. But West Coast Avengers, at least so far, focuses on finding a lot more fun by focusing on those goofy road bumps instead of the team action itself. 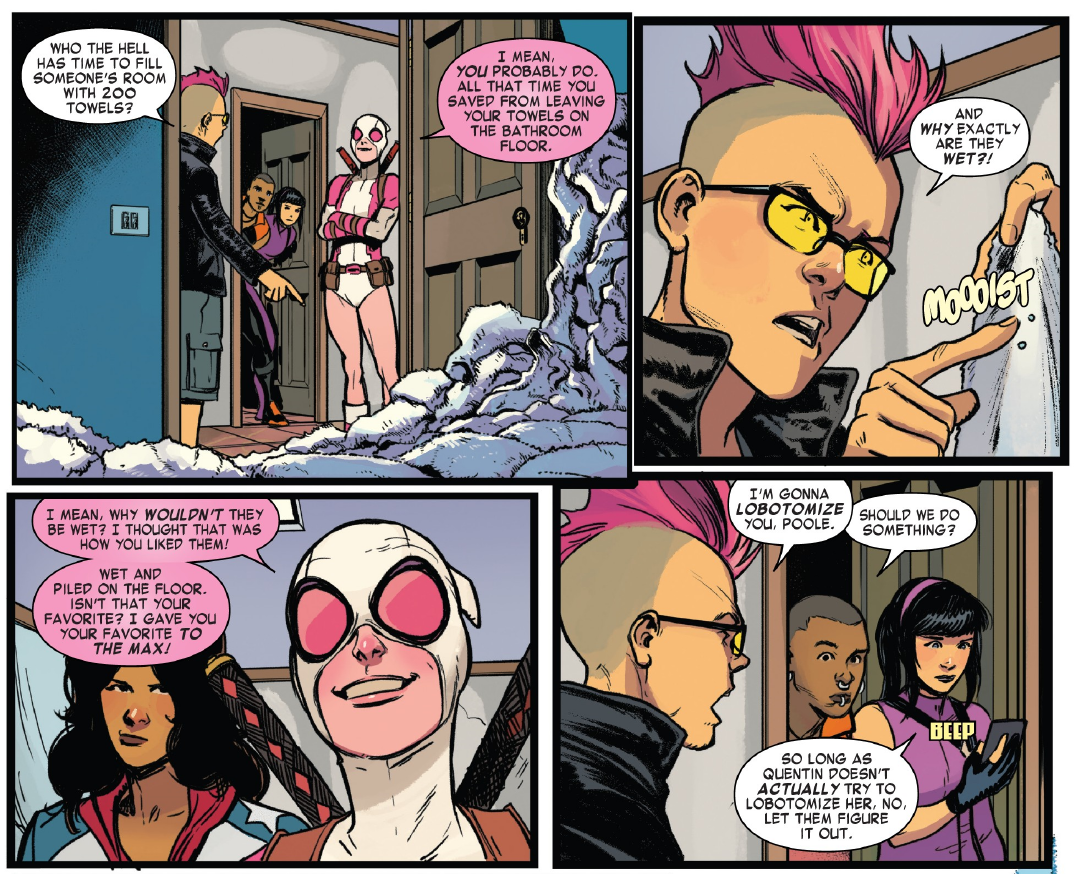 Downtime in team books is usually kept to a minimum, but West Coast Avengers embraces the character and charm of those moments. Cramped living arrangements and lousy bathroom habits are just as threatening to the dynamic of this nascent team as the aforementioned sharks and Tigra attacks — and for now, I kind of hope that’s the groove West Coast Avengers finds itself in going forward.

Sure, at some point Kate will get used to being a team leader again, as will her teammates get used to working together. Quentin and Gwenpool will maybe stop trying to kill each other. But in a world of slick team operations, I am happy to have at least one supergroup that is a gathering of Marvel’s most dysfunctional heroes.