cyberpunkheather's indie pickher storykotaku corelinuxmacsubserial network
To sign up for our daily newsletter covering the latest news, features and reviews, head HERE. For a running feed of all our stories, follow us on Twitter HERE. Or you can bookmark the Kotaku Australia homepage to visit whenever you need a news fix.

In Subserial Network, humanity as we know it doesn’t exist. Instead, synthetic beings populate the world. They live mostly normal lives. There’s only one rule: Don’t connect yourself directly to the net. The synthetics who disobey are deemed “Subserials”. Your job is to hunt them down.

Subserial Network is an investigation game where you need to discover the leader of an underground movement of deviant synthetic beings.

You take the role of an agent of CETUS, a world-wide governmental organisation that monitors and enforces the law. In order to learn more about Subserials, you type keywords into a search bar and sift through webpages, chatrooms and defunct internet haunts to make new contacts and impersonate someone looking to upload themselves to the net.

Functionally, the game plays out a lot like Sam Barlow’s Her Story. You might stumble on a fan-fiction site and find that one of the most popular authors has disappeared. From there, you might search the larger network of fan sites and stumble on a guestbook on the author’s personal site. You could email someone with some questions, and after a few emails back and forth, you’ll get invited to a chatroom where curious synths talk about going Subserial.

This presentation is part of what makes Subserial Network so interesting. The game’s numerous applications — browsers, chat rooms, MP3 players — take up real space on your desktop. (You can play on PC, Mac or Linux.) Some sites have files that you need to download and open using Notepad. In one case, you can download an entire game off someone’s site; within the fiction of the game, it’s a long-preserved relic archived by a curious synth.

This design adds a lot of weight to the sleuthing. Managing an email conversation, monitoring people of interest in a chat room, and testing out new search phrases all at once makes you feel like a proper cyberpunk detective. 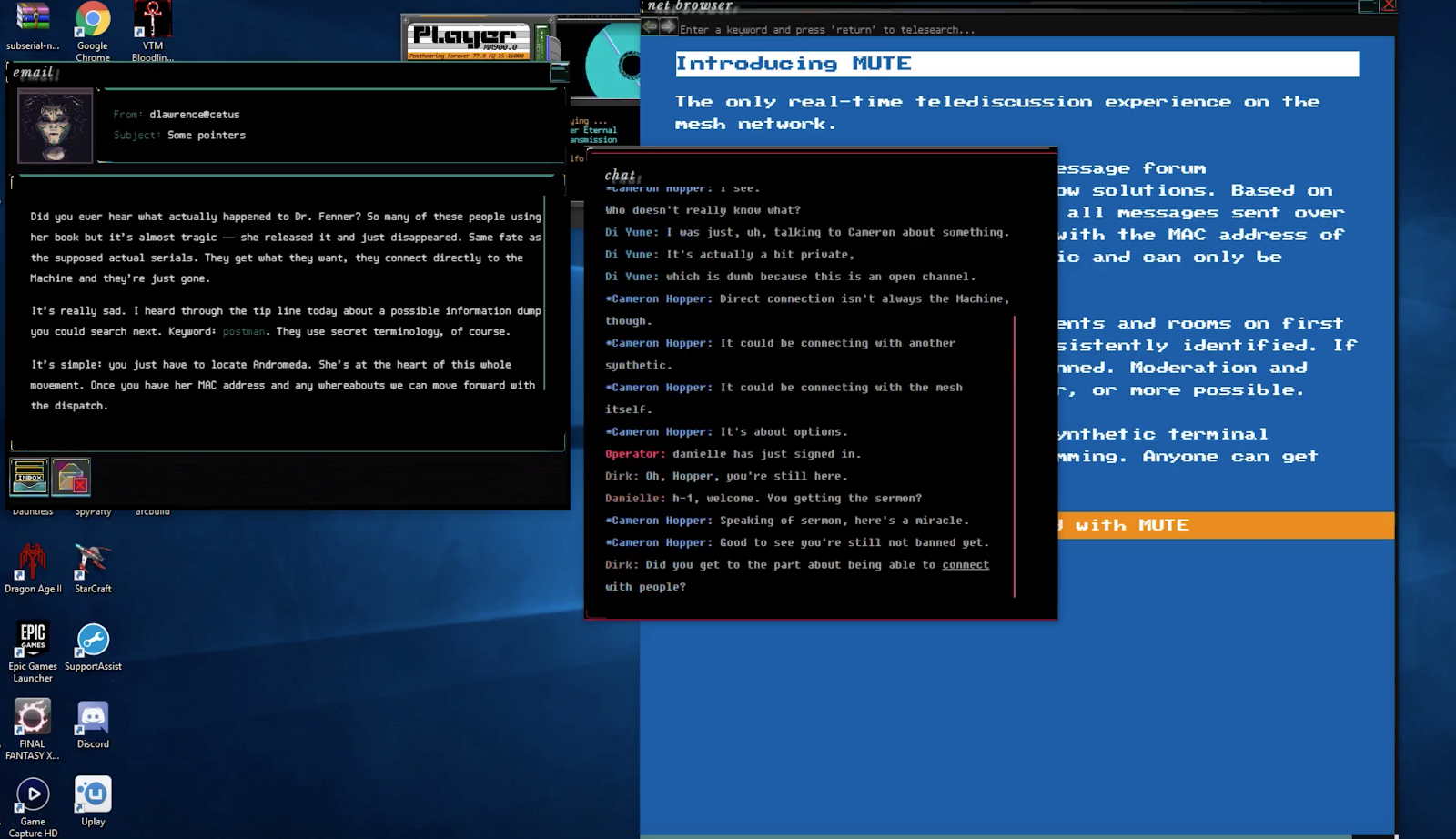 Each new answer also leads to another interesting question. Why did that synth stop writing their LiveJournal-esque updates? Turns out, they found a magazine clipping with a human who looks exactly like them and they were so freaked out, they completely dropped off the net. Are synths just humans who forgot what they were?

As you get closer to identifying Subserials, the world you thought you knew falls apart. At some points, I questioned if the people I was chatting with were already uploaded to the net. Did they already know I was a no good narc? And hey, some of the points they’re making sound good. Maybe I should give this uploading thing a try…

Subserial Network is only a few hours long, but it’s a gripping snoop-fest that tangles with big ideas. It’s the closest thing I can think of to a modern Blade Runner adventure game.

If you ever wanted to feel like a cyber-sleuth, it’s worth sitting down for a few hours to puzzle out Subserial Network’s web of contacts and hidden pass phrases. Just make sure to put on some moody saxophone music and drink a few fingers of whisky while you do.