A Ton Of Cool New Stuff Has Unlocked In Destiny 2: Forsaken

destiny 2destiny 2: forsakeneditors picks
To sign up for our daily newsletter covering the latest news, features and reviews, head HERE. For a running feed of all our stories, follow us on Twitter HERE. Or you can bookmark the Kotaku Australia homepage to visit whenever you need a news fix.

Shit has finally gotten real in the Dreaming City, as Bungie has made good on its promises to regularly introduce cool new stuff to the latest Destiny 2 expansion, Forsaken.

Yesterday, the new Dreaming City location changed significantly, with Taken blights opening up all over the place and a couple of challenging missions becoming available. Additionally, there’s a new competitive PvP mode, another new weekly Ascendant Challenge, and yet another new exotic quest that has also begun to drop for players of the new Gambit mode.

Even for someone like me, who’s been playing Forsaken nonstop since it came out at the start of September, it’s been too much to get my head around in a single day.

In the buildup to Forsaken, Bungie’s developers were talking a big game about their post-release plans for the expansion. They wouldn’t be repeating the content droughts of Destiny 2’s first year, they promised, and pointed to the new Dreaming City location as the hub for ongoing excitement.

They didn’t get too specific, likely because they wanted to preserve surprises for players, so most of us have been taking a wait-and-see approach. 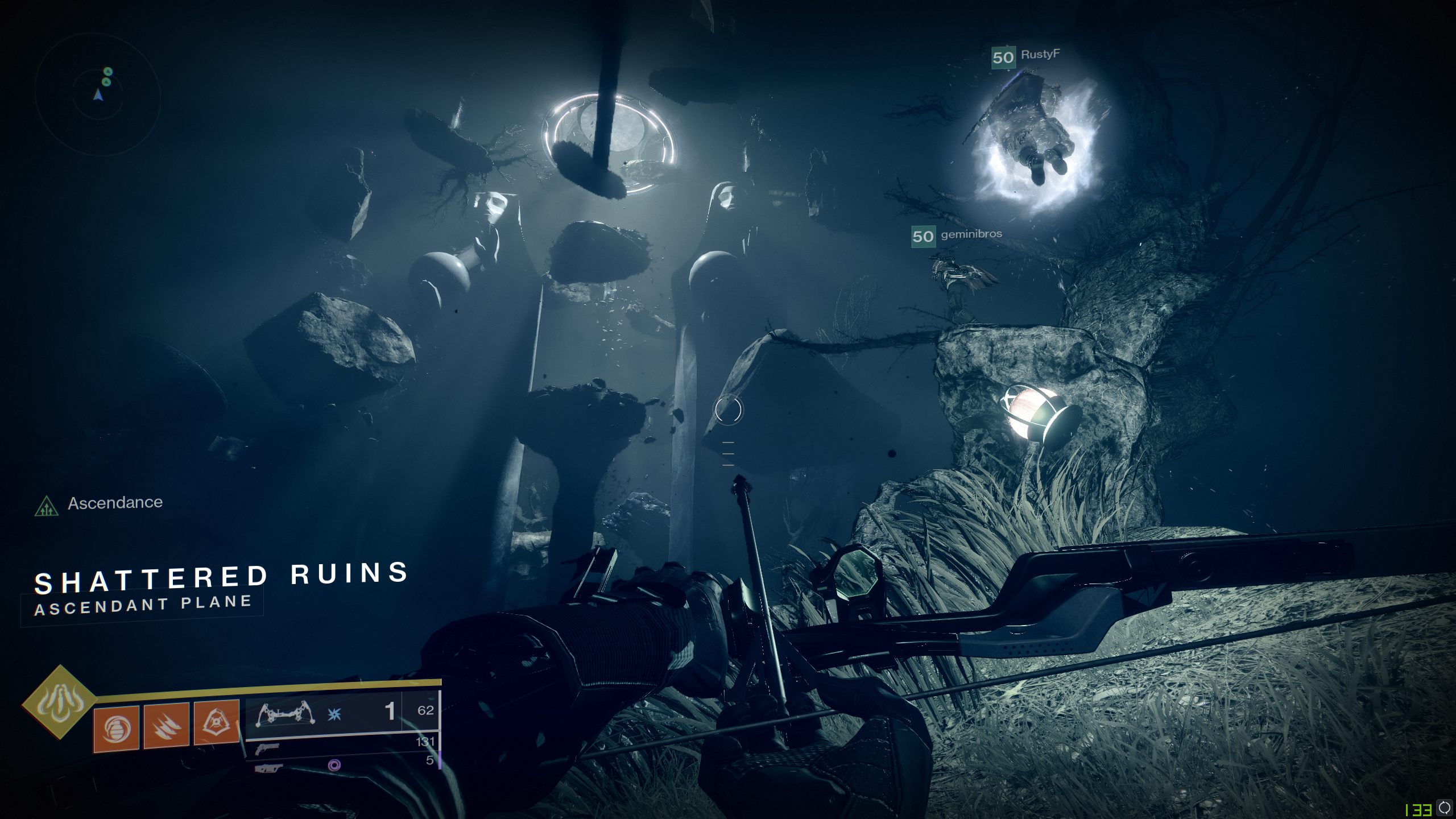 The first wave of stuff unlocked a couple weeks ago in the wake of Clan Redeem’s world’s-first raid completion. Killing the boss of the raid unleashed a curse on the Dreaming City, opening up new story missions and a new strike for all players.

The strike, called The Corrupted, is easily the most exciting and visually arresting strike in Destiny’s four-year history. Players leap through terrifying space-boulder fields in the Ascendent nether realm, chasing a boss from platform to platform while avoiding waves of asteroids.

The new story missions, one each week, have progressed the story of the Taken curse, sending players to some of the best-looking parts of the Dreaming City. While fairly straightforward by current Destiny standards, they each feel like distinct, carefully crafted missions.

Even with that neat stuff unlocked, there was still a vague rumble of discontent among players. OK, so, a new strike and some new missions. Was that it? As it turned out, that was not it. This week, the Dreaming City entered the final stages of its Taken curse, and a whole bunch more stuff has turned up in the game. 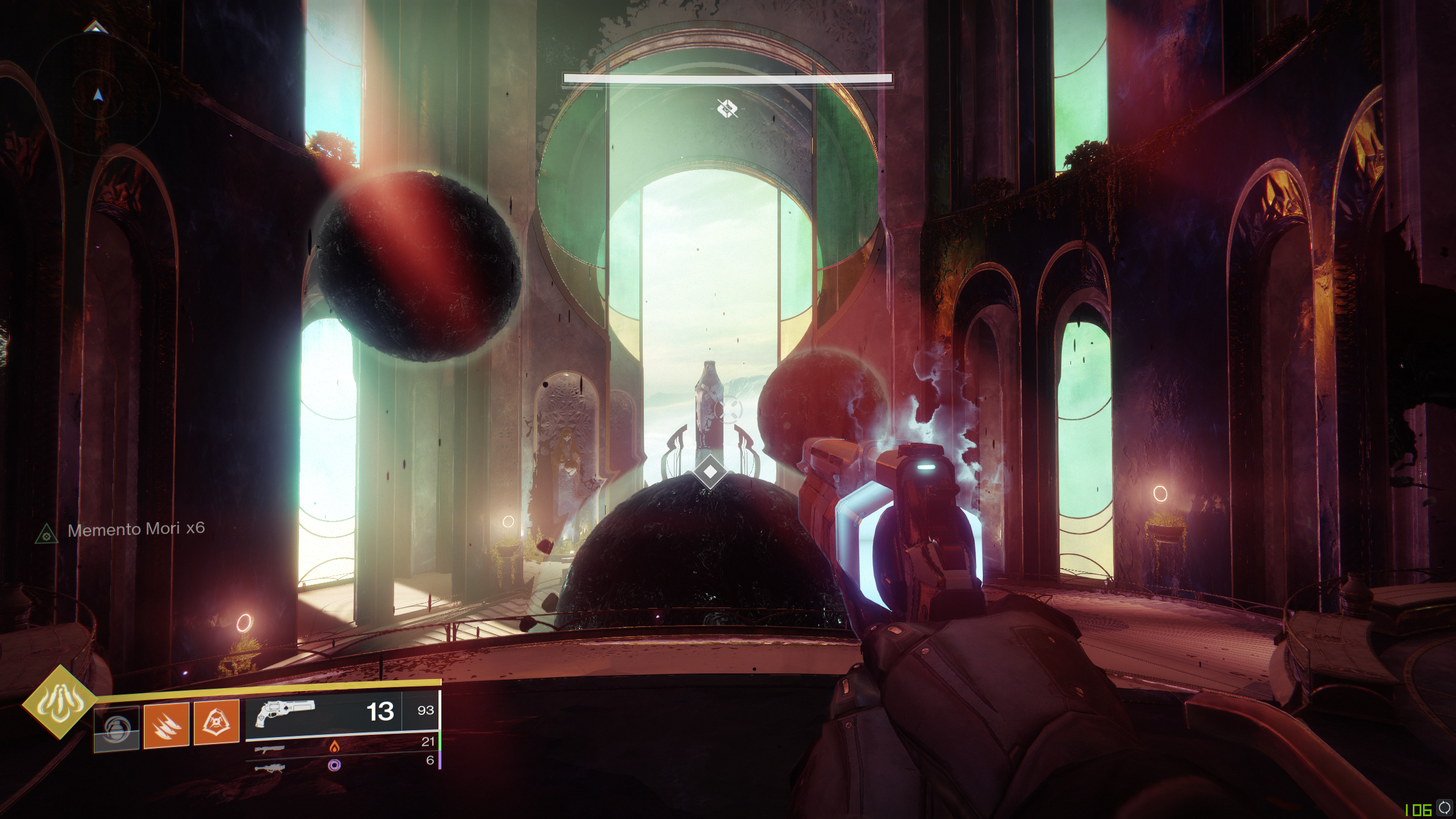 First, there’s yet another story mission, called Dark Monastery. It’s another fun story mission that involves overcoming some unusually large hordes of Taken and Scorn enemies, with some now-expected Ascendent Realm shenanigans at the end, hinting at yet more stuff hidden in that dark parallel world.

Then there’s the new quest for the exotic bow Wish-Ender, which you can access in the Dreaming City’s Confluence area. Wish-Ender was teased in the video Bungie released showing all the Forsaken exotics; it’s the bow that lets you see enemies through walls when you aim it.

This quest is probably the wildest thing to appear this week, and requires you to make your way through a dungeon called The Shattered Throne that, at least according to friends of mine who’ve survived it, is in some ways a new kind of challenge for Destiny. The Shattered Throne comes with a suggested power level of 590, which is so far above where I’m at that I haven’t bothered even attempting it.

If you want to see how it works, check out this guide by the always reliable Datto:

You can also read a breakdown of the quest written by redditor MattMan7496.

As if one new exotic quest weren’t enough, yet another exotic quest also started dropping on Tuesday: the quest for the hand cannon Malfeasance. The quest starts with a drop from a special boss that can turn up during a match of Gambit called an Ascendant Primeval. The appearance of the boss is apparently random, so whether you get one comes down to luck.

Beat the boss, and an item called The Seething Heart will drop and you’ll begin the quest. The rest of the steps will be familiar to those who have done one of Destiny 2’s past exotic quests. They’ve been cataloged by redditor ADT7. 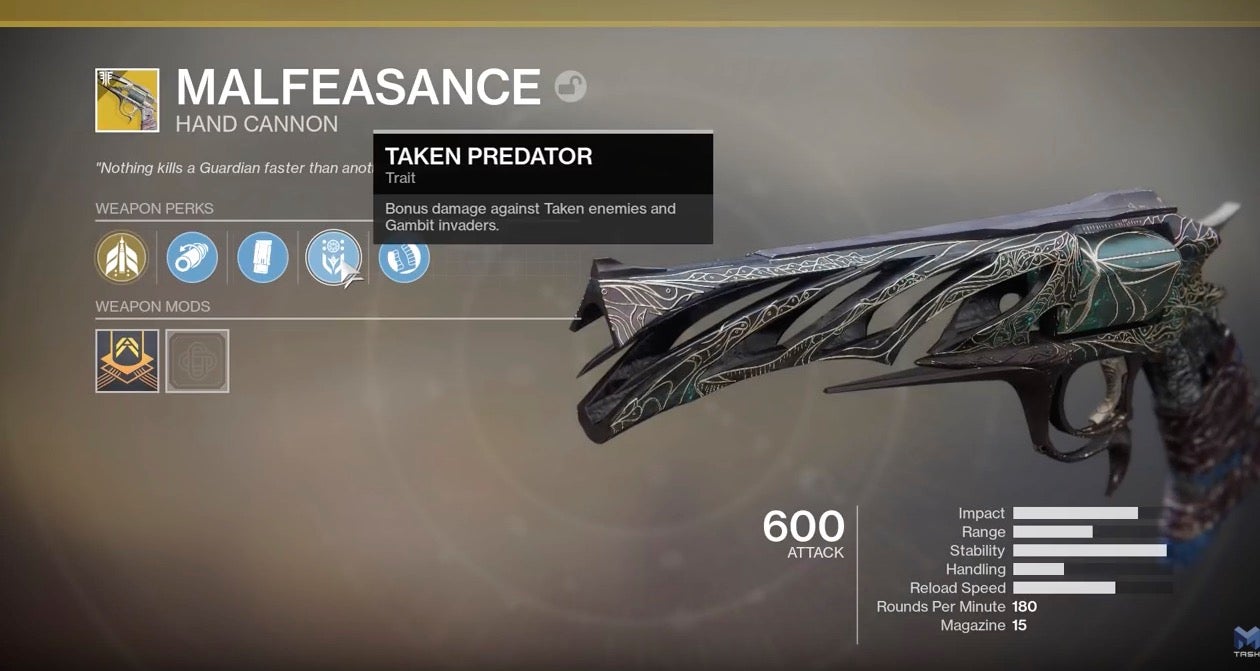 Malfeasance sounds like an interesting weapon, with a few unique perks. One gives you bonus damage against Taken enemies and Gambit invaders, which makes it ideally suited for use in Gambit. (Might this gun prompt people to finally stop using Sleeper Simulant in Gambit? Possible, but unlikely.)

It also shoots “tainted slugs” into enemies that, should you stick five of them of them, will explode for extra damage.

I watched Mtashed’s review of the gun, and while it sounds niche enough that I don’t see myself using it all the time, it also strikes me as the kind of gun that’s ripe for a buff.

Destiny 1’s infamous hand cannon Thorn was initially garbage, then got a huge buff that turned it into one of the dominant PvP weapons in the game. I could see the same happening for Malfeasance. For now, it’s still a shiny new thing and I therefore want it.

Yesterday we also got a new PvP mode called Breakthrough. I’ve only played a single match, but it was plenty of fun, occupying a middle ground between the sweatiness of the Competitive playlist and the relatively relaxed vibe of Quickplay. Teams of four duke it out to occupy a central control point long enough to unlock the “vault” located back at the other team’s spawn. The team who manages that must then invade and capture the unlocked vault control point to win the round.

The defenders can still win, however, by repelling the invaders until the clock runs out. Best three out of five wins the match. Breakthrough shares some aspects in common with previous Destiny PvP modes, and I don’t have a sense of how it’ll fare long-term. I did have a good time with the match I played, though.

Thanks to all this new stuff, along with my regular glut of weekly challenges and Dreaming City bounties and the fact that I’m still working toward getting past the second part of the Raid, I’m more overwhelmed by stuff to do in Destiny 2 than I have been at any point in the past year.

Part of me is certain that this is the last, biggest dose of new stuff we’ll get for a while. But Bungie really does seem to be operating on a new level with this expansion, so we’ll have to wait for next week to see.