Every Destiny expansion launches with some bugs. That’s been doubly true of the new Forsaken expansion, which for all its many improvements has also introduced an unusual degree of uncertainty and frustration thanks to bugs and other technical problems.

Since Forsaken’s launch last Tuesday, Bungie has been documenting known problems small and large on the company website. I can’t imagine most Destiny players routinely check the Bungie blog for known issues as they play, meaning that most of us just run into those issues in the wild.

Among the more noteworthy issues was a bug related to “powerful” loot drops that struck over the weekend. Powerful drops are rarer than ordinary loot drops, and are essential for raising your character’s power level past the soft cap of 500. Each week players are given number of weekly challenges that offer powerful drops, if you can complete them before the Tuesday reset.

This past weekend, however, a handful of weekly challenges unexpectedly reset on Saturday afternoon instead of Tuesday, leading to widespread confusion among players about what happened. Some players were partway through the challenges and found their progress reset. Others completed the new challenges and reported that they hadn’t gotten any powerful rewards for their troubles.

After some initial confusion, Bungie confirmed that the reset had happened early for some events, and that it would cost some players rewards they otherwise would’ve gotten. Players who had been carefully planning their progression according to the weekly/daily schedule Bungie had laid out were understandably pissed about having their progress thwarted by a bug.

We are continuing to investigate the issue where players did not have their Weekly Challenges reset properly.https://t.co/t6ksP5BMIx

Additional information will be provided when available. Stay tuned for updates.

Other problems have been less frustrating, and some even gave players opportunities they otherwise wouldn’t have had. Over the weekend, people figured out a way to glitch into part of the raid early, gaining access to a chest that dropped raid armour and weapons. I couldn’t resist checking that one out, and got a pretty cool raid rocket launcher for my trouble.

Bungie has since acknowledged the exploit and while they say they’re working on a way to fix it, they won’t take away the loot players get in the meantime.

Another glitch lets players farm coveted prime engrams, which should let them raise their power level faster than intended. Bungie says that one will “have negative long-term effects for a player’s power progression,” and that the developers “highly recommend that players do not use this exploit,” explaining that it will skew the algorithm and perhaps prevent players from gaining prime engrams for weeks to come. I’m avoiding it, at least for the time being. 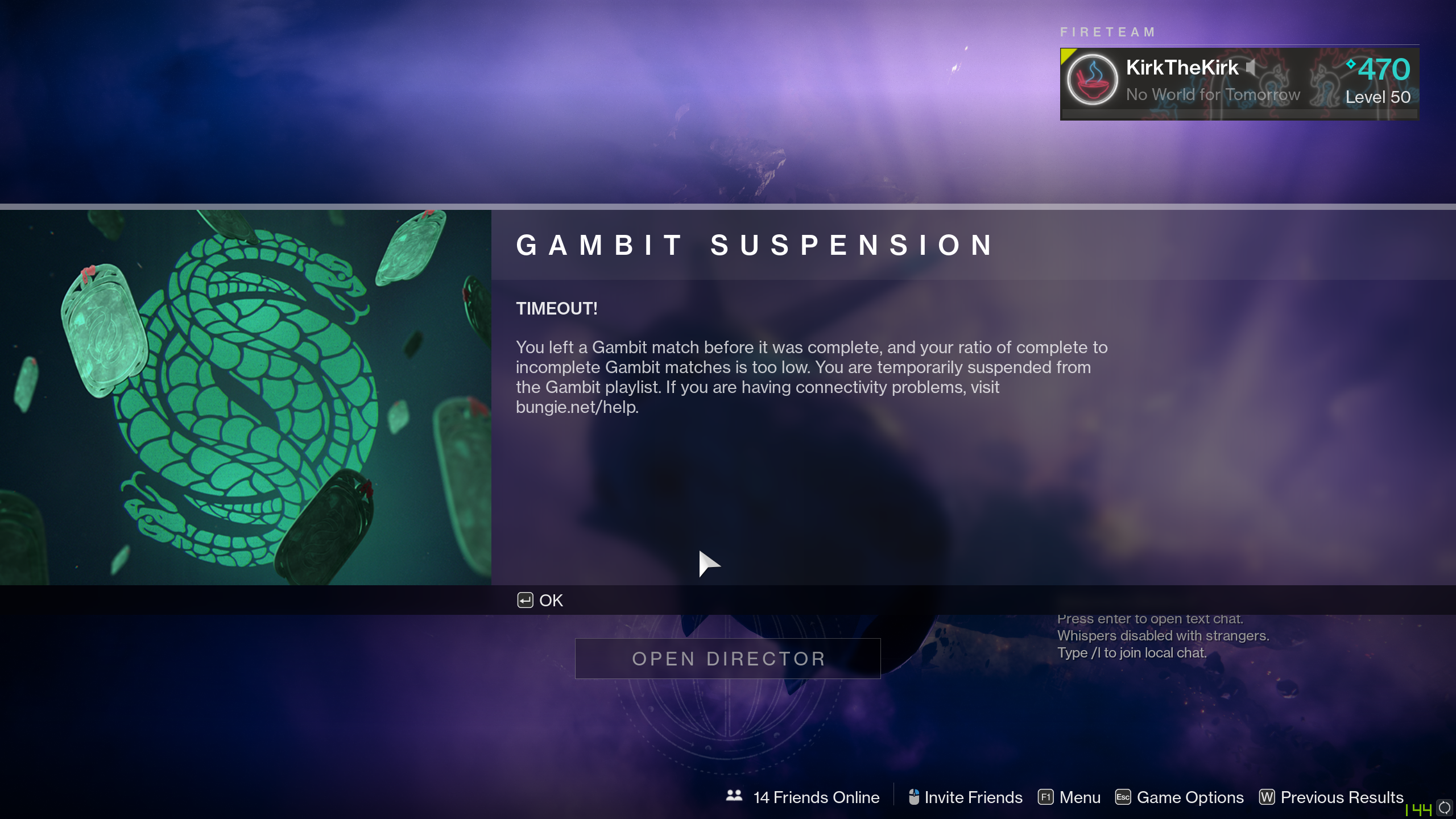 THE INJUSTICE OF THIS

On Sunday, I hopped into the game to play a round of the new Gambit mode. After matchmaking with some other players, I found myself stuck at a black screen.

Unable to proceed, I let the black screen sit for a minute, assuming that after a delay I’d load in alongside my team. Instead, I was kicked back to orbit… and notified that I had been temporarily suspended from Gambit! The suspension only lasted 15 minutes, and Bungie has since said that they’re “investigating server side changes to matchmaking” to mitigate the issue. I had to laugh at how incensed I initially felt at the unfairness of it all, though.

Another funny bug that Bungie has yet to acknowledge involves the new Blind Well public event in the Dreaming City. In the Blind Well, your team must clear a series of waves of enemies before fighting a boss. Each wave is on a timer, and you have to get a certain number of kills before progressing. One of the weapons you can use is an exotic fusion rifle called Telesto, which has a unique trait that lets it fire globs of purple goo that detonate after a delay.

Due to what appears to be an incredibly weird error in the way Destiny registers enemies, Telesto’s exploding blobs count as enemies in the Blind Well. (!!) That means it’s possible for teams to use multiple Telestos to zoom to 100% for each round, effectively skipping straight to the boss. I tested it myself over the weekend, and I gotta say, it’s one of the funniest exploits I’ve seen in Destiny since the original Crota LAN cable cheese. Hawthorne has new daily bounties after today’s reset, which is nice.

In addition to those easily noticeable issues, there have also been a lot of smaller ones that, when combined, have often left me in a state of uncertainty about whether the game is working as intended or whether I’ve encountered a bug. You can get weekly and daily clan bounties in the Tower now, but for the game’s first week, the daily bounties were the same every day.

I figured that daily clan bounties were set in stone each week, until I saw that Bungie had acknowledged it was an error, and the bounties should’ve been rotating. Several times I’ve completed a run through the Blind Well only to find that I can’t interact with the device that starts a new round. Some friends and I spent a while hypothesising as to whether this was an intended mechanic but, nope, turns out it’s a bug.

Other issues like that include the confusing first-step language on the quest to get Ace of Spades, which didn’t clearly communicate that players need to kill invading players, or the fact that players can get stuck in orbit for inspecting their friends’ characters under certain circumstances.

Sometimes, when doing an activity in a fireteam with your friends, you’ll randomly get booted and have to rejoin between matches. A bounty might say you have to get a certain number of “solar” kills without specifying that it means solar ability kills.

Today’s 2.0.2 hotfix has addressed some smaller issues like bounty text, but there are many more problems left to fix. Bungie says solutions for larger issues are in progress and will arrive somewhere down the road.

I’ve been having a great time with Forsaken despite the technical issues, as frustrating as some of them can be.

Forsaken is an exceptionally far-reaching expansion that changes almost everything about the version of Destiny 2 that Bungie introduced a year ago. It likely took an unusual amount of effort to get it across the finish line, and that work was likely more complicated due to the fact that Bungie was working jointly with a second studio, High Moon.

It’s understandable that rewriting and reconfiguring so many baseline systems would lead to more bugs than usual. And I’ve been having a great time with Forsaken despite the technical issues, as frustrating as some of them can be.

In fact, I actually kind of like this early period in the life of a Destiny expansion. There’s a sense of rowdy experimentation among players that is amplified in the wake of a major release. That’s partly because those early weeks are when the game has the most holes and exploits to discover, and partly because in the first couple of weeks, raid-prepping players are most willing to seek out weird tricks to help get their level higher.

To continue my adults-on-the-playground metaphor from last week, Bungie, the adults, have unleashed a bunch of kids on a brand new playground. It’s only natural that we’ll immediately start trying to break everything just to see if we can. For me, that sense of playful experimentation does a lot to offset the annoyance of bugs that cost me progress or waste my time.

It’s impossible to say when is the “best” time to play any modern big-budget video game. That’s always been true of Destiny, and so far it’s been true of Forsaken.

The game is in rough shape in some ways, and Bungie has yet to fix several major bugs. In a week or two, things will doubtless be a lot more stable and consistent. But there’s undeniably something special about these early weeks, as players enthusiastically test the boundaries of their new playpen and, occasionally, find things they can break.