Every Car In Forza Horizon 4 Has Its Own Perk Tree, So Of Course I’m Hooked

I am filled with glee. A little dread, but mostly glee.

Not that I needed more of an excuse to tool about for hours in my favourite Forza Horizon 4 vehicles. I was perfectly content with the way the previous game handled skill points. I’d perform lengthy stunt combos, stringing together jumps, drifts, hops and wanton destruction.

Doing so would earn me skill levels and points, which I would spend in ye olde Skill Shop. 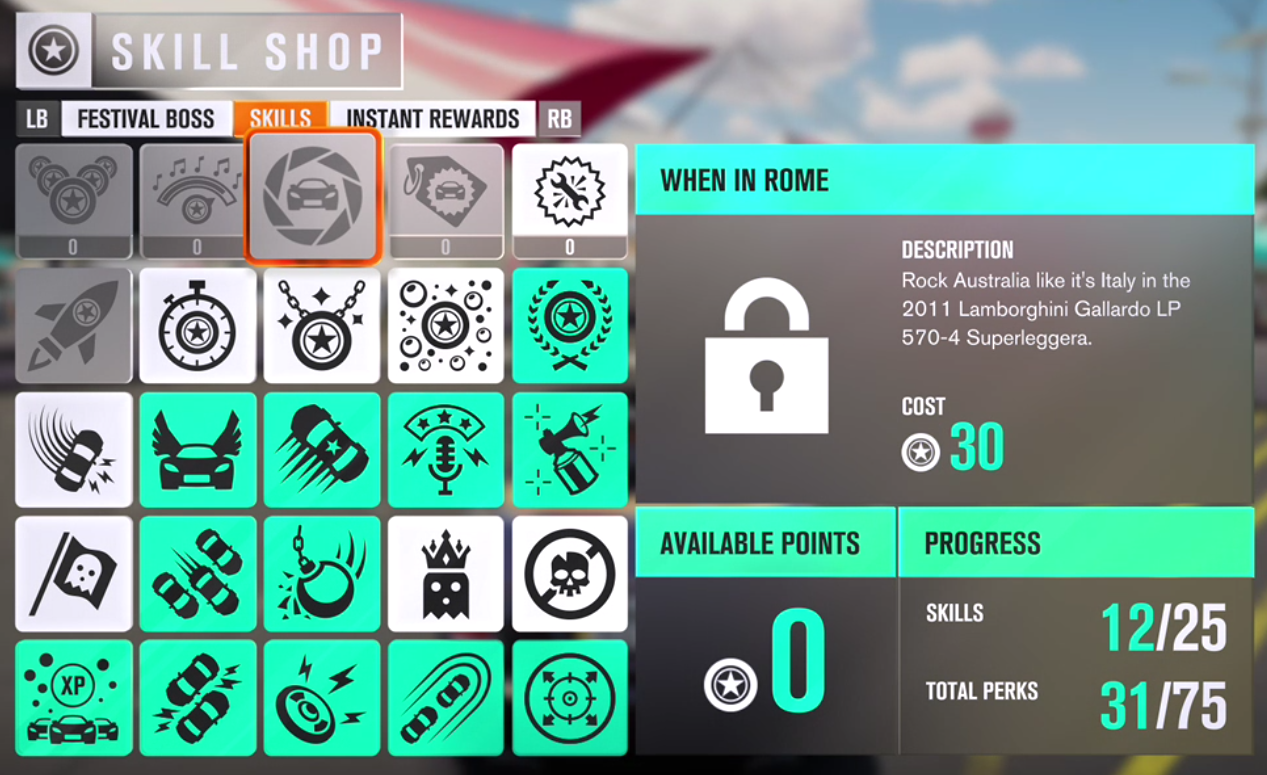 This time around, instead of having a single set of perks enhancing one’s entire Forza Horizon career, we get this: This is the Car Mastery perk tree for the Jaguar C-X75, one of the vehicles from the James Bond downloadable content for Forza Horizon 4. Being a Legendary class vehicle (as opposed to Rare, Epic or Common), the C-X75 has 16 different perks to unlock.

These aren’t random perks, but a group of bonuses carefully cultivated to reflect the vehicle. For example, in the lower left corner of the board is the “Collector’s Item” perk.

Its flavour text reads, “Your car is a masterpiece. Get an instant 5,000 Car Collection influence.” So by spending a skill point, drivers instantly gain a nice chunk of influence.

Other perks help players build up their skill combos, offering bonuses for specific actions, more time to string together stunts or an increased combo multiplier.

The caveat here, if that’s even the right word, is drivers can only earn skill points for specific cars while actively driving those cars. So in order for me to rack up all of those perks, I had to spend hours driving this: 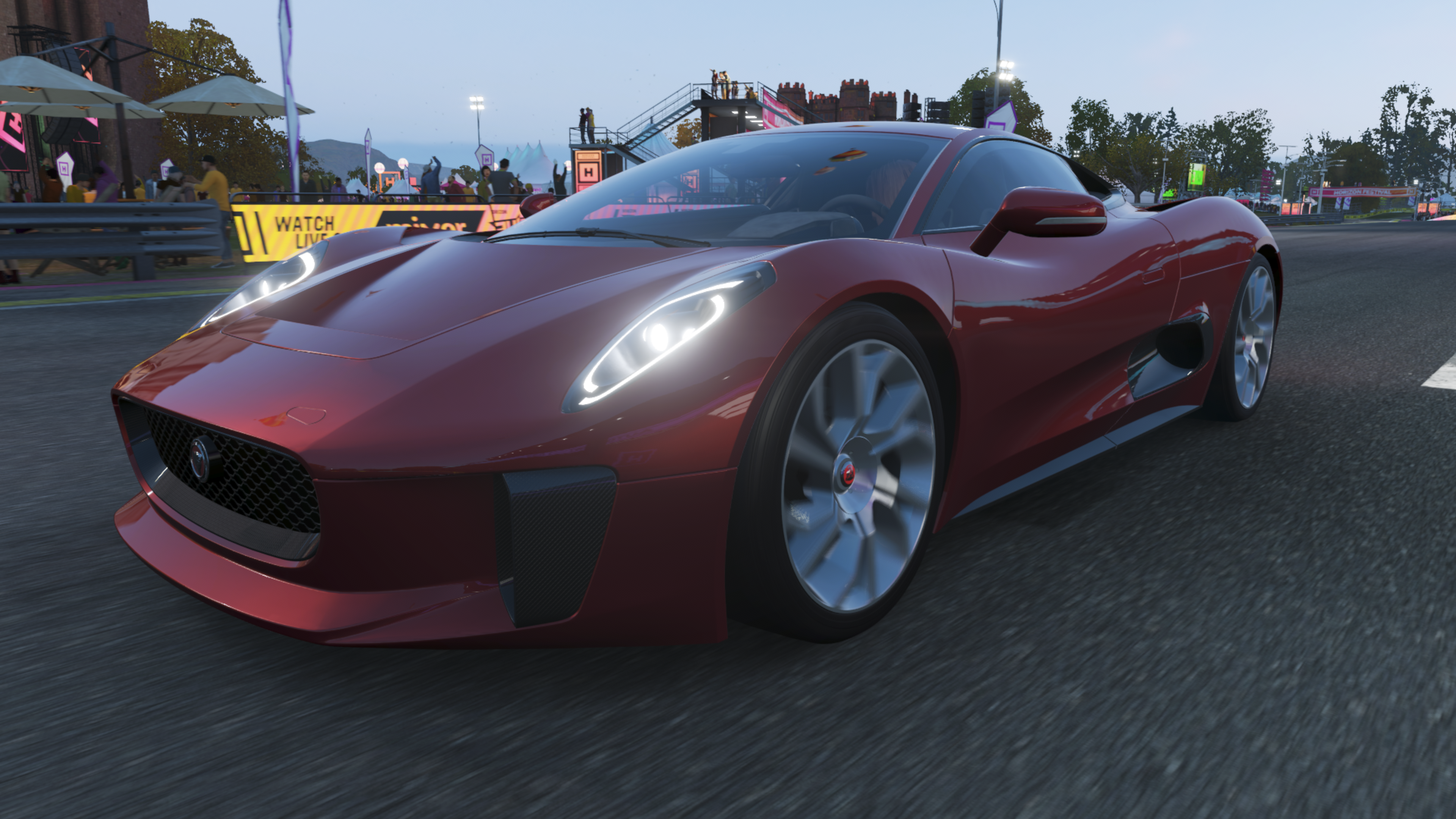 Woe is me, right?

Let’s take a look at a slightly different ride. This is my Rally Fighter, my off-road/dirt racing vehicle of choice. It’s an Epic, so it only has 13 perks to unlock, but those perks are appropriate to its character.

They’re enhancing air skills, destruction skills and speeding up combo multiplier generation. This is a vehicle to weave through trees and knock down fences. 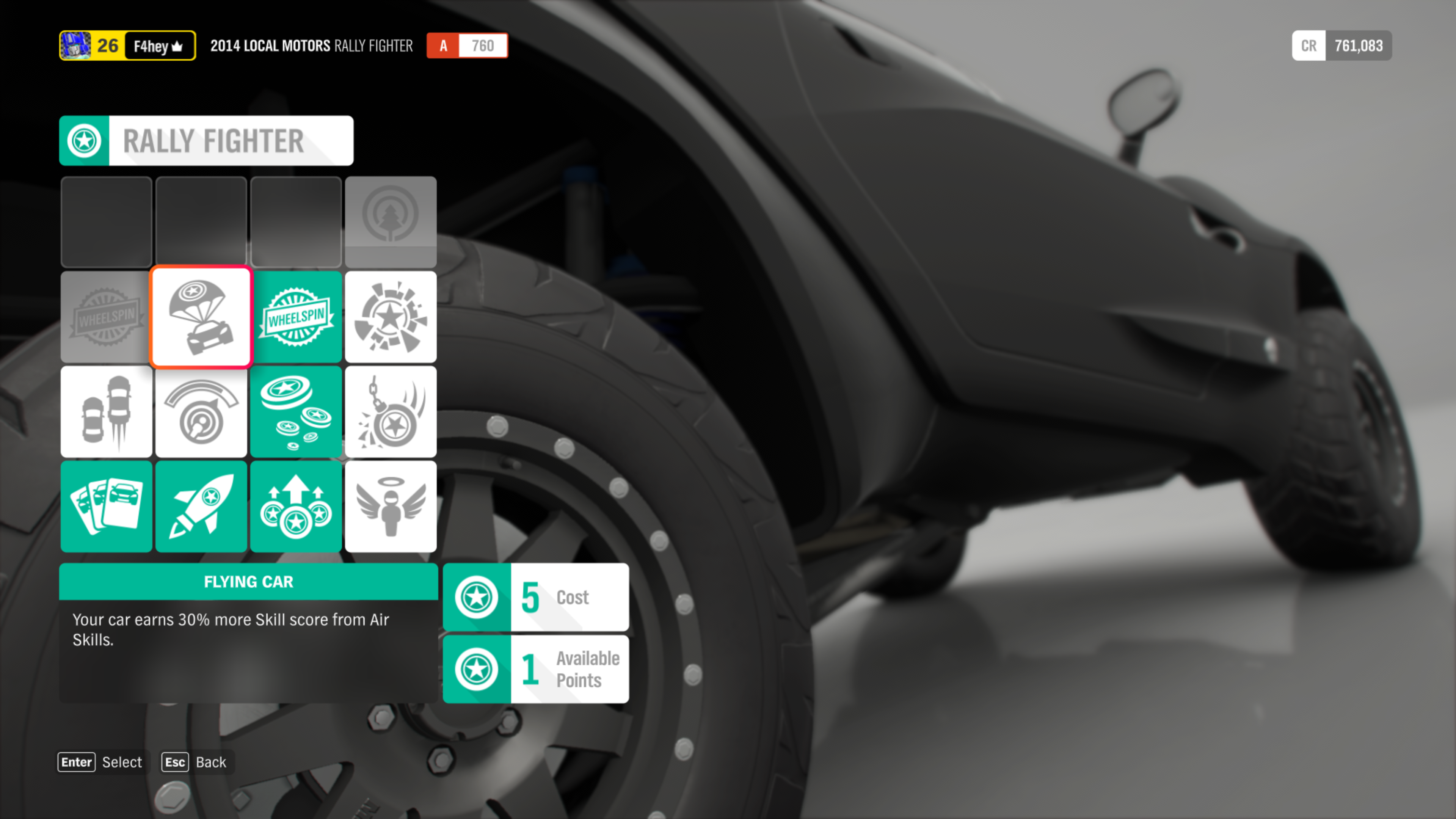 I love this beastie.

Like the previous Forza Horizon games, Forza Horizon 4 is a joy to play. It strikes the sweet spot between arcade and simulation racing so perfectly that it’s easy to get lost for hours doing absolutely nothing. Look at my game map. I need to start racing or doing events or whatever. 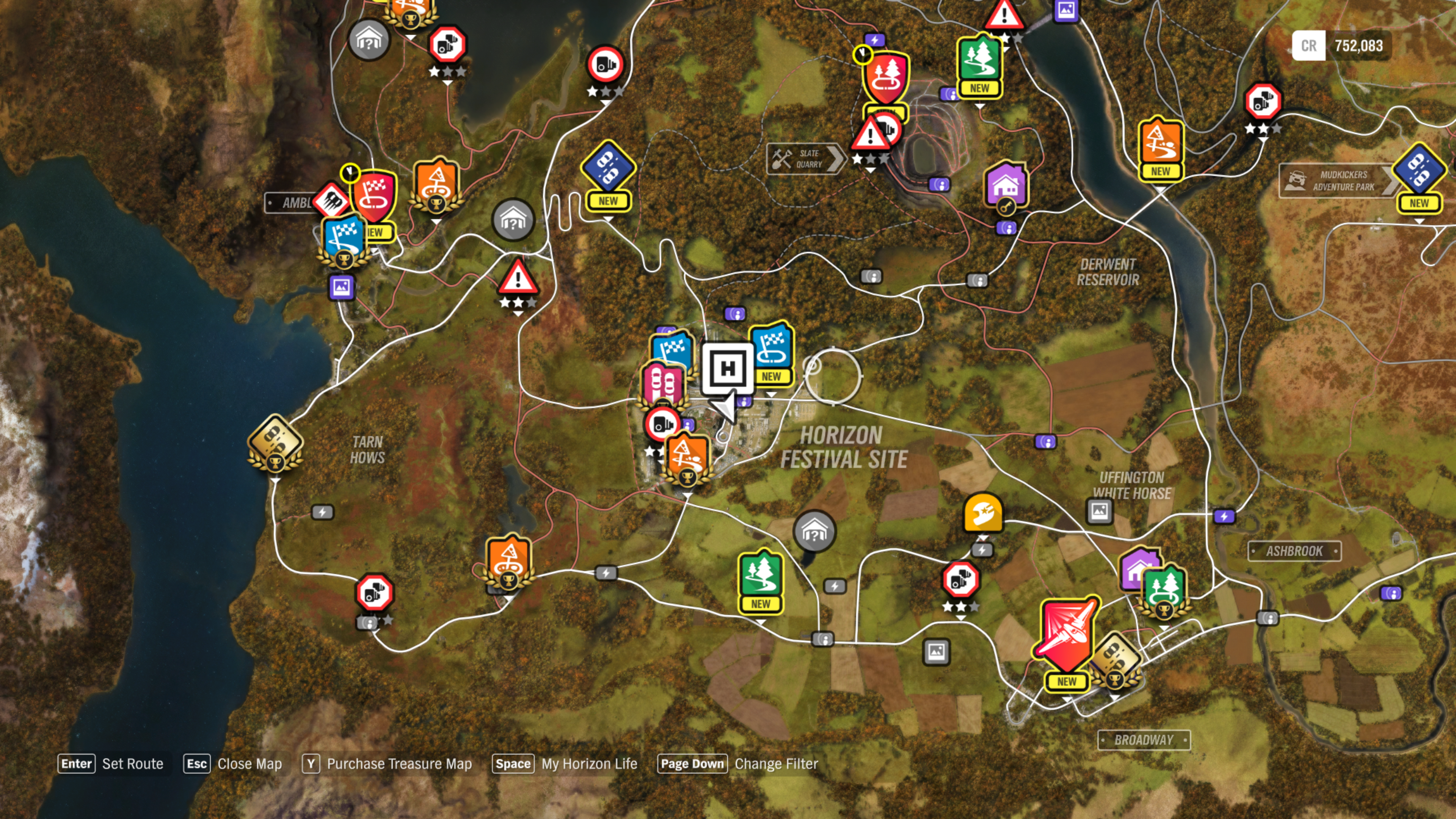 Or I could just hop around the hills and master all of those cars. It’s like the developers knew my proclivity for screwing around and added in the Car Mastery system in order to encourage and reward that behaviour. Thanks, developers!

Now if you’ll excuse me, I have several hundred cars to master, and at least one to Master Chief. 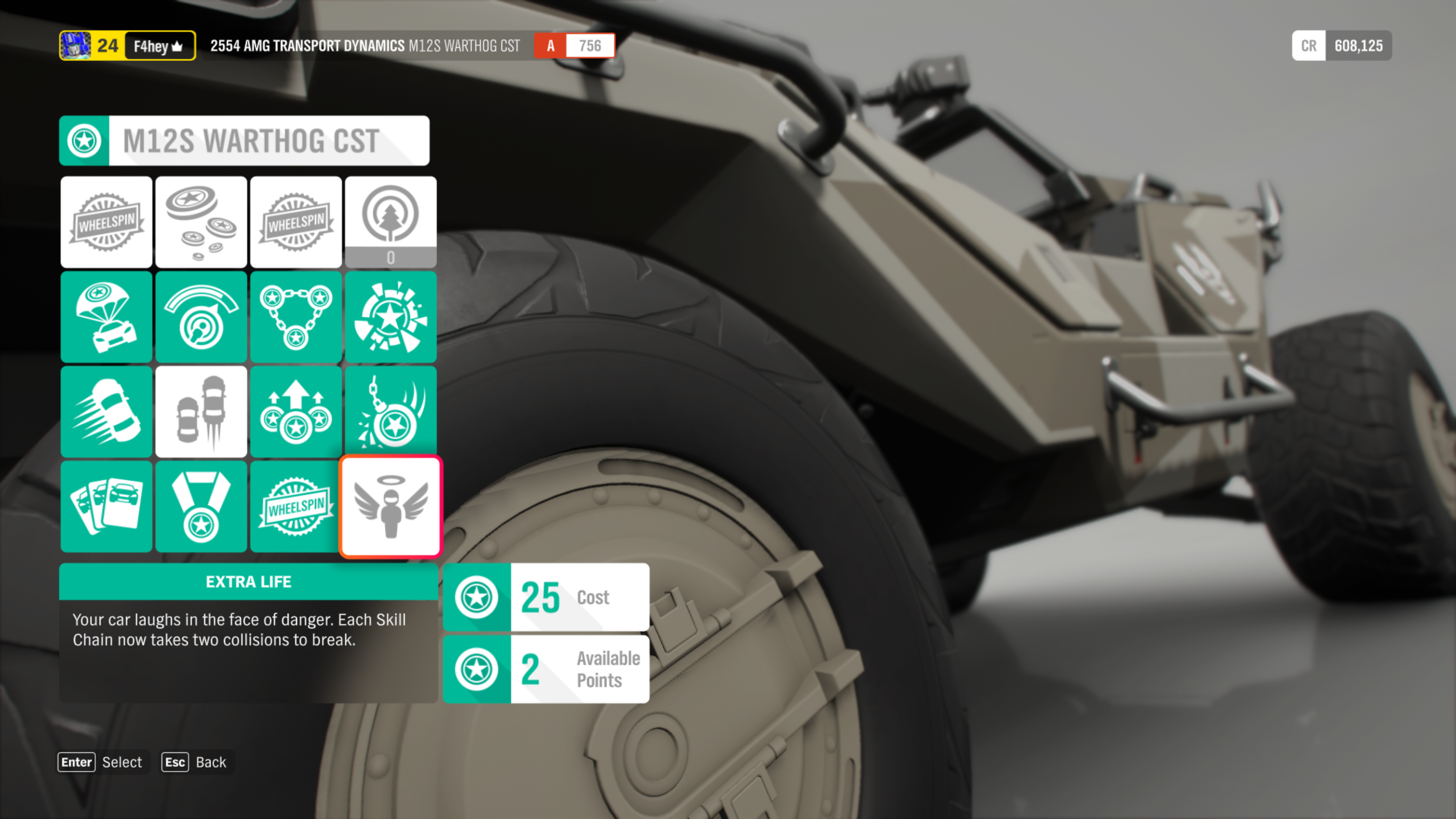