disneyentertainmentinterviewpamela ribonrich moorewreck-it ralph
To sign up for our daily newsletter covering the latest news, features and reviews, head HERE. For a running feed of all our stories, follow us on Twitter HERE. Or you can bookmark the Kotaku Australia homepage to visit whenever you need a news fix.

It all began at the D23 Expo last year. That was where Disney first played a scene from the Wreck-It Ralph sequel, Ralph Breaks the Internet, in which Vanellope von Schweetz meets 14 iconic Disney princesses at once. The clip crushed the audience of Disney super fans and has since been glimpsed here and there as moviegoers wait for the final film in November.

However, at a recent press event, Disney pulled back the curtain to reveal how the scene came to be.

According to co-director Rich Moore, the first kernel of the idea came from internal discussions about things Ralph might do on the internet. Things like taking a BuzzFeed-style quiz. “Wouldn’t it be funny if somehow Ralph was taking one of those quizzes [asking] ‘Are you an Anna or an Elsa?’ and him and Vanellope [got] into an argument over it?” Moore recalled.

Things escalated from there.

“We thought, ‘Well, wouldn’t it be funny if somehow Anna and Elsa are there?’ and that started us thinking, ‘How could we do something like that?’ Then we realised there [are] Disney fan sites and, ‘Oh my god, wouldn’t it be great to do a set piece that was all Disney?'”

The idea came into clearer focus when the film’s co-writer, Pamela Ribon, posed the question of whether Vanellope was actually a canon Disney princess. Of course, she was literally named a princess in the first movie, a movie released by the same animation studio as Beauty and the Beast, Snow White, Cinderella, and The Little Mermaid. She would qualify, right? And if so, why couldn’t she meet them? 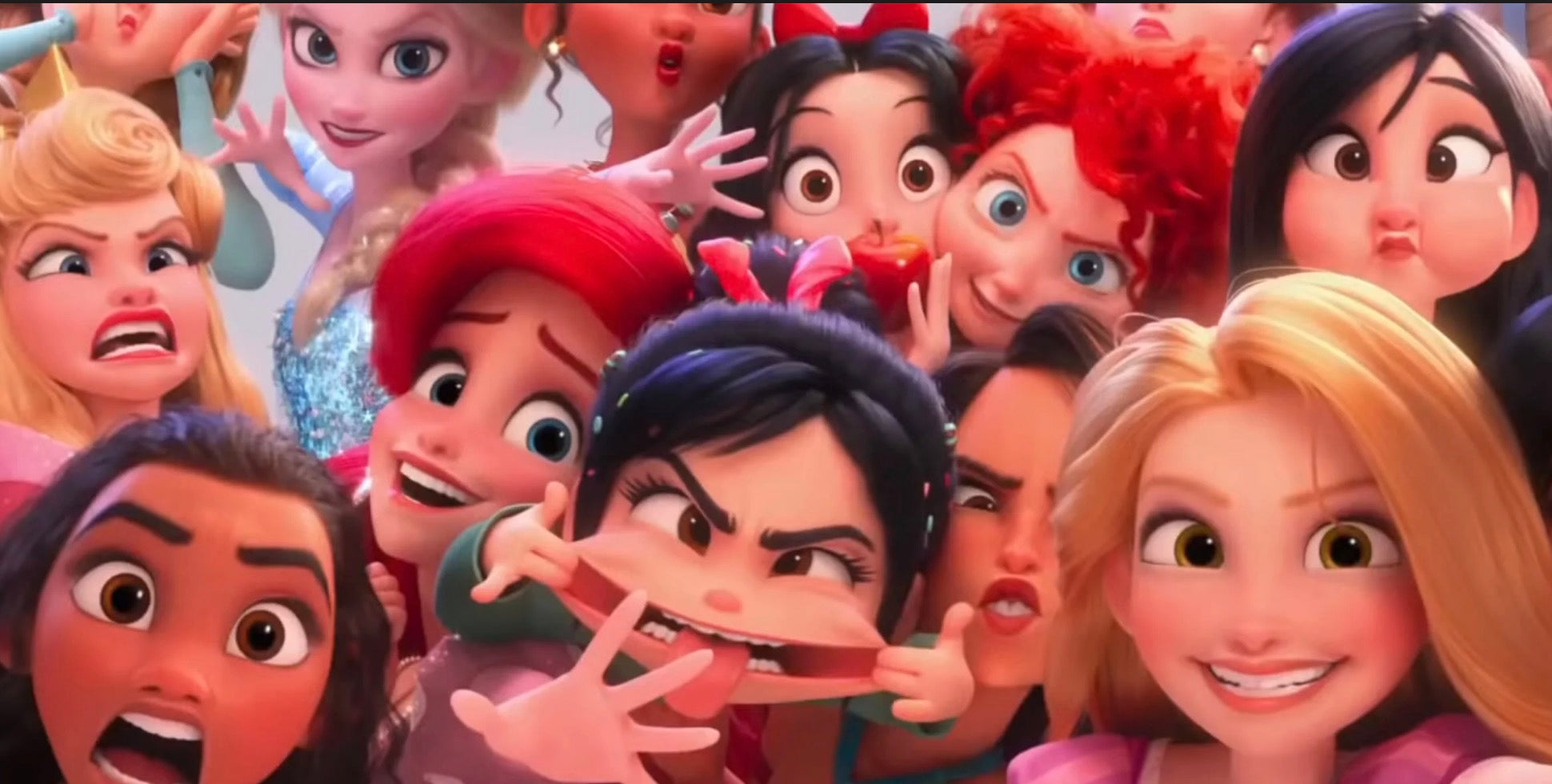 Just some princesses, having a laugh. (Photo: Disney)

“In an early version [of the movie] we thought Vanellope was going to go viral and I thought, ‘Yeah, if she met all the princesses that might break the internet,'” Ribon said. She then remembered a conversation she had with her Disney Animation colleague, Elise Aliberti, about Disney princess stereotypes, so she texted her for some advice. The two discussed points like princesses having daddy issues, needing a man to save them, making horrific sacrifices, etc.

Once Ribon had those inspirations, she started writing, diving hard into all of those stereotypes — making fun of them, but also trying to respectful. “I wrote the scene. I read it. Then I had a panic attack and I laid down on the floor,” Ribon said. “I was like ‘I’m either going to be fired or this might be a big deal.'”

Ribon got up off the floor, went into work, and pitched the idea to Moore. He told her “Let’s board it and see what happens.” So they did. When they watched it in storyboard form not only did Moore love it, everyone else on the team did too, and they put it into the production pipeline. Next, they had to show it to the rest of Disney Animation.

“It’s a tough crowd showing these scenes to Disney Animation,” Ribon said. “But people broke into applause and it was like ‘OK, this is going to D23. This is happening.'”

“It played huge,” added producer Clark Spencer. “And from that moment in time, everyone was fully behind it … because [the scene] really threads that line of ‘Where are we being satirical? Where are we being funny about ourselves?’ but also being respectful of the characters, and it really is an integrated scene in the story.”

Getting approvals was just the first set of problems. Then there was the fact most of the Disney princesses had never been visualised in 3D. Also, most of the hand-drawn characters didn’t exactly look uniform. Some were realistic, but others weren’t, so a team lead by art director Ami Thompson began to translate the characters into a modern, 3D aesthetic, making them all look like they lived in the same circa-2018 Wreck-It Ralph world.

Disney also brought in Mark Henn, a veteran animator who worked on several of the princesses’ original movies, to lend a hand with the visual details.

The filmmakers also knew the scene called for the princesses to change into more comfortable clothes. So, the entirety of Disney Animation was tasked with pitching clever, Disney themed t-shirts for each princess. In the movie, they go by in the blink of an eye — but every princess has a shirt with a fun inside joke about them.

For example, Pocahontas has a shirt that says “Blue Corn Moon,” Belle’s says “Beast Friends Forever,” Tiana’s says “NOLA,” Sleeping Beauty is “Nap Queen,” Ana’s says “Finish Each Others” on a sandwich, Elsa’s says “Just Let It Go,” Jasmine’s has the genie’s hand making a “3” with the word “Wishes” under it, and on and on. 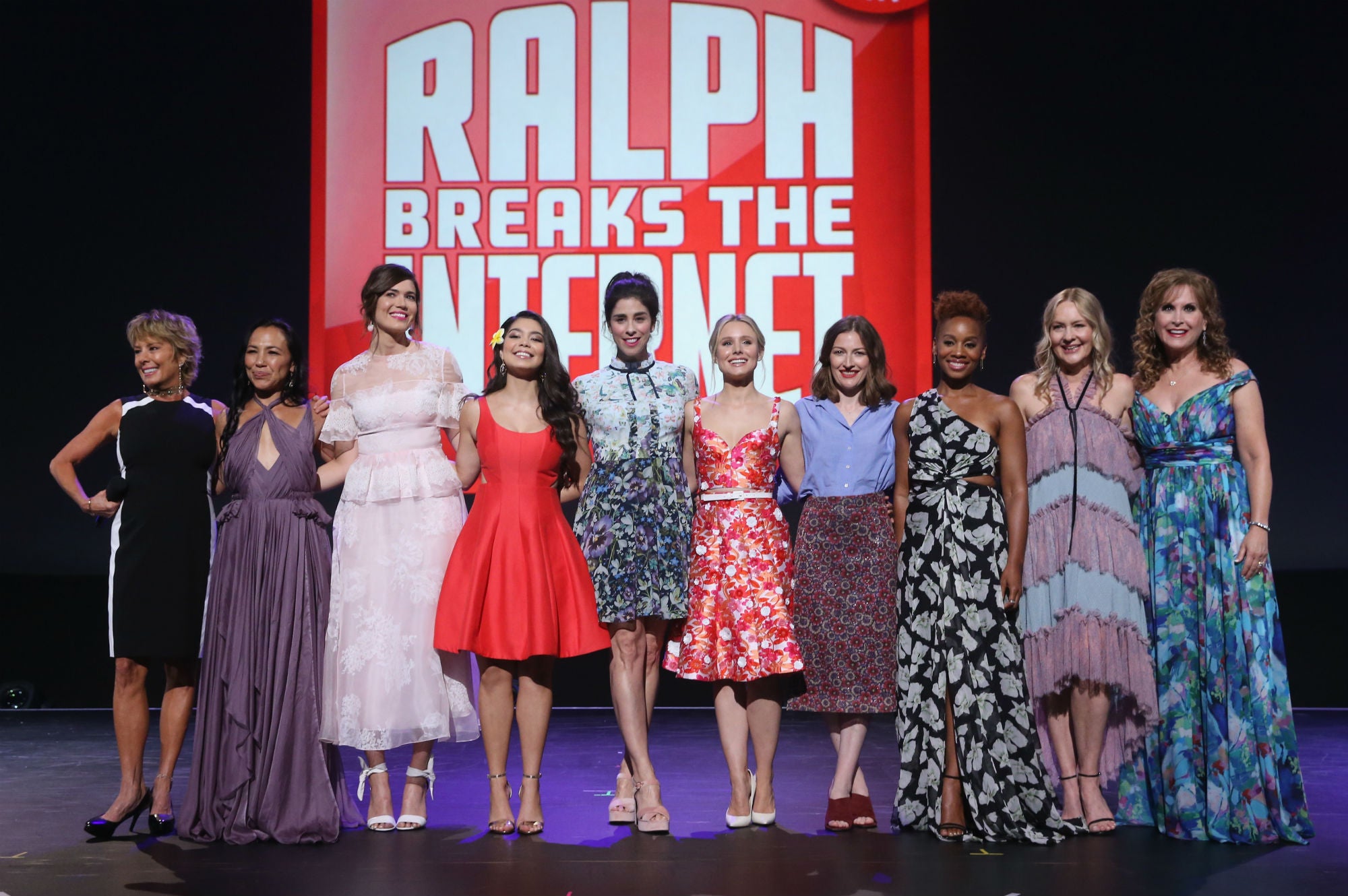 Most importantly, all the living actresses who did the original voices of the characters were brought in to reprise their roles (Ribon voices Snow White). Those actresses, so well versed in their respective princesses, helped the scene evolve even more, sprinkling it with additional personality and quirks, until it became what audiences will see in the film.

Now, you’re right if you think that seems like a lot of work for just one quick scene. To that end, Ribon hinted there may be more when Ralph Breaks the Internet opens on November 21. “You’ll see a little bit more of the princesses,” she said. “There are some surprises to come.”