In This Week’s Best New Comics, Internet Trolls And The Big Two Are The Ultimate Villains

You know that feeling you get when someone with an egg avatar slides into your DMs at 3 a.m. to tell you how much they wish you didn’t exist, and you wonder to yourself, “Who the is this person and what the hell is wrong with them?” Of course you do. So do the heroes of this week’s best new comics. 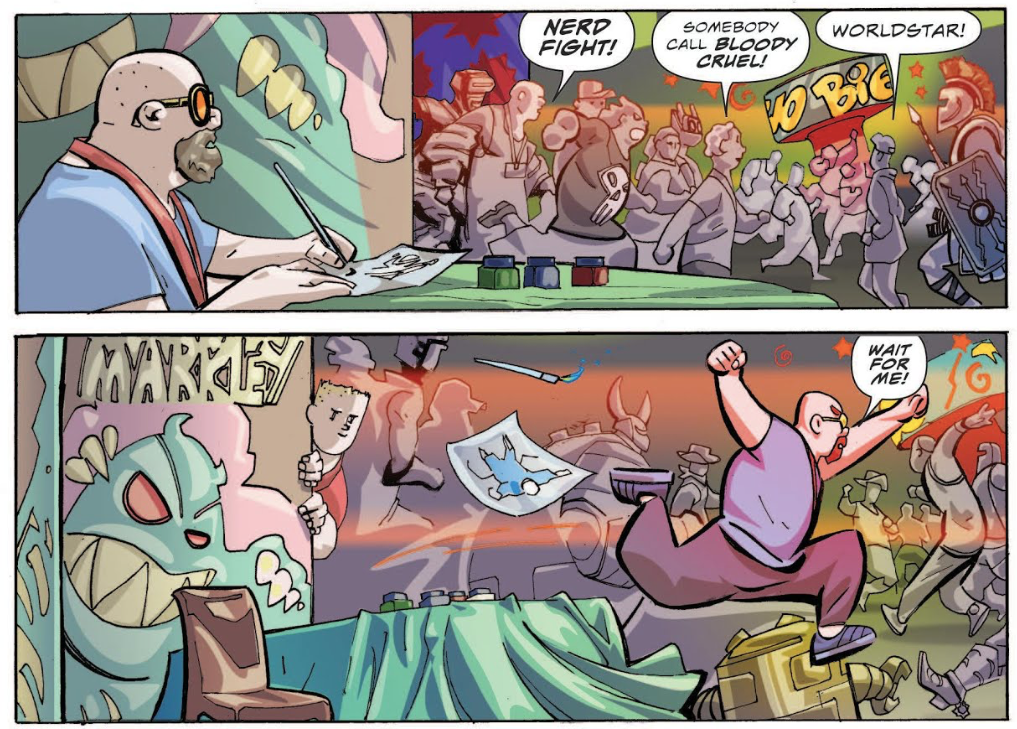 Revenge of the Fanboys

If you’ve ever been to a comic book convention, you know that as fun as the events can be, there’s also a point at which they can become rather exhausting—in no small part because of the massive crowds of overexcited people who don’t know how to act in public.

Revenge of the Fanboys, a Kickstarted indie project from Daniel Gordon, Adrian Sybar, and Micah Myers, tells the story of Jack and Todd, two friends who make their way to what might as well be San Diego Comic-Con to take in the sights, grab some swag, and have a good time.

Like all con-goers, the pals make the best of a generally hectic situation, but their experience takes a turn for the extraordinary when they stumble upon a document revealing that the, ahem, Big Two publishing house is planning to sell all of its intellectual properties to a nefarious Hollywood studio. When the Jack and Todd realise that the studio plans to shut down the biggest comics publisher in the industry entirely and prohibit creators from producing any art featuring their characters, they resolve to set out and find the powers that be who just might be plotting the end of comic books. (Daniel Gordon, Adrian Sybar, Micah Meyers)

Michael Blackburn having a chat with the man who’s been sent to torture him. (Image: Warren Ellis, Jason Howard, Image Comics)

One of the scariest things about the idea of space travel and off-world colonies is the chance that people will become disconnected from their homeworlds. Even if a colony’s able to survive, there’s no telling just what kinds of lives its inhabitants might begin experience, especially if the small society’s power structures become dominated by malevolent, fascistic people.

Image Comics’ Cemetery Beach, from writer Warren Ellis and artist Jason Howard, images a universe in which Earth’s first off-planet colony was secretly established in 1930 and, over generations, has become something of a futuristic hellscape controlled by corrupt, brutal leaders. When people on Earth discover the colony’s existence, Michael Blackburn is selected to travel there in order to get the lay of the land before more direct contact is established. (Warren Ellis, Jason Howard, Image Comics) 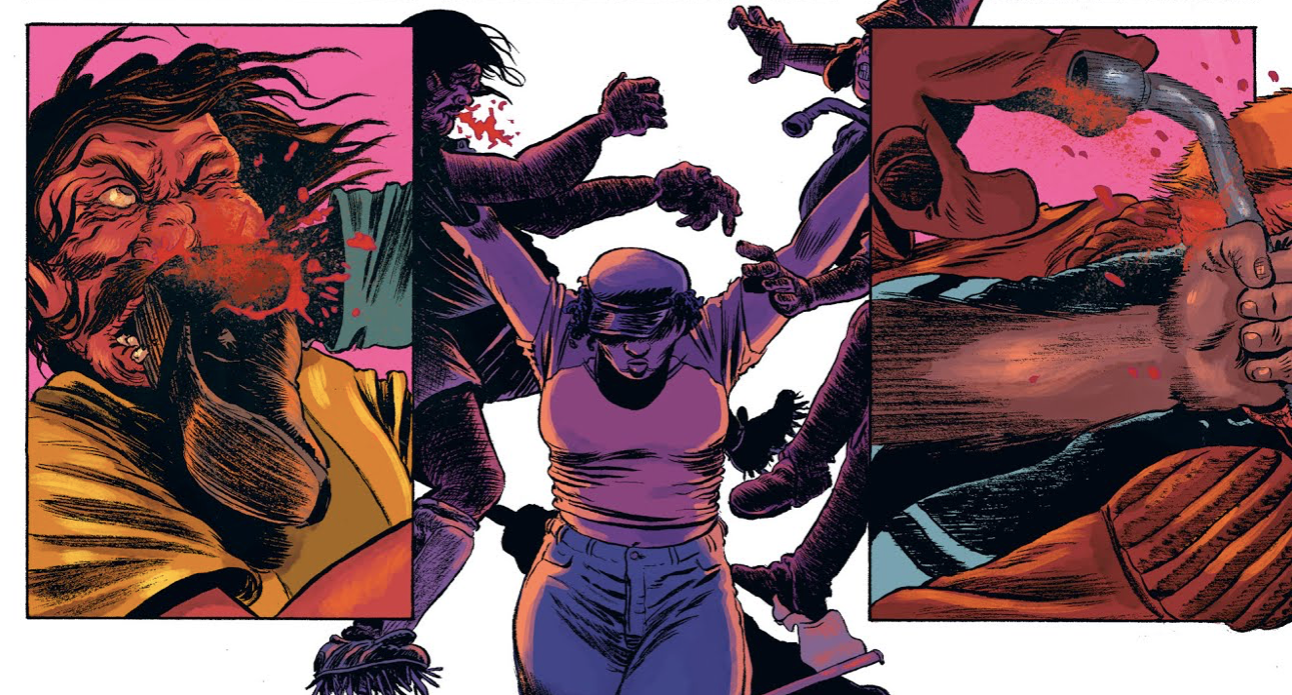 Every New York City cab driver has a million stories to tell about all of the wild things they’ve seen while shuttling fares to and fro across the city. In Image Comics’ MCMLXXV, from writer Joe Casey and artists Ian Macewan and Brad Simpson, Pamela Evans’ stories are decidedly more fantastical. Pamela keeps an enchanted crowbar with her at all times—because, unlike other cabbies, she has a penchant for crossing paths with the kinds of demons that thrive in the shadowy corners of the city’s alleyways.

Even more than her fighting skills and athleticism, the thing that keeps Pamela and her passengers safe is her deep understanding of NYC and how to navigate it—something conveyed by Macewan’s lush, detailed, and appropriately grimy illustrations. (Joe Casey, Ian Macewan, Brad Simpson, Image Comics) 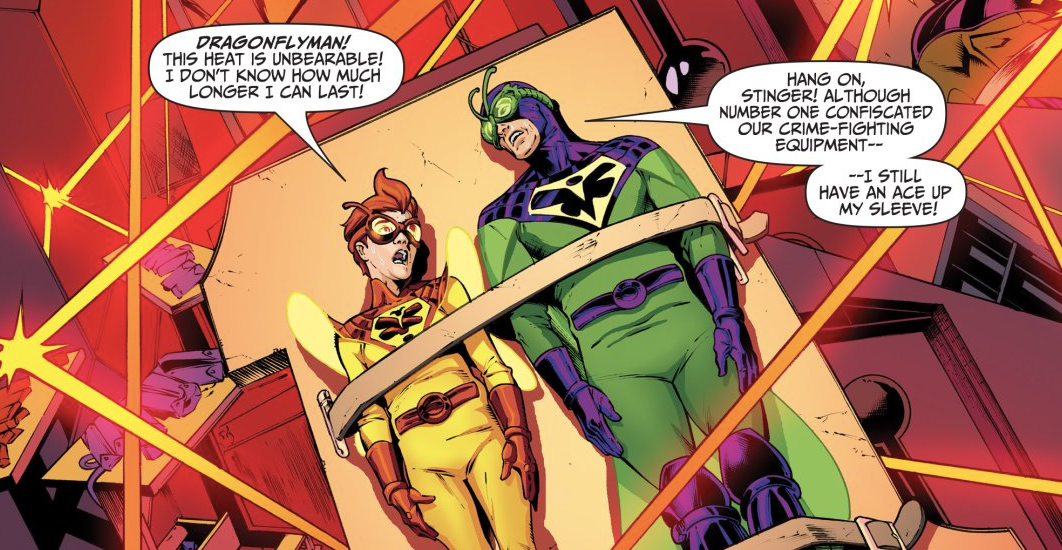 Comics set in alternate universes where familiar heroes are darker, more violent versions of themselves are a somewhat stereotypical at this point. But Ahoy Comics’ The Wrong Earth—from writer Tom Peyer and artists Jamal Igle, Juan Castro, and Andy Troy—does something interesting with the conceit.

Dragonflyman and the Dragonfly are two versions of the same hero from alternate Earths. In Earth Alpha, Dragonflyman and his sidekick Stinger fight crime as a campy duo of heroes reminiscent of the Adam West Batman era. Earth Omega’s Dragonfly, on the other hand, is a violent vigilante whose rogues’ gallery is filled with darker, much more sadistic criminals. The heroes are more are comfortable in their respective realities, but their lives are upended when they suddenly switch places and are forced to reckon with what it’s like to be fundamentally out of place in the larger world. (Tom Peyer, Jamal Igle, Juan Castro, Andy Troy, Ahoy Comics) 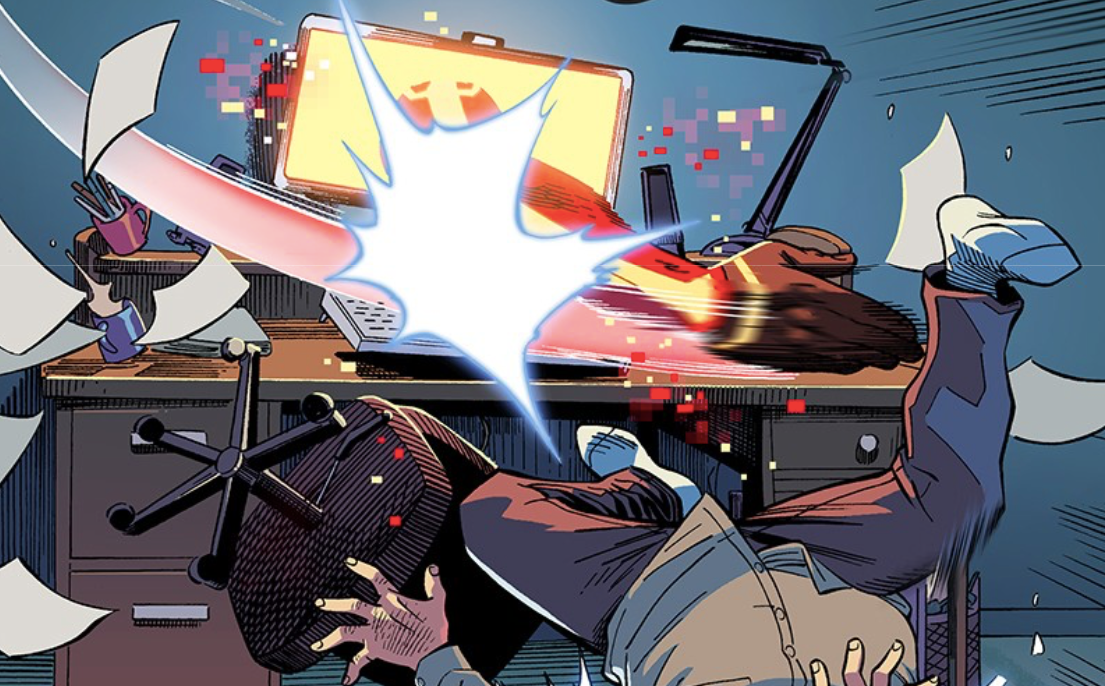 Outrage slapping the shit out of someone through a computer. (Image: Reilly Brown, Line Webtoon)

If you are a person who regularly uses the internet, then it’s probable that at some point in your life, someone—be it a rando on social media or a troll from the comments section of a blog—has gone out of their way to harass you for their own enjoyment.

In those moments, most people would relish the chance to reach through their computers and slap the hell out of anyone who would have the gall to talk smack (or worse, sexually harass or threaten them). Unfortunately, we simply don’t have the technology for that yet—but the titular hero of Outrage, from Deadpool co-creator Fabian Nicieza and artist Reilly Brown, does.

The premise is simple and straight to the point: Outrage scours the internet for people who revel in trying to intimidate others and shows them what’s what. Sending unsolicited pictures of your genitals to strangers? Slap in the face. Spewing racist vitriol at people for fun? Slap in the face. Screaming misogynistic nonsense at women? Slap! Slaps for any and everyone who doesn’t understand how to leave people the hell alone and keep to themselves if they insist on being arseholes. (Fabian Nicieza, Reilly Brown, Line Webtoon)