Luke Cage’s impenetrable skin and super strength make him one of the most powerful brawlers in Marvel’s comics universe, but years of throwing himself at villains has led to a devastating problem for the hero — as well as one of his most interesting storylines yet.

Luke’s best known as the better half of the Heroes for Hire and for occasionally making a guest appearance with the Avengers. But lately, his life has become decidedly more grounded. In Anthony Del Col, Jahnoy Lindsay and Ian Herring’s Luke Cage, he’s stepped up to the plate on the home front to take care of his daughter Danielle.

While Jessica Jones is off doing the hero thing again, Luke’s on daddy duty. This means spending a lot more time in Harlem on the ground level, where he’s able to really have a presence in the neighbourhood that gives everyone an increased sense of safety.

Though Luke has his hands full with Danielle and little desire to wander too far from her, he’s approached by Kenneth Newton, chairman of the Harlem Healthcare hospital, who’s in need of Luke’s services. 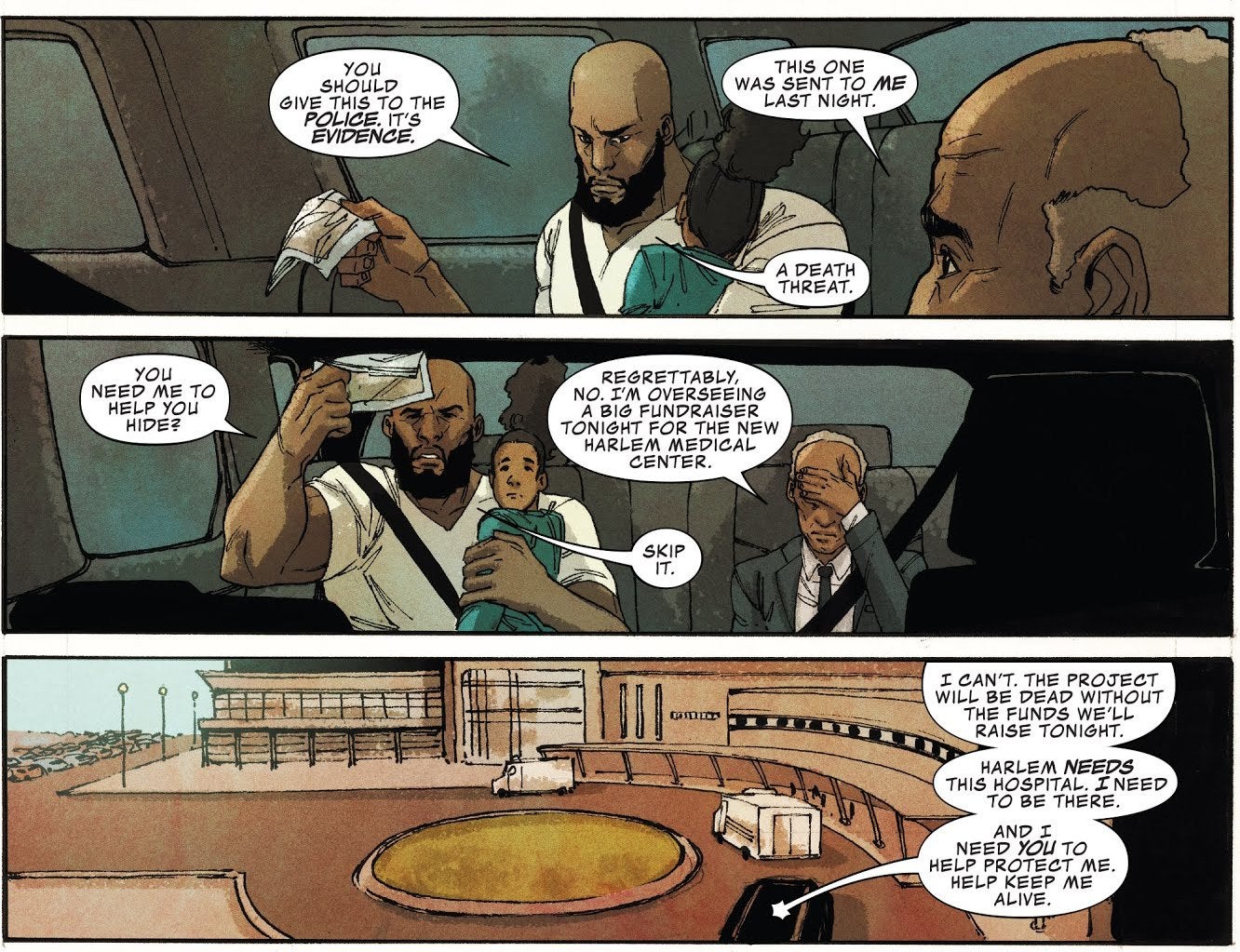 Despite the fact that he’s received the same death threats that preceded the sudden deaths of two of his colleagues, Newton plans on attending an important fundraiser for the hospital, where he’s confident he’ll be able to secure enough money to build a badly-needed new medical centre.

It’s suspected that whatever killed Newton’s colleagues could be some sort of biological agent, but it’s just as likely that they were assassinated through more traditional means — so Luke agrees to act as his bodyguard at the fundraiser.

Through no real fault of Luke’s, Newton doesn’t survive the night and ends up vomiting blood as he dies on stage during his speech. One of the few people Luke suspects may be behind the deaths happens to show up at the fundraiser just as Newton collapses, and Luke makes a point of trying to interrogate him, only to be cut off by two of the man’s own bodyguards.

Luke ends the ensuing fight quickly and with an uncharacteristic level of viciousness that shocks him, and leads him to wonder whether he’s become infected with whatever killed Newton and the others. When Luke realises that he’s forgotten his daughter’s name, he seeks out medical help to determine just what’s wrong with him.

While all of his vitals check out normally, a doctor informs him that he’s beginning to show the earliest signs of chronic traumatic encephalopathy (CTE). It’s a real neurodegenerative disease caused by sustained trauma to the head, and you may already be familiar with it in connection to events within the NFL.

Over time, CTE can lead to mood swings, cognitive issues and, in some cases, dementia. One of the things which makes the condition so dangerous is that is usually doesn’t begin to manifest until years after the initial injuries. At this point, the only way to properly diagnose the disease is by testing brain tissue from an already deceased person. 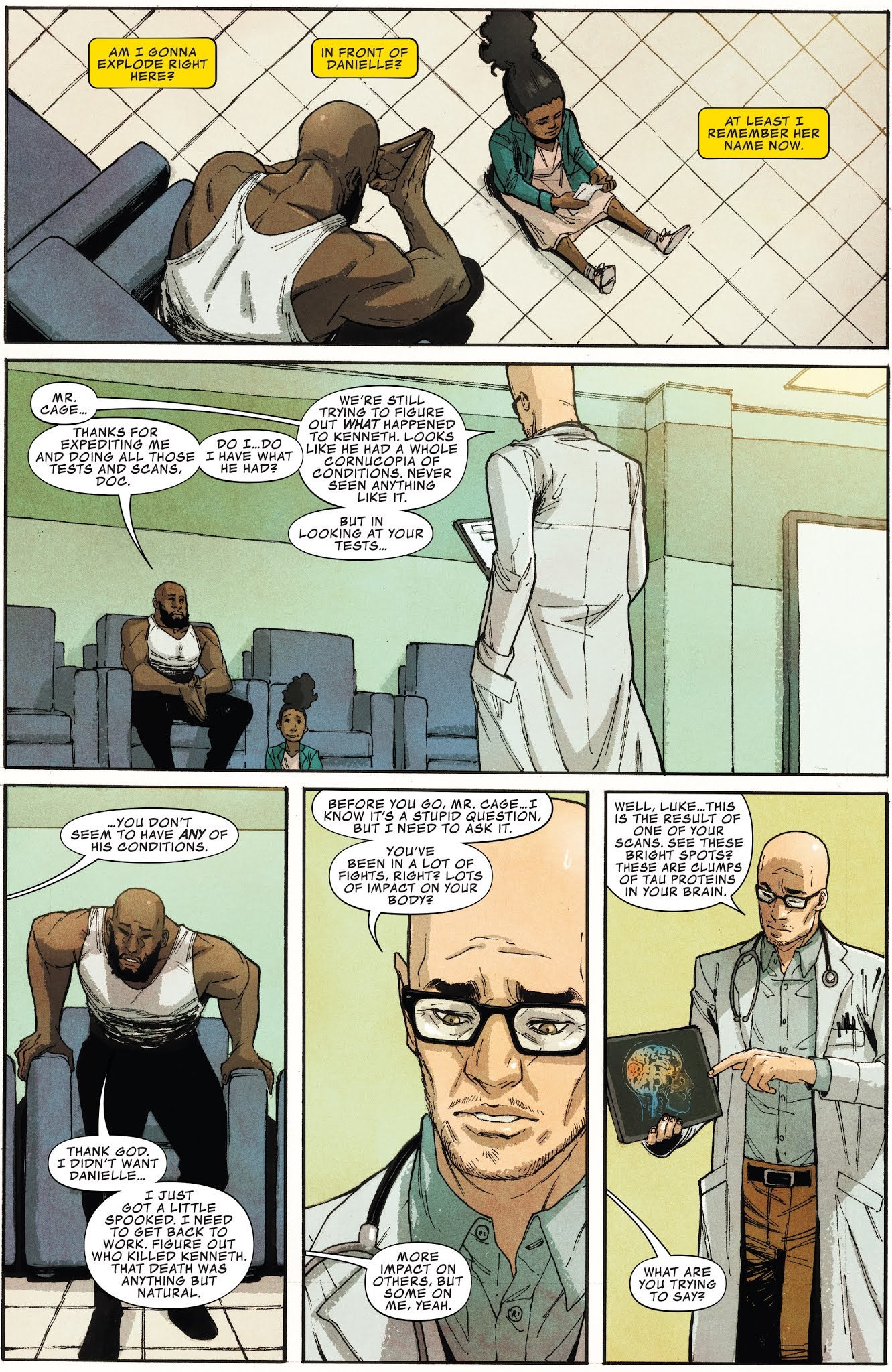 The strain put on the US healthcare system is a major theme in this Luke Cage comic that feels very of the times, and introducing this particular medical dilemma adds an interesting new part of Luke’s identity that’s worth deeper exploration.

Luke’s strength and his ability to take a punch have never been the most interesting things about him because, relatively speaking, those powers are fairly common. They really only become fascinating in a story such as this that frames them in a new context.

Luke’s desire to protect Harlem and the people he loves more often than not manifests in him bearing incredible amounts of physical and emotional weight on his shoulders that often goes unaddressed and unexamined. Luke’s as strong as the situation calls for, and because he’s committed his life to protecting others, there’s a degree to which he can never really be all that vulnerable or in a position to take care of his own personal needs.

Rather than simply taking his powers away altogether in order to force Luke to heal in the larger sense, his CTE diagnosis makes him take a hard look at the kind of life he’s led and what kind of future he wants for himself and his daughter.

Of course, this is a mainstream comic book, and it’s more than likely that by the time this arc finishes out Luke will have miraculously found a way to be cured of his condition. But for the time being, Luke Cage is doing something new and important by putting CTE in the spotlight in order to spread information about what it is and how to prevent it.