Neo Geo Mini Is Cute, But An Imperfect Nostalgia Trip

Neo Geo, as a brand, has always seemed to be about extravagant, weird ideas. First it was an arcade machine that used cartridges, then a wildly expensive home machine released in 1990, now a mini-console with its own screen and a tiny joystick for a controller.

As a novelty item, Neo Geo Mini has an undeniable coolness to it, but it’s hardly the most optimal way to experience these games.

For the last few days, I’ve been playing around with the Neo Geo Mini’s “International Version,” which just went up for preorder on Amazon and Gamestop.

Here’s the elevator pitch: Neo Geo Mini is a self-contained unit in the shape of a Japanese sit-down arcade cabinet that lets you play 40 Neo Geo games on its tiny screen, using a tiny joystick and buttons. Plug in an HDMI cable and you can output the games to your TV. Plug in a control pad (sold separately) and you don’t have to use those tiny buttons.

All these things are true, and if you just want to casually play some Neo Geo classics like King of Fighters ‘95 and Samurai Shodown II while staring at a colourful piece of shelf candy, this might be the Mini for you. But every element of Neo Geo Mini comes with a caveat, an inconvenient “well, but…” wrinkle that might ding the experience for you. 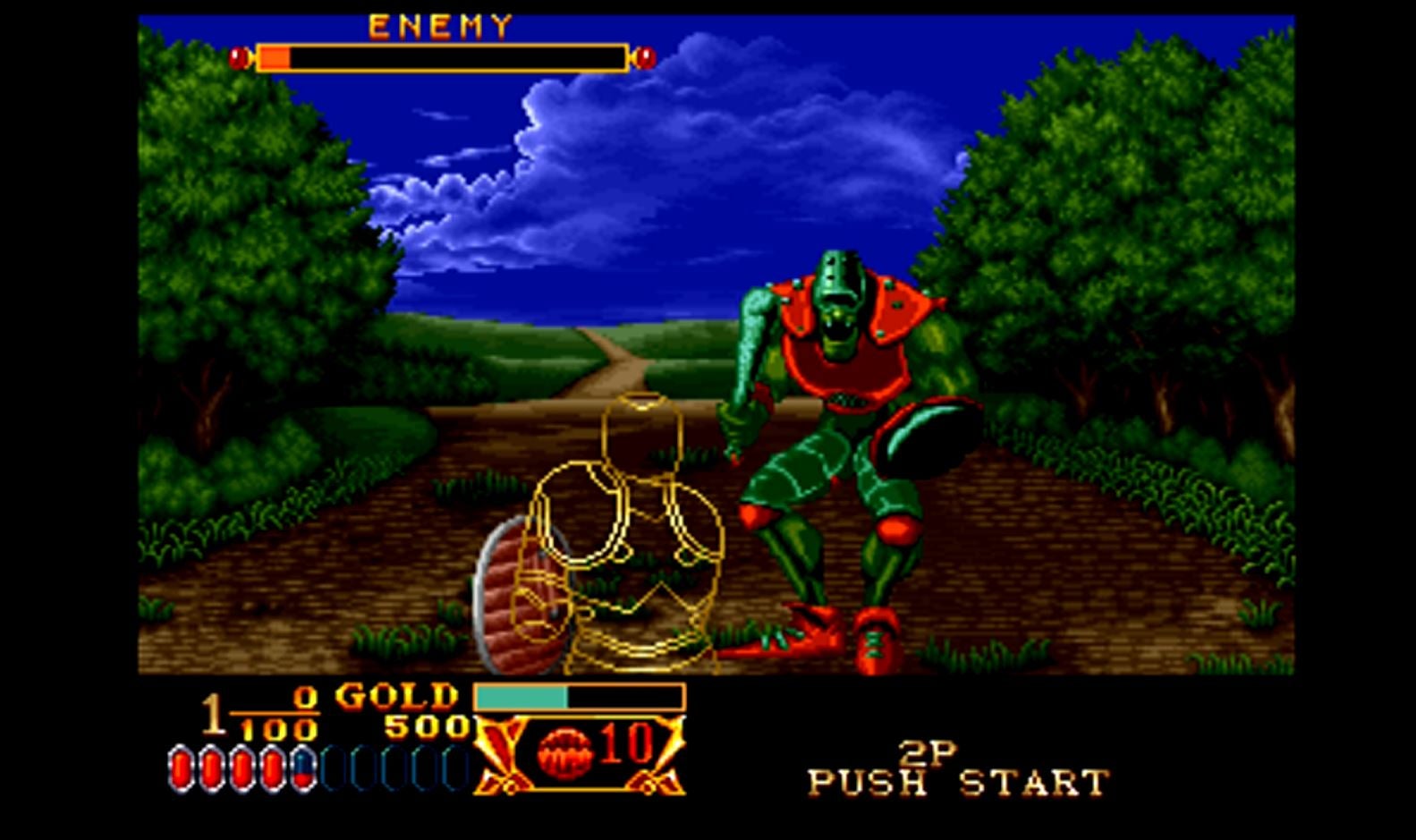 Screen capture of the Neo Geo Mini running the game Crossed Swords, as displayed via HDMI on a television in the system’s 4:3 display mode. (Screenshot: SNK, Kotaku)

I should say first that the self-contained experience, the tiny screens and joystick, is more playable than I expected it to be. I wouldn’t recommend it for extended sessions and I certainly wouldn’t bring this thing to EVO to use as my controller. For casual play, however, it’s pretty comfortable, whether you’re resting it on a table or just holding it all in your hands for maximum awkwardness.

The LCD screen is bright and sharp. Since it doesn’t have a battery, you’ll still need to plug it in via the included USB-C cable to get power, whether from an external battery or the good old wall.

If you want to use Neo Geo Mini as a TV game machine, prepare to pay more money. The unit itself costs $US109 ($152), which is already on the expensive side of the price range for mini retro consoles (the NES Classic costs $99; the SNES version costs $119 and has two controllers).

Extra controllers, in black or white, cost $US26 ($36) each. And you’ll also need a mini HDMI cable, not a standard-sized one, to output to the TV, so that might incur another cost.

The control pads are based on the ones that came with the Neo Geo CD console back in the day. They are pretty solid and have lengthy cables, making the experience much more comfortable whether you’re playing on the small screen or a big one. There’s a digital thumbstick instead of a D-pad, which seemed fine to me for throwing whatever version of a Hadoken the main character in any of the Neo Geo’s fighting games uses.

The biggest drawback comes when you connect Neo Geo Mini to a TV. Instead of presenting the graphics in a sharp-edged, pixel-perfect fashion, the standard display mode is blurry.

Granted, this is probably closer to what it looked like on CRT televisions, but it’s also not what most people expect from a retro console. I need those beautiful hard edges!

There’s an “image optimisation” toggle in the menu, but that just turns on one of those Photoshop-style filters that gives the image a sort of hand-drawn look. 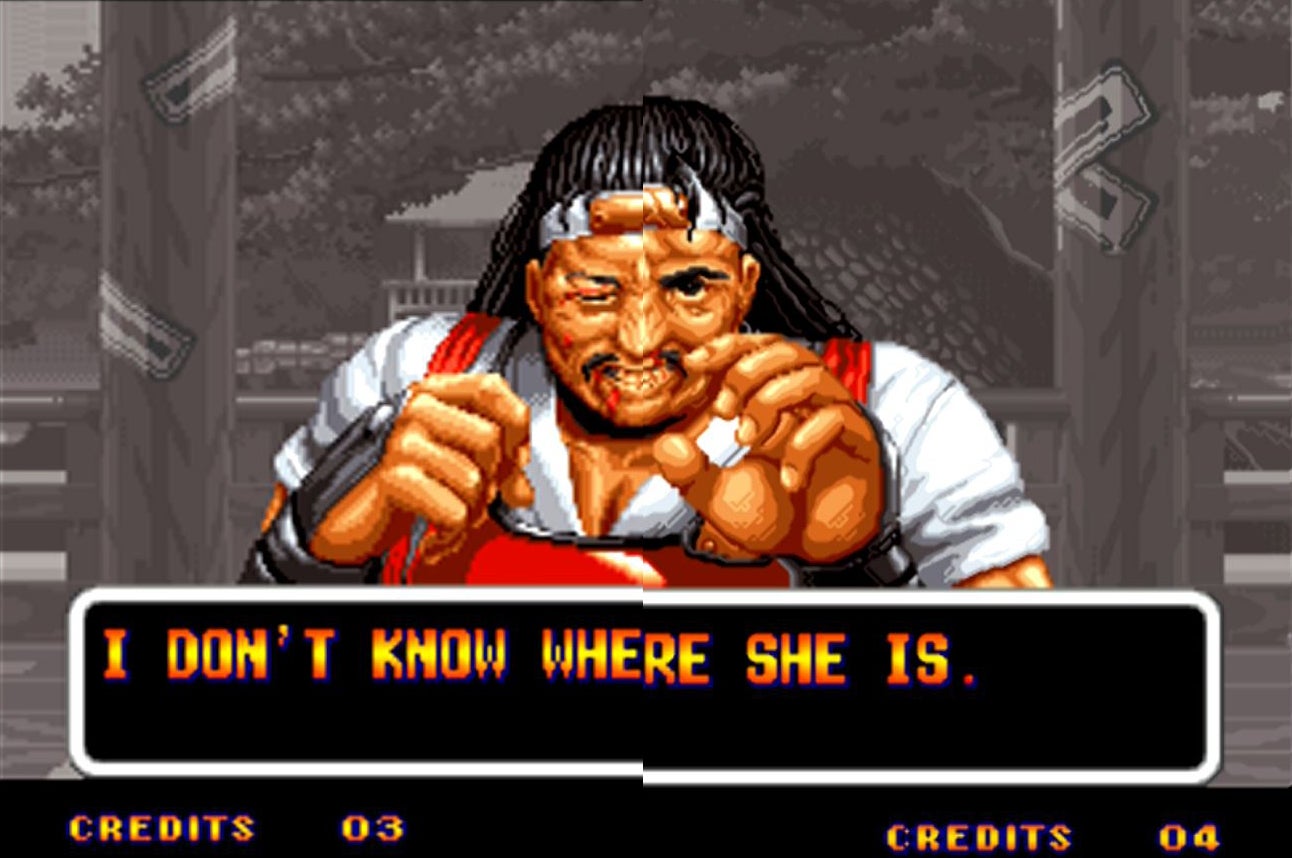 In fact, the options in the menu are basic across the board. You can press the Start and Select buttons at any time to go to the system menu, where you can save and load your position in each game with four save slots each. When the unit is disconnected from the TV, you can use the menu to adjust the screen brightness and volume.

When it’s connected via HDMI, you can make some rudimentary adjustments to the screen size, including switching between widescreen and 4:3.

I found out the hard way that the Mini doesn’t actually support the original memory-card saving functions that were built into the original hardware.

At points where you could save your game to a memory card, the prompt will still come up, and you can save and load your game as usual. But if you turn the system off, that saved game will disappear. That means you should use the Neo Geo Mini’s menu to save your progress.

Now all you need to know about the Neo Geo Mini are what 40 games are on it. Here they are. For your convenience, I’ve split it up into the two major categories of Neo Geo games. 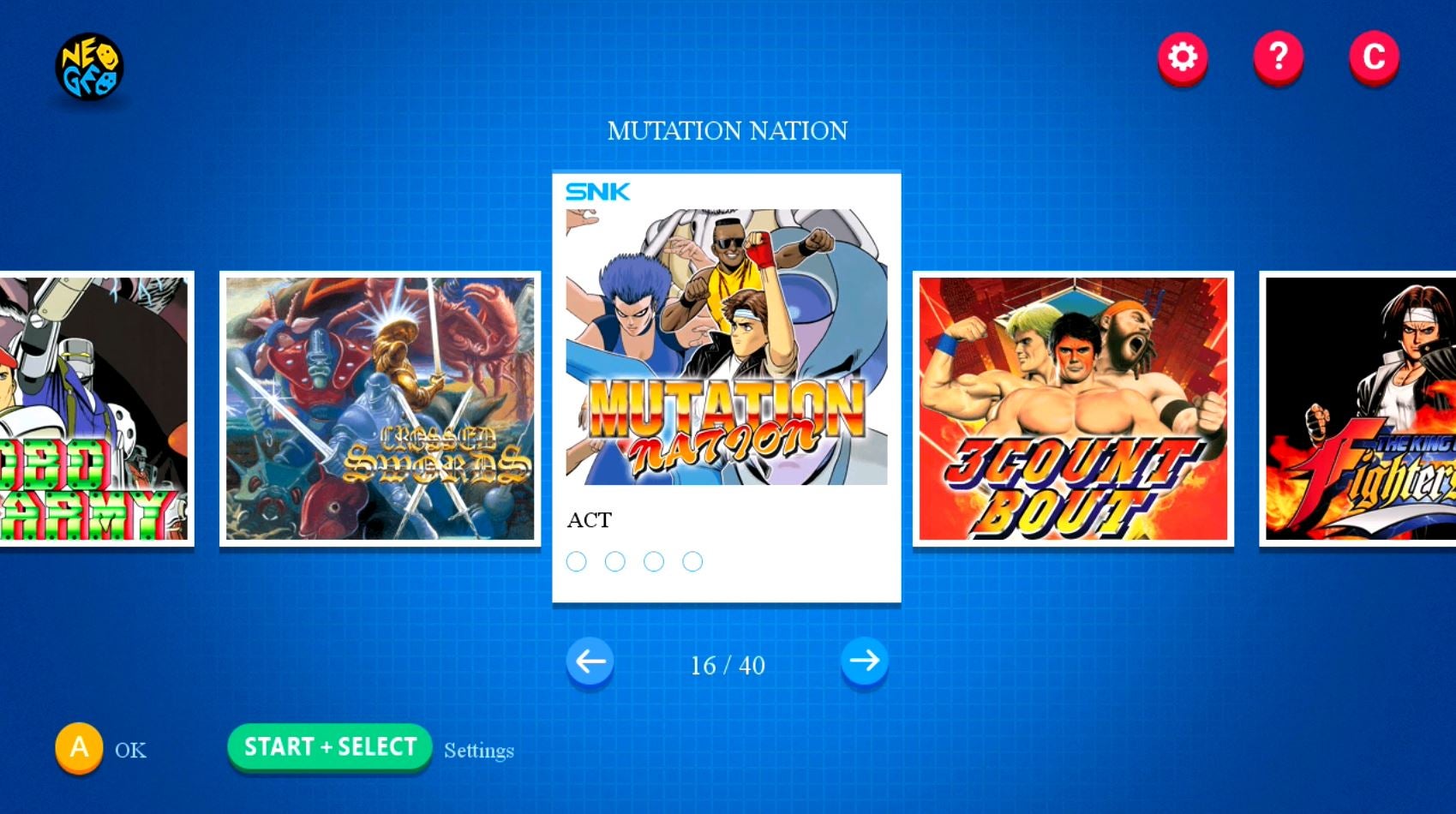 Neo Geo Mini’s menu screen is nothing special, but gets the job done. (Screenshot: SNK, Kotaku)

That’s 16 one-on-one martial arts fighting games and 24 not, which is actually a pretty good ratio if you know the Neo Geo library is mostly renowned for SNK’s many fighting game series.

I wish the original Fatal Fury, World Heroes, and Samurai Shodown were included here, as those are the games I best remember playing in the arcade and and again when they were ported to the Super Nintendo back in the day.

The lineup could have been better had SNK been able to secure some of the better third-party games, rather than just its own content: Puzzle Bobble or Bomberman Panic Bomber could have rounded things out a little, or the cult favourite Windjammers. 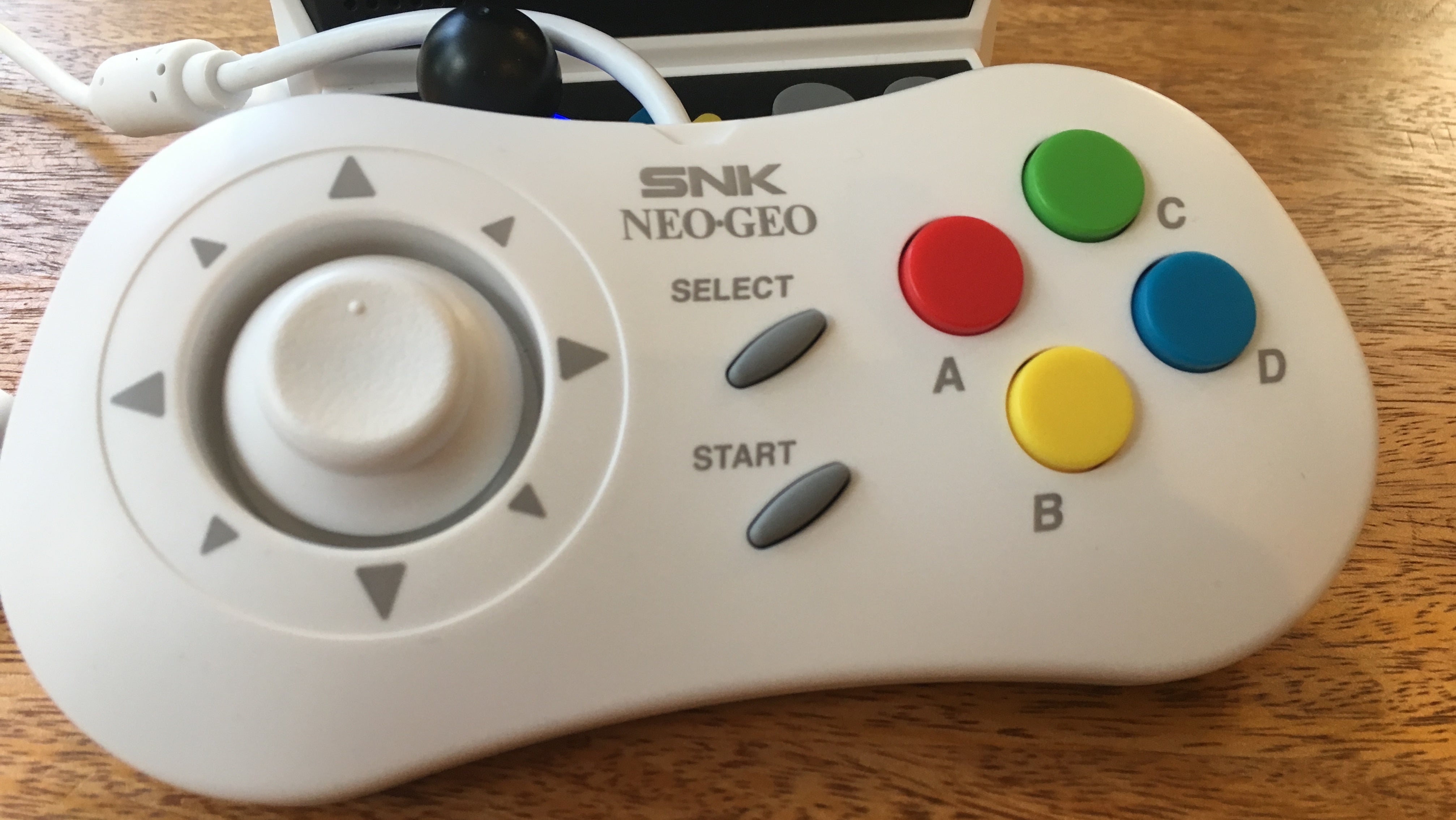 There is, at least, a good mix of genres: shmups, sports, platformers, puzzles. I appreciate the effort on SNK’s part to make this more than a fighting game machine—although, if we’re being honest, few of the company’s non-fighting games are exactly considered standouts in their fields.

Sengoku 3 is a better side-scrolling beat-em-up than Mutation Nation, for example, but neither of them are exactly Streets Of Rage-calibre.

That’s the Neo Geo Mini, a device that’s a bit more useful than your standard novelty miniature arcade machine, but a bit too unwieldy to be the best way to experience Neo Geo. On the scale of “cold weenie” to “real hot dog,” I’d rate it about an “Oscar Mayer.”