No, Master Chief’s Suit Does Not Jerk Him Off

An erroneous piece of Halo lore began with a joke by the Twitter account dril, posted on 12 May 2017: “my main issue with ‘master chief fucks cortana’ is if you read the halo novels youd know the space suit automatically jacks master chief off.”

By the next day, Halo fans had begun circulating a page purported to be from Eric Nylund’s Halo novel, The Fall of Reach. The excerpt on this page appears to back up dril’s assertion. Too bad it’s a clever fake.

In the page, Dr Catherine Halsey addresses the “benefactors” of the Spartan-II program, which developed the armour and power-ups for super soldiers such as Master Chief and also the AI technology for his companion Cortana.

In the middle of Halsey’s explanation, one of the benefactors interrupts to ask, “Am I seeing this right? The groin region packs a sexual stimulant, designed to reduce combat stress…” Halsey answers by confirming that the suits contain this supposed stimulant. 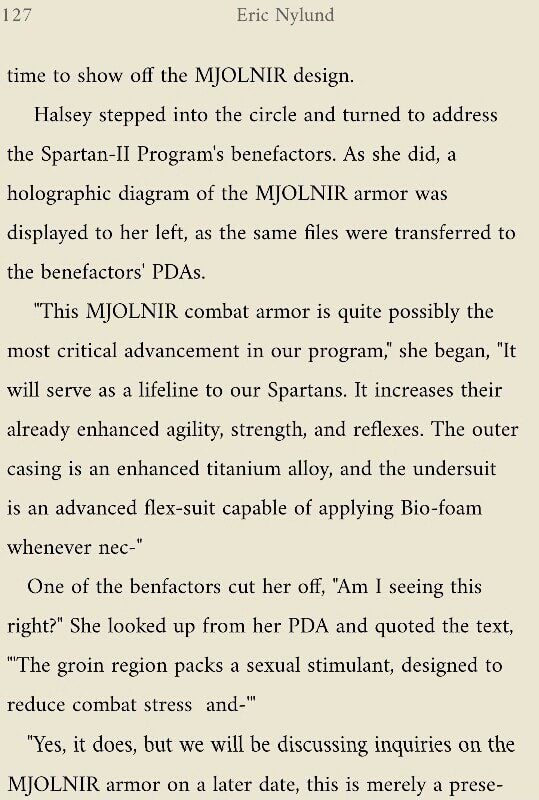 This page first appeared on the meme website iFunny by the user “Revolver”, who could not be reached for comment. Before posting the page, Revolver posted a screenshot of dril’s tweet with the caption, “I’ll go find the page where this is addressed in Fall of Reach and make a lore post later about it.”

Revolver’s next post, captioned “Halo: Fall of Reach“, is the full page, complete with page number and Eric Nylund’s name at the top. It looks real, except for the part where “Bio-foam” shouldn’t be hyphenated, but that didn’t stop people from believing the hoax.

Once the page had made the rounds on social media that day, Revolver posted the screenshot again and set the record straight with a much longer caption: “THESE ARE FAKE YOU GULLIBLE MOTHERFUCKERS. THIS ISN’T REAL. I’ve failed as a Halo account if 500+ people actually thought Cortana jacks off Chief in his suit… and judging by those comments many people did… had to ruin the joke it went on too long.”

Revolver’s retraction didn’t take. Thousands of users across social media platforms have kept the hoax alive, intentionally or not.

Five months ago, Tumblr user gurlukovich posted, “if master chief’s suit jerks him off, then samus aran’s suit should also jerk her off,” racking up thousands of responses.

Since the original post, Revolver seems to have made peace with his memelord status. In July 2017, he re-posted the page in seriousness, writing, “Reminder that Chief’s suit canonically jerks him off.” In November 2017, he posted it again and described it as “canon”.

The excerpt works because it does seem plausible. There are several dozen Halo novels, and Fall of Reach has had multiple editions. The book first came out in 2001, and in 2010, the book got re-released with additional details added. Anyone who wanted to preserve this rumour could say, “It isn’t in your copy because it’s in the other edition.” 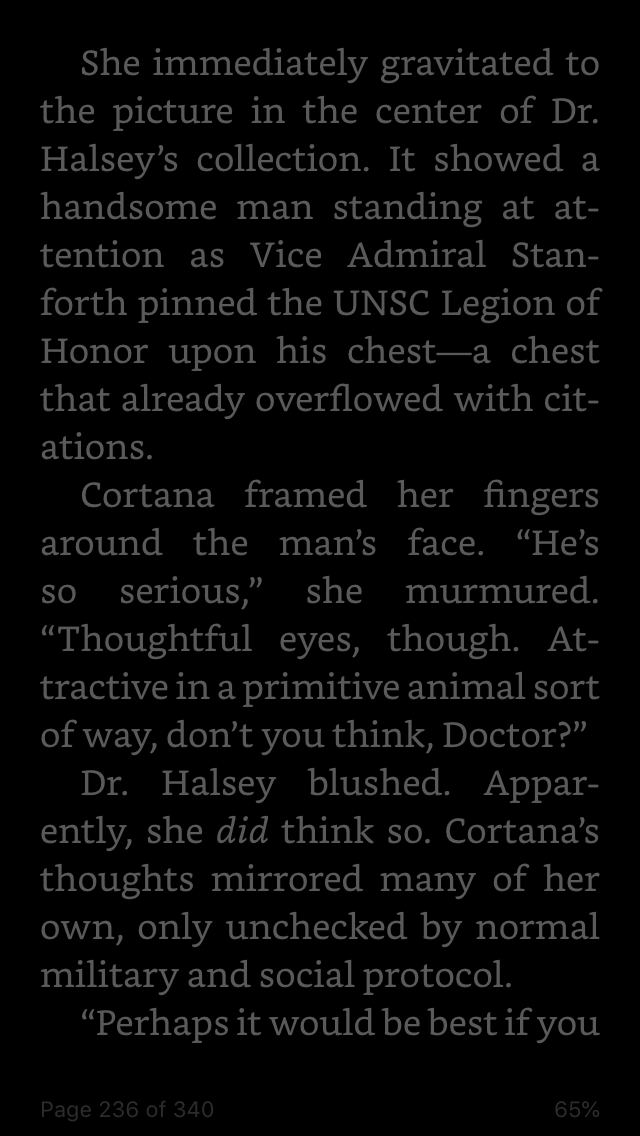 Reach also includes the moment when Cortana first sees Master Chief and decides she wants him all to herself. In this section, the Chief gets described as “handsome”, and Cortana and Halsey take a moment to marvel over how attractive they both find him.

The Fall of Reach is no bodice-ripper, but it’s just sexually charged enough that it seems possible for the book to include mention of a “sexual stimulant”.

At least one other Halo novel has answered an important question about the soldiers’ nether regions. Halo: Glasslands by Karen Traviss includes this detail: The suits collect and recycle the soldiers’ urine into drinkable water.

In the book, Naomi-010 explains, “I’m catheterized. Another reason why that machine has to be so precisely calibrated. This suit plugs into me in a lot of places.” She doesn’t specify any of the other “places”.

This detail hasn’t yet appeared in a Halo novel, but it also isn’t contradicted by any part of the Halo canon. When asked to “confirm or deny” the rumour of Master Chief’s sexual stimulant, 343 Industries writer Jeff Easterling joked: “Johnson’s not the only one who knows what the ladies like” (a reference to Johnson’s line in Halo 2).

There’s still room here for the Halo team to fill in this particular plot hole, and now, we know the Spartan suit has plenty of plugs to spare.