One Part Of Hyper Light Drifter’s World Still Haunts Me

I’ve played Hyper Light Drifter a few times now, and I always start by going North. I’m drawn by the chilly, snow-covered peaks. But once there, this particular dead and lonely world rocks me to my emotional and spiritual core.

Hyper Light Drifter came out on Switch Thursday, two years after its original PC release, and I couldn’t resist dipping back in, just as I have every other time it’s arrived on a new piece of hardware. Between the beautiful and riveting world constructed by Heart Machine and the game’s hypnotic, synth soundtrack by Disasterpeace, it gets me every time. No matter what else I’ve been playing, what other worries are on my mind, or what mood I’m in, the second I start a new game everything else melts away.

Hyper Light is a game bereft of voices and words, where everything is obliquely suggested by the music, visual cues, and twitchy, arcade game violence. Rather than explain itself, what the player are supposed to be doing, or what happened to its world to make it feel like a crumbling graveyard, the game simply leaves a gallery of evocative moods and weird environmental details to be picked through. I always head North first because its sparsely-populated slopes and staircases echo the game’s tragic feel. Most of the enemy sections are underground, so the North’s peaks let the loneliness of the world set in, a void my presence was meant to fill. 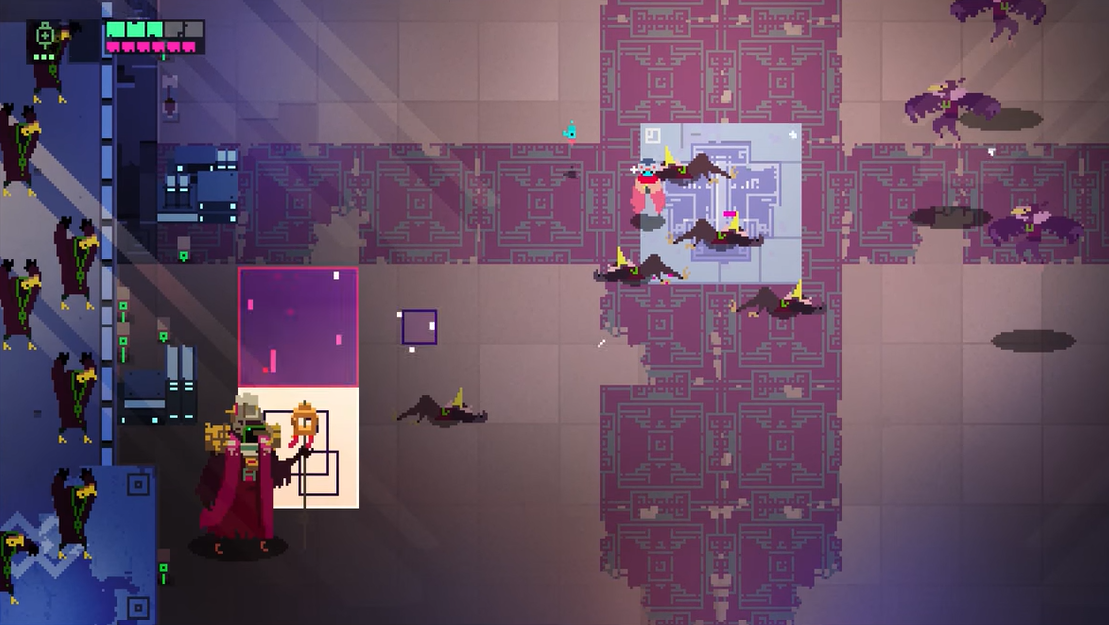 Of the four sections in the game, the North is arguably the easiest, but that doesn’t make it any less foreboding. While weaving through its cliffs and rising mountain paths, the game reveals the sad and grotesque corpse of a monster who appears fused to mountain you’re climbing up. It’s one of the game’s titans—unruly abominations from a bygone era who bring the game’s morbid fascination with mortality to the fore. I’ve seen the face of the one up North a handful of times and yet it always unsettles me. It fills me with sadness and reminds me that one day I’m going to die.

The meanest trick of all is how the North ends with me killing a majestic old bird mage and all of his friends. It’s unclear what he’s done to deserve it, but always feels like a necessary conclusion to the violence that pervades the mountain, a place I leave never wanting to go back to—until I inevitably do.