shadow of the tomb raidertomb raider
To sign up for our daily newsletter covering the latest news, features and reviews, head HERE. For a running feed of all our stories, follow us on Twitter HERE. Or you can bookmark the Kotaku Australia homepage to visit whenever you need a news fix.

Modern action-adventure games are pretty easy for me. They’re too easy, you might say, if you’d like there to be some mystery about where your cliff-climbing character should jump or which levers they should pull while trying to operate ancient machinery. Hints tend to come fast, as your hero will start muttering about solutions if you didn’t quickly come up with one. I wish these games would let me figure stuff out on my own.

I first heard about this feature in June at E3 when the game’s lead writer, Jill Murray, mentioned in passing that players can stop the game from putting colourful highlights on the ledges they need to jump on.

Early into playing Shadow of the Tomb Raider for a review last week, I found that setting and dialed it up to hard. It turns out there are three levels to it. They go from making exploration markings bold, then faded, then non-existent.

At the easiest exploration difficulty, climbable ledges have a coloured highlight. At a higher difficulty level, they don’t appear.

My colleague Tim Rogers captured a short video of Lara Croft entering a chamber three different times, each at a different difficulty level. You can see how much easier it is to know where to go in the easy setting than it is in the hard:

If you want to play the games without signposting and puzzle your way through things, raising the game’s exploration difficulty to hard is the way to go. I also recommend raising the difficulty for combat and puzzle solving. All three can be toggled independently, but in combination they make the game feel less like a tour and more like quest.

When you raise the game’s puzzle difficulty, you get fewer verbal hints about how to solve the game’s many challenge tombs. At the easiest difficulty, Lara and friends just tell you what the solution is. At medium or hard, they’ll mutter vague clues or none at all. You can hear the variations as part of this video from Tim about the game’s options:

Changing combat difficulty to hard removes some of the prompts you’d normally get about when enemies have spotted you. It also removes the handy colour cues that tell you which enemies aren’t in anyone else’s line of sight (they’re yellow) and which are (they’re red). Taking out a red-coloured enemy alerts another one, whereas taking out a yellow does not. Seeing the colour-coding helps with stealth play. Weirdly, even if you bump the settings up to hard, you can gain a skill that enables you to access the colour-coding view anyway, but I found that earning that skill rather than having it set by default felt better as I played. 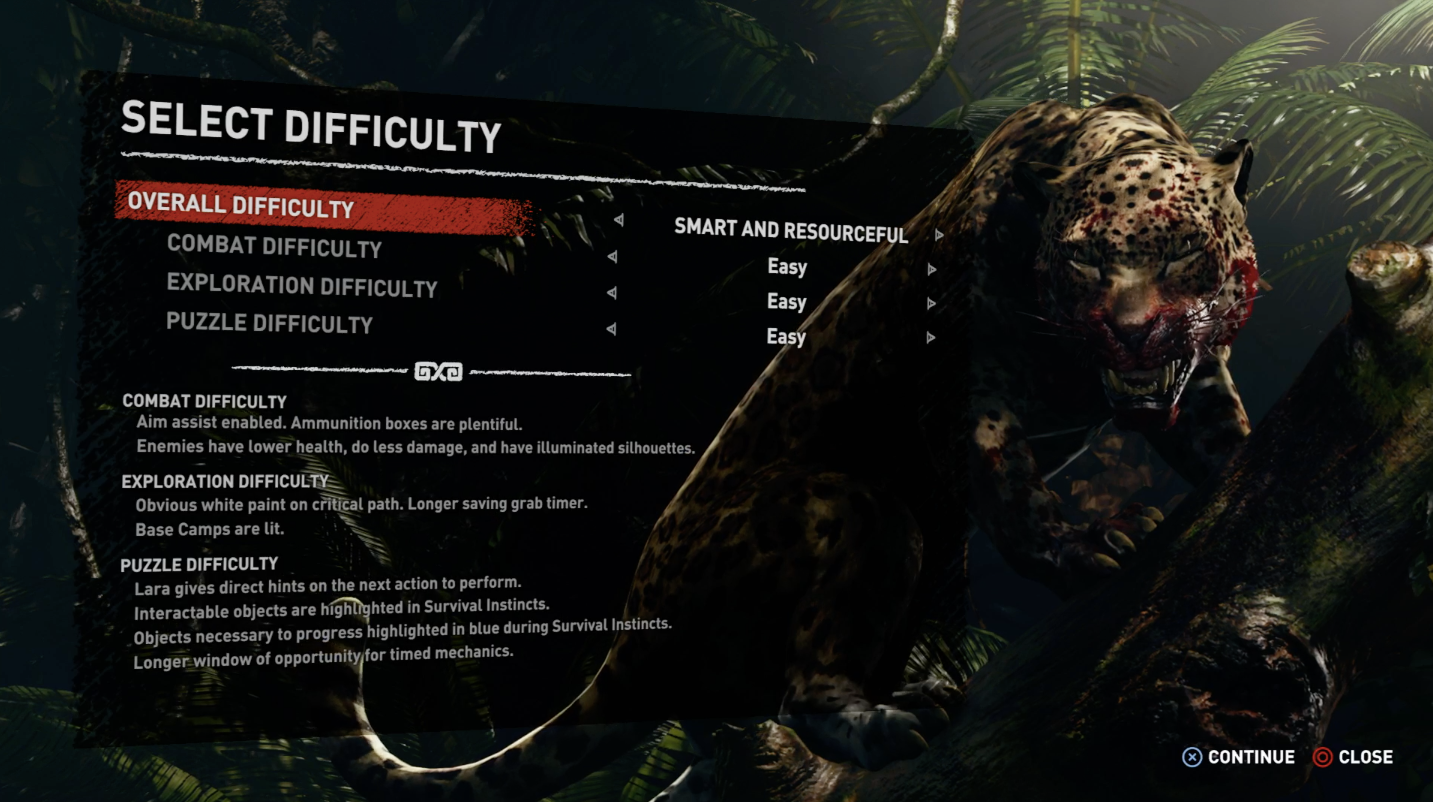 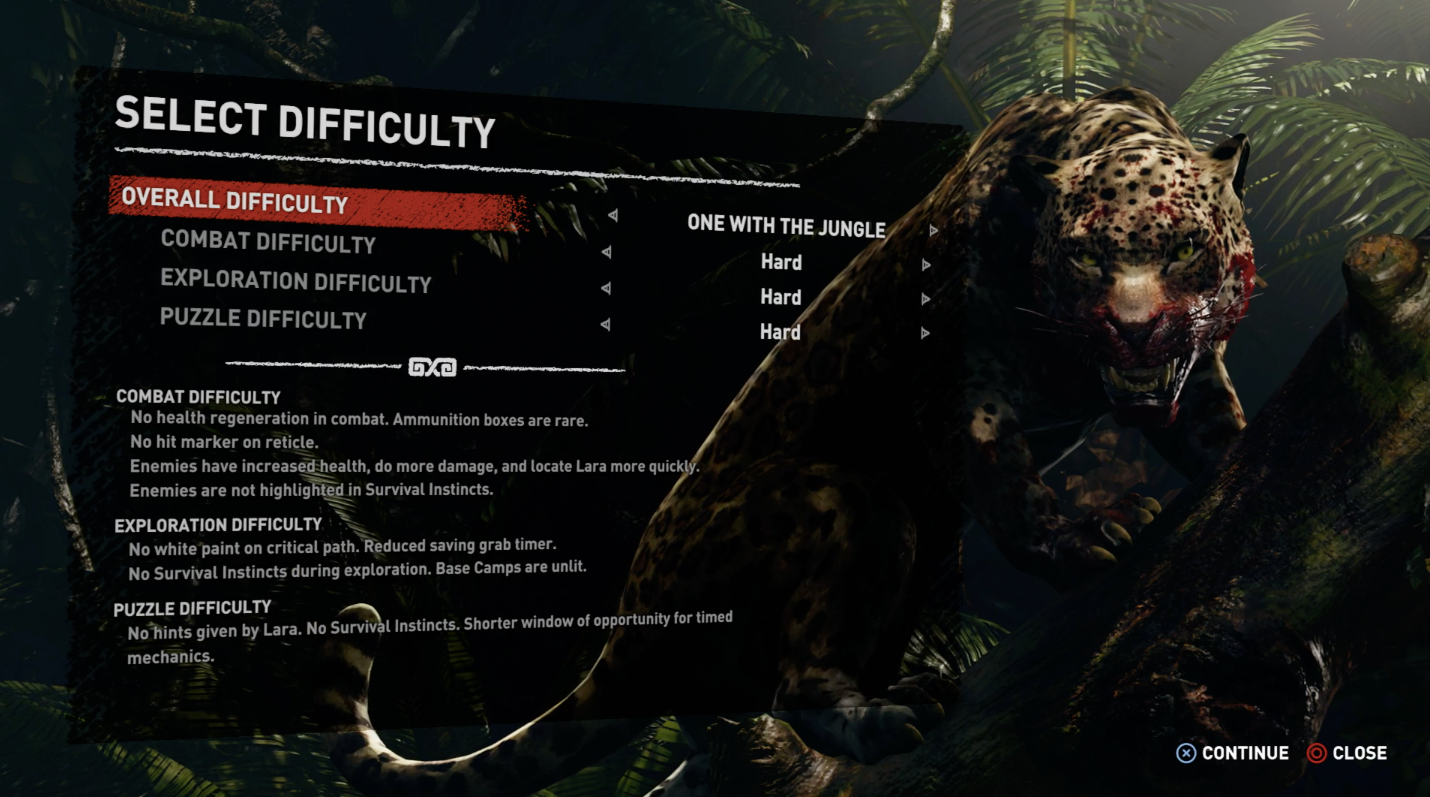 The game’s difficulty settings can be changed at any time, and I confess that there were a couple of times when I was stumped on a puzzle and toggled the difficulty back to medium for a hint. I tried to resist, though, because the game felt best and more rewarding when I allowed myself to be a little lost and overwhelmed. No shame to those who would prefer to play with any of these sliders set to easy. Choice is good!

There is one aspect of the game’s difficulty that can’t be changed. At the start, players can opt to go through Shadow at “Deadly Obsession” difficulty. The description for that difficulty setting, which dials all three sliders to “very hard,” has the same settings as when all are set to hard, with one change: the game removes any auto-saving, allowing players to only save at basecamps and requiring them to spend in-game resources to even light those basecamps. I haven’t tried that setting yet, but am intrigued. It sounds hardcore.

In addition to game difficulty, there are language settings that I also decided to tweak when I played. You spend most of the game in virtual Peru, where the dozens of characters Croft can talk to are native speakers of Spanish or Yucatec Mayan. By default, they’ll speak to Croft in English, but if you go into the game’s options menu and language sub-menu, you can turn “voice-over immersion” on. That makes most of the characters speak to you in their own language.

Croft, awkwardly, still speaks to them in English, and the people she talks to understand her perfectly. It reads as if she’s actually supposed to be talking to them in their languages and that we’re hearing her in English because that’s the only voice track we’ve got for her. It’s weird, but having the other characters speak in their own languages does help reinforce the idea that our explorer is out of her element.

Like many aspects of Shadow of the Tomb Raider, the game’s difficulty and language settings are a step forward for the series, but they’re not perfect. I liked dialling things up and changing the languages I heard, but I still saw room for improvement. If you play the game, I highly recommend making things tougher, but be warned, even at the hard difficulty, the game sometimes can’t help itself but prematurely give you an unneeded hint: 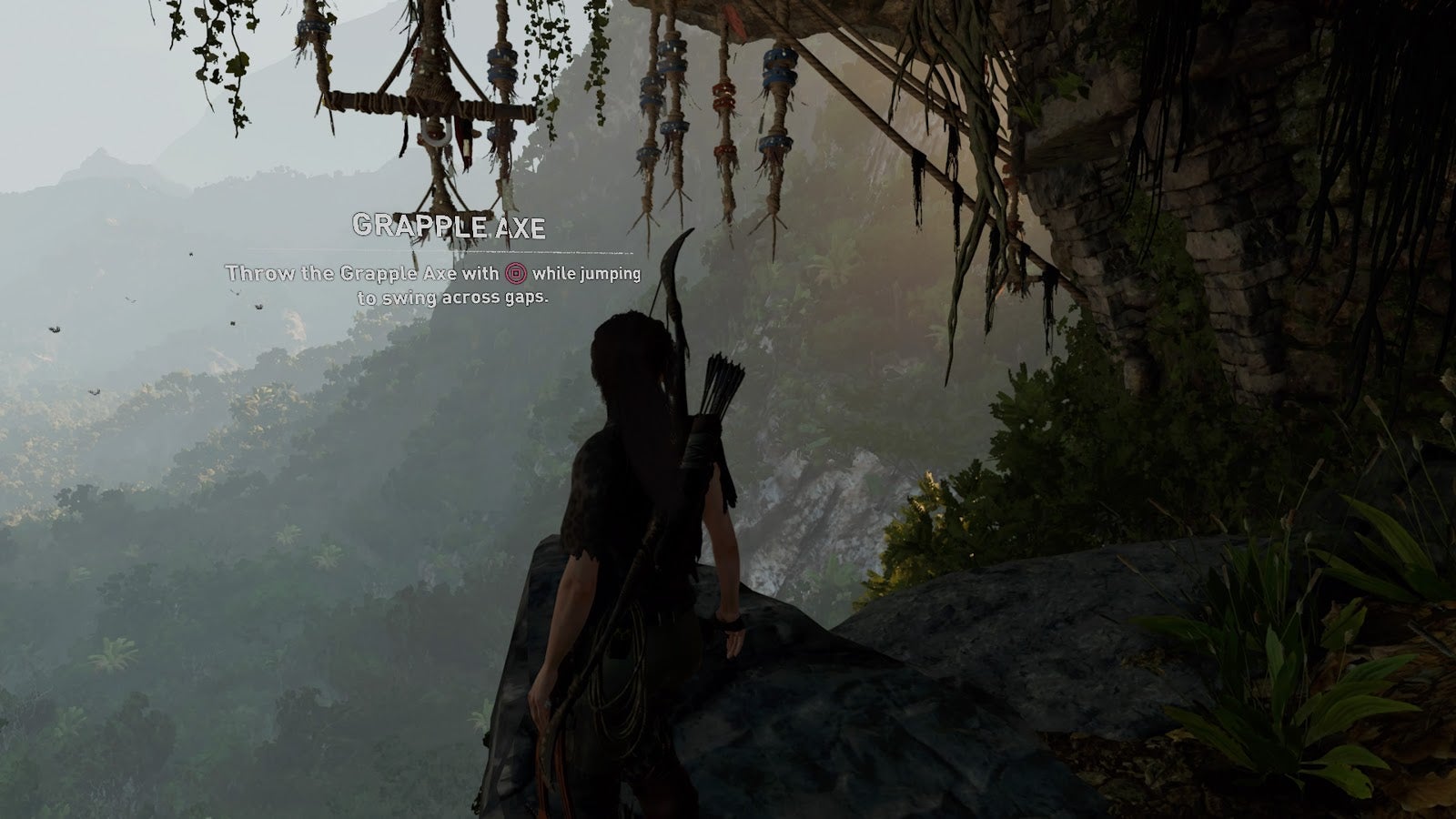