The Best Horror Game Weapon Is A Flashlight

horror gameskotaku coreluigi's mansionresident evilsilent hill
To sign up for our daily newsletter covering the latest news, features and reviews, head HERE. For a running feed of all our stories, follow us on Twitter HERE. Or you can bookmark the Kotaku Australia homepage to visit whenever you need a news fix.

What’s your favourite horror-game weapon? Pistol? Crossbow? Flamethrower? While I enjoy the feeling of security that comes from wandering a dark hallway with a spiked baseball bat in hand, I enjoy walking down a not-dark hallway even more. And so I would like to pay tribute to the oft-unsung MVP of the horror game protagonist’s arsenal: the humble flashlight.

While it wasn’t the first game to feature a flashlight, Silent Hill was the first to put it to startlingly effective use. Early on in the 1999 PlayStation game, Harry Mason finds a small clip-on light that becomes essential during his search for his missing daughter. Often, it is the only source of illumination at all, providing a very small area of light in the dark hallways and rooms of dilapidated buildings around town.

With it, you can see but a few feet in front of you. While this provides some sense of safety, it also heightens the sense of vulnerability, reinforcing the terrifying notion that there are things nearby—perhaps within arm’s reach—that you can’t see. (Not to mention that the flashlight attracts monsters.) Our fear of the unknown and what may be lurking in the darkness is a primal one, and Silent Hill exploits it all too well.

The flashlight became a staple of the series, alongside the radio and the horrible, twisted, fleshy creatures designed to induce nightmares and dry-heaves. Silent Hill 2 went so far as to make finding the flashlight a moment of atmospheric horror in itself.

Protagonist James Sunderland enters an apartment that is pitch black save for the beam of a pocket-sized light … that happens to be attached to a sweater just like the one his wife wore before she died. The dead wife who summoned him to Silent Hill.

That’s her outfit. In an empty, dark, run-down apartment. But you need a flashlight to navigate the buildings in this helltown, so you grab it and—

Doom 3 rebooted the beloved first-person shooter series, marking a stark departure from the frenetic, non-stop action of its predecessors. This disappointed many fans of the franchise, but not me. While I admit it’s got an over-reliance on monster closets, Doom 3 sure served up enough atmosphere and scares to satisfy my survival horror-lovin’ heart.

Much of this owes to the liberal use of darkness as Doom Guy travels throughout various Mars locations where things have gone hellishly FUBAR thanks to a teleporter mishap. 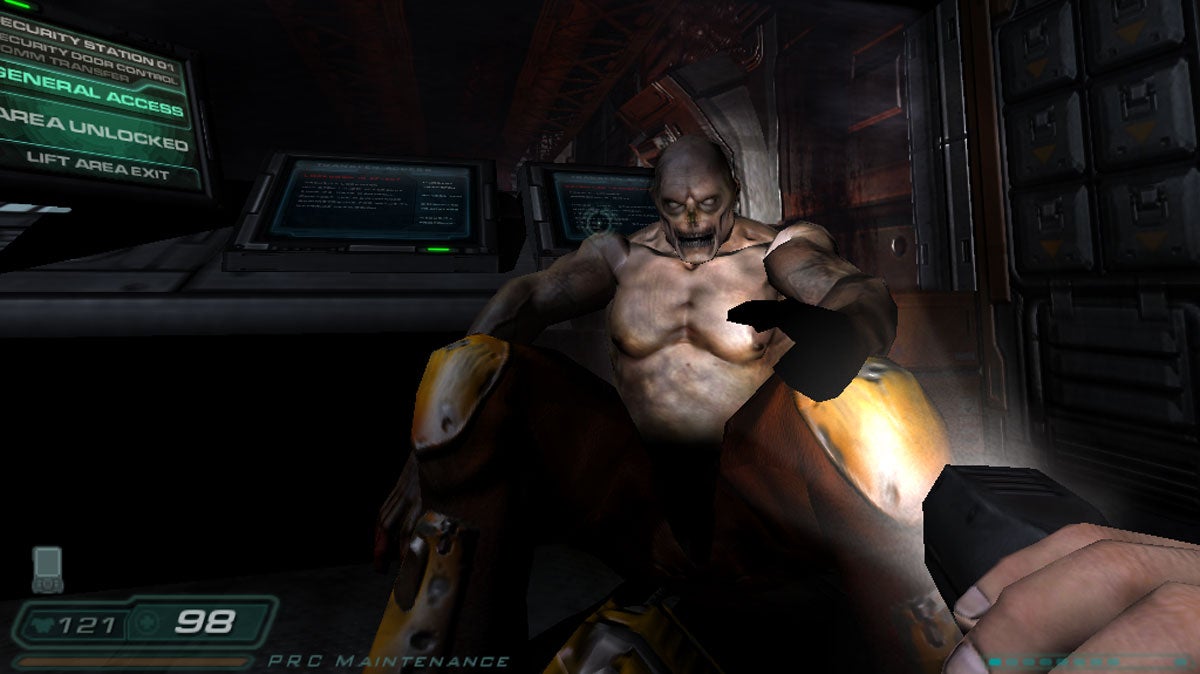 Moby Games)" loading="lazy" > Pretty rude to shine a light right in someone’s face, really, even if it is a topless monster. (Screenshot: Activision, Moby Games)

You may be armed to the teeth, but your stoic, silent Space Marine rarely feels overpowered. Guns don’t hit quite as hard as you’d like them to. And when the game was first released in 2004, players couldn’t use a weapon and the flashlight at the same time. It was one or the other.

You’d walk into a room, see a zombie shambling around on the edge of the light beam, and then you’d have to switch to your gun, plunging yourself into darkness once again and obscuring your vision. Enemies could approach you from all angles, even in rooms you’d previously cleared.

Forcing players to choose between seeing things and shooting things is a great way to jack up the tension, but you have to admit it’s a cheap tactic. Was there no adhesive tape in space? Would flashlight technology have devolved so much that there are no wearable lights in the year 2154? Mods soon solved the issue, as they often do, and when the BFG Edition of the game was released in 2012, the flashlight was finally armour-mounted.

Half-Life 2: Episode One and Resident Evil: Revelations 2 twist this “either/or” weapon/flashlight formula by simply adding a partner for the player. During “Lowlife” in Half-Life 2, Gordon Freeman and Alyx Vance must pass through a claustrophobic, deserted, zombie-filled underground during their escape from City 17.

Gordon, controlled by the player, is armed with a flashlight and a gravity gun, which can pick up items and launch them. Alyx, your AI-controlled partner, has an actual bullet-firing gun, but no light.

There are a lot of enemies, and it’s frequently very dark, especially when you’re forced to wait in the pitch black for the battery on your light to recharge. There are so many enemies that your gravity gun alone won’t save you, and it’s so dark that if you turn off your flashlight, Alyx won’t shoot and she won’t move. The two characters need to work together, pointing lights and gun barrels, to make it through the scary, stressful sequence.

The relationship between the two is brilliantly symbiotic, exactly what the Spice Girls sang about in their 1996 song “2 Become 1.” 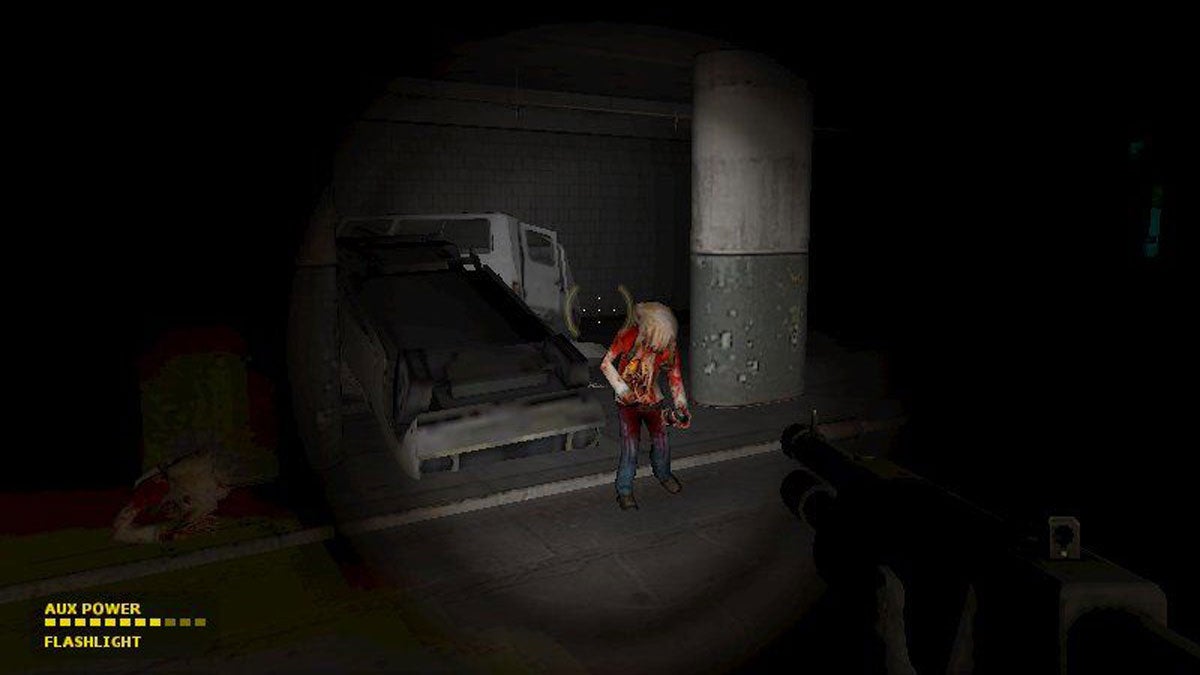 Resident Evil: Revelations 2 uses this same idea to lesser effect during the Claire Redfield portions of the game. Claire’s got the guns, while Moira Burton has two things at her disposal: a flashlight and foul language. The player can control either character while AI or another human controls the other. The flashlight isn’t always essential for navigation (and it might make for one slightly bored co-op player), but it’s still useful for blinding enemies and spotting items in the environment. 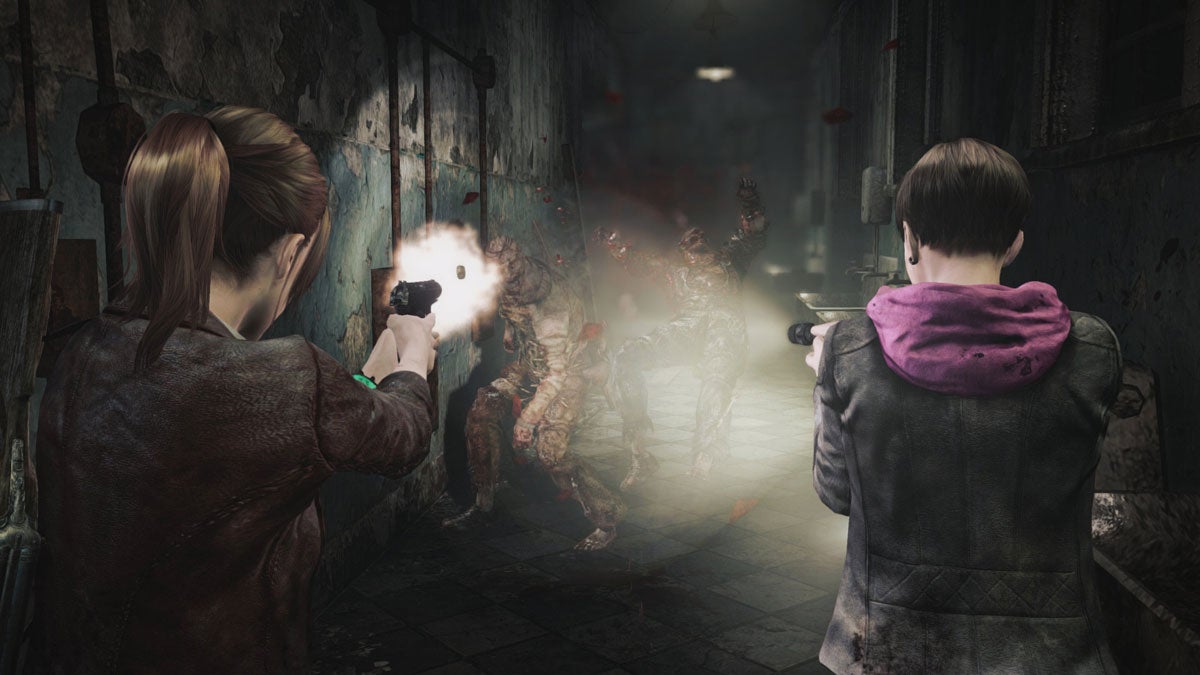 Of course, no conversation about flashlights in horror games would be complete without discussing Alan Wake. Some games, such as Doom 3, enable the flashlight to be used as a melee weapon in a pinch. Alan Wake, however, makes the torch an indispensable part of your arsenal.

Pulp thriller writer Alan Wake takes a vacation with his wife and agent, hoping the getaway will cure his years-long bout of writer’s block. Unfortunately, the bucolic mountain town of Bright Falls has been infested by the Dark Presence. This darkness is quite literal, as living beings and inanimate objects alike become “Taken,” coated in an ooey-gooey shadow. While the terminology is hackneyed, the gameplay approach is unique, with two items used in tandem. Players must first use the flashlight (powered with Energizer™ batteries, of course) to burn away the darkness.

Only then can enemies be damaged with standard weaponry. By the end of the game it’s less “clever novelty” and more “just another combat mechanic,” but Alan Wake’s creepiness persists nonetheless thanks to a pervasive atmosphere of dread. 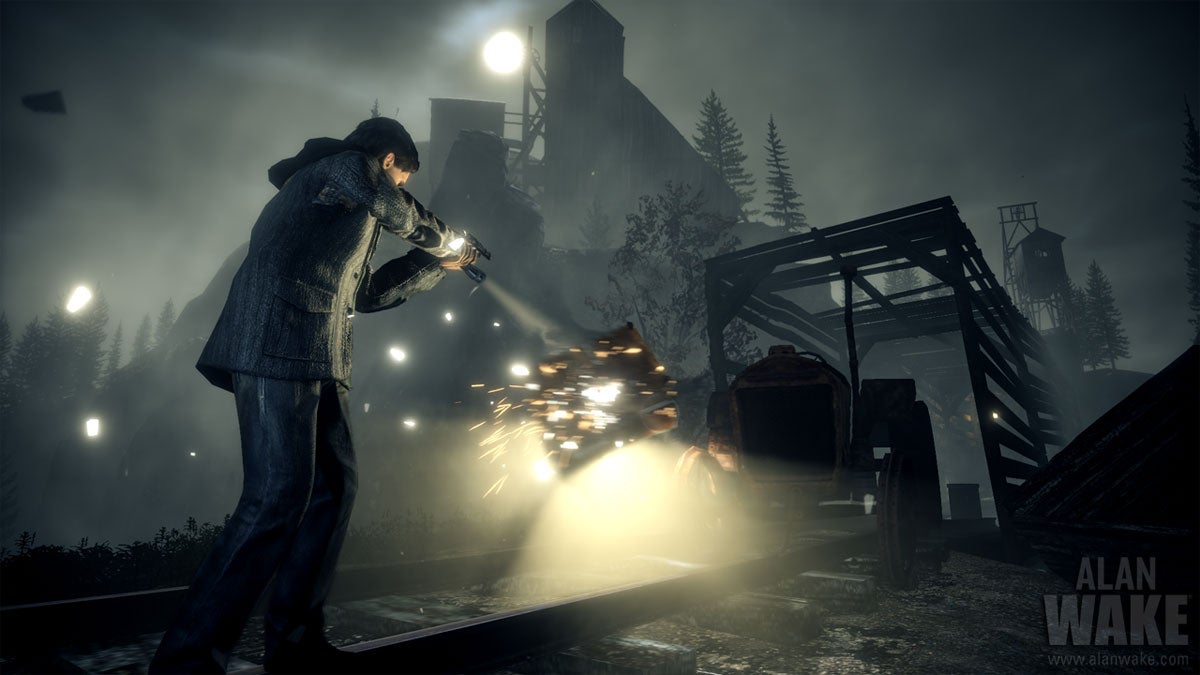 As fans and critics alike praised Alan Wake for its flashlight/weapon gameplay, poor Luigi (RIP) was once again relegated to second fiddle, despite having used a similar method for ghost bustin’ in 2001.

The ghosts of Luigi’s Mansion were weakened when hit with a beam of light, then defeated with a special vacuum cleaner. Perhaps this is the greatest use of a flashlight in gaming: I mean, ridding your house of vengeful spirits and dust bunnies all at once is an incredible time-saver.

And so, the next time you play a horror game, as you revel in the roar of your chainsaw or the splatting a zombie’s head with a hammer like it’s a watermelon and you’re Gallagher, please give a moment’s thought to the humble, noble flashlight. Whether wearable or hold-able, everlasting or rechargeable, the flashlight is there for you, to make you feel safe when you’re anything but.

When you hear some kind of noise in the dark and you worry it’s a monster, it will be your flashlight that casts away that darkness and confirms it, which may not be soothing but it is helpful. Cling to your flashlights, horror game players, and you’ll make it through the gloom. Maybe.

Stacie Ponder is a writer, artist, gamer, and swamp hag best known for her long-running horror blog Final Girl (www.finalgirl.rocks) and her love of pizza.